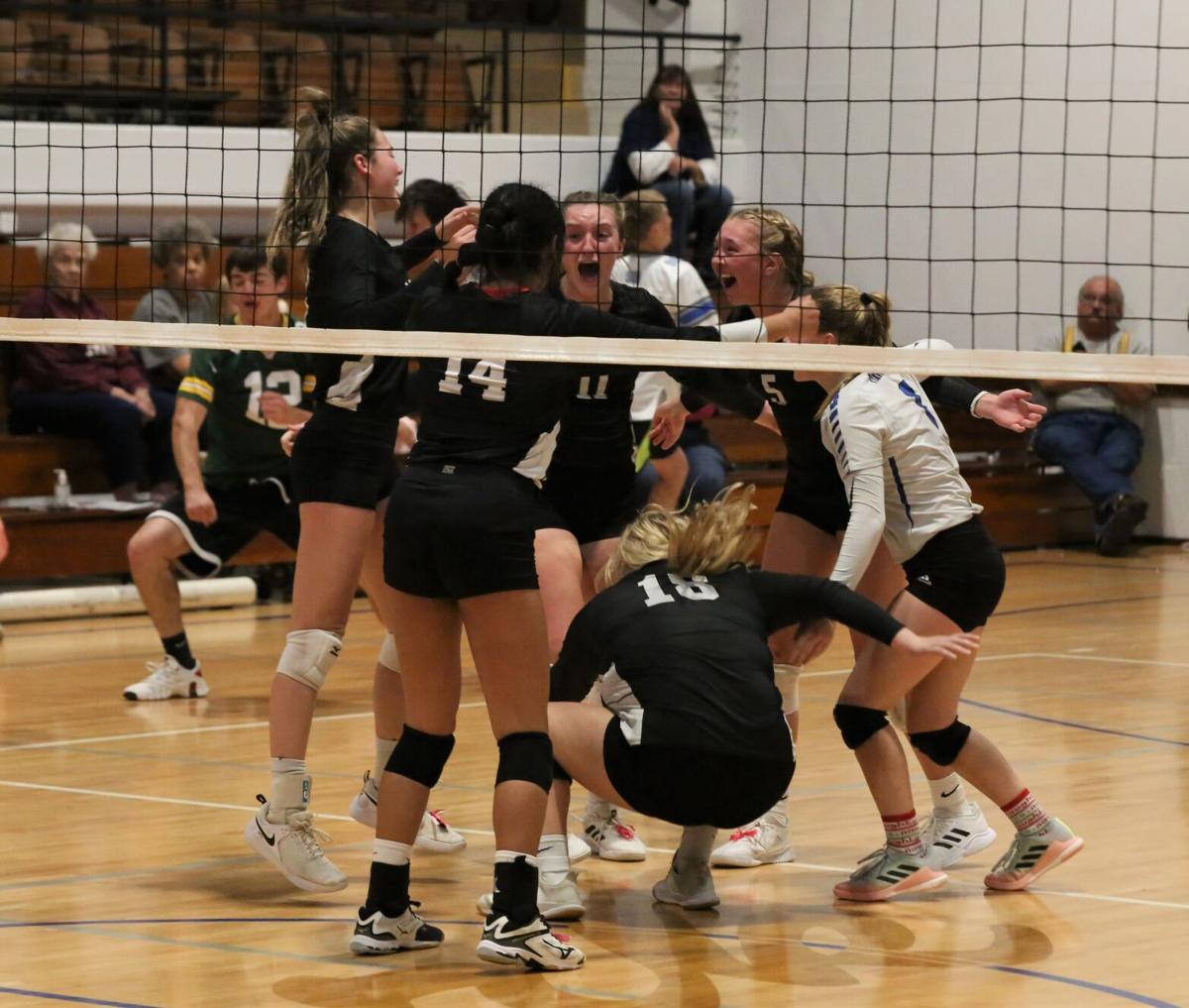 Just seconds after Malorie Staskal hammered the final kill for the 15-10 win in the fifth set, the Exeter-Milligan Timberwolves celebrated their Crossroads Conference Tournament championship over BDS. 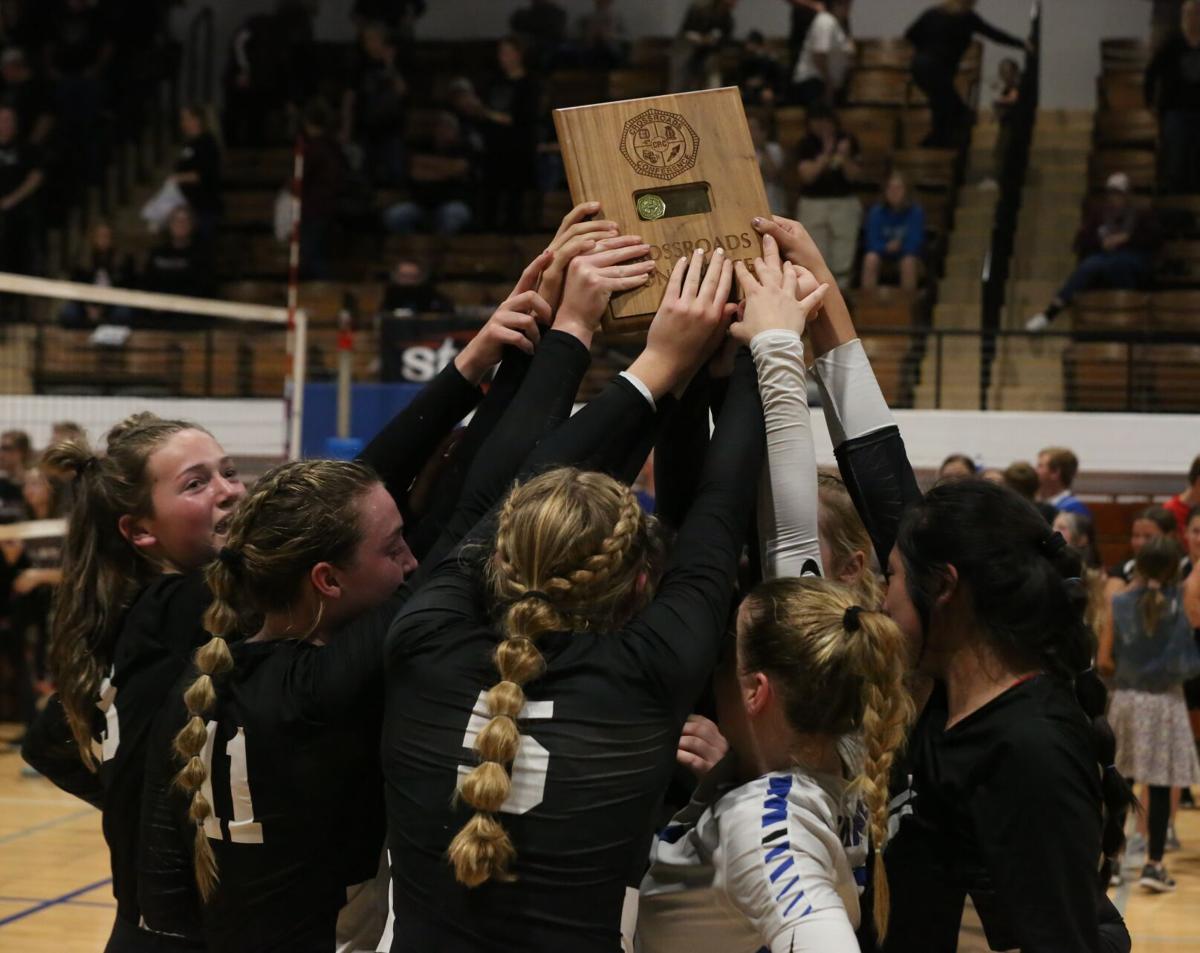 The Timberwolves hoist the CRC Championship plaque after a 3-2 win over the BDS Eagles, their first win over the Eagles in three tries this fall season.

The Exeter-Milligan Timberwolves and the Bruning/Davenport/Shickley Eagles had battled each other twice during the course of the regular season, with BDS coming away with wins in both matches.

Tuesday night, at the York City Auditorium it was the third and final match of the year with the Crossroads Conference Volleyball Tournament Championship on the line.

It was what ESPN calls an “Instant Classic.”

Exeter-Milligan, 17-10 and ranked No. 7 in the Omaha World-Herald D2 volleyball rankings, looked to be in trouble. After losing a close first set, the Eagles jumped to a 14-4 lead in the second and it appeared it was going to be a quick night.

Exeter-Milligan head coach Madalynn Fousek talked about the mood of the team in the huddle during a time out in the second set.

“The girls believe in each other and even though we were down by quite a few points, they just kept fighting and never gave up,” said Fousek. “We were a little flustered obviously, but I just told them to relax and just work together as a team.”

“Senior leadership is what won us the game. They were awesome out there just calming everybody down and keeping the team level headed when things didn’t look to good,” Fousek added. “

After Exeter-Milligan won the fourth set to push the match to the limit, the Timberwolves came out and jumped to a 6-3 lead prompting BDS head coach Kari Jo Alfs to use one of her time outs.

The Eagles responded as two attack errors and a kill from freshman Hayley Sliva tied the match at 6-6. BDS took their final lead when senior Mariah Sliva posted an ace serve to make it 7-6.

Exeter-Milligan went on a 6-0 run to open a 12-7 lead as Malorie Staskal hammered a kill for one of her eight in the match. Savana Krupicka scored another winner and the Timberwolves had the Eagles on the ropes.

Back to back winners from the Eagles’ Taylor Sliva for two of her 12 in the match cut the Timberwolves’ lead to 12-9, but a rocket off the right arm of senior Cameran Jansky, one of her 23 of the night, made it 13-9.

BDS tipped the ball into the net to make it 14-9, but the Eagles fought off the first match point when a tip was called wide making it 14-10.

On championship match point number two, senior Emma Olsen put the ball out to the right side and 5-11 sophomore Staskal found the open court starting the Timberwolves celebration.

With the post-season less than a week away, Fousek said this win gives this team all the confidence it needs.

“Before the game started I told the girls we have to control what we can control. You make an error you can’t control that anymore, just go get the next ball,” Fousek stated. “Our confidence has skyrocketed right now. This win puts us in a real good place and we are hitting our peak at just the right time.”

BDS finished the match with 53 kills. Mariah Sliva was the team leader with 20, Taylor Sliva added 12 and Malory Dickson chipped in with 10. The Eagles had seven ace serves and five blocks.

The Timberwolves capped their championship with 46 winners. They had seven ace serves with junior Jozie Kanode the team leader with three and Jansky had four of the team’s eight blocks.

The Timberwolves will host Shelby-Rising City in the season finale Thursday night.

YORK – As the calendar approaches the end of November, the high school boys’ basketball season draws near. The first area teams tip off their …

Steven M. Sipple: It all feels far too predictable as Nebraska falters late in season finale

It's easy to imagine Kirk Ferentz telling his Iowa players to keep pressing Nebraska because the Huskers will make critical mistakes.

YORK – The high school girls’ basketball season is just around the corner, with the first area teams set to tip off their year on Thursday, De…

Italian student getting a kick out of McCool

MCCOOL JUNCTION – Before Giuseppe Cucchi came to the United States to attend McCool Junction High School for the 2021-2022 school year, he had…

Sports bettors dream: 86 able to bet on game after it ended

Second-half swoon drops YC women in loss to Friends U.

Just seconds after Malorie Staskal hammered the final kill for the 15-10 win in the fifth set, the Exeter-Milligan Timberwolves celebrated their Crossroads Conference Tournament championship over BDS.

The Timberwolves hoist the CRC Championship plaque after a 3-2 win over the BDS Eagles, their first win over the Eagles in three tries this fall season.