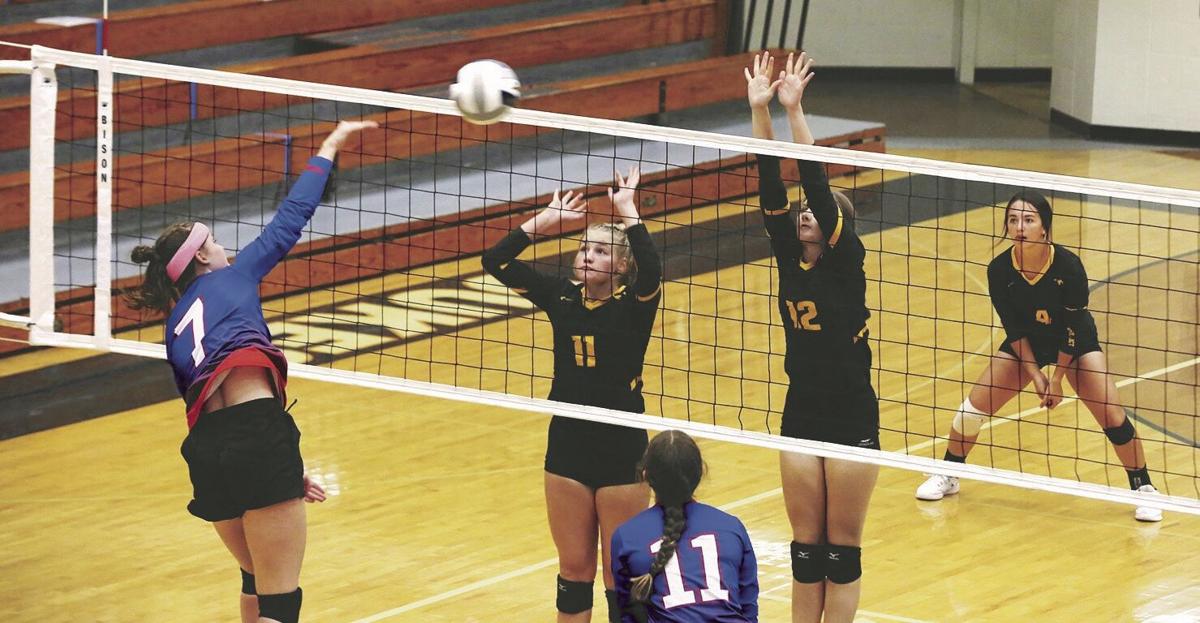 High Plains junior Kenzie Wruble (7) is on the attack against the McCool Junction block of Brooke Schulz (11) and Lana Rea (12). 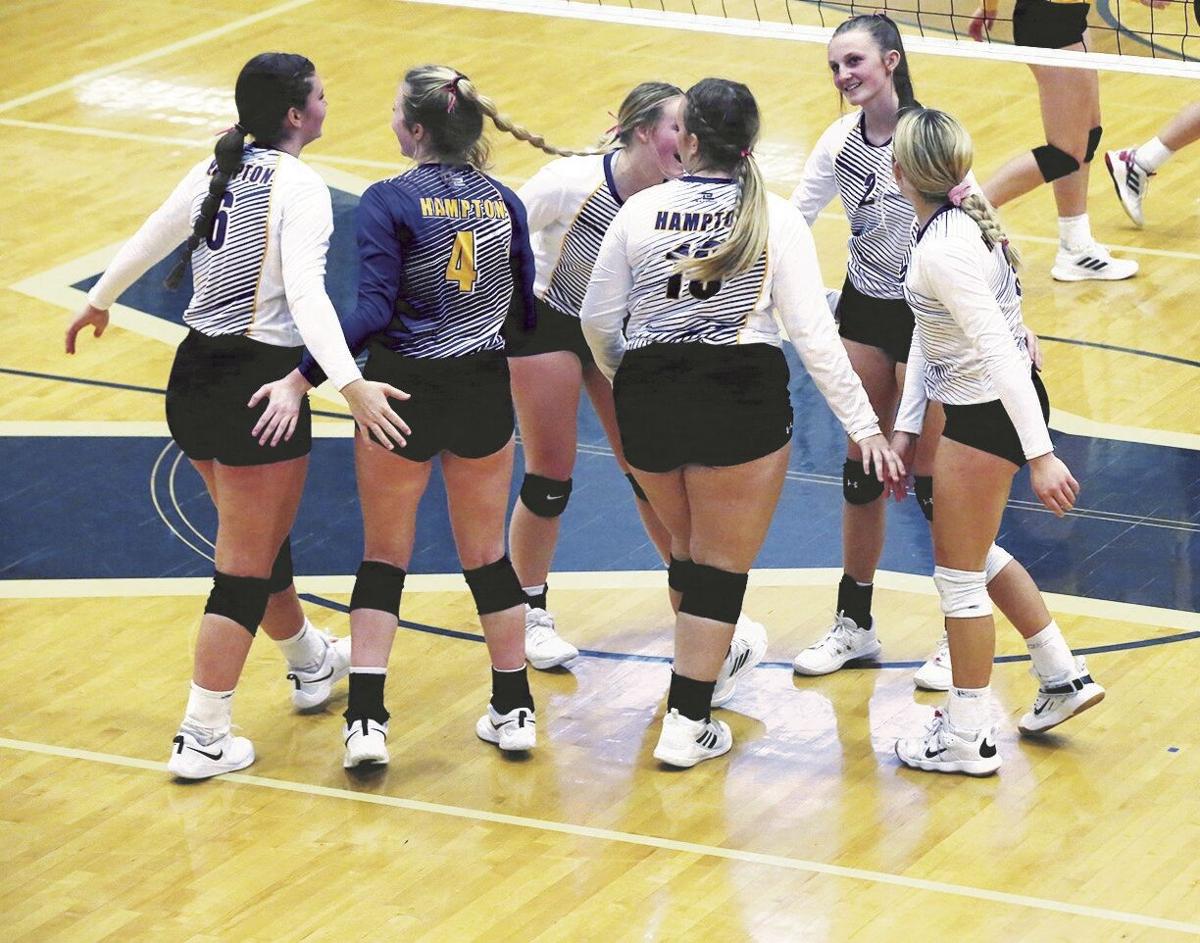 The Hampton Hawks celebrate their first set win over the Shelby-Rising City Huskies on Saturday at York High School. SRC would go on to win the next two games and advance to the quarterfinals. 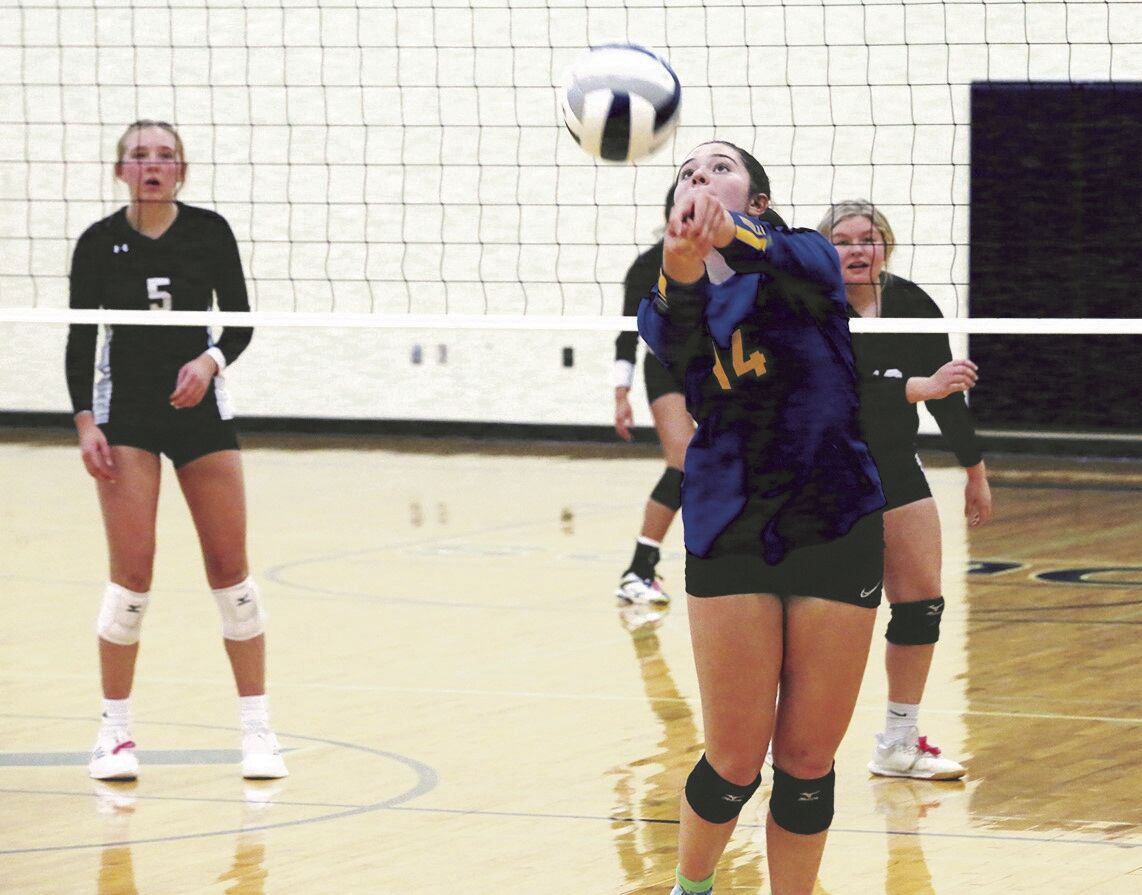 Nebraska Lutheran freshman Becca Hueske (14) is able to keep the ball in play in the Knights matchup with Exeter-Milligan in the quarterfinals.

YORK – The Cross County Cougars and the Exeter-Milligan Timberwolves met earlier this season with the Timberwolves winning the match 2-0 on the Cougars’ home court.

Monday night the stakes were much higher as the T-Wolves were looking to make the finals of the Crossroads Conference Tournament and the Cougars were out to defend their 2020 championship.

The teams split the first two games with EM winning 25-23 and the Cougars taking the second set 25-17.

The Timberwolves won the third 25-17 and needed extra points to advance to the championship with a 27-25 win in the fourth set.

In the early going the Cougars were very aggressive at the net with their attack as they had 21 kills over the first two sets to just 16 for the Timberwolves.

The Cougars grabbed the momentum in the second set and the Timberwolves found themselves staring at a 3-4 point differential most of the set. Cross County maintained and extended their lead for the win.

In the third set, Timberwolf senior Cameran Jansky had six of her game high 18 kills.

The fourth set could have gone either way.

Lemburg led the Cougars’ 40 kill attack with 14 winners, while senior Chloe Sandell added 10 and Lilly Peterson chipped in with nine.

The T-Wolves finished with 37 team kills unofficially with Malorie Staskal adding six to Jansky’s 18 and Savana Krupicka had five including the winner that gave the Timberwolves a fourth match point at 26-25.

EM had five blocks with two from Jansky. CC was charted with seven as Sandell had three.

The T-Wolves had nine aces with three from Jansky and two from Jasmine Turrubiates.

Cross County 20-10, finished with four aces as a team.

BBS came into the CRC semifinals with a 2-0 and 3-0 win over the 19-5 Meridian Mustangs already this season.

BDS (22-4) is rated as the No. 5 team in Class D1 by the Omaha World-Herald and got all they wanted from the Mustangs and a little bit more on Monday in the CRC semifinals. But when all was said and done it was still a 3-0 sweep.

BDS won the first set 25-23, but the Mustangs had their chances and in the second set Meridian led most of the set by as many as four points. But BDS kicked it up a notch and won the third set 25-22 after trailing 20-16.

After two close calls the Meridian Mustangs just couldn’t get anything started in the third set and made several errors and the BDS defense didn’t let anything hit the floor. Through the first 18 points, a 16-2 BDS lead, the Mustangs had not recorded a kill after 18 through the first two sets.

BDS finished the night with 28 team kills led by senior Taylor Silva with 11 and Mariah Silva with nine.

The Eagles posted five ace serves with two from Ashley Schlegel and they had six blocks, three of those from Malory Dickson.

Meridian had 19 team kills, just one in the final set. They were led by Jalal Stewart with nine and Kim Schroeder with seven.

The Mustangs had four aces and finished with four blocks.

BDS will take on the Exeter-Milligan Timberwolves tonight, following the third place game between Cross County and Meridian. That game is scheduled for 6 p.m.

STROMSBURG – The Cross County Cougars came out firing on all cylinders in their season opener Thursday night, outscoring the McCool Junction M…

The four-year starting quarterback and only three-time captain in school history is entering his name into the NCAA’s transfer portal.

RALSTON – Last season, the York Dukes hammered the Ralston Rams 84-11 at home to open the season. This year, the return trip was more of the s…

Mickey Joseph, a Husker quarterback in the late ‘80s and early ‘90s who's spent the last five years on LSU's staff, is finalizing a deal to become Nebraska's new wide receivers coach.

High Plains junior Kenzie Wruble (7) is on the attack against the McCool Junction block of Brooke Schulz (11) and Lana Rea (12).

The Hampton Hawks celebrate their first set win over the Shelby-Rising City Huskies on Saturday at York High School. SRC would go on to win the next two games and advance to the quarterfinals.

Nebraska Lutheran freshman Becca Hueske (14) is able to keep the ball in play in the Knights matchup with Exeter-Milligan in the quarterfinals.