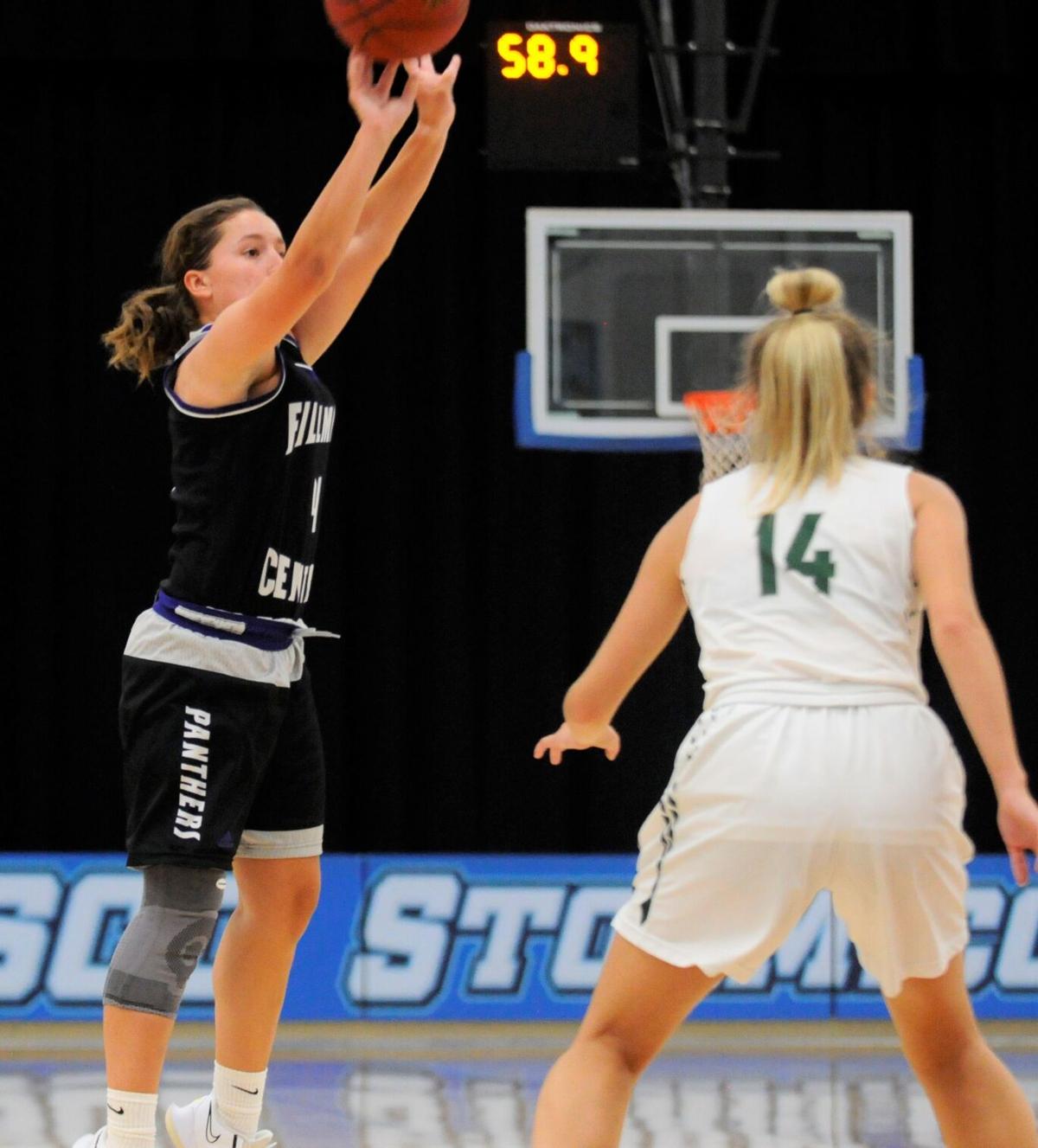 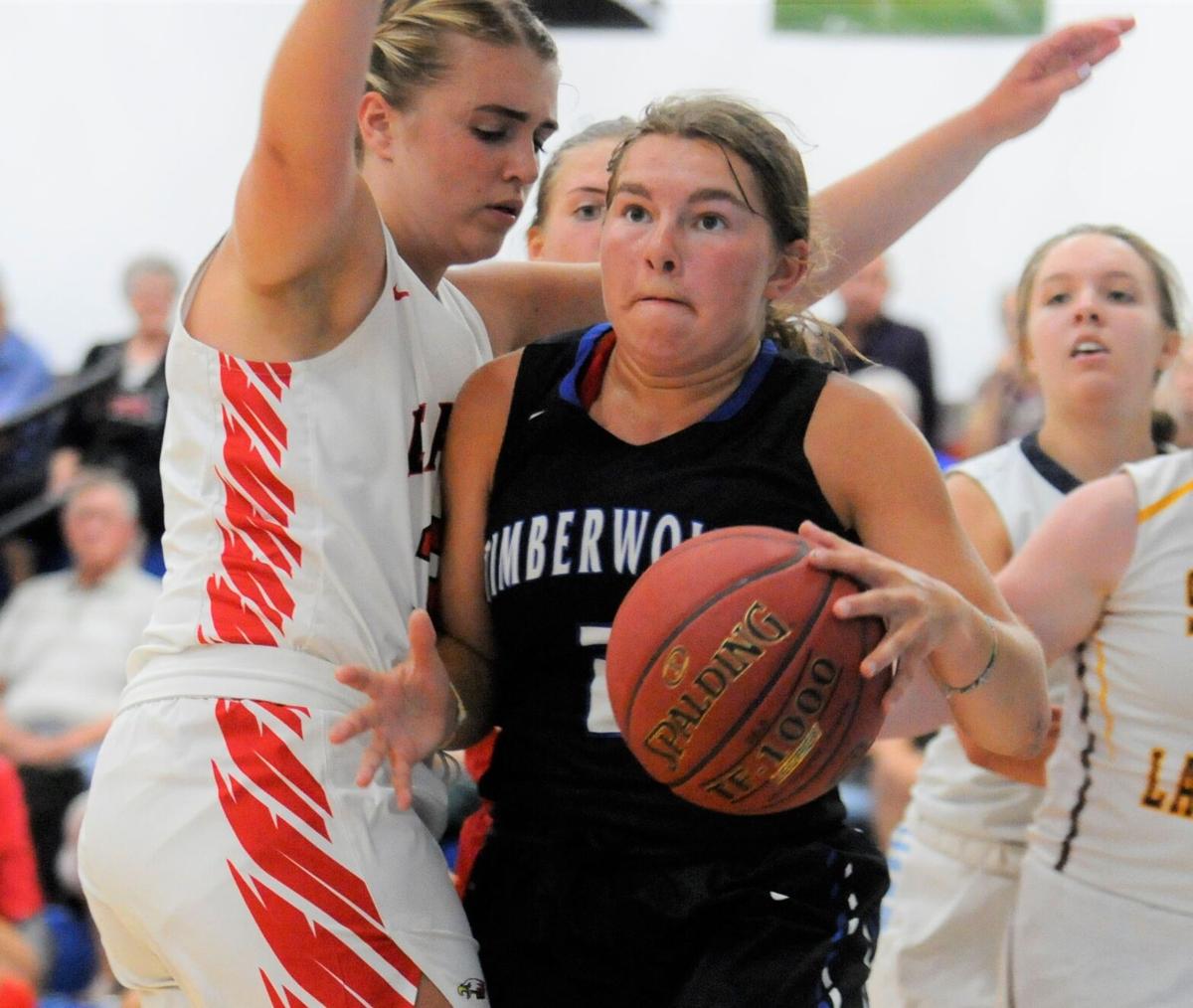 Exeter-Milligan’s Jaiden Papik gets boxed in on the baseline during Saturday’s Southeast Nebraska All-Star Game at the Truman Center on the SECC Campus. Papik finished with four points.

BEATRICE - The East All-Stars trailed 48-37 after three quarters in Saturday's Southeast Nebraska Girls All-Star Basketball game, but would come back to win 57-54.

The East fought back to tie the game 53-53 when Kaylee Klover of Southern scored with 2:20 left in the fourth quarter.

Zadie Plager of Johnson County Central then knocked down a 3-pointer with 1:01 left to give the East its first lead since the beginning of the opening quarter.

With 24 seconds, Norris' Maddy Collier made one of two free throws to make it 57-53. The West team made a free throw with 12 seconds left to make it a three point game, but the East would hold on for the win.

Mak Hatcliff of Beatrice was named the game's most valuable player. She had 10 points, seven rebounds, seven steals and one assist in the game. The MVP was voted on by coaches in attendance as well as media.

Jordan Koehler of Johnson-Brock had 14 points and 13 rebounds in the game. Katilyn Glathar of HTRS had eight points and six rebounds while Taylor Anderson of Freeman had six points. Eryn Snethen of Falls City and Maddy Collier of Norris had five points each.

The coaches of the East team were Karmen Tomek and Macie Coffey of HTRS.

The West was led by Hannah Kepler of Milford, who had 12 points and five rebounds while Asia Nisly of Centennial had 11 points and three rebounds.

Jackie Schelkopf of Fillmore Central had six while Jaiden Papik of Exeter-Milligan, Hannah Newton of Crete and Nevaeh Honea of Wilber-Clatonia netted four each.

Daylee Dey of Centennial, Hannah Holtmeier of Tri County and Chloe Souerdyke of Thayer Central had three points apiece while Ellie Ohlde of Fairbury and Abby Houk of Milford had two each. Ohlde also pulled down eight rebounds while Souerdyke had seven.

Other members of the West team included Dayvie Perrien of Sutton and Jordan Tracy of Fairbury.

The West team was coached by Jake Polk of Centennial and Erin Saathoff of Thayer Central.

The game was played Saturday at the Truman Center on the campus of Southeast Community College in Beatrice.

PALMER - The 2021 Class C State Baseball Tournament opened over the weekend and the Shelby-Osceola-Stromsburg Rebels split their first two games.

US swimmer Andrew goes maskless behind scenes at Olympics

Michael Andrew, who made waves for saying he wasn't vaccinated against COVID-19, didn't wear a mask behind the scenes after swimming his final.

YORK - Over the past several years the York News-Times sports staff has broken down the top returning area football players by position.

Why Olympians bite their medals and what they do with them

The sight of a jubilant Olympian standing atop the podium after being victorious in their discipline with a gold medal between their teeth is an iconic one. But why?

Exeter-Milligan’s Jaiden Papik gets boxed in on the baseline during Saturday’s Southeast Nebraska All-Star Game at the Truman Center on the SECC Campus. Papik finished with four points.