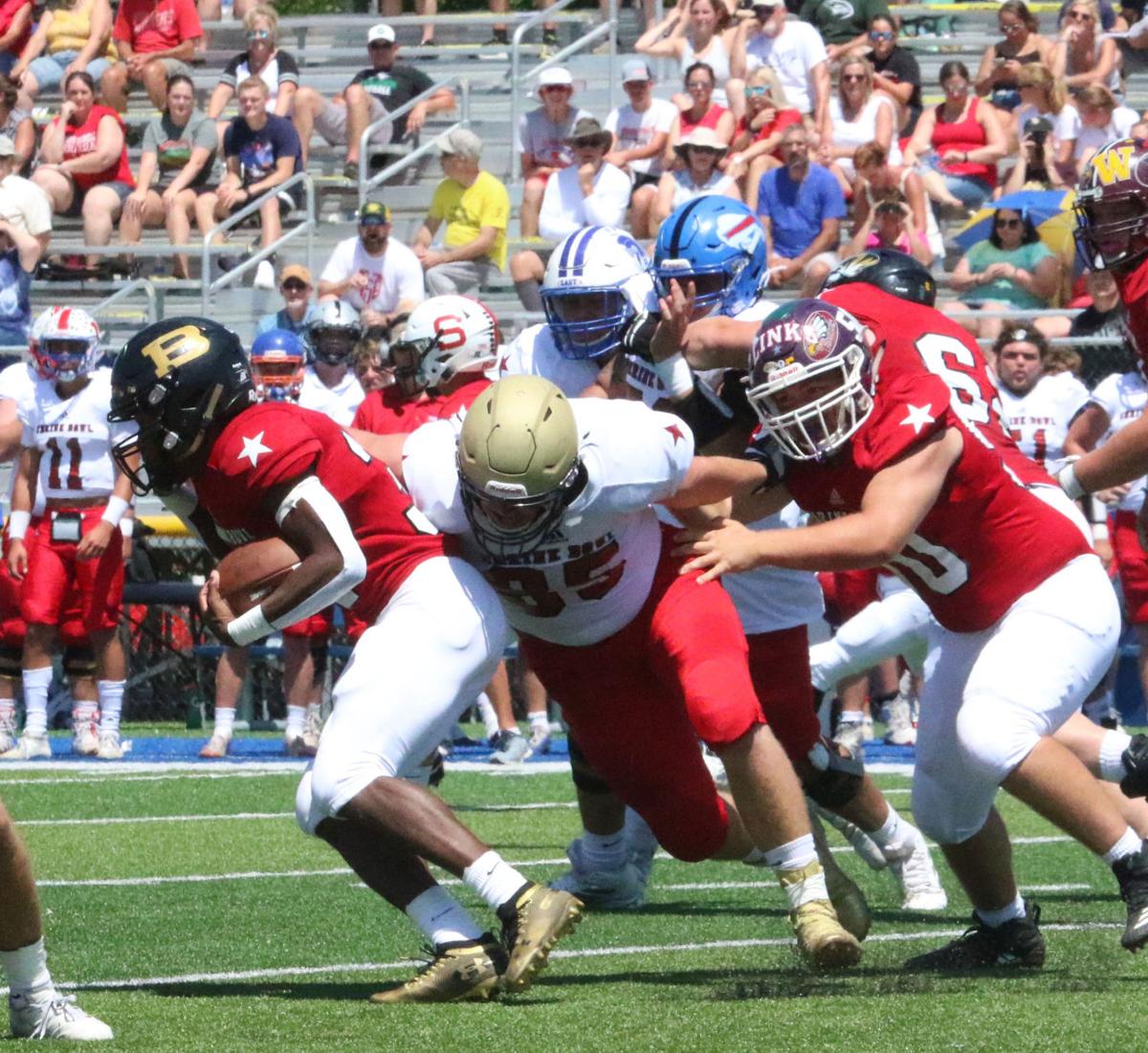 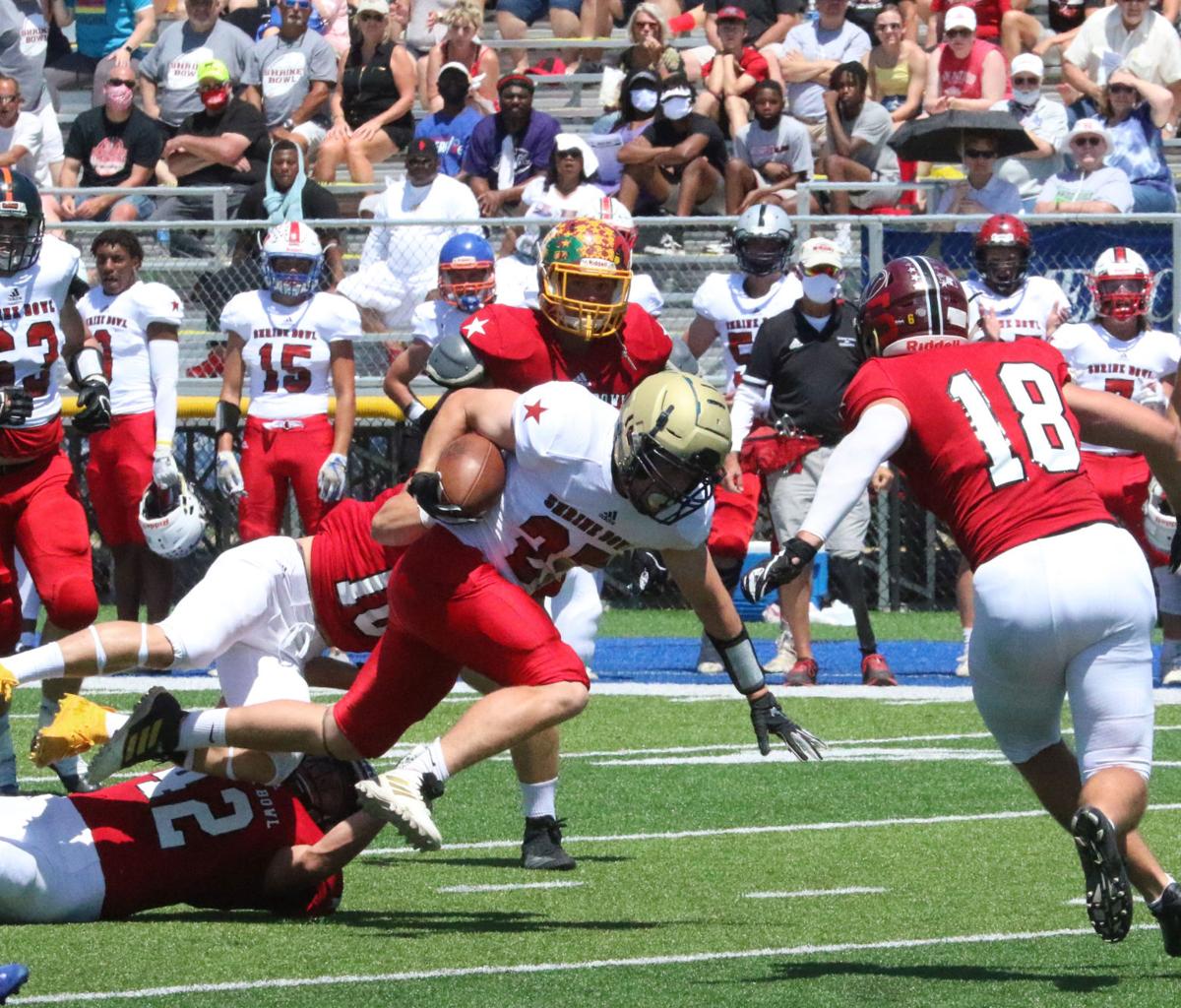 In the second quarter of Saturday’s Shrine Bowl game, York’s Jacob Diaz (25) breaks through the opening in the North defense for a 14-yard run that kept the South’s scoring drive alive. 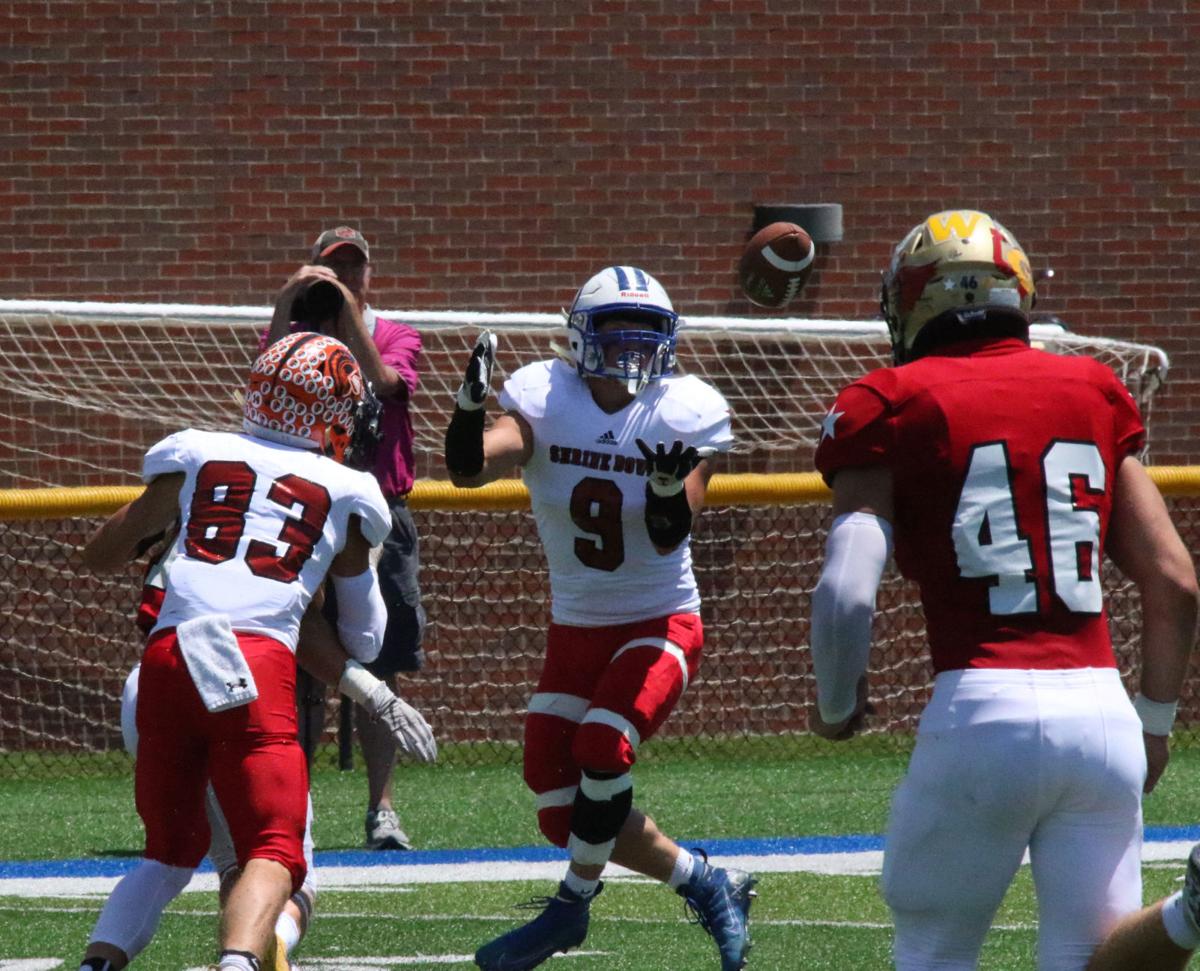 On the second play from scrimmage, Centennial’s Davon Brees (9) hauls in a swing pass and picks up four yards for the North offense. Brees is headed to Morningside in the fall. 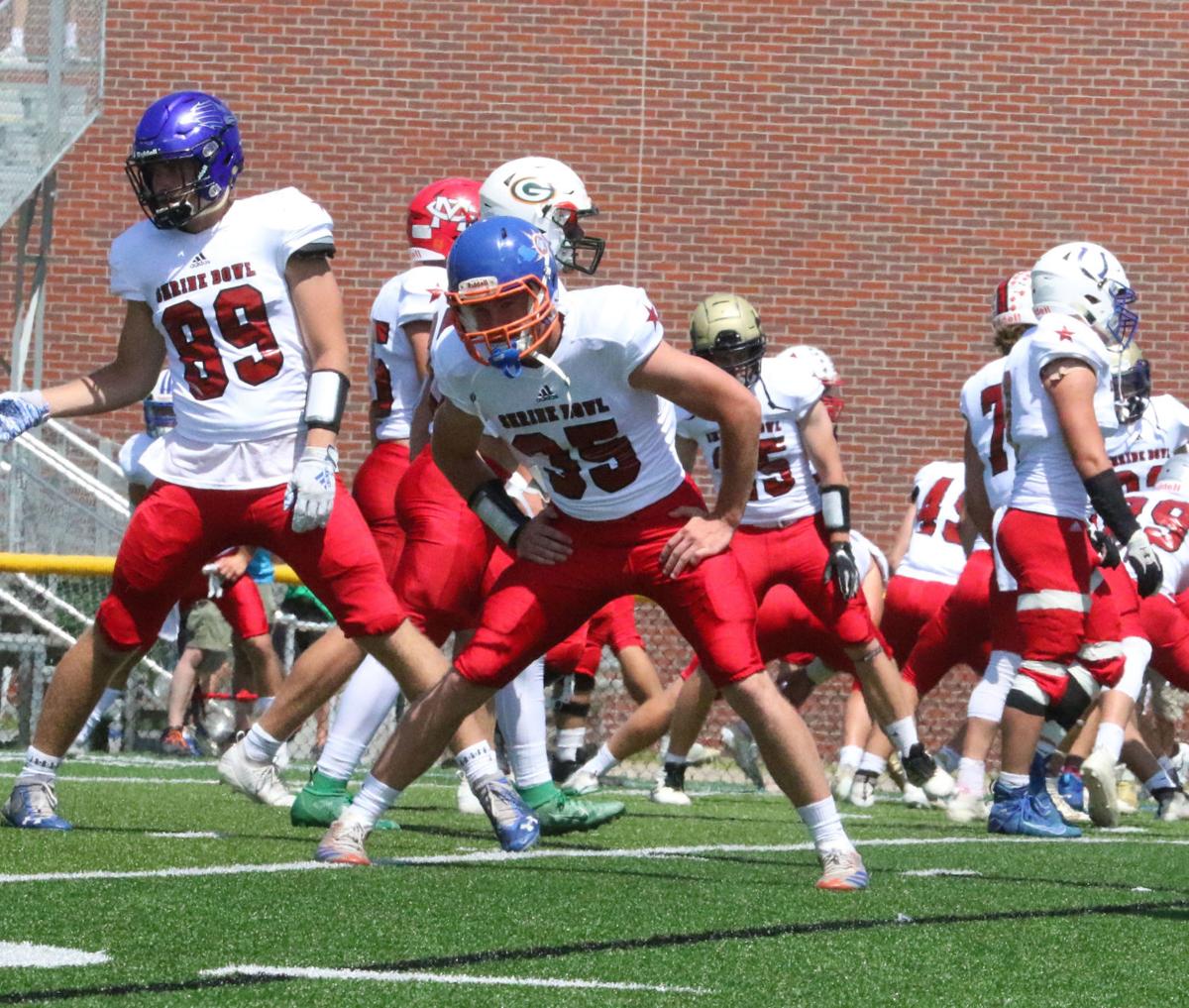 Osceola/High Plains Keaton VanHousen (35) stretches during halftime of the Shrine Bowl on Saturday. VanHousen’s time on the field was limited due to his hamstring acting up.

In the second quarter of Saturday’s Shrine Bowl game, York’s Jacob Diaz (25) breaks through the opening in the North defense for a 14-yard run that kept the South’s scoring drive alive.

On the second play from scrimmage, Centennial’s Davon Brees (9) hauls in a swing pass and picks up four yards for the North offense. Brees is headed to Morningside in the fall.

Osceola/High Plains Keaton VanHousen (35) stretches during halftime of the Shrine Bowl on Saturday. VanHousen’s time on the field was limited due to his hamstring acting up.

York’s Beau Woods and Jacob Diaz, along with Centennial’s Davon Brees and Osceola/High Plains Keaton VanHousen all competed on the South team who won the game 30-6.

The game was originally scheduled for early June, but the COVID-19 pandemic set the game back a little over a month.

An estimated crowd of 1,500 people were in the stands to see the first football game in the United States since March. The Nebraska Shrine Bowl was four hours ahead of the Wabash Valley All-Star Game played in Terre Haute, Indiana also on Saturday.

Both Woods and Diaz shared how much they enjoyed being part of the game and representing the kids.

“Obviously the game part is amazing, but it’s really all for the kids and the Shrine Hospitals and that made it special,” Diaz said. “I’m so glad that I got to represent them in the game and be out on the field will all these great athletes and play the sport that I love.”

Woods also shared his thoughts on being a part of something so special.

“Today was amazing, it was a lot of fun to be able to come in here and represent York, the state and the kids from the Shriners Hospitals,” Woods stated. “This is what it’s all about and the game is just a small part of that.”

While the North drove 59 yards on their first possession following a South punt to open a 6-0 lead, Woods said there was no panic on the South sideline.

“Our motto all week was weather the storm. Coming into this game we knew that we were undersized and everyone was talking about how big the North was and how many stars they had and they were a good team, you can’t take that away from them,” Woods said. “We fought through that first storm, came back, put some points on the board and were able to build some momentum. The family bond that we created out there was something special.”

The South took a 13-6 lead at the break and just a few minutes into the second half, Omaha South’s Alan Mendoza booted a 51-yard field goal and bumped the advantage to 16-6. Mendoza was selected as the games offensive MVP, while Ashland-Greenwoods Jacob Ludwig captured the defensive honors.

That score allowed the South defense to pin their ears back and put all kinds of pressure on the North’s quarterbacks.

“I love pass rushing. Especially on these bigger guys who take up a lot of room, but couldn’t really move all that well and pass block,” Woods added. “It was a pretty open lane at times and it was just a lot of fun.” The York graduate was also credited with deflecting a punt in the in the second quarter.

Woods will further his education in the fall at Midland University where he will study Digital Marketing and play football for the Warriors.

Diaz had one of the longest runs from scrimmage by a running back when he burst through the line for 14-yards in the second quarter.

“It was great that I could help my team get some yards and eventually win the game,” Diaz explained. “That play broke open and I was able to get some big yards and a first down to keep the drive going.”

The final touchdown was a double-reverse as Diaz, who is headed to Chapman University in the fall to study engineering, took the hand-off from quarterback Evan Johnson of Adams Central and handed off to Deryk Huxoll of Cambridge who scored to account for the final tally of the game.

Brees caught a four-yard pass on the second play of the game and had several carries from his running back position, while VanHousen played sparingly seeing action on a couple of kickoffs.

Brees is headed to Morningside to play football and VanHousen will take his football talents to UNK.

“It was so special to be selected to play in this game and today was a lot more than just a game. That was an amazing feeling, especially in a game like this,” Diaz closed. “It was crazy just being able to go out and represent all the players throughout Nebraska and like I said before all the Shriner Hospitals.”

Phelps, Ohno open up about suicide, depression in new doc

Cyclist in Poland crash stable after 5-hour surgery on face