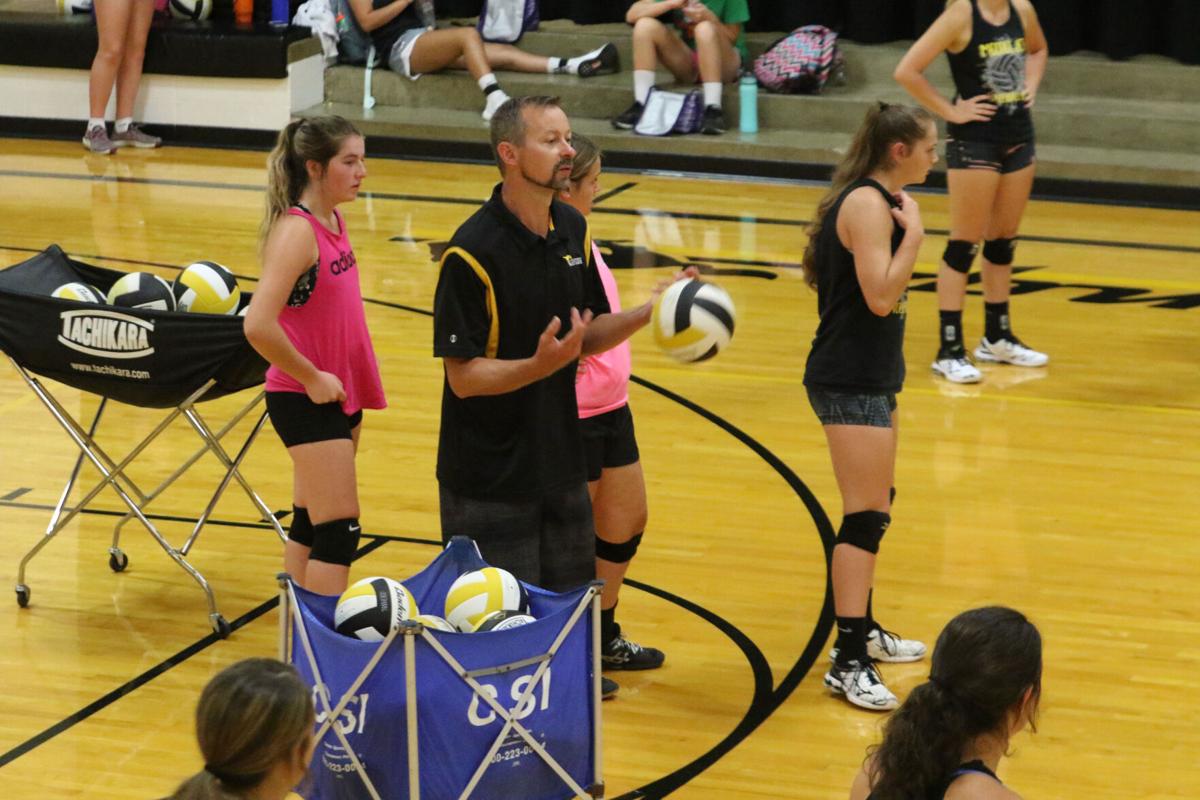 McCool Junction’s first-year volleyball head coach Dave Stahr goes through drills with his team on the eve of his coaching debut on August 27 against Silver Lake. 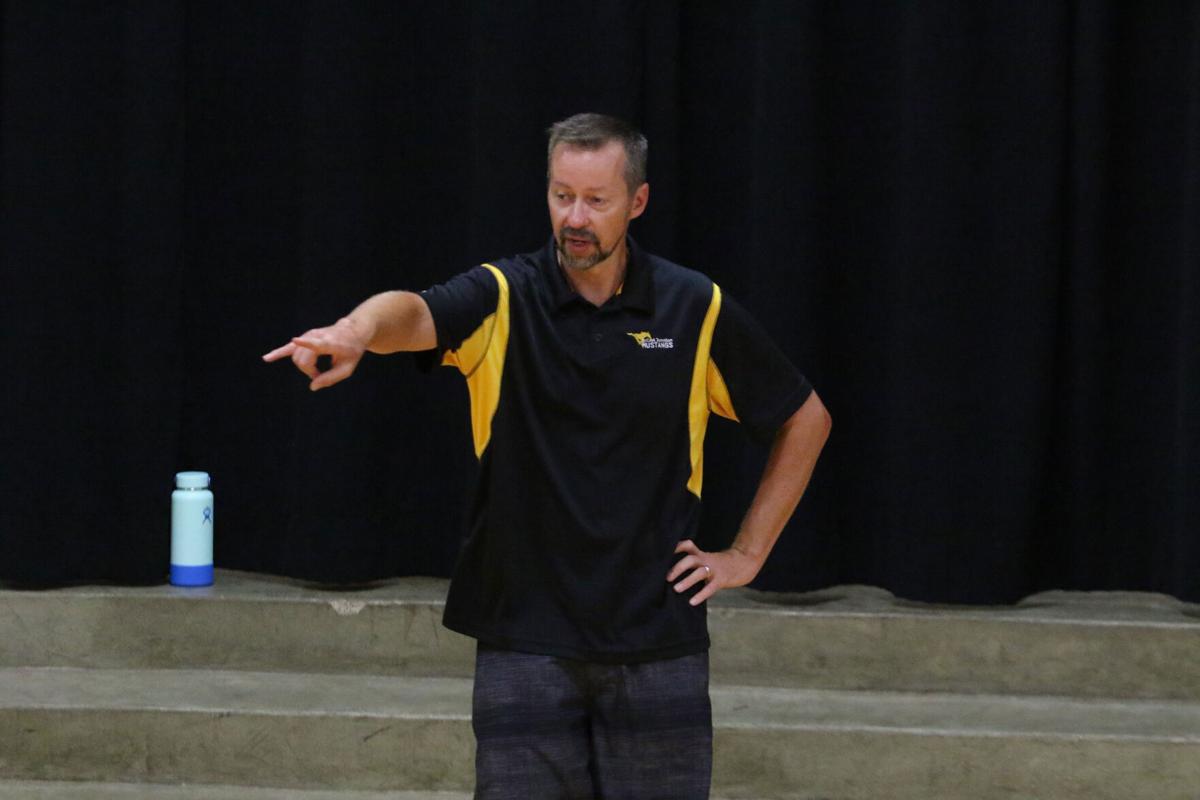 McCool Junction volleyball head coach Dave Stahr said that “growth” is the one word he would use to describe his coaching philosophy. “I want these girls to grow as people, not just as players, and I know my assistant coach, Melanie Baxa, is right on line with that as well.”

Stahr didn’t look to become head coach, it just sort of turned out that way.

“I guess it sort of just happened, more than being a conscious decision. I’ve been involved with McCool Junction for about ten years, because my wife is the band and choir teacher there,” Stahr said. “I always want to help out in whatever way I can, so when the head coach resigned before the 2018 season, I got on board as an assistant coach and am moving up to head coach this year.”

The name Stahr is synonymous with Nebraska volleyball.

His sister, Virginia Stahr, played at Nebraska from 1986-89 and earned All-American status and several times was a Big Eight All-Conference selection. Virginia attended Centennial High School where she helped lead the Broncos to Class C-1 state titles in 1984 and 1985.

Dave said his volleyball IQ was developed by following his sister during her career, even to Hawaii.

“I learned ‘volleyball IQ’ as a spectator. I also learned what good volleyball looks like, and understand what it takes to get there,” Stahr said. “Watching my sister improve as an individual, the team improve as a unit and the entire volleyball program moving into relevance was an exciting thing to experience.”

Stahr was even good enough to be offered a college scholarship to play the game after Virginia’s playing days were over.

“I didn’t touch a volleyball as a player until several years after my sister had graduated. After just a few practices and a couple of club tournaments, I found myself with a college scholarship of my own to play a sport that guys around here generally don’t play,” Stahr said. “I wasn’t really very good looking back, but I understood the game. I don’t think any of that would have happened if I didn’t have the opportunity to watch my sister play at Nebraska. Understanding the game is a huge part of being able to play it, and is something I want to be sure to teach our players.”

Stahr hopes to use his volleyball IQ and knowledge of the sport to help grow the game at McCool Junction. When asked to describe his coaching philosophy in one word, he said “growth.”

“Growth extends beyond the walls of the gym. I want these girls to grow as people, not just as players, and I know my assistant coach, Melanie Baxa, is right on line with that as well,” Stahr said. “If a person can improve themselves each day on the court, in the classroom, at home and at work, what more could be expected?”

Stahr said the COVID-19 issue is always present and they have done what they need to do to keep everyone safe.

“We’ve modified drills so girls are more spread out. During summer conditioning we needed to have the girls come in two groups, but that worked out better with their schedules anyway. We do talk a lot about being prepared for basically anything as we move into the season,” Stahr said. “We hope to play all of our games, have fans there cheering us on, and just have a normal season – but we do realize the potential is there for someone to decide we’re done for the season at any time. That would be a major disappointment, but we just focus on controlling the things we can, and taking the rest as it comes.

Stahr is looking forward to his first year as head coach and is excited for the upcoming season as the players have dedicated themselves to getting better.

“I just want to give a huge shout out to our players for making the commitment to attend summer conditioning this year. Last year by the end of conditioning season we were regularly down to only one or two girls showing up, sometimes none at all,” Stahr said. “This year we had well over 20 showing up each day. That commitment is going to have a huge impact on what’s happening on the court this year, and I can’t wait to watch.”

Stahr coached his Mustangs to a 3-2 win over Silver Lake in his coaching debut on Thursday, Aug. 27.

No. 7 York rolls through Crete after long layoff

COLUMBUS – The York Dukes boys tennis team went to Columbus and left with a 6-3 win on Monday.

Dukes get road split on the softball diamond in St. Paul

Sports Actually: How about a dose of outdoors this morning?

McCool Junction’s first-year volleyball head coach Dave Stahr goes through drills with his team on the eve of his coaching debut on August 27 against Silver Lake.

McCool Junction volleyball head coach Dave Stahr said that “growth” is the one word he would use to describe his coaching philosophy. “I want these girls to grow as people, not just as players, and I know my assistant coach, Melanie Baxa, is right on line with that as well.”