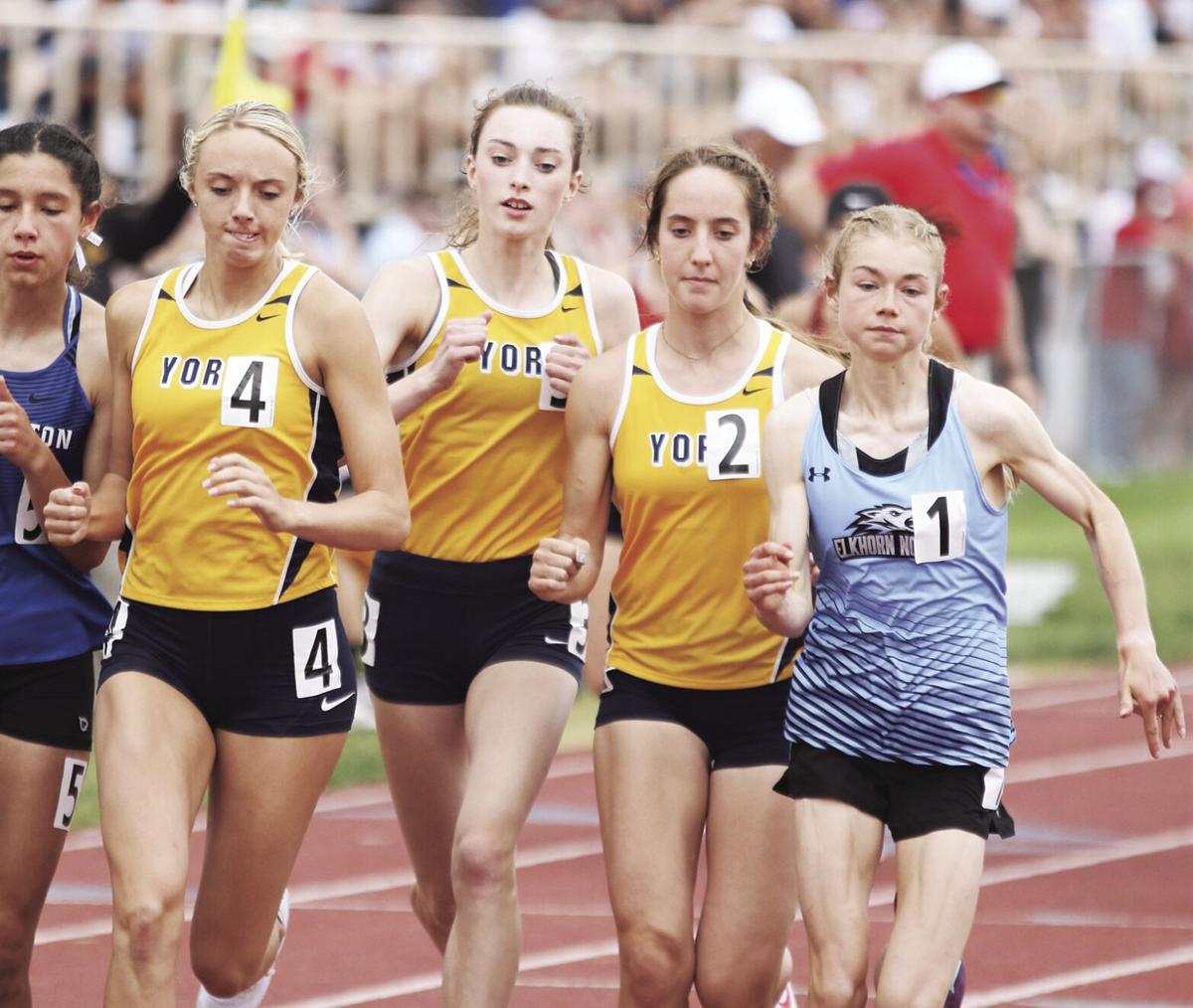 York’s dynamic trio of Maddie Portwine, Brynn Hirschfeld and Kassidy Stuckey take off in the finals of the 1600 meter race at the Class B State Track Meet. A 1-2-5 finish by the Dukes would give the team their first Class B State team title since 1993. 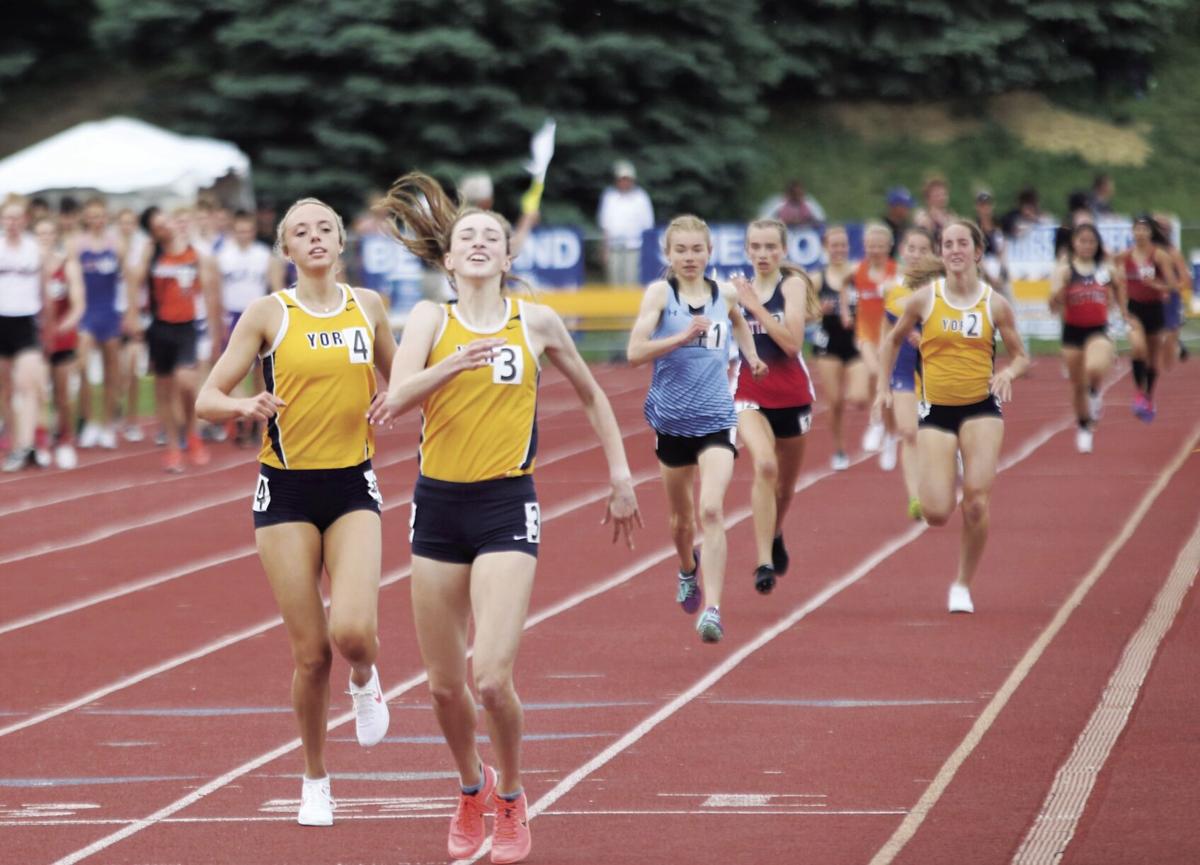 York junior Brynn Hirschfeld is all smiles as she wins the 1600 meter final for the second time in a row. Teammate Maddie Portwine is second, repeating her 2019 performance and freshman Kassidy Stuckey takes fifth as the Dukes 22 points shuts out Elkhorn North.

For one thing they knew that there were other teams out there that were capable of winning the state Class B title and Branz just wanted to be sure that they had thought the plan through and given the York girls the greatest opportunity to succeed.

Even after careful planning, York went into the final race of the day for the Dukes, trailing Elkhorn North 52.5 to 41. At one point during the second day, York had built a lead in the team race of 41-23, but with only two events on Saturday, that lead did not last.

The 1600 was by far the Dukes strongest race and Brynn Hirschfeld, Maddie Portwine and Kassidy Stuckey knew exactly what they had to do to make the state title a reality.

Earlier in the day, Hirschfeld had extended the York lead from eight to 18 points as she won the 800 meters.

“I was definitely really nervous before the 800 but I always get really nervous before a race that is just kind of my personality. I knew that I could win and Britt Prince (Elkhorn North) was rated second and I raced against her earlier in the year and we came in like less that second apart,” Hirschfeld said. “I knew that I had to run my race. I wasn’t in the top waterfall part at the start, I was in the bottom and hadn’t practiced from that position. So I had to make sure that I didn’t get boxed in especially how fast it is in the 800. And I ended up handling that really well and instead of cutting in I had to cut out. Running my race and winning was a huge confidence boost for the mile and for me that was big.”

In order to shut out the Elkhorn North Wolves the Dukes needed Hirschfeld, Portwine and Stuckey to score 22 points. That would give York a 10.5 point lead and shutout the Wolves even if they won the 4x400, which they did after Waverly was disqualified.

They scored 22 points with Hirschfeld repeating as the champion from 2019 and Portwine as the runner up. Stuckey finished in fifth to earn four points and give the Dukes just what they needed.

Even after the race head coach Darrel Branz was hoping his calculations had been right.

“I had to calculate a few more times but after we won the 1600 we had shut out Elkhorn North because there were not enough points left for them to catch up,” said Branz. “We were still nervous that we may have miscounted some where or someone was going to add a ½ point back or take a ½ point away. I’m glad we didn’t have to sweat out the 4x400.”

Branz said the championship was way overdue as the York girls had been close twice this year.

“These girls are so athletic and to be right there in both basketball and volleyball, we just needed one. To solidify in history that these girls are that athletic, if you don’t have that state title, it kind of isn’t the same,” Branz added. “When you have that state title everybody is going to remember that class because these girls right here won a state title in track and field and nobody can ever take that away. When people look back the people remember the stories is what bring those memories back. These girls can always look back and remember that. You see the trophies and that is what brings those memories back.”

One Track Mind -- The Game Plan

YORK - The 2021 Class B-3 District Meet was held in Fairbury on Thursday, May 13, and York’s real challenge was making sure the Dukes were set…

YORK - In recent years York girls athletics have knocked on that championship door but couldn’t quite break through.

One Track Mind -- Meet the Champions

York’s dynamic trio of Maddie Portwine, Brynn Hirschfeld and Kassidy Stuckey take off in the finals of the 1600 meter race at the Class B State Track Meet. A 1-2-5 finish by the Dukes would give the team their first Class B State team title since 1993.

York junior Brynn Hirschfeld is all smiles as she wins the 1600 meter final for the second time in a row. Teammate Maddie Portwine is second, repeating her 2019 performance and freshman Kassidy Stuckey takes fifth as the Dukes 22 points shuts out Elkhorn North.