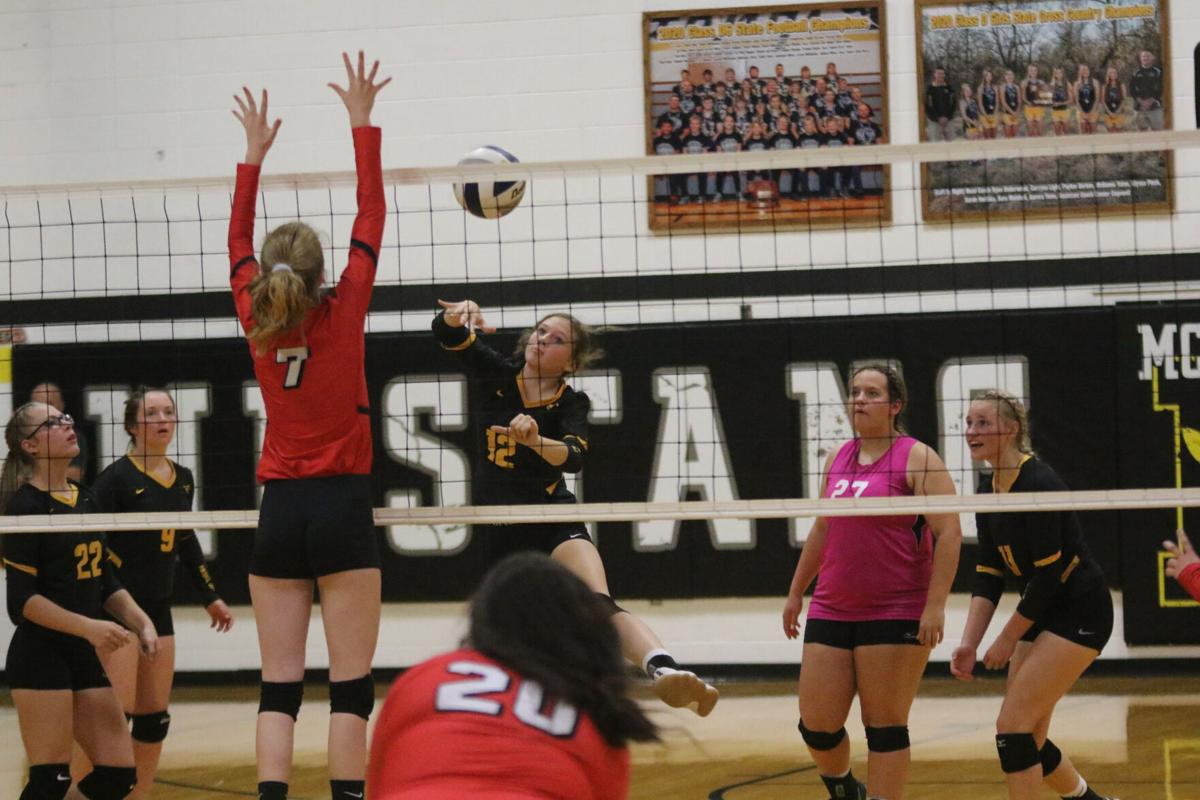 McCool Junction sophomore Lana Rea (12) hammers a kill during Thursday night’s sweep of Harvard as teammates Bailey Hall (22), Morgan Thieman (9), Zarina Flaherty (27) and Brooke Schulz (11) look on. The Mustangs dominated the Cardinals 25-4, 25-8, 25-10 to pick up their third win of the season. 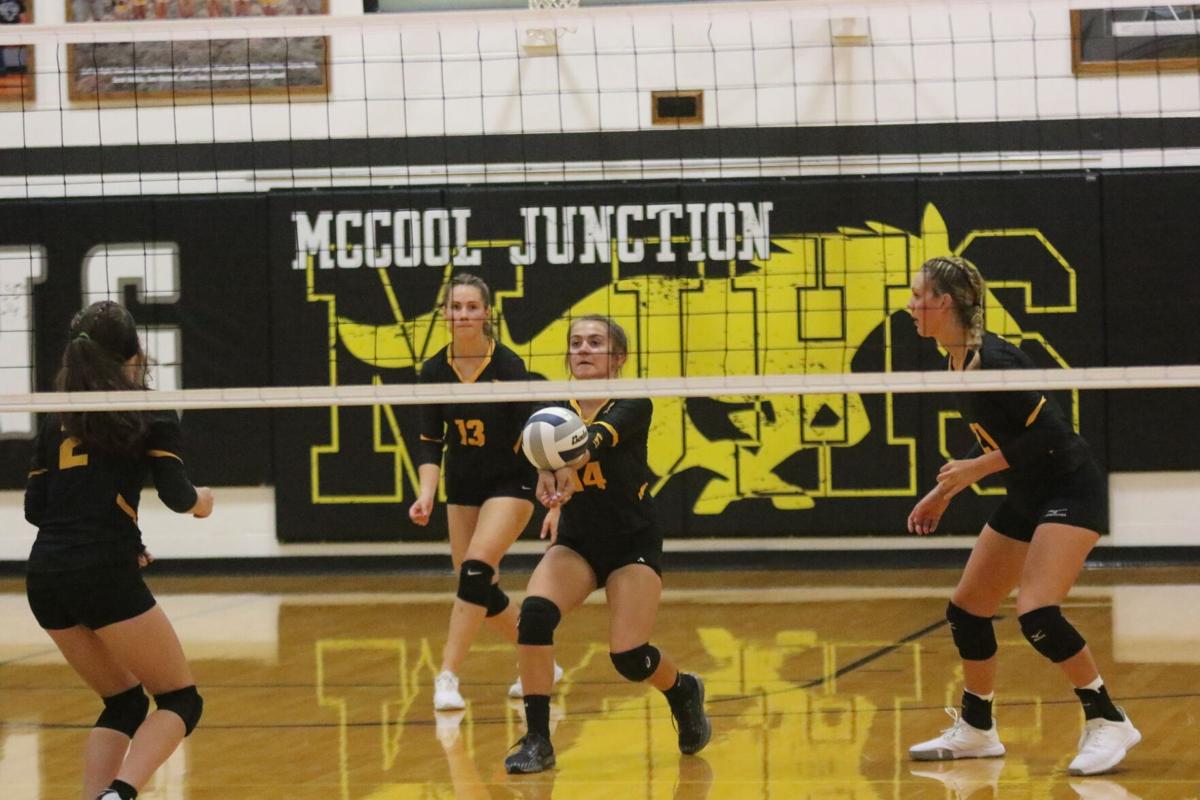 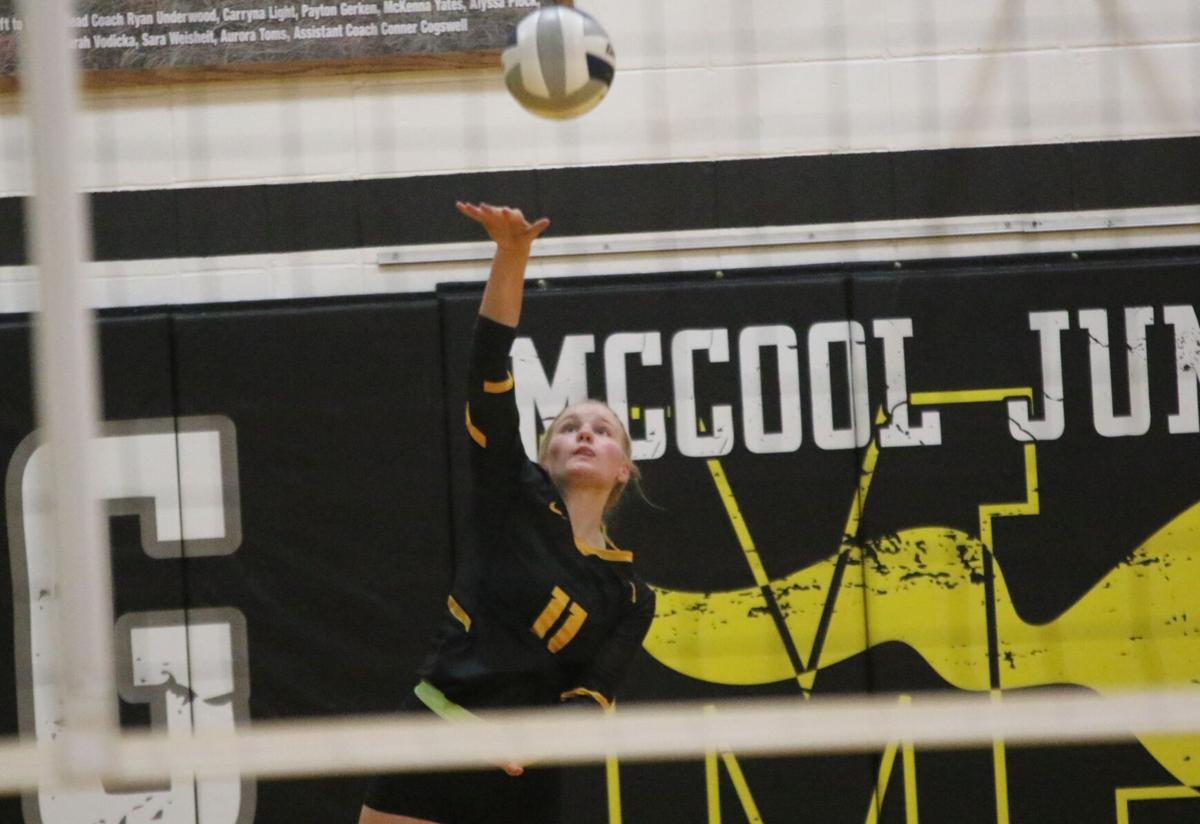 Brooke Schulz dominated at the service line for McCool Junction against Harvard on Thursday night. The junior crushed 11 aces as the Mustangs finished with 25 for the match in a three-set sweep of the Cardinals.

MCCOOL JUNCTION – In what has been a difficult 2021 season, the McCool Junction volleyball team welcomed the Harvard Cardinals to town Thursday night seeking a spark.

The Mustangs entered Thursday’s match 2-11 and often struggled during a four-match losing streak, but they flipped the script against the one-win Cardinals.

Harvard scored the match’s first two points, but from there it was all McCool Junction. The Mustangs promptly flexed their muscles and ripped of a 22-0 run to cruise to a 25-4 win in the opening set. McCool Junction rolled from there, taking the second set 25-8 and the third 25-10 to break out the brooms.

“I was very pleased with how our girls played together and got a win,” Mustangs head coach Dave Stahr said. “We really needed a win badly and to have a good win like this tonight.”

After the Cardinals claimed the first two points of the match, McCool Junction scored a point and sent Brooke Schulz to the service line. The junior stayed there for the next 22 points as the Mustangs ripped off a dominant run to seize control of the match.

Schulz crushed three aces during the run, while sophomores Kaeli Meehan and Shelby Tritt and freshman Morgan Thieman all hammered kills as the Mustangs extended their lead to 20 points before Harvard finally stopped the bleeding with consecutive points.

After a McCool Junction kill, freshman Bailey Hall buried back-to-back aces to clinch a 25-4 win in the opening set.

Both teams began the second set evenly matched as the Mustangs opened up a 5-2 lead thanks to a pair of Cardinals errors. Schulz then ripped off three consecutive aces as the McCool Junction lead ballooned to 9-2 and Harvard called a timeout.

Given an 11-point cushion, McCool Junction cruised to a 25-8 win and took a dominant 2-0 lead in the match.

The Mustangs raced out to a 14-4 lead in the third set as Meehan crushed a pair of kills and added two aces. After a Harvard point stopped the run, Schulz responded with a kill and three straight aces to push the lead to 18-5.

With their backs against the wall, the Cardinals fought off three straight match points before a service error ended the set and the match.

“It’s easy in games like this to lose your focus and start to make mental errors,” Stahr said. “I thought we did a good job staying on top of the game.”

Meehan hammered four kills to lead the Mustangs, while Tritt and senior Madilyn Stacy added two apiece. McCool Junction only tallied 11 kills for the match, but it didn’t need a dominant attack thanks to a stellar night at the service line.

Schulz crushed a whopping 11 aces in three sets to power the Mustangs, who finished with 25 aces for the match. Flaherty added five aces and Tritt followed with three, while Meehan, Hall and Josey Vodicka notched two aces each.

McCool Junction returns to the court on Sept. 23, when the Mustangs will hit the road and look to win consecutive matches for the first time this season against the Heartland Huskies.

CRC volleyball tourney off and running for 2021

McCool Junction sophomore Lana Rea (12) hammers a kill during Thursday night’s sweep of Harvard as teammates Bailey Hall (22), Morgan Thieman (9), Zarina Flaherty (27) and Brooke Schulz (11) look on. The Mustangs dominated the Cardinals 25-4, 25-8, 25-10 to pick up their third win of the season.

Brooke Schulz dominated at the service line for McCool Junction against Harvard on Thursday night. The junior crushed 11 aces as the Mustangs finished with 25 for the match in a three-set sweep of the Cardinals.