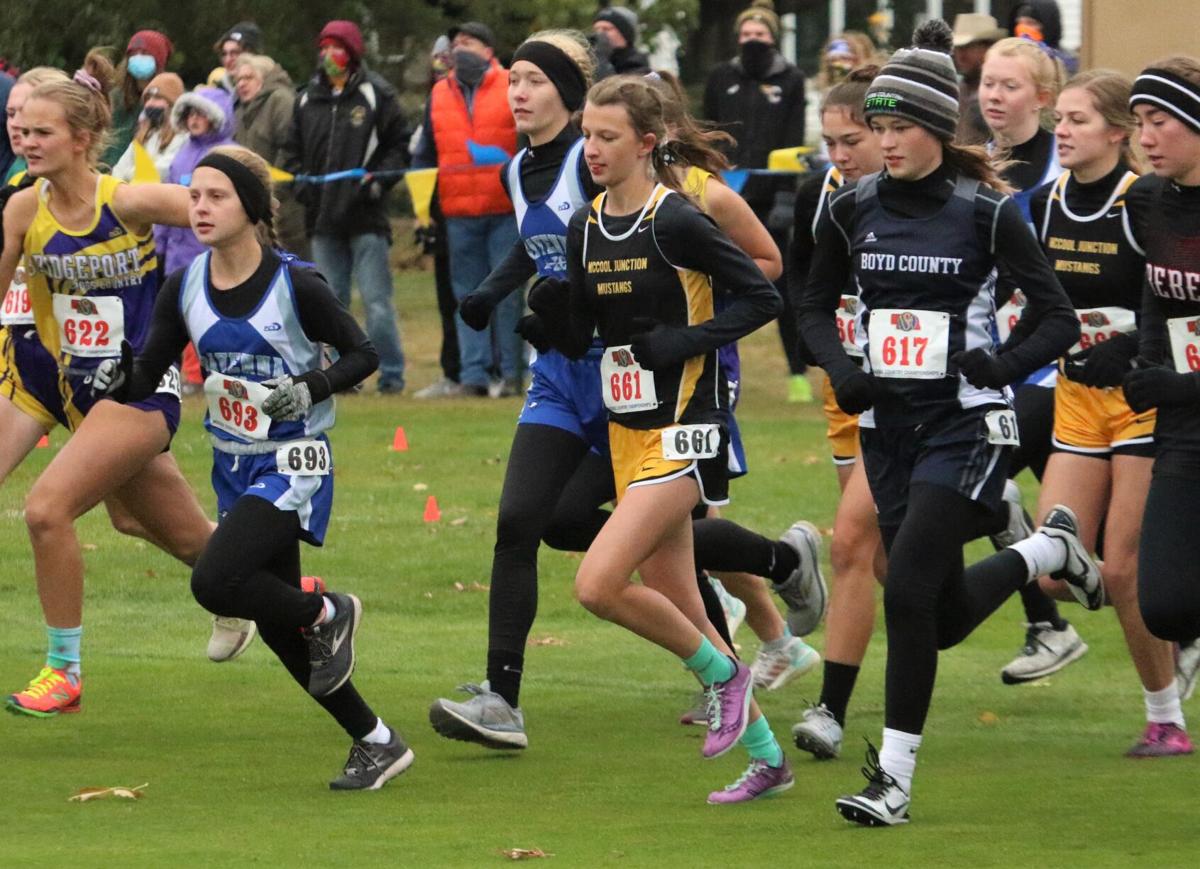 Junior Payton Gerken leads the Mustangs out of the starting blocks at the Class D finals last year in Kearney. Gerken placed 12th overall and is one of the team leaders going into the 2021 season. 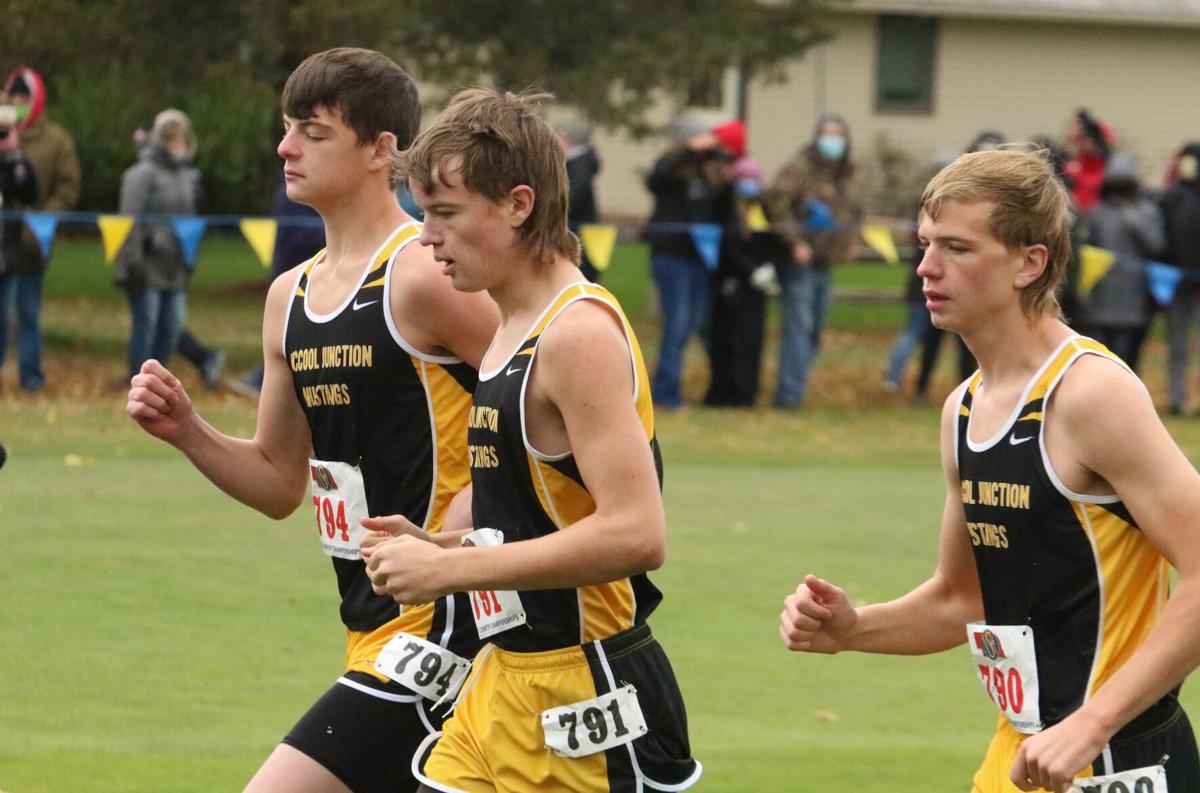 McCool Junction finished fifth at last year’s state cross country boys championships and returns four of the five runners who competed. Seniors Ian Stahr (794), Luke Brugger (791) and Jacob Brugger (790) will be three of the keys to Mustang success in 2021. 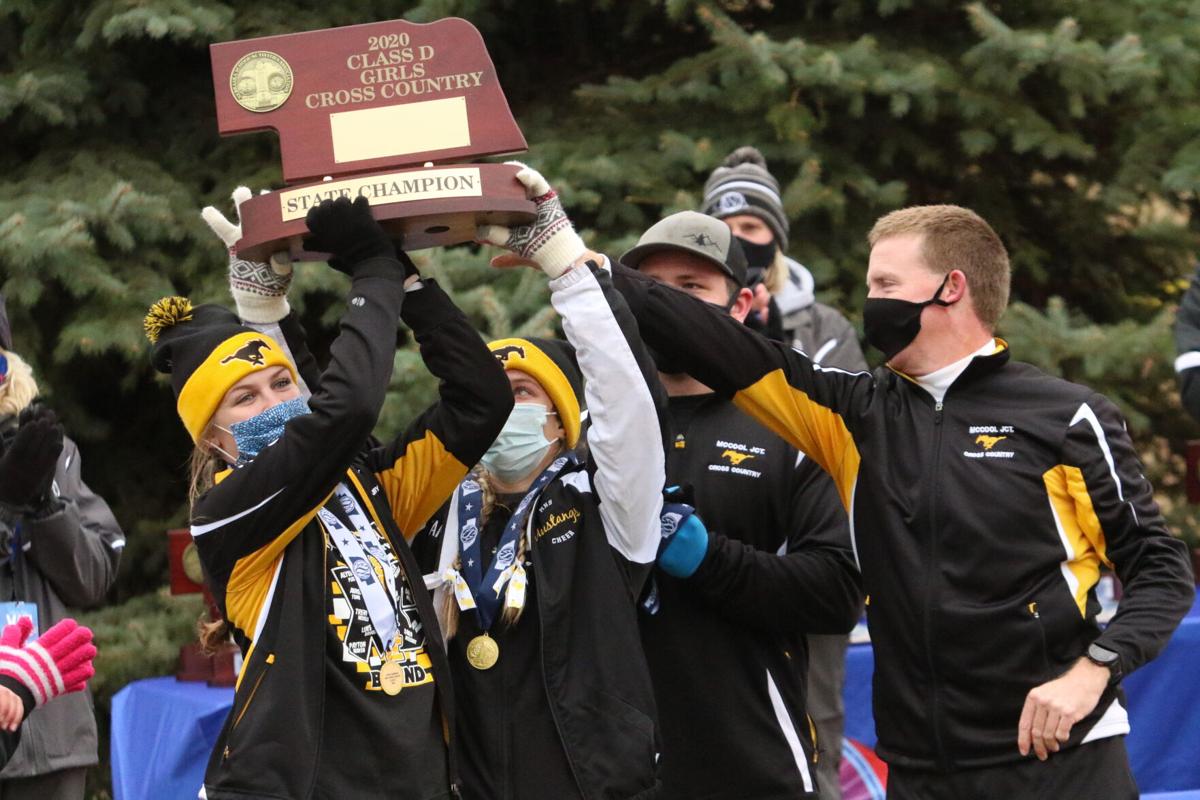 McCool Junction head cross country coach Ryan Underwood hands the Class D State Championship trophy to his team last October at the Kearney Country Club. McCool came into 2021 as one of the favorites in Class D, but that changed over the summer.

Coming into the 2021 season the Mustangs appeared set to make a run at a repeat with three of the five runners who competed at state returning to the team this fall.

Those girls being junior Payton Gerken who finished 12th overall and sophomores McKenna Yates and Sara Weisheit who crossed the finish line in 24th and 109th respectively.

“We have some amazing leaders on our team. Payton Gerken has returned from injury in track very strongly. She has looked great in summer conditioning. Sara Weisheit, a varsity returner from last year, also has made strong gains from last fall,” said head coach Ryan Underwood. “Those two young ladies are dynamite ambassadors and leaders for our program. They really stand out with their approach to cross country and how they represent our team in everything they do.”

But Yates has decided to try her hand at volleyball this season, which Underwood said changes the outlook for the girls.

“If you would have asked me right after the season last year what our outlook was, it would have been a different answer than the one I am giving now. That's how life goes though; it is always changing. I really thought heading into this season that we would have a good chance to repeat as champions with who we had returning,” Underwood said. “Yet, we are not going to get everyone back from last year's team. McKenna Yates has decided to play volleyball this year. It would be devaluing her presence and I would be lying if I said that didn't really impact our team. McKenna was an integral part to our championship last year and had the potential for a top 10 finish at state this year with continued work.”

Underwood added the team does return great leadership and feels they can still qualify for state.

“We had such a magical season last year. As a coach I have been around the block a time or two. When you have a season like last year, you know how much blood, sweat and tears goes into a season like that happening. You appreciate how amazing it was when everything came together the way it did. In an idealistic world, you hope that will create a big wave of momentum that will carry into the next season so that season can be replicated,” Underwood said. “As a coach, you hope that will fuel the fire of many to compete to be champions. That hasn't exactly been the case for our team. We don't live in an idealistic world and part of life success is being present and attacking the current situation head on. Our team fought its way to the top in the past and being fighters has always been a part of our calling card. I am sure that the girls we ultimately do get out for cross country will be fighters and will do everything in their power to help us be the best that we can be. It will be a fun year to see how high we can rise. We might be short in numbers, but that just might provide some extra motivation for our girls to be the little engine that could.”

While the girls will have to retool some, the boys are returning four of the five runners from last year’s team that posted a fifth place finish at state.

The only runner who will not return is Tyler Neville who graduated in 2021. Neville finished 10th in the state championship run last year. The returning runners are seniors Jacob Brugger (39th overall); Luke Brugger (72nd) and Ian Stahr who crossed the line in 80th place. Trenton Neville, a junior this year, was 113th at state.

“We return the bulk of our team that finished fifth at state last year. The boys team has been a very motivated group. A lot of our returning top five like Jake Brugger, Luke Brugger, Trent Neville and Ian Stahr have really continued to develop from last year,” Underwood explained. “We also have a strong freshman class. Some of our freshmen like Joey Pedersen and Jayden Fuehrer are going to be able to get in the mix and compete for varsity spots right away. Our depth is as strong on the boy’s side as it has ever been. We will probably end up with about 15 guys out and most of them will be in contention for varsity spots.”

Underwood also talked about how the summer months lay the groundwork for success in the fall.

“Our summer/offseason conditioning is very important to us. Nothing is mandatory, yet our runners understand that the summer work they can get in sets the groundwork for how high we can rise during the season. The summer lays the groundwork for so much of what we are able to do later on. We work on technique so we can be more efficient with our running technique later on. When we get to races we want to be as efficient as possible with our technique so we are wasting as little energy as possible and maximizing the speed and energy we have available,” Underwood explained. “We work on building strength. Building strength will help us run more powerfully, but also help us build stronger bodies so we can train more to maximize our production. We also work a lot on speed development. The more speed we have available, the more we can utilize that speed in our race specific training during the fall. Finally, we also do a lot of endurance work during the summer which allows us to build for more endurance work later on.”

Simone Biles says she withdrew from final to protect team, self; plus more from Tokyo

Simone Biles says she withdrew from the Olympics gymnastics team final because she wasn't in the right headspace to compete. Here's the latest.

LINCOLN – Annsley Vernon has had a big week, competing as she did Tuesday evening and Thursday morning in High School National Finals Rodeo go…

With Simone Biles out, Russians win gymnastics gold over US

The Russian Olympic Committee has won the gold medal in women’s gymnastics after U.S. star Simone Biles exited with a medical issue.

Frost said he didn't have anything to do with the process of selecting Alberts, adding that he has already met with his new boss "four times."

For Whom the Buzzer Tolls

A decade ago, 12-year-old me watched in awe as the first winds of massive change hit the college football landscape. Of course, the winds firs…

FAIRBURY – The York Seniors went 1-1 in district action over the weekend, getting no-hit in an 8-0 loss to Hickman on Saturday night. In a Sun…

SILVER CREEK - The offense pounded out 16 hits and after a shaky start on the road against Twin River, the York Cornerstone Senior Kings ended…

Asked if he had definitive expectations for Nebraska football in 2021, Trev Alberts took a different approach than his predecessor, Bill Moos.

In the market for a medal, US rugby 7s finish just short

Junior Payton Gerken leads the Mustangs out of the starting blocks at the Class D finals last year in Kearney. Gerken placed 12th overall and is one of the team leaders going into the 2021 season.

McCool Junction finished fifth at last year’s state cross country boys championships and returns four of the five runners who competed. Seniors Ian Stahr (794), Luke Brugger (791) and Jacob Brugger (790) will be three of the keys to Mustang success in 2021.

McCool Junction head cross country coach Ryan Underwood hands the Class D State Championship trophy to his team last October at the Kearney Country Club. McCool came into 2021 as one of the favorites in Class D, but that changed over the summer.