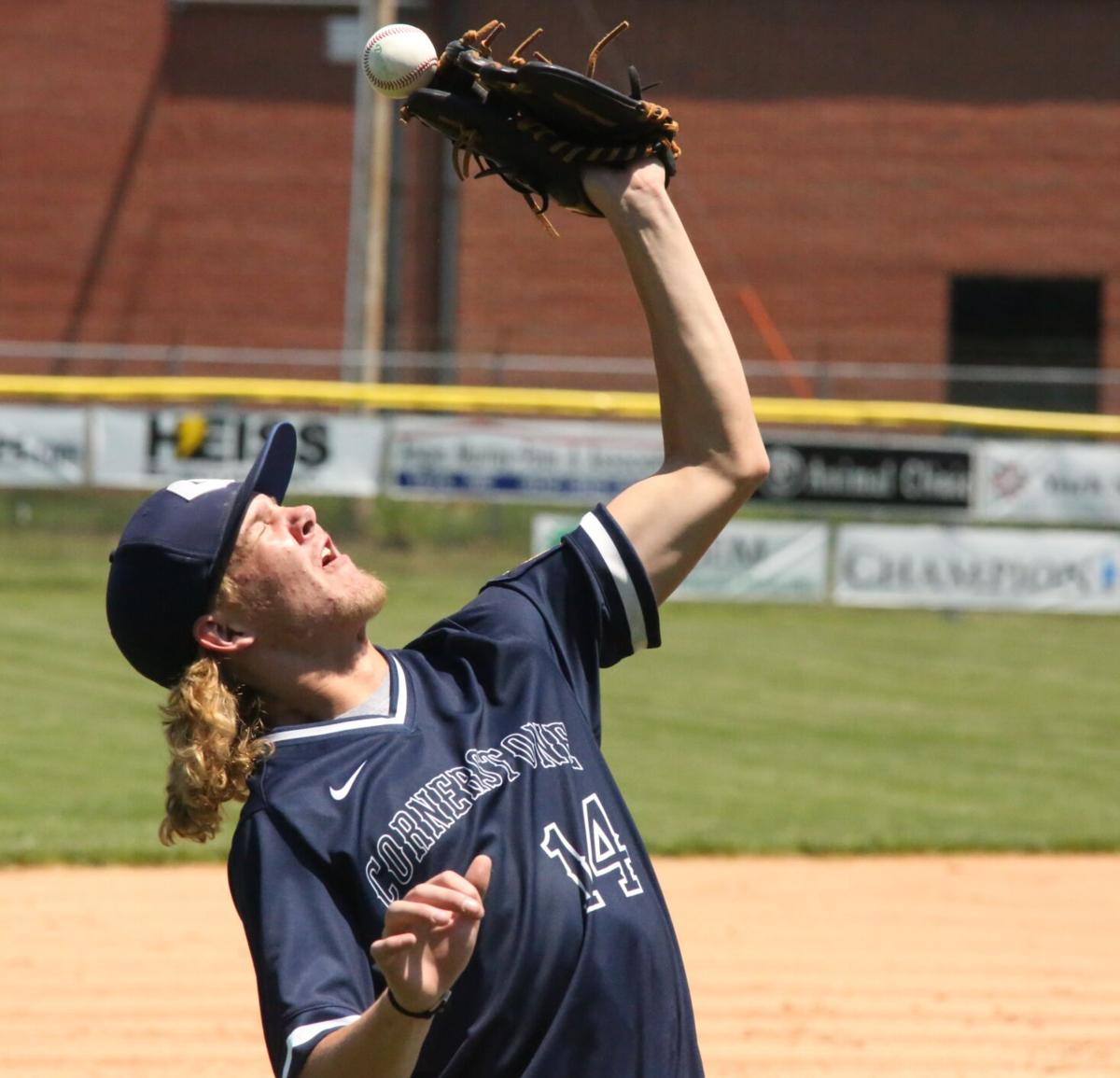 The high afternoon skies at Levitt Stadium on Saturday proved to be tough as several fly balls were dropped. Here, York third baseman Parker Anderson just can’t find the handle as the pop up drops for one of York’s six errors in game one against Grand Island Juniors. 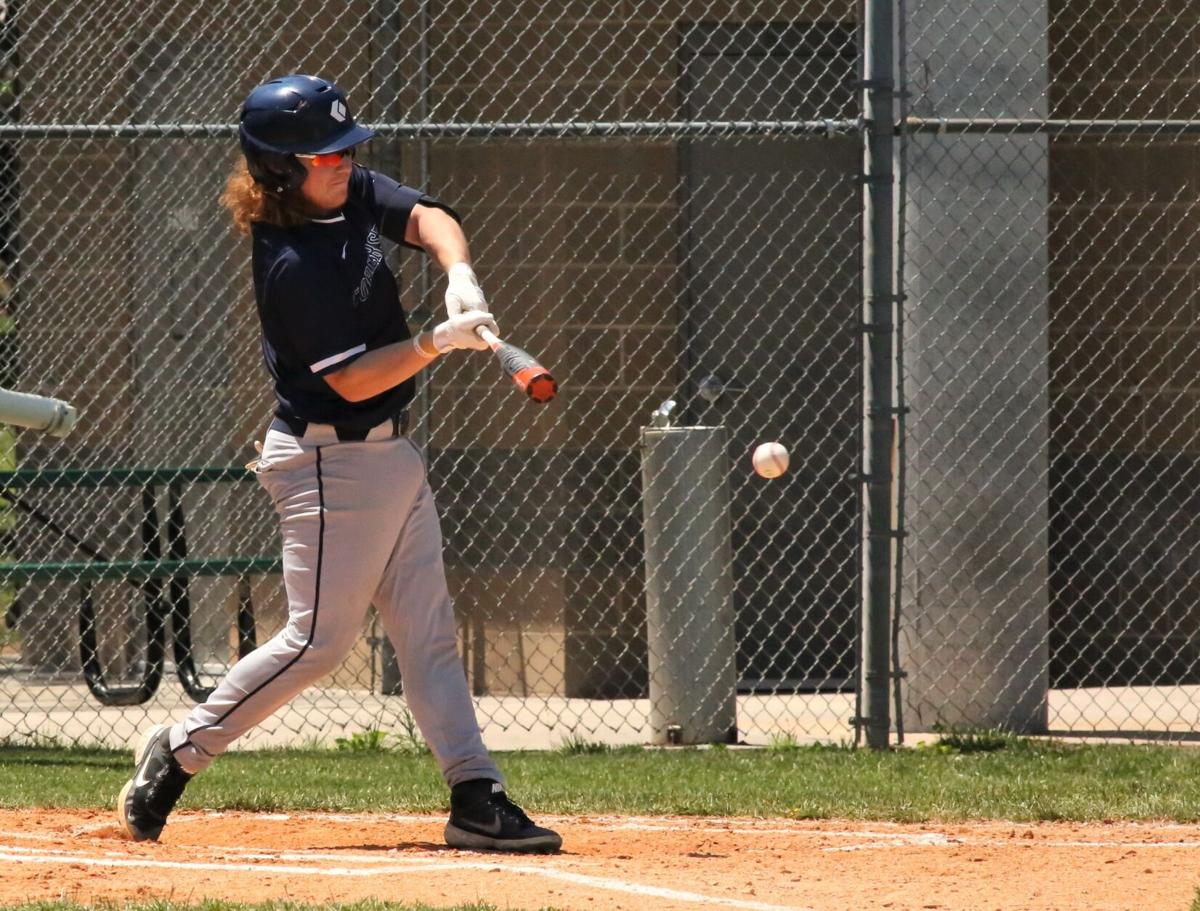 York’s Carter Culotta had a solid day at the plate Saturday for the Kings. Culotta went 4-for-7 with three RBIs in the Kings’ doubleheader loss to the Grand Island “B” team.

YORK - Every coach will admit there is no defense for errors.

In Saturday’s doubleheader loss to Grand Island “B” at Levitt Stadium, the York Cornerstone Junior Kings defense accounted for 10 errors and 14 unearned runs.

The Kings are now 10-4 on the season and will get back to the diamond Friday against Lincoln Christian on the road at 5:30 p.m. The Kings and Christian split a doubleheader earlier in the year with York winning 13-11 and dropping a 9-4 decision.

A Cameron Logston two-run double cut the GI lead from 4-1 to 4-3 in the bottom of the third, but that would prove to be all the offense the Kings could muster in the 11-3 loss.

The visitors from out west added two in the fourth and two in the fifth to open the lead to 8-3 and iced the win with a three-run sixth as time expired.

York’s five-hit attack was led by Carter Culotta with two hits in two plate appearances, while Logston drove in two runs with a double.

The loss went to starter Garrett Bonnell who was on the hill for three innings. He allowed three hits and four runs, one earned, and recorded two Ks. Logston pitched the final three innings and gave up seven runs, two earned on four hits.

The Kings’ offense was not the problem in the second game as they scored 11 runs on 10 hits.

The defense once again let the team down with four errors and six more unearned runs.

Trey Richert, Isaac Stark and Culotta all had multi-hit games for the Kings, who could not slow down the GI offense that recorded 13 hits and finished the day with 25 total runs in the two-game sweep.

York had trimmed the deficit to 8-6 after the bottom of the fourth, but Grand Island posted six runs in the fifth to push the lead to 14-6.

York would score four in the bottom of the fifth and add a single run in the seventh, but it was too little and too late.

Richert was 3-for-4 with two runs scored, two RBIs and also smacked a double. Stark and Culotta were both 2-for-5 with Stark scoring three runs and also recording two stolen bases, while Culotta led the Kings with three runs batted in.

Richert, Culotta and Trent Bush all took turns on the mound for the Kings.

How a midnight phone call led the nation's No. 1 volleyball recruit in the '23 class to pick NU

June 15 was the first day Division I volleyball coaches could talk to Class of 2023 prospects. The Huskers called Harper Murray at 12 a.m.

PALMER - The 2021 Class C State Baseball Tournament opened over the weekend and the Shelby-Osceola-Stromsburg Rebels split their first two games.

LINCOLN – As she gets set to begin the next chapter of her life next month, Maddie Portwine took to the basketball court one final time as a h…

The high afternoon skies at Levitt Stadium on Saturday proved to be tough as several fly balls were dropped. Here, York third baseman Parker Anderson just can’t find the handle as the pop up drops for one of York’s six errors in game one against Grand Island Juniors.

York’s Carter Culotta had a solid day at the plate Saturday for the Kings. Culotta went 4-for-7 with three RBIs in the Kings’ doubleheader loss to the Grand Island “B” team.