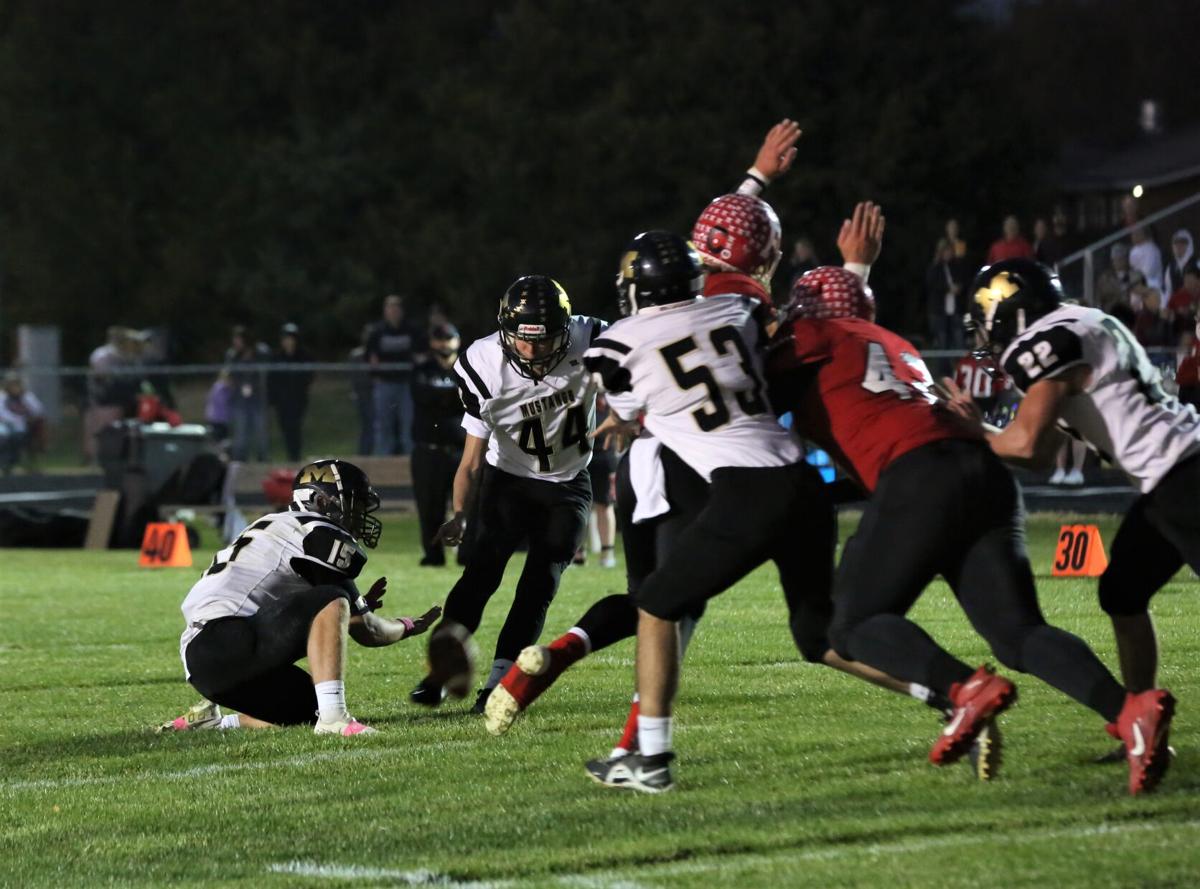 McCool Junction senior Giuseppe Cucchi (44) boots one his three extra points in the Mustangs’ Class D6 Six-Man first round 28-20 win at Franklin. Giuseppi, an exchange student from Italy, scored 10 points with three PATs and a field goal against Franklin. 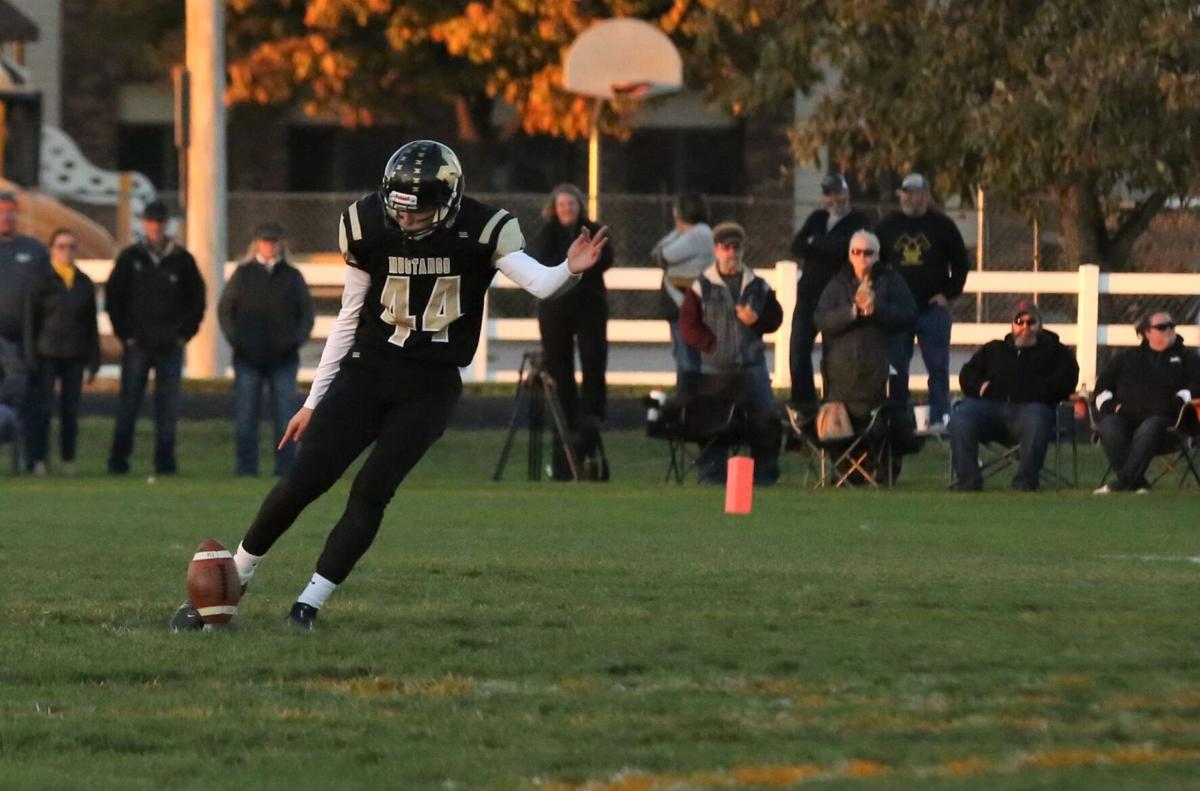 Italy’s Giuseppe Cucchi had some issues at first kicking an oblong football, but he quickly adjusted and turned into a secret weapon for head coach Jarrod Weiss. 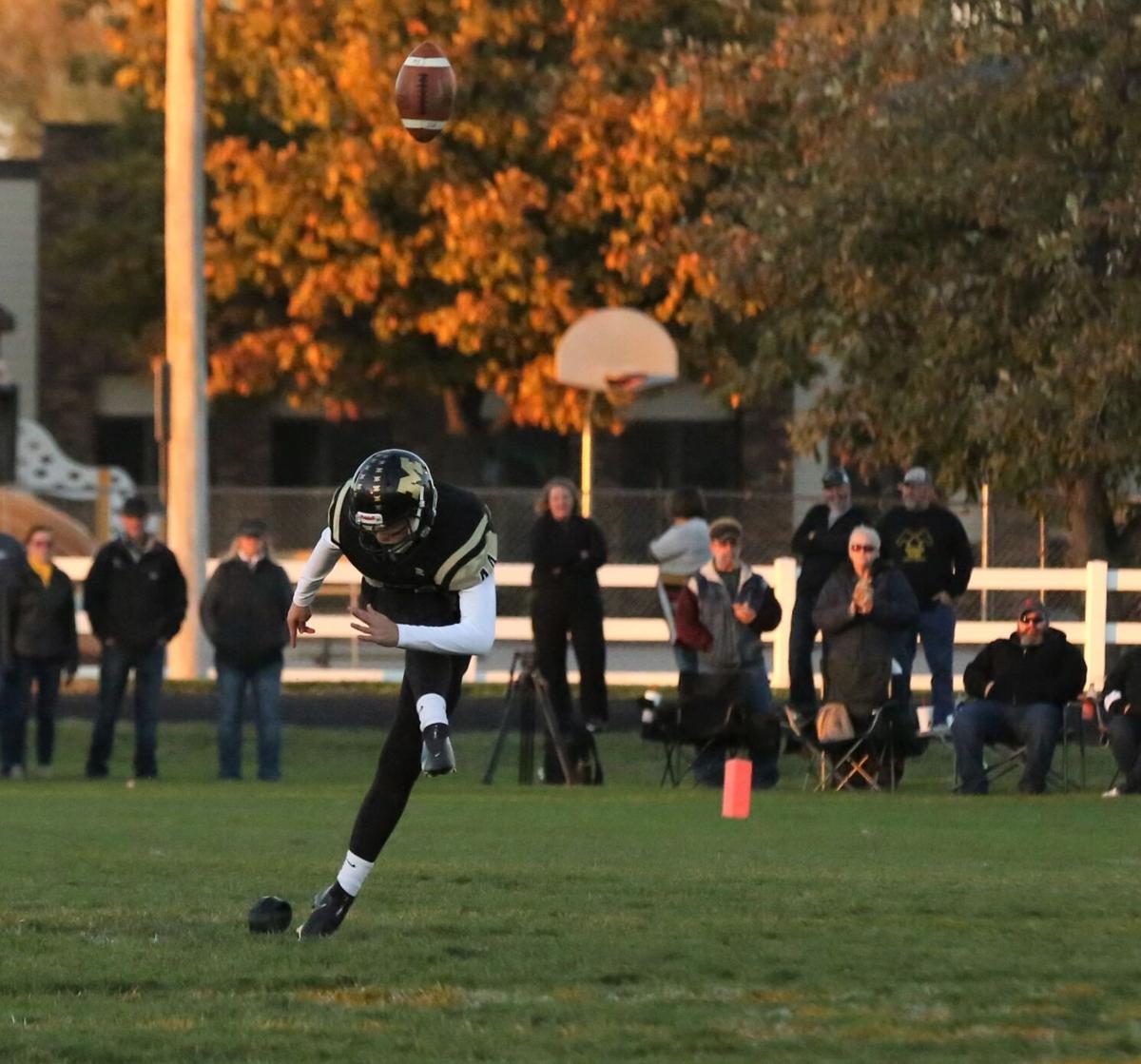 Playing football for the first time in his life, McCool Junction’s Giuseppe Cucchi showed off a strong leg as he booted the majority of his kickoffs through the end zone during the season. He also was a first team all-district selection at kicker for the Mustangs, earning him a chance to play in the Six-Man All-Star game in Chadron next June.

MCCOOL JUNCTION – Before Giuseppe Cucchi came to the United States to attend McCool Junction High School for the 2021-2022 school year, he had to first find out exactly where it was located.

So he went to Google Maps to see where his next challenges would take place.

“I knew I was going to go to Nebraska and I knew I was going to go to the United States, I just didn’t know where. I found out I was coming to Nebraska this June about two months before I came here,” said Giuseppe who is from the country of Italy which is located about 5,000 miles away. “I looked on Google Maps where McCool Junction was and where the family I was staying with was. I checked out some photos, but I didn’t know too much until I got here. It was a big change for me. I like it a lot here, but everything is so different here from back home. It’s cool to experience a different culture from where I used to live. It’s a lot of change, but I like it overall.”

Giuseppe is staying with Raymond and Marilyn White and said he does miss the food from back home, but also added that he really likes breakfast here.

“I couldn’t tell you a favorite food. I just like breakfast here a lot more than I did back home,” he said. “Raymond makes me breakfast, the eggs, bacon and toast, I really like that.”

Back home Giuseppe played soccer and basketball, but as far as football went he knew only what he saw of the NFL games on TV.

“I decided I was going to play football because I wanted to get involved and have fun. I didn’t know much about football or I never played it, just watched some games back home,” Giuseppe explained. “The coaches did a great job of introducing me and helping me and the teammates did a great job and I really liked it. I didn’t know what it was going to be like because I never played it before but it was a great experience I would have to say.”

Giuseppe kicked a rounded ball back in Italy playing soccer, so learning to kick a football took some time.

“I’d say more of the being careful of what place you hit the ball. Like you want to hit it in the bottom half of the ball so it goes high. It’s a lot different than a soccer ball because it doesn’t rotate as much and it’s off the tee, not off the ground,” Giuseppe said. “So it’s a lot different but the motion of the kick is the same. I wouldn’t say it took me a lot of time. The first few times were not so good, because I had never kicked a football but then I got used to it.”

McCool Junction head coach Jarrod Weiss knew when he saw Giuseppe kick he might just have that special weapon.

“I was telling the other coach I think we found us a kicker. I always tell them that if we can find someone to kick the ball through the end zone every time and we can play defense from the 15-yard line I would be happy,” Weiss stated. “Like he said the first couple of times it was a bit of a struggle, but once he learned it we had quite a few touchbacks. I told him that after every touchback he had I had a surprise for him.”

During the course of the season Giuseppe sent a great number of kickoffs through the end zone and became that special weapon that Weiss talked about. He booted two field goals during the season, one of the bigger ones a 27-yarder against Franklin that proved to seal the Mustangs’ 28-20 first round playoff win over the Flyers. Giuseppe also booted three extra points in that game and scored 10 points in the win. A field goal in six-man football is worth four points.

Weiss said not only was Giuseppe a great kicker, but he had a tireless work ethic that allowed him to get better.

“That was the best part about Giuseppe, he was always wanting to get better. I know there were a couple of games where he might have missed a couple kicks and he would come in on the weekend, get a ball and work on things by himself. He was naturally getting better on his own and I really appreciated that about him,” Weiss added. “I think he learned a lot on his own. Coach (Bill) Hobbs does a good job with the special teams and coach Dustin Arduser also helps out a little bit. A lot of it was just him practicing in the off time and he would come in on the weekend with Chase (Wilkinson) and Chase would be his holder and he worked on PATs and worked on his kickoffs by himself.”

Giuseppe was also credited with an assist on a tackle during one Mustang game and he talked also about the Friday night atmosphere at games.

“Some of my kickoffs were a bit short and a couple of times I got hit trying to make a tackle. One time I made an assisted tackle. I wouldn’t say it was scary, I’d say though I am not at that level of tackling like my teammates are,” he stated. “I’d just say the games and the atmosphere of Friday nights. I really like being with my team and cheering on my teammates.”

Giuseppe will also be playing basketball, a game he is a little bit more familiar with. He said he is also excited to get to see snow.

“I think I have warned him that it could get cold even on some Friday nights during the season,” said Weiss. “He did a good job of adjusting to when it was hot during football practice, so I think he is ready to face when it does get cold.”

Weiss added that he has also notified both Raymond and Marilyn that Giuseppe has shown interest in playing football and kicking at the college level. He will have to return home for a year as high school in Italy is five years and not four. They do not have sports in high school, as they play in clubs.

“I feel that I have not made a decision yet, but it is in my options. I still have to decide with my family what I am going to do, but I am considering to continue playing football,” commented Giuseppe. “

Weiss feels there are teams out there who could benefit from what Giuseppe has to offer.

“We had talked a few weeks ago about his interest in it and I got a hold of Raymond and Marilyn and kind of let them know. I think it’s a matter of, what he has to accomplish back home and it is matter of going to look at some schools and where he wants to go,” Weiss said. “I think there is a place out there that could use a kicker with his abilities.”

For now Giuseppe will continue his school year in McCool Junction and be a part of the Mustang basketball team. He FaceTimes with his family every once in a while and keeps up with what is going on back home.

He is looking forward to seeing the snow, but not sure about the cold weather.

“Back home it is about 90 degrees in the summer and the coldest it gets is maybe 25 degrees. We don’t get much snow back home,” Cucchi said. “I feel right now I am excited for it, but when it actually gets here I might not be so excited.”

Because Giuseppe was an all-district first team selection at kicker he is eligible to play in the six-man all-star game in June at Chadron.

YORK – As the calendar approaches the end of November, the high school boys’ basketball season draws near. The first area teams tip off their …

Steven M. Sipple: It all feels far too predictable as Nebraska falters late in season finale

It's easy to imagine Kirk Ferentz telling his Iowa players to keep pressing Nebraska because the Huskers will make critical mistakes.

YORK – The high school girls’ basketball season is just around the corner, with the first area teams set to tip off their year on Thursday, De…

Sports bettors dream: 86 able to bet on game after it ended

Second-half swoon drops YC women in loss to Friends U.

McCool Junction senior Giuseppe Cucchi (44) boots one his three extra points in the Mustangs’ Class D6 Six-Man first round 28-20 win at Franklin. Giuseppi, an exchange student from Italy, scored 10 points with three PATs and a field goal against Franklin.

Italy’s Giuseppe Cucchi had some issues at first kicking an oblong football, but he quickly adjusted and turned into a secret weapon for head coach Jarrod Weiss.

Playing football for the first time in his life, McCool Junction’s Giuseppe Cucchi showed off a strong leg as he booted the majority of his kickoffs through the end zone during the season. He also was a first team all-district selection at kicker for the Mustangs, earning him a chance to play in the Six-Man All-Star game in Chadron next June.