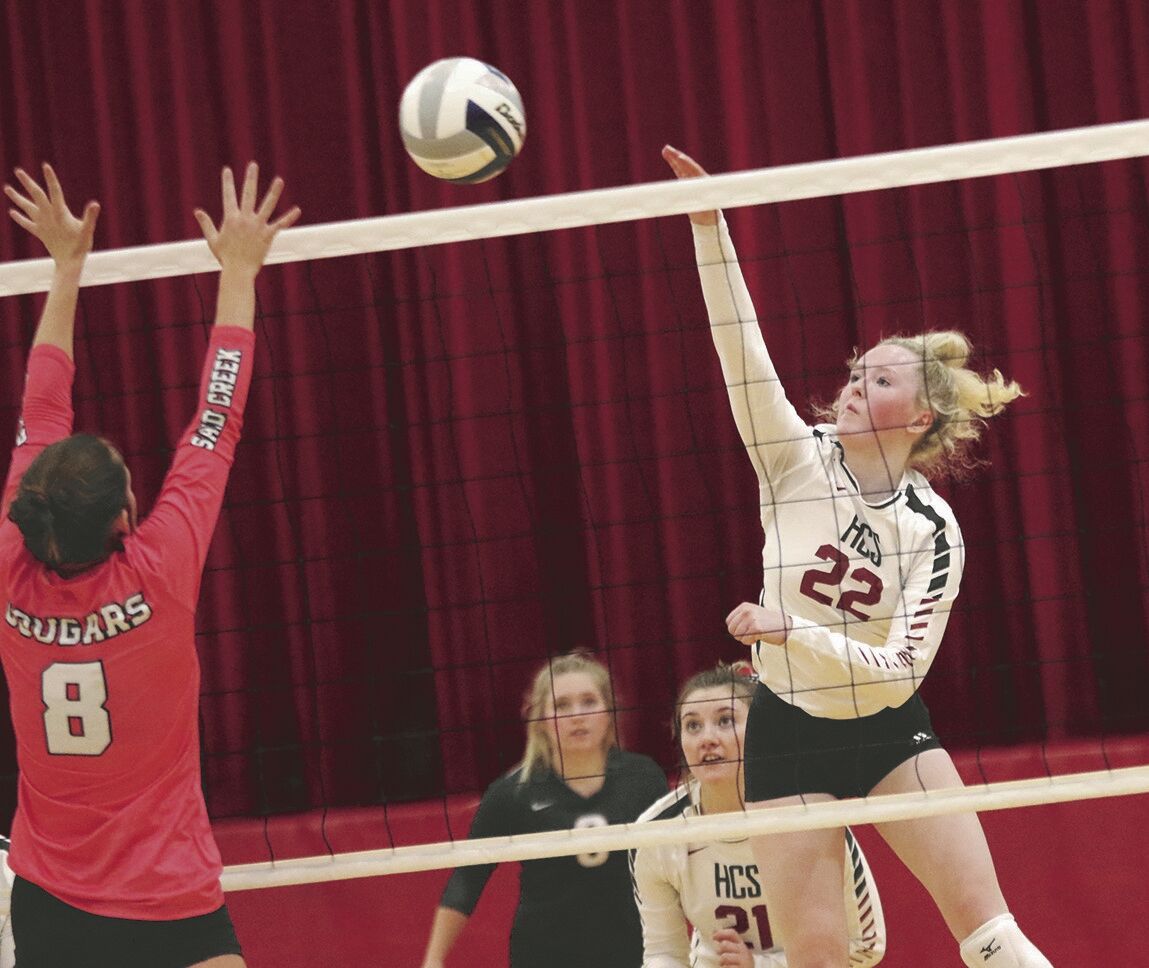 Heartland senior Ella Friesen (22) rises for one of her five kills in a win over Sandy Creek during the SNC Volleyball Tournament in Sutton on Monday evening. The Huskies toppled the Cougars 25-19, 25-23 but lost to 1-seed Sutton in the second round. (News-Times/Christian Horn) 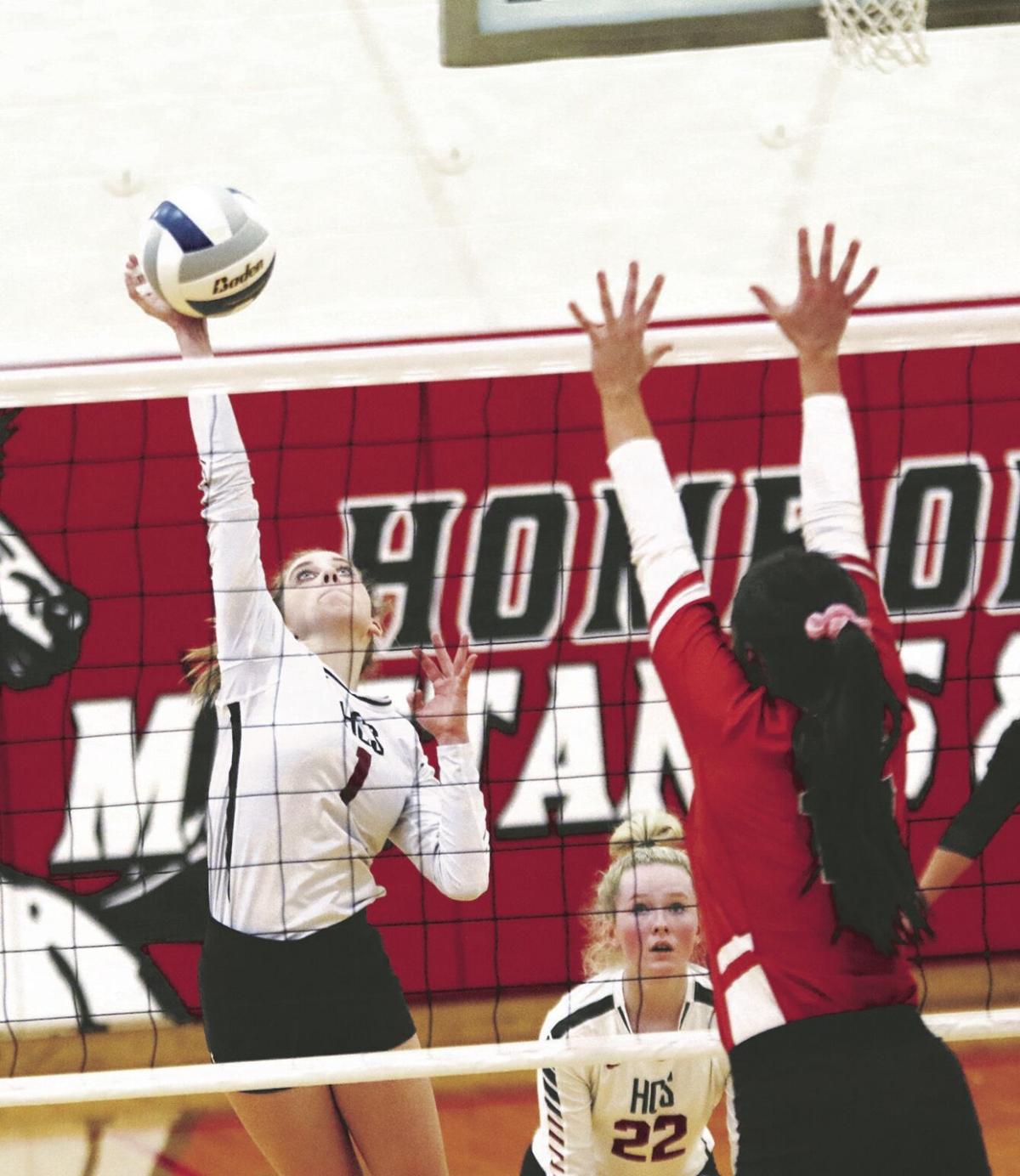 Junior Riley Goertzen (1) of Heartland crushes a kill past the block of Sutton’s Lily McCroden (17) during a second-round matchup in the SNC Volleyball Tournament on Monday evening. It was tough sledding for the Huskies in a two-set loss to the top-seeded Fillies, as Goertzen accounted for three of the team’s eight kills in the match. (News-Times/Christian Horn)

SUTTON – The Heartland Huskies earned the No. 8 seed for the Southern Nebraska Conference Volleyball Tournament, entering with a record of 8-18. The Huskies opened with a match against No. 9 seed Sandy Creek for the right to move on to face No. 1 seed Sutton.

Early kills from senior Ashley Brown and freshman Jaelyn Brown kept Heartland withstand a fast start from Sandy Creek, as the Cougars built a 6-3 lead in the first set. A kill from senior Ella Friesen got the Huskies within two, but Sandy Creek then went on a 7-2 run to extend the lead to 13-6.

After a Heartland timeout, the Huskies responded right back. A Cynthia Cerveny block gave Heartland a 3-0 run and after a Sandy Creek error, Jaelyn Brown ripped off three straight ace serves.

Suddenly the Heartland run had ballooned to 8-0 as the Huskies took a 14-13 lead, but the Cougars responded with three consecutive points of their own.

Heartland responded, tying the set at 16 on an ace from sophomore Hayden Mierau. Later, with the set deadlocked at 18 apiece, Sandy Creek took the lead on a kill from senior Jenna Heinz.

The Huskies countered with two quick points to regain a 20-19 lead before Jaelyn and Ashley Brown hammered consecutive kills and Cerveny followed with an ace. Heartland’s lead expanded to 23-19, and junior Riley Goertzen put the Cougars away with back-to-back kills to clinch a 25-19 win in the first set.

Sandy Creek opened the second set on a 10-5 run, but Friesen hammered back-to-back kills to keep the Huskies within striking distance. Later in the set, Mierau whacked two kills in four points to cut the Cougar lead to 14-12.

After a Cougars kill, Friesen answered with a winner of her own. The two teams traded points before a Mierau ace and Friesen kill capped a 3-0 Heartland run to even the set at 16.

Sandy Creek responded with five of the next seven points to regain a 21-18 lead, but a pair of Cougars errors cut the lead to one. Heartland junior Felicity Johnson crushed an ace to even the set at 21. Sandy Creek won the next point, but a pair of errors swung the advantage back to Heartland.

Ashley Brown whacked a kill to give the Huskies a 24-22 lead and cap a 3-0 run. Sandy Creek fought off one match point, but a Cougars error gave Heartland a 25-23 win to clinch a sweep.

Sandy Creek senior Leah Hatch notched a match-high nine kills as the Cougars finished the match with 19 kills to the Huskies’ 13.

Friesen hammered five kills to lead Heartland, four of which came in the second set to keep the Huskies in it before the closing 7-2 run. Jaelyn Brown added three winners, while Ashley Brown and Goertzen followed with two apiece.

Heartland held a massive advantage at the service line with seven aces to Sandy Creek’s two. Jaelyn Brown crushed a match-high three, followed by two from Mierau and one apiece from Johnson and Cerveny.

Cerveny led the Huskies’ effort at the net with a pair of solo blocks, while Mierau added a pair of assisted blocks and the Browns had one block apiece.

Heartland hung in the first set early on thanks to several Sutton miscues and built a 12-11 lead, but the Fillies closed on a 13-5 run to win the set 25-16. The top seed then overpowered the Huskies in the second set, opening on a 9-2 run and cruising to a 25-8 win to complete the sweep.

At the service line, Sutton sophomore Kennedy Perrien crushed four aces alone while Heartland had none.

Goertzen whacked three kills to lead the Huskies in the loss, followed by two from Friesen and one apiece from Johnson, Cerveny and Ashley Brown. Mierau added four blocks at the net, while Brown notched one.

With the loss, Heartland drops to the loser’s bracket, where they will face the loser of Monday night’s matchup between Centennial and Wilber-Clatonia tomorrow night in Milford.

STROMSBURG – The Cross County Cougars came out firing on all cylinders in their season opener Thursday night, outscoring the McCool Junction M…

The four-year starting quarterback and only three-time captain in school history is entering his name into the NCAA’s transfer portal.

RALSTON – Last season, the York Dukes hammered the Ralston Rams 84-11 at home to open the season. This year, the return trip was more of the s…

Mickey Joseph, a Husker quarterback in the late ‘80s and early ‘90s who's spent the last five years on LSU's staff, is finalizing a deal to become Nebraska's new wide receivers coach.

Heartland senior Ella Friesen (22) rises for one of her five kills in a win over Sandy Creek during the SNC Volleyball Tournament in Sutton on Monday evening. The Huskies toppled the Cougars 25-19, 25-23 but lost to 1-seed Sutton in the second round. (News-Times/Christian Horn)

Junior Riley Goertzen (1) of Heartland crushes a kill past the block of Sutton’s Lily McCroden (17) during a second-round matchup in the SNC Volleyball Tournament on Monday evening. It was tough sledding for the Huskies in a two-set loss to the top-seeded Fillies, as Goertzen accounted for three of the team’s eight kills in the match. (News-Times/Christian Horn)