The All-America middle blocker committed to the Huskers in 2014 when she was a high school junior. She’s been in Lincoln since 2016, playing for the Huskers the past five seasons.

But there is someone in her family who has an even longer history with the program.

Lincoln resident Opal Stivrins, Lauren's grandmother, has had season tickets for Nebraska matches since the 1990s. She still has those tickets, and for the past few seasons she’s gotten to watch her granddaughter be one of the team's stars.

Think about how great that must be.

And while going to the matches and seeing Lauren Stivrins smash down kills and play with a mix of fire and joy has been a treat, Stivrins coming to Nebraska also allowed Opal to get to see her more than she did when Lauren was growing up in Scottsdale, Arizona.

“It has been an absolute gift to have her here because most of my grandchildren were close and I was able to attend their activities,” said Opal Stivrins, the 82-year old grandmother of 12 and great-grandmother of seven. “And I only got to see Lauren when I would go to Arizona in the winter for a couple of weeks, or when I traveled to one of her club tournaments. So it has really been wonderful.”

Opal’s husband was Kaz Stivrins, and she’s the stepmother to Lauren’s dad, Alex, who grew up in Lincoln. Alex’s mother, Patricia, passed away in 1989. Opal has been part of the family since 1991.

Kaz passed away in 2008 when Lauren was 10. Kaz and Opal spent several weeks in Arizona each winter and would watch Lauren and her siblings in their activities.

Opal Stivrins was hooked on Husker volleyball for many years before Stivrins joined the team. She loved the players, being part of the fan base, and, well, that they won a lot.

So what’s it like when your granddaughter is actually on the team?

“It’s exciting, of course,” Opal Stivrins said. “I think it’s been nice for the whole family to have her here. Her freshman year I know she called me one day and she said, ‘Grandma, I’m really sick. I have mono and they tell me I have to get out of the dorm. Can I come stay at your place?’ So I had her here for a couple of weeks.”

When Lauren was growing up, her family wasn’t always able to travel to Lincoln for every holiday.

Now, the family has gotten some more time together.

“It’s just been nice to have her here,” Opal Stivrins said. “But you also have to stand back and let her have her college, and make her way. And I think the whole family has done that. We’ve been here if she needed us. And when we’ve wanted to see her she’s been very gracious about her time. But she has to have her time, too. And when she’s hungry she’ll call and say, ‘I’d like to come for dinner.’ And that’s great to just have her come and visit and have dinner.”

For Lauren’s first few years in the program, Opal rarely missed a home match. This season, due to an illness, she hasn’t been able to attend every home match, but she has all the digital TV subscriptions she needs to watch.

John Cook on the radio: Coach questions three conference champions (and Nebraska) being in same region for NCAA Tournament

And Opal made sure she was at the Devaney Sports Center for Lauren’s Senior Day ceremony two weeks ago, sitting in the sixth row behind the Husker bench and wearing a sweatshirt with Lauren’s name and jersey number on it.

Lauren’s sister, Amber, is on the volleyball team at Georgia, and Opal also traveled to watch her play this season.

And since Lauren started playing for the Huskers, Opal has taken on a new identity.

“I have to tell you, before Lauren came here I was known as Opal Stivrins, and now I am Lauren’s grandma,” Opal Stivrins said. “People know. Most of my friends save all of the newspaper clippings for me. And I get a lot of texts and things. When I’m at home for games, I have a couple of friends that are avid volleyball fans, and they’re texting me the whole time.”

Brawl breaks out between Cowboys, 49ers fans outside AT&T Stadium

If NCAA approves it, Kayla Caffey plans to play for Nebraska volleyball in 2022

Jordan Larson will wrap up her playing career then jump right into a full-time gig with the Longhorns. Here's how it all came together.

Reyes has been key to Nebraska’s success in recruiting and with coaching Nebraska’s back-row defense.

'She's a fierce competitor': What made Lauren Stivrins one of the all-time great Nebraska volleyball players

The short list of her accomplishments includes being named AVCA All-American three times, winning the national championship as a redshirt freshman starter in 2017 and two runner-up finishes. 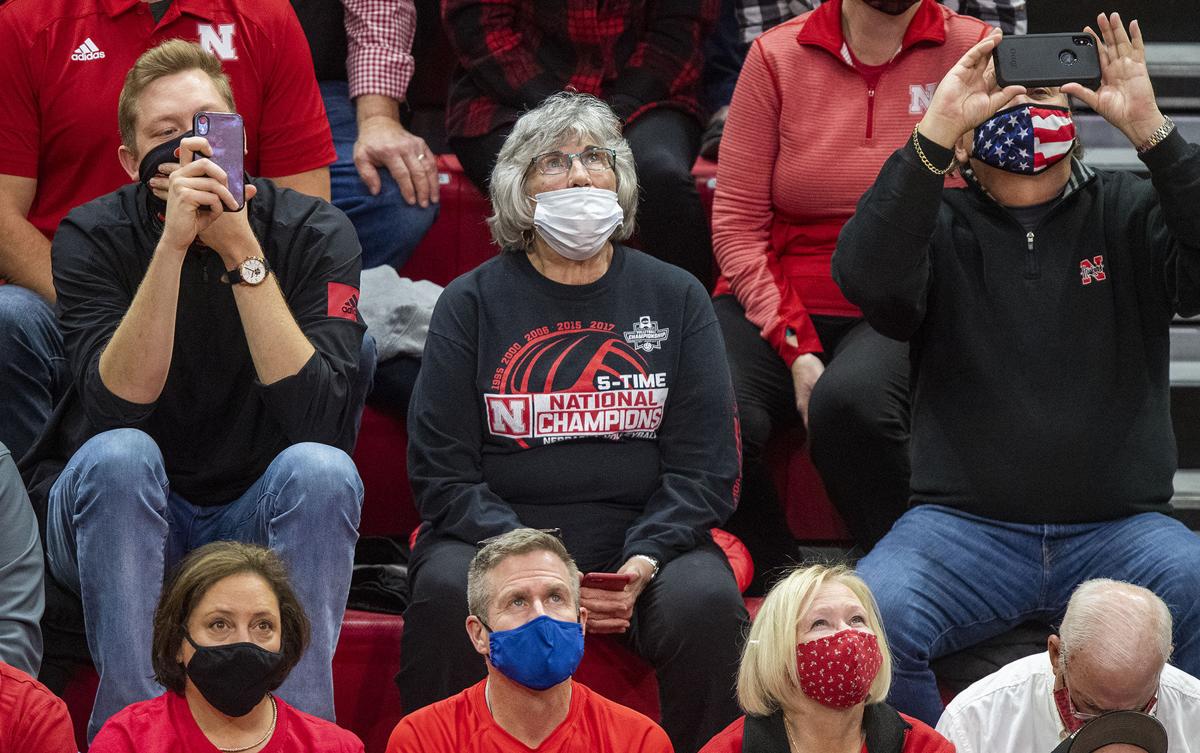 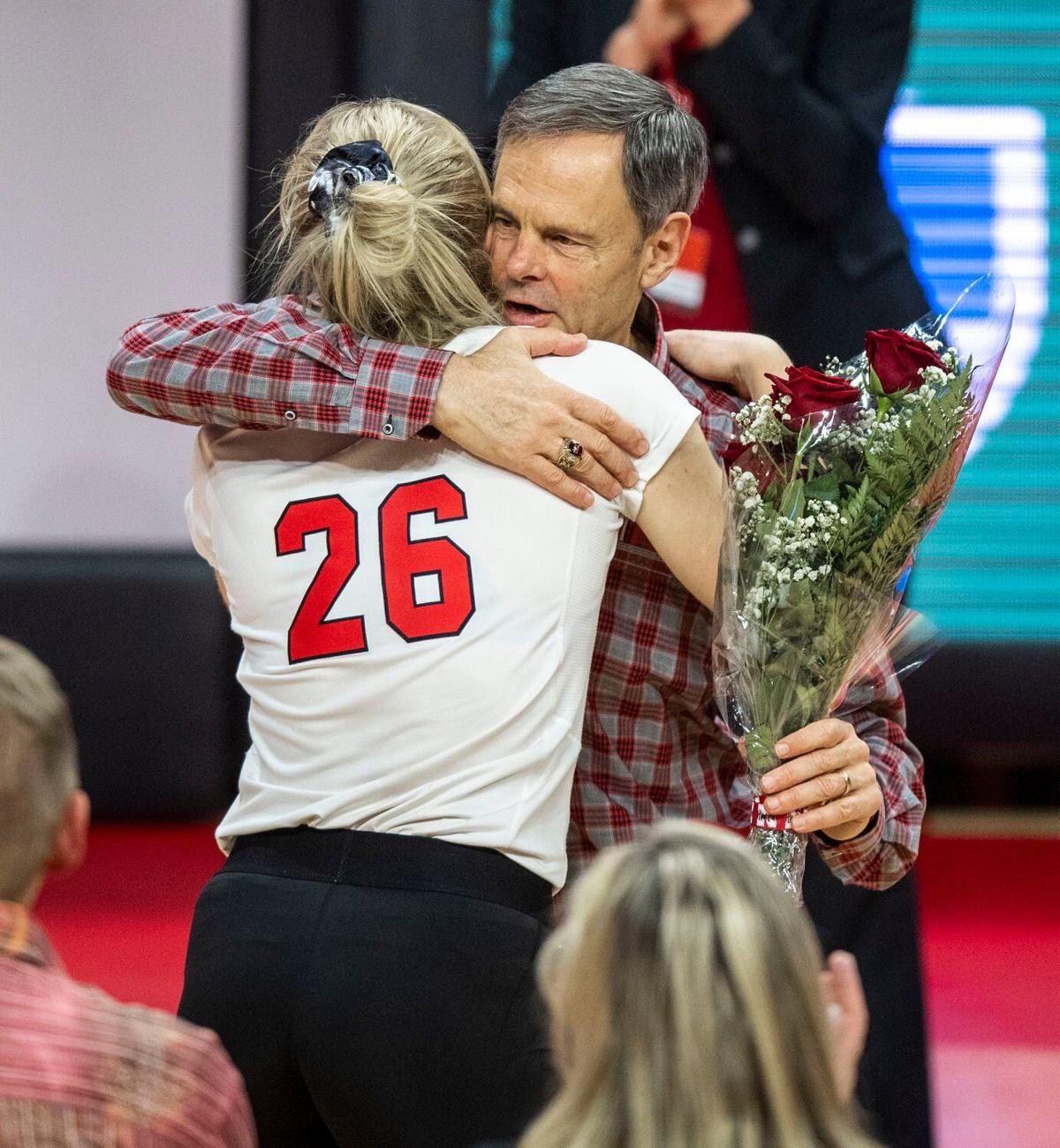 Nebraska’s Lauren Stivrins (26) gets a hug from coach John Cook during the Senior Night festivities after the Huskers defeated Penn State 3-0 on Nov. 19 at the Devaney Sports Center.