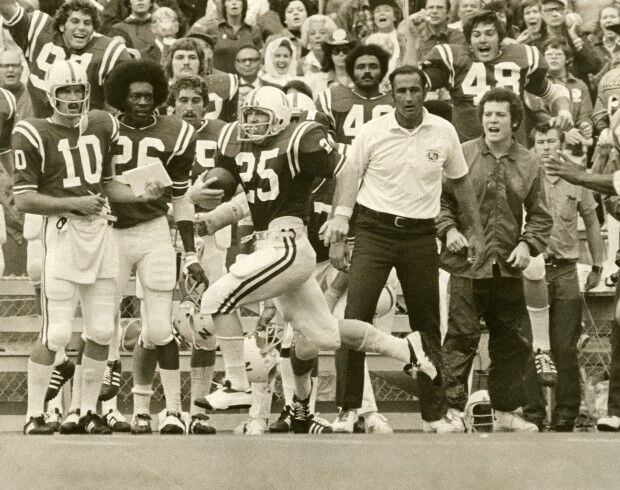 There’s still something mystical about Nebraska and Oklahoma competing on a football field.

There’s a history between the programs that elicits strong reactions from all sorts of people, especially those familiar with the rivalry’s most intense moments.

So, what does this year’s game, the first between the programs since 2010, mean in Washington’s eyes?

“It is probably a chance to recreate yesteryear,” says the two-time All-American halfback (1974, 1975), one of the most electrifying players ever to play for Oklahoma.

Washington sounds a bit skeptical of genuine OU-NU magic being recreated Saturday, especially at the level of the 1971 “Game of the Century."

If you really think about it — and consider how many times Oklahoma-Nebraska affected conference championships and even the national championship race — Washington’s skepticism is well-founded.

“To be honest with you, what it really means is a chance for me to get back together with Tony Davis and the other guys,” Washington said of the Nebraska running back great of the mid-1970s. “You get to see everybody — your teammates and so many others. It’s not so much about celebrating this year’s game, but this year’s game has given us a chance to celebrate each other. You know what I mean?”

Oh, it makes perfect sense. There will be dozens of former Nebraska and Oklahoma greats on hand this weekend in Norman, Oklahoma.

Davis will be among them. He loves this stuff. He will be a guest speaker Friday night at an Oklahoma alumni event, and also will be among former Huskers on-hand for an event Washington is hosting simultaneously at a lounge near the Oklahoma campus.

“We’ve probably had more requests (for Washington’s event) than we have room,” Davis said with a measure of pride.

Washington markets his own cigars. Which makes perfect sense, considering how he used to “smoke” defenders, leaving them in his wake.

Come Monday, Washington and Davis will play in an annual charity golf event in Tulsa, Oklahoma, along with several former teammates. That tournament, in fact, has been the impetus to many Sooner-Husker bonds being formed over the years.

Make no mistake, Davis will watch Saturday’s 11 a.m. game intently. But if the Huskers are to fall, as widely expected, Davis will nevertheless wear a smile all weekend.

He’ll be among friends, including Washington, who echoes Tony’s sentiments.

“You get to be in the presence of Nebraska guys when you’re not keyed up and getting ready to bang and get your brains knocked out,” said the 68-year-old Washington. “We don’t have to put on a helmet and get our ankles taped anymore.

"We’re at that stage now where, hey, we have a little softer life.”

He pauses, as if to soak in his own words.

“It’s really nice that we can do this, and that it was the kind of rivalry that created friends — and many will be down here (in Oklahoma), and they’re closer to 100 years old than they are 1,” Washington said with a laugh.

Davis, also 68, celebrates what he characterizes as an ultra-competitive rivalry that evolved into a pervasive feeling of respect among combatants.

In fact, Davis makes an important distinction: Don’t call it a friendly rivalry, he said, call it a respectful one.

“When we teed it up and got those ankles taped, hey, it was goodnight, Irene,” he said. “But it was a rivalry that you were able turn on and turn off.”

That’s because of the respect factor.

“It was, hey, we’re two of the bad-ass programs in the country, and we have been for all these years — with how consistent we were — and it so often came down to us,” Washington said. “You’ve got to respect that."

Said Davis: “Let’s face it, the national championship often ran through Oklahoma and Nebraska. I mean, shoot, you had to beat us to get there. That’s kind of the way we looked at each other. We were two of the best programs in the country, and we were in the best conference in the country. At least that’s the way we felt about it.”

As was the case with Oklahoma’s program during much of the 1990s, Nebraska has fallen on hard times. Along those lines, both Washington and Davis were aware that Nebraska tried to pull out of this year’s game, as was first reported in March.

Yes, it happened. It’s a fact, as disappointing (and remarkable) as it still feels.

Washington is just glad it all worked out for the best.

Davis chooses his words carefully on the matter.

“I just trust that Scott (Frost) knows what he’s doing,” he said in reference to Nebraska’s fourth-year head coach.

By the way, Frost fully understands what the rivalry’s about. The former Husker quarterback participated in it and may even communicate its significance to his players.

But truly capturing its essence? Good luck with that.

Frost will have a better chance of guiding his team to an upset.

A chain-link fence actually played a key role for Nebraska in 1987 when it signed ballyhooed QB recruit Mickey Joseph.

A native of New Orleans, Mickey Joseph spent five seasons on Ed Orgeron's staff at LSU, and left an indelible impression as recruiter and coach.

Steven M. Sipple: Martinez's remarkable grace and three other takeaways on his departure

Nebraska quarterback Adrian Martinez was forever calm and positive in an environment that often became tense and negative because of all the losing.

Those with knowledge of Cam Jurgens' situation say recent projections suggest he could be drafted in the middle rounds — the third, fourth or fifth.

Donovan Raiola knows what Nebraska football is all about. He'll come to Lincoln to create a legacy. He'll come breathing fire. He's a Raiola. Say no more.