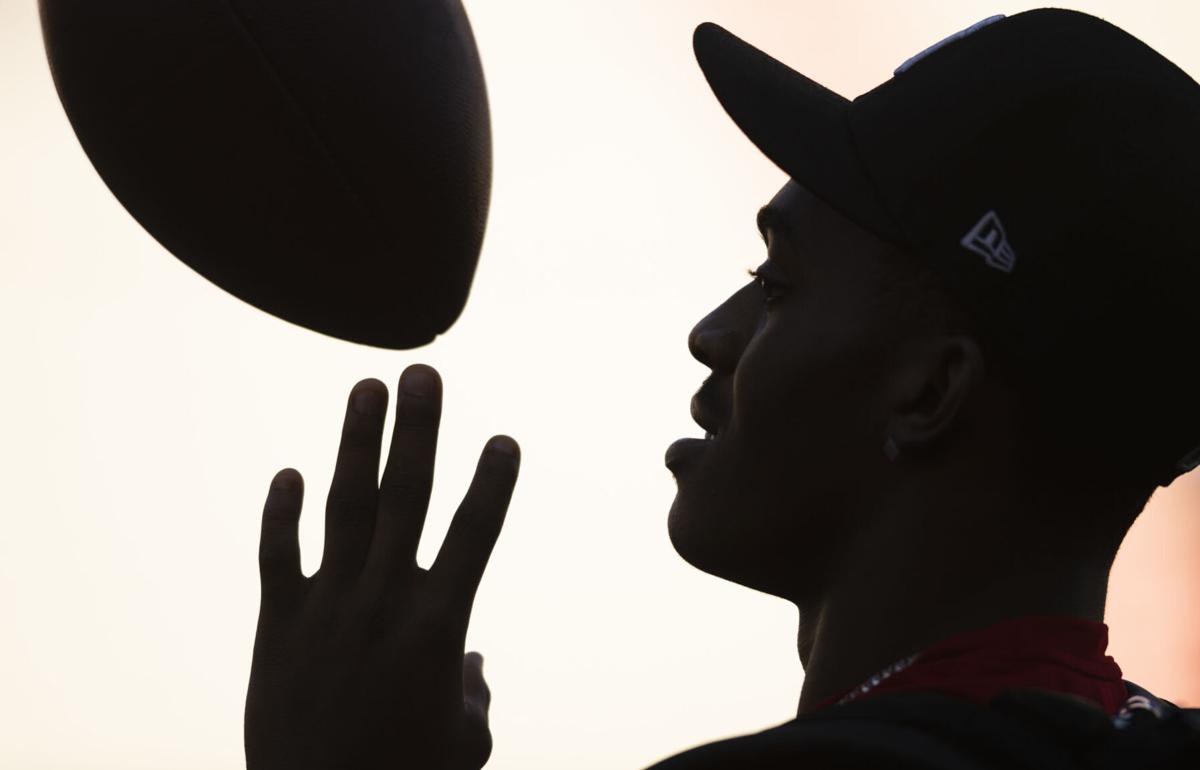 A player tosses a ball while talking with teammates during the Friday Night Lights camp on Friday at the Memorial Stadium. 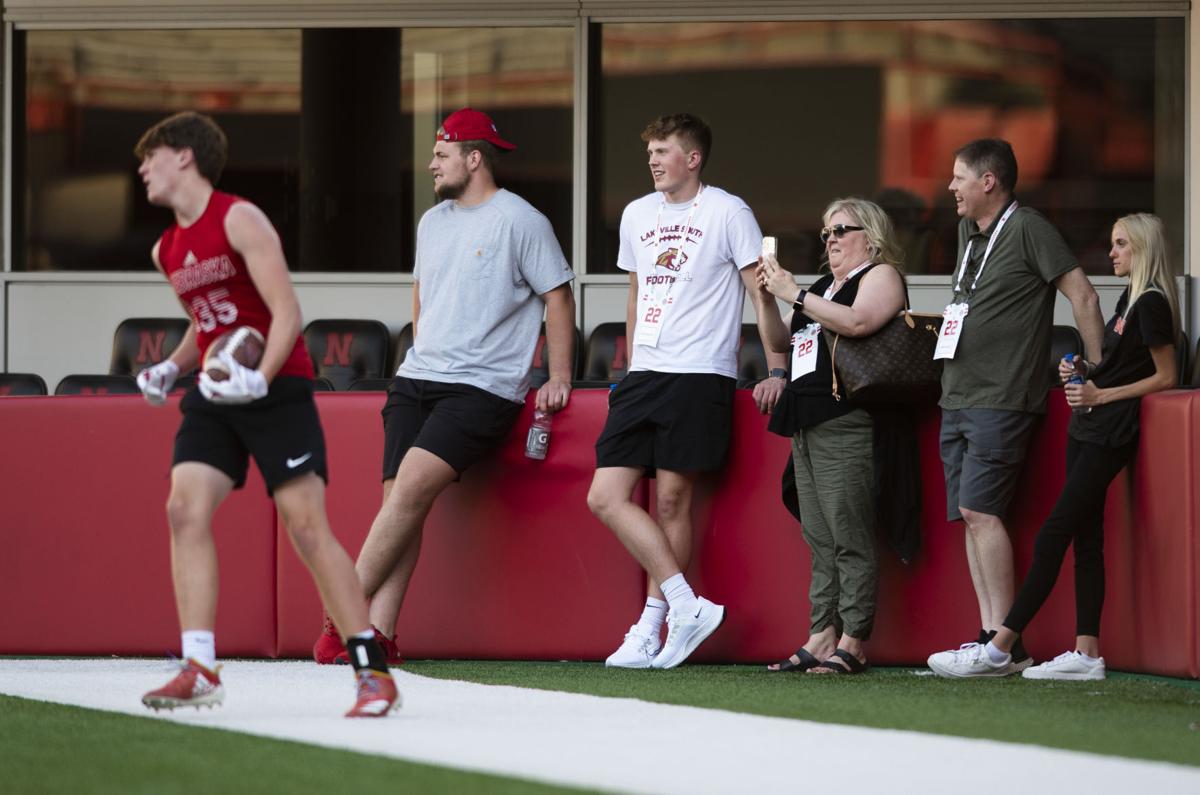 When the sought-after Class of 2022 defensive lineman from Arkansas finally met them in person on his official visit to Lincoln this weekend, he was not disappointed.

"They're exactly the same. They didn't change one bit from the Zoom calls," Davillier told the Journal Star. "They're still showing the same love they showed me on Zoom and they're always keeping it real. ...

Class of 2023 in-state football players' stocks are rising. Can the Huskers capitalize?

The 6-foot-4, 275-pounder spent a good chunk of the weekend with defensive lineman Casey Rogers.

"Me and Casey, we just clicked as soon as I first saw him," Davillier said. "We had some conversations about recruiting in general, what made him go to Nebraska and all of the deciding factors that he chose. I'd have to say, me and Casey are definitely going to keep in touch."

Now, the Maumelle, Arkansas, native is heading to home-state Arkansas for an unofficial visit this week and then a visit to Oklahoma on the weekend of June 18. He said earlier this year that he plans to verbally commit at the end of the month and, as of right now, that's still the plan.

In the meantime, Nebraska only helped its standing on the first weekend of June.

"Overall, it was great. I loved every part of it," Davillier said. "Just the experience was great and the coaches and the players and the staff, they all made me feel welcome."

What perfect timing, then to get in his official visit to the school that's been recruiting him for more than a year?

"It all worked out really well," Marshall said.

The 6-5, 275-pound defensive lineman didn't just come to Lincoln out of expediency, though. He made the trip from the Kansas City area for the Red-White Spring Game on May 1 and returned the first weekend he could for an official visit because the Huskers have recruited him hard and made him a priority and he can see himself potentially playing at NU.

"It was great," Marshall said of the visit. "Lincoln feels just like downtown Kansas, but it's three hours away. I like it a lot."

Marshall got to campus Friday afternoon and went right to Memorial Stadium for a tour and meetings. He hung out with the staff and then Damion Daniels, Rogers and Davillier.

"It was great because I feel like I've been in contact with the staff for like a year, so I felt like I knew them already," Marshall said. "Hanging out with the players was great. They were funny and they gave me all the information I needed to know about Nebraska. It's different coming from a player than it would be from a coach."

Tuioti told Marshall in a meeting on Sunday before he left campus that the staff thinks Marshall can play anywhere on the defensive line.

Marshall is visiting Oklahoma State midweek, then heading to Indiana on the weekend of June 18 and added he may also take a visit to Arizona State.

He came away impressed even still.

"We had high expectations and they even exceeded them," Androff told the Journal Star.

The tight end who plays at Lakeville South (Minnesota) High was hosted by Bryce Benhart, who starred at Lakeville North.

"The Minnesota boys pretty much teamed up," Androff said.

The tight end said he was glad to finally meet the coaching staff, in particular tight ends coach Sean Beckton, who's been his primary contact as a potential future position coach.

"It was amazing," he said. "First time actually getting to meet these people that you've been talking to pretty much every day for months. Nebraska did a really good job with everything being coordinated, on time, having stuff for us to do, having fun."

"They said they're really excited for me because they think I bring a valuable asset because I know how to block and a lot of (high school) tight ends don't. But they also have seen my speed and athleticism and they know I have the ability to catch the ball, I just haven't been able to show it."

Androff (6-6, 230) is slated to take official visits to TCU and Michigan State, respectively, the next two weekends.

He'll have familiar eyes on him, too.

Nebraska quarterbacks coach Mario Verduzco and a couple of other Husker assistants will be at the camp in Dallas, meaning Verduzco will get to see Torres work live after having him as a visitor in Lincoln from Thursday through Saturday.

Torres did not return a message left by the Journal Star on Sunday, but he is expected to take an official visit to Kansas State next weekend and then perhaps make his college decision sometime shortly after that.

Could there be a hole in one at the US open?

Could there be a hole in one at the US open?

'He can make every throw under the sun': 2022 QB Richard Torres commits to Huskers

Nebraska has its 2022 quarterback after securing a verbal commitment from three-star San Antonio native Richard Torres.

New Nebraska defensive back Tyreke Johnson explains what sold him on Nebraska, how difficult it was to leave Ohio State and more.

Nebraska landed a verbal commitment from Ohio State transfer DB Tyreke Johnson, who is eligible immediately and has three years of eligibility.

Road trips, camps and 'birds in the hand': Georgia DB Quantaves Gaskins under the radar no more after wild week

June has been a recruiting blitz with the end of the NCAA's dead period. Not many have had a first week wilder than Georgia DB Quantaves Gaskins.

Class of 2022 defensive back Markeith Williams has some family connections to Nebraska, but said his official visit still was an eye-opening one.

It's going to be another big recruiting weekend on campus. Meet Nebraska football's six official visitors

The crop of a half dozen all are coming from considerable distance. In fact, no official visitors reside in a Central time zone.

A player tosses a ball while talking with teammates during the Friday Night Lights camp on Friday at the Memorial Stadium. 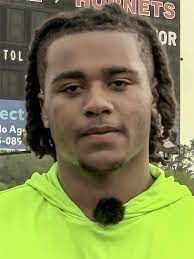