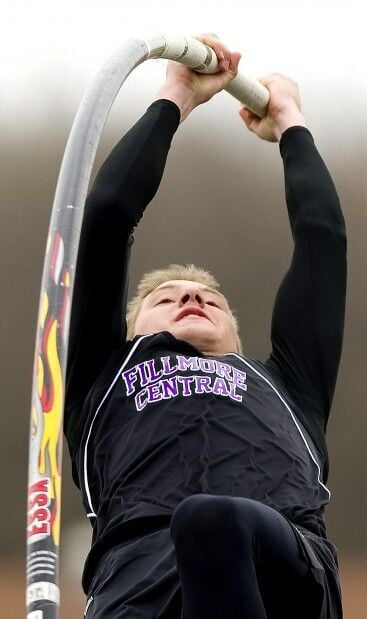 Fillmore Central's Tyler Loontjer won the boys pole vault with a height of 14 feet during the Dan Tesar Invitational in 2013 at Tri County High School.

Glen Loontjer had a front-row seat to watching his son Tyler break his Husker mark of 17 feet, 9 inches last week in Bloomington, Indiana. Tyler went 17-10 to win the event title.

Tyler Loontjer wanted to raise the bar in college.

When he arrived at Nebraska, among his top goals was passing his father on the school's all-time pole vault chart.

Life, however, was set to throw some wicked twists.

Hamstring injuries hampered him early in his collegiate track and field career, but those seemed like a pinch to the arm compared to what was to come.

He broke his leg in his second outdoor competition of what was supposed to be his final season with the team in 2019. A medical hardship allowed him to come back for a sixth season.

Then another setback, and a scary one. Loontjer was involved in a motorcycle accident that required surgery and set his training back even more. Then COVID-19 took away the 2020 outdoor track season.

Gosh, who would have blamed Loontjer for deciding to put the pole down for good?

"That was kind of the thing coming back this year is, well, is it worth it?" said Loontjer, who was given a chance to return for a seventh season after the NCAA awarded an extra year of eligibility to last year's spring seniors.

The Fillmore Central graduate strongly considered putting track behind him, trading poles for a lifetime membership card to the real world and diving deeper into his real estate career, which already was in motion.

One conversation changed that. It was Dad.

Glen Loontjer, who also serves as a volunteer assistant for the NU track team, didn't want his son to have any regrets. He wanted Tyler to go farther and higher, and yes, beat his Husker mark of 17 feet, 9 inches.

"Obviously having a senior season taken away due to injury and then COVID taking another year away … there was definitely doubt of not coming back," Tyler Loontjer said. "And one day my dad and I were sitting there and he was like, 'You're going to look back in 30 years and probably regret that you didn't do it more so than the regret that you did do it.'"

Loontjer took a leap, and it paid off last week in Bloomington, Indiana.

Loontjer's dad coached track at Fillmore Central. His older sister Meg was a Class B state pole vaulting champion before headed to Wichita State. Loontjer also was a state champion, winning all-class gold with a state-meet-record leap of 16-2½.

When Loontjer got to Nebraska, he wanted to pass his father on the Huskers' all-time charts. Glen went 17-9 in an indoor meet in 1984, a height that ranks sixth on NU's indoor charts, and sixth overall when including outdoor records.

Loontjer had some work to do to catch his father. His season-best leap as a redshirt freshman was 16-8. But he gradually started to clear higher marks, including 17-4½ his senior season at the Texas Relays.

But that's also where Loontjer's season came to an abrupt finish.

"I ended up running through on a jump and went on the back of the mat and came down wrong and basically broke my leg right above my ankle," he said. "Ended up having surgery and was off that (leg) for three months."

Loontjer received a medical hardship, allowing him to redo his senior season in 2020.

Glen Loontjer, obviously, has been a big part of his son's life as his father and high school coach. The two met up again on the pole vault runway when Glen joined the Husker track team as a volunteer assistant in the fall of 2019.

It was his second stint as a coach for Gary Pepin. After wrapping up his vaulting career at Nebraska in 1984, Pepin asked Glen Loontjer if he wanted to join his staff and coach the pole vaulters. He did so for nine years before focusing on raising a family with his wife, Lori.

Taking on a small role at NU allowed him to continue running his family hardware business in Geneva while also being able to get back into coaching. It also allowed him to coach up his son one last time.

"It's a ball," Glen Loontjer said. "It's fun to coach all the kids.

"When you're a coach and a kid does well you really feel good for them and you're happy for them, and when it's your own kid and he does well and you get to be a part of it, it's just like about quadruple as much fun."

Glen Loontjer was working with the pole vaulters at a September practice when Tyler alerted him he was running behind. And then it got later and later.

"I didn't think much of it as I was helping the other guys," Glen said. "I get a phone call from him and he goes, 'Where you at?'

I said, 'Just getting done with practice. Where you at?'

He goes, 'You might want to stop by the hospital.'"

Loontjer had been involved in an accident. A van quickly turned in front of his motorcycle and he collided with it. He was in the hospital for a couple of days and needed surgery to repair a ruptured spleen.

Once again, Loontjer's training to best his father's mark was put on hold.

Because he had exhausted his indoor eligibility at this point, Loontjer, outside of competing as an unattached athlete at the Prairie Wolf indoor meet, turned his focus to the 2020 outdoor season.

It never got started because of COVID-19.

It was heartbreaking, Loontjer said, and he began thinking about life after track. He already had his real estate license and had been working for Coldwell Banker Real Estate in Lincoln.

But Loontjer, like all spring sport athletes, was handed a mulligan by the NCAA. He could return for his seventh season, and third as a senior competitor.

Loontjer, however, told his dad that maybe this was enough.

"I said, 'Tyler, when you get to my age and somebody would have said, "Hey, you want to come back one more time and have a chance to jump?" I couldn't have said yes fast enough.

Not only did Loontjer decide to come back, but his level of commitment and training also reached new heights, too.

Working with his father, Loontjer made numerous technique tweaks, began envisioning what a perfect pole vault attempt should look like before he gets on the runway and changed training habits.

"We looked at the pros, kind of what they were doing and basically tried to mimic it," Loontjer said.

Healthy and confident, Loontjer and his Husker teammates competed in the first Big Ten outdoor meet of the season on March 26 in Bloomington, Indiana. It marked Loontjer's first competition as a Husker in two years since breaking his leg in Texas.

Not only did Loontjer record a podium-topping finish, but he also did so with a career-best mark of 17 feet, 10 inches, which placed him fourth on NU's all-time charts. He cleared his dad's mark. Then he did it again, winning the B1G North Florida Invitational with a 17-9 clearance Saturday in Jacksonville.

"An unbelievable feeling," Loontjer said. "Worked a lot of time and a lot of hours towards it."

The bar was raised to 18 feet and Loontjer was unable to clear it. But that didn't take away from the moment, which came late that Friday night. The men's pole vault event didn't start until 10:30 p.m. Eastern time and didn't finish until closer to midnight.

"There was hardly anybody in the facility because everybody got tired and got home, so it was kind of funny," Glen Loontjer said. "We were kind of loud and it didn't really matter because there was only about 20 people in the whole facility left. It was a great moment and my wife, Lori, was down there to see it, too."

Within an hour or so of returning to the hotel, Loontjer was already watching film of his performance, looking for ways to clean it up.

"Honestly, 18 foot is the goal," Loontjer said. "Beating Dad was a milestone, but I guess I want more on top of that."

What ultimately had Loontjer come back for another track season?

Nebraska has multiple meets coming up, which means more chances for Loontjer to aim for and clear 18 (The school record is 18-8¼ by Eric Eshbach in 2004).

It's been a busy spring for Loontjer. Because he's at full health, he's training every day, and also showing houses for Coldwell Banker. On Tuesday he showed a house at 5:30 p.m. and was at practice a half-hour later.

When his track career does come to a close, he'll either become a full-time real estate agent or go back to Geneva to help his father at the hardware store.

Loontjer is trying to enjoy the season the best he can. So, too, is his father, who said this has been his most enjoyable year as a coach.

Through injuries and more, Loontjer said he is happy he followed through on his father's advice.

"Sometimes I guess I listen to him," Loontjer said, having some fun with it. "I'm just glad that he said something when he did because I wasn't really even thinking of coming back and then he started talking about and got me thinking."

Proving the adversity bar can be cleared, Loontjer now chases a new one.

Reach Clark Grell at 402-473-2639 or cgrell@journalstar.com. On Twitter at @LJSSportsGrell.

NU coach Paul Klempa: "The team executed both physically and emotionally exactly how we had planned and prepared.

Dukes take to the track, field at Central City

Fillmore Central's Tyler Loontjer won the boys pole vault with a height of 14 feet during the Dan Tesar Invitational in 2013 at Tri County High School. 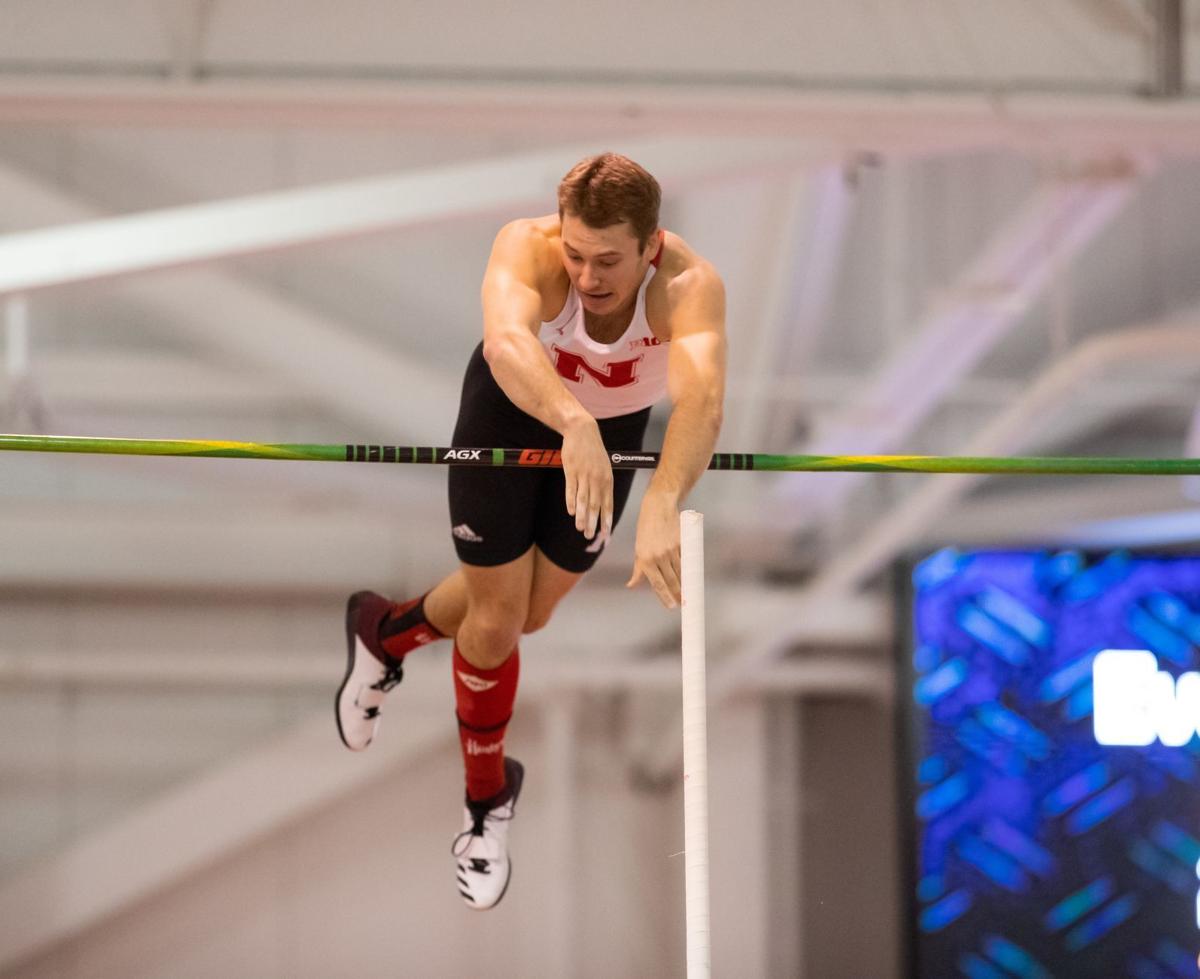 Tyler Loontjer competes in an indoor meet at the Devaney Sports Center on Feb. 15, 2019.

Glen Loontjer had a front-row seat to watching his son Tyler break his Husker mark of 17 feet, 9 inches last week in Bloomington, Indiana. Tyler went 17-10 to win the event title.