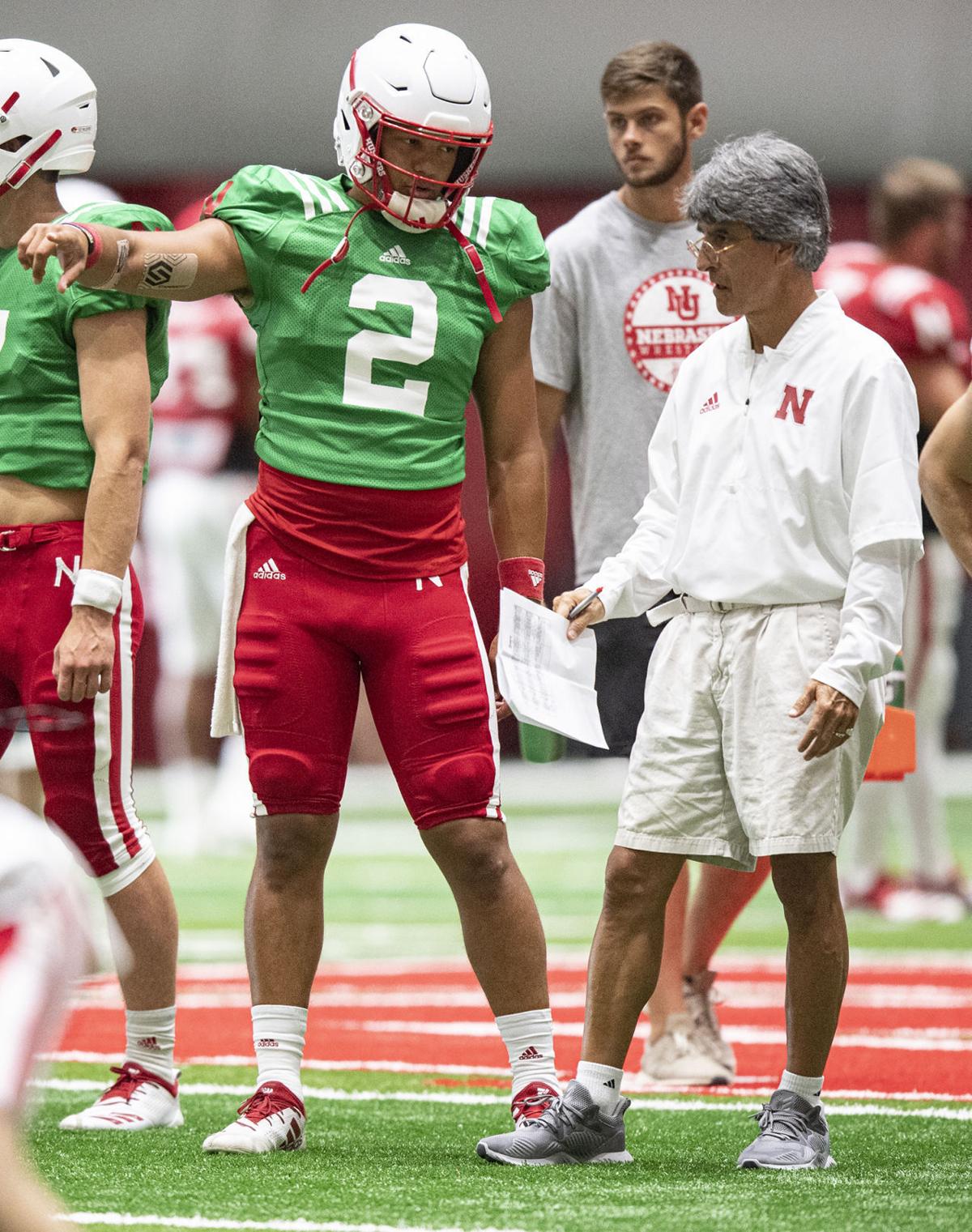 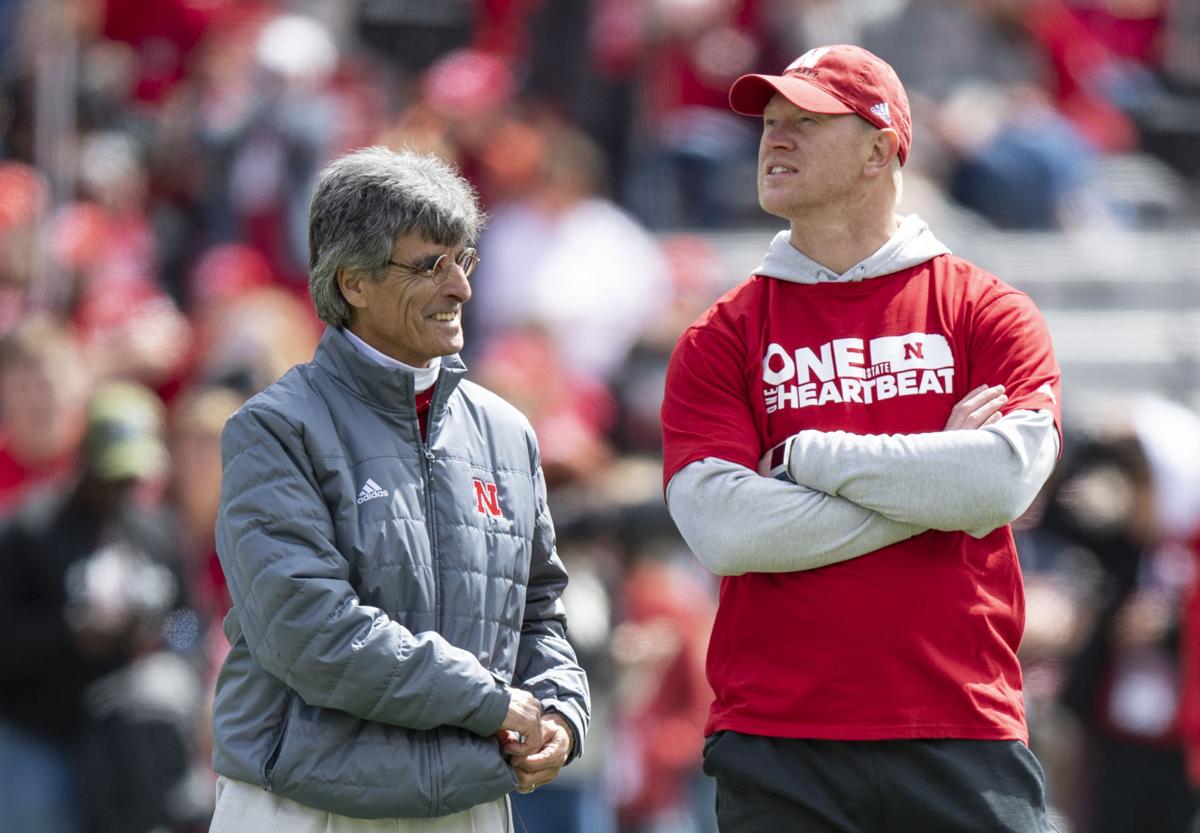 And, to be clear, the assistant likes where freshmen Logan Smothers and Heinrich Haarberg, along with junior walk-on Matt Masker, are at overall. There just hasn’t been a ton of opportunity to see the trio in live action.

“From a knowledge standpoint, really comfortable,” Verduzco said Monday. “The guys in the room know the offense, including Haarberg. Now it’s just a matter of them getting some operating time with it.

“If something were to happen to Adrian, I feel like those guys would be able to step in.”

From limiting turnovers to self-motivation, Adrian Martinez is focused on an offseason of growth

Just bloggin': Martinez on Robinson and McCaffrey: 'You have to do what's best for you'

Verduzco said the challenges for Haarberg and Smothers are similar this spring in the sense that both need a lot of reps.

Smothers has put on 10 or 11 pounds and gained a good grasp of the system and the signals last year.

“His reps during the fall were obviously limited, so … just getting the opportunity to take snaps, make the right keys and reads and put the ball where it needs to be put,” Verduzco said.

Haarberg, the Kearney Catholic graduate, arrived in January with the type of physical skill set the staff saw on film.

“He’s pretty clean,” Verduzco said of Haarberg’s throwing motion. “So he’s learning our drop-backs and the mechanics with regards to those and how they apply to different pass routes and pass patterns. He was a pretty clean cat, what we saw on tape was pretty much what we got, which was good.”

Verduzco deferred to coach Scott Frost about whether NU might need to look for a transfer quarterback after spring ball but didn't shy away from the fact that this month matters for the young guys in his group.

"Obviously that’s going to have some bearing on it, no doubt," he said.

Wide-open RB race: Nebraska running backs coach Ryan Held has a full room of runners, and he was unwilling to tip his hand as to which ones are atop the depth chart.

After all, Monday marked only the fourth day of spring drills, and just the second in pads.

“The cart is not going to be ahead of the horse here,” he said. “We’re just going to keep playing, keep practicing. There isn’t a bell cow, so to speak. We’re going to find who those guys are going to be. Because we can’t have just one guy. We have to have multiple guys who can execute our offense.”

He expressed confidence the situation would “shake itself out” in advance of the Aug. 28 opener at Illinois.

“But I’m not ready to anoint anybody, yet,” he said. “That’s the beauty of spring ball. There’s a lot of opportunity for good reps.”

If not for some health issues, another true freshman, Sevion Morrison,  would’ve contributed, Held said.

"Last year, he was rolling and then ended up getting COVID and was knocked out for three weeks," the coach said. "He tried to get back with a week left, and it was just hard to get him going. If he wouldn’t have gotten knocked out with COVID last year, he definitely could’ve contributed toward the end of the year when we were a little thin at that position."

Special teams are indeed an emphasis.

“It’s way bigger of an emphasis this year,” receiver Levi Falck said. “We start out every practice with special teams. We’re moving full speed on every drill. Yeah, we definitely need to make a huge improvement there this year.”

Nebraska last season started practices with what Falck described as a "team tempo" period pitting the offense versus the defense. Special-teams work came right after that, he said.

“If that’s the first thing you’re going to do, that’s the biggest emphasis of the day,” he said. “It makes a big difference.”

Vokolek filling Stoll's shoes: Junior tight end Travis Vokolek is doing his best to replicate the departed Jack Stoll, both on the field and off.

Vokolek answered questions from the media Monday sporting a mullet that would have made Stoll's blush. And as he spoke, he talked about taking on more of a leadership role now that Stoll has moved on to the next level.

"I think Austin (Allen) and I are two veterans in our room, and two veterans on the team," said Vokolek, now in his third year in the program. "So I think that my leadership role — I need to step up and hold guys accountable and get on guys' rear ends when things aren't going well. And get on the guys when things are going well, too."

Easy decision: Falck, a graduate transfer receiver from South Dakota, played in all eight games with four starts in 2020.

After having 13 receptions for 122 yards and one touchdown, he easily could’ve moved on with his life and took a job in the business world.

Why do that when you can play football?

That was the sentiment he expressed Monday.

“That (returning to play in 2021) was always the plan once I figured out I was going to be able to come back,” he said. “Especially since the year (2020) didn’t go as planned. But I know how good this team can be. With the whole defense coming back, and our offense looking like it's improving, there was no question I was going to come back.

“We’ll see what we can do this year. I think it’ll be good.”

Steven M. Sipple and Parker Gabriel talk through what they found most interesting and informative about the first week of Nebraska spring foot…