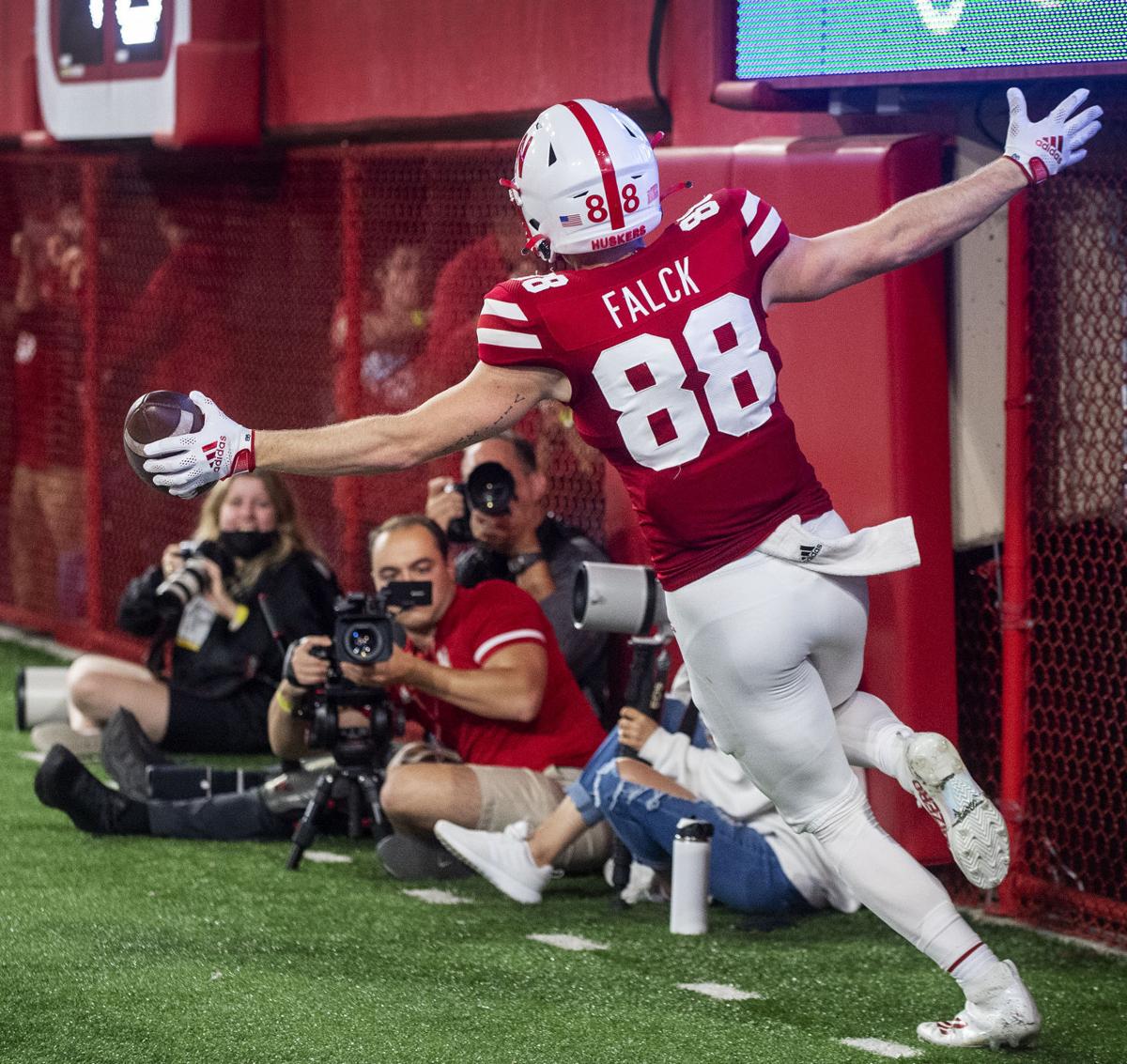 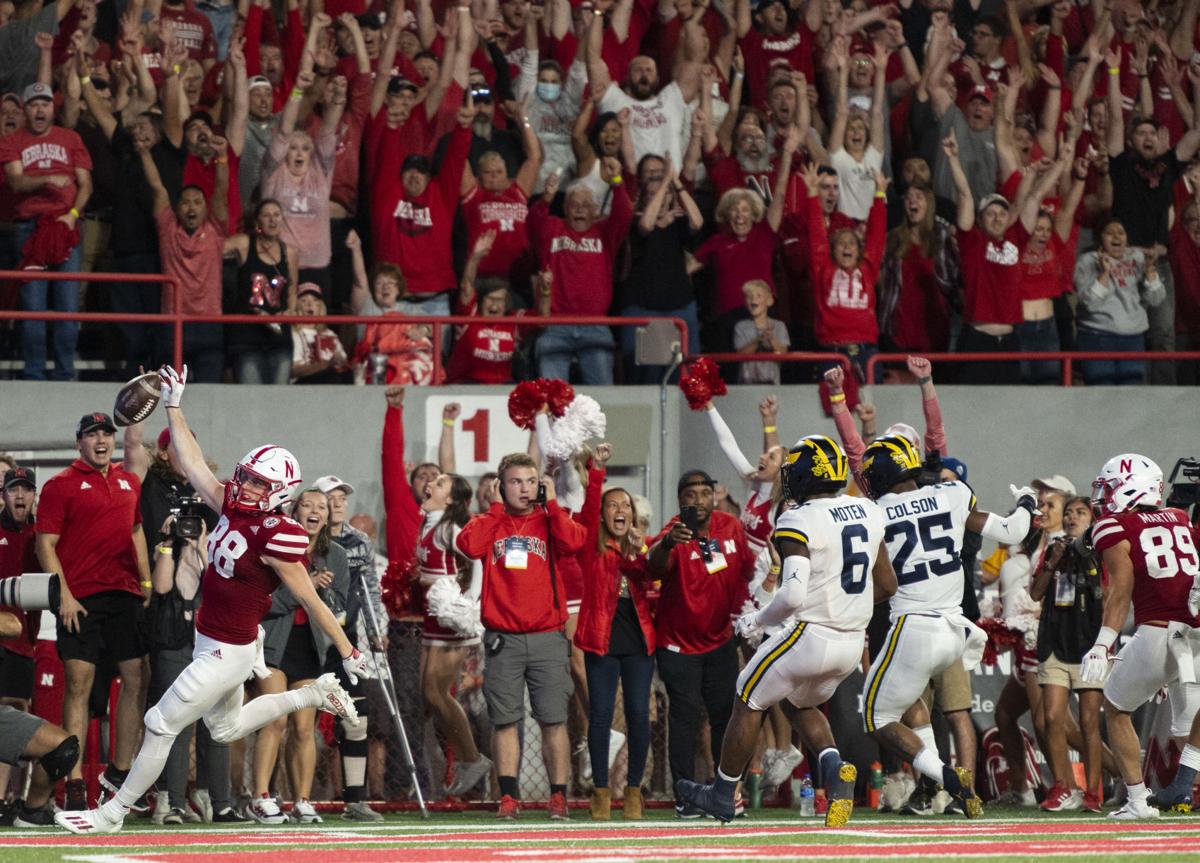 He’s not a fan anymore, though.

“They didn’t recruit me at all,” said Falck, noting the Gophers did recruit him as a baseball player before eventually backing off.

Falck, of Circle Pines, Minnesota, joined the South Dakota football program, making 14 starts with the Coyotes from 2016 to 2019. He caught 70 passes for 774 yards and a pair of touchdowns for USD, and thought that maybe would attract Minnesota’s attention.

It’s a subject that comes up between Falck and offensive tackle Bryce Benhart, a native of Lakeville, Minnesota.

“We’re locker buddies, so he’s right next to me in the locker room,” Falck said. “We always talk about how we don’t like Minnesota and we’ve got to beat them.”

“He’s fired up just to be starting,” Falck added. “And even more fired up to get a chance to beat our hometown.”

Falck has played in all seven games for Nebraska so far this season and has nine catches for 119 yards. He's come on over the past two games, logging six catches for 69 yards and a go-ahead touchdown against Michigan on Saturday.

Betts 'a little banged up': Offensive coordinator Matt Lubick said Tuesday that sophomore receiver Zavier Betts was dealing with a minor injury and that's part of the reason he played only in a limited role against Michigan.

Neither he nor junior Omar Manning were on the field late in the game for the Huskers, who have a deep rotation of receiving options.

"Betts got a little banged up. We think he’s going to be healthy this week," Lubick said. "He’s practiced, we think he’s going to be good this week. Omar, it was just kind of the rotation. Omar made a good catch early on, a big one down the field. As the game went on, it was kind of the guys that were hot. As far as deep threats, (Falck) I think has proven that he can make plays down the field. So has Oliver Martin. So as an offense, it gives us a lot of weapons.

Newsome steps up to the challenge, earns Blackshirt while starting every game this season

"It's really based on who’s the freshest, maybe who was in the previous drive and just kind of keeping guys fresh on who’s in the football game. We have confidence in all those guys."

The veteran NU quarterbacks coach praised the 6-foot-5 freshman's work ethic and his ability to adjust to the college game.

"On the plains of hesitation lie the white-bleached bones of the millions who thought to wait and in waiting they died," said Verduzco, loosely quoting, according to a Google search, George W. Cecil. "So I tell him, don’t wait. Get going. Don’t wait until next spring. Don’t wait until you’re a junior. Get going now. He appreciates that. I guess I’m hard on him a little bit, (pushing him) to get the mental part, at least in regards to the playbook, lined up with the strength of his arm and his athleticism.

"I think he’s taking that to heart."

No fun in losing: Nebraska coach Scott Frost said Saturday night that he thought the game against Michigan was the most fun he had ever had coaching a football game up until the very end, when his team lost in dramatic fashion.

Verduzco said Tuesday that he can't relate to the head coach's ability to enjoy (or not enjoy) what's happening during a game.

The toll of losing close games, though, is felt most acutely afterward and on Sunday.

"God, when you suffer a loss, sometimes it doesn’t matter who it’s against," Verduzco said. "You just work so hard, you know, and you put your heart and soul into every game and you come up short. It’s just hard."

'Unknown' a challenge vs. UM: Nebraska defensive coordinator Erik Chinander said there's going to be some surprises from Minnesota on Saturday offensively because, not only are the Gophers coming off a bye week, but their top two running backs are now out for the season due to injuries.

The next man up would appear to be Mar'Keise Irving, a true freshman from Chicago, who's listed at 5-10 and 190 pounds and has been the No. 2 to Tre Potts in recent weeks.

"You’ve got a little bit of the unknown, right? You’re probably going to see a young freshman running back in there," Chinander said. "You don’t know, he could be not as good as those (injured) guys. He could be better than those guys. He’s just the next guy up because of his youth. He could be the next great one. We’ve got to prepare like he’s the best running back we’ve seen back there.

"You never know, if they think that their running game is not going to be where it needs to be, they might start throwing the ball around. They might have some interesting wrinkles put in there."

The Cornhuskers inexplicably, incomprehensibly showed up without energy again Saturday – for the first time, actually, since August.

Nebraska will come off its bye and host a division foe in the afternoon.

MINNEAPOLIS — Connor Culp’s voice wavered and his responses came slowly as he reconciled another set of tribulations.

A 2019 game still sticks in Scott Frost's mind, particularly for what he perceived as "uninspired" play. Now, NU is "more of a grown-up team."

Scott Frost hit a few key talking points on his weekly television show, including the health of Deontai Williams and Adrian Martinez.

One note from Scott Frost centers on quarterback Adrian Martinez, who the coach says didn't run the option much Saturday because of his health.

Yes, Nebraska will have plenty of time to recover physically after playing eight straight weeks to open the season. But there’s also work to do.