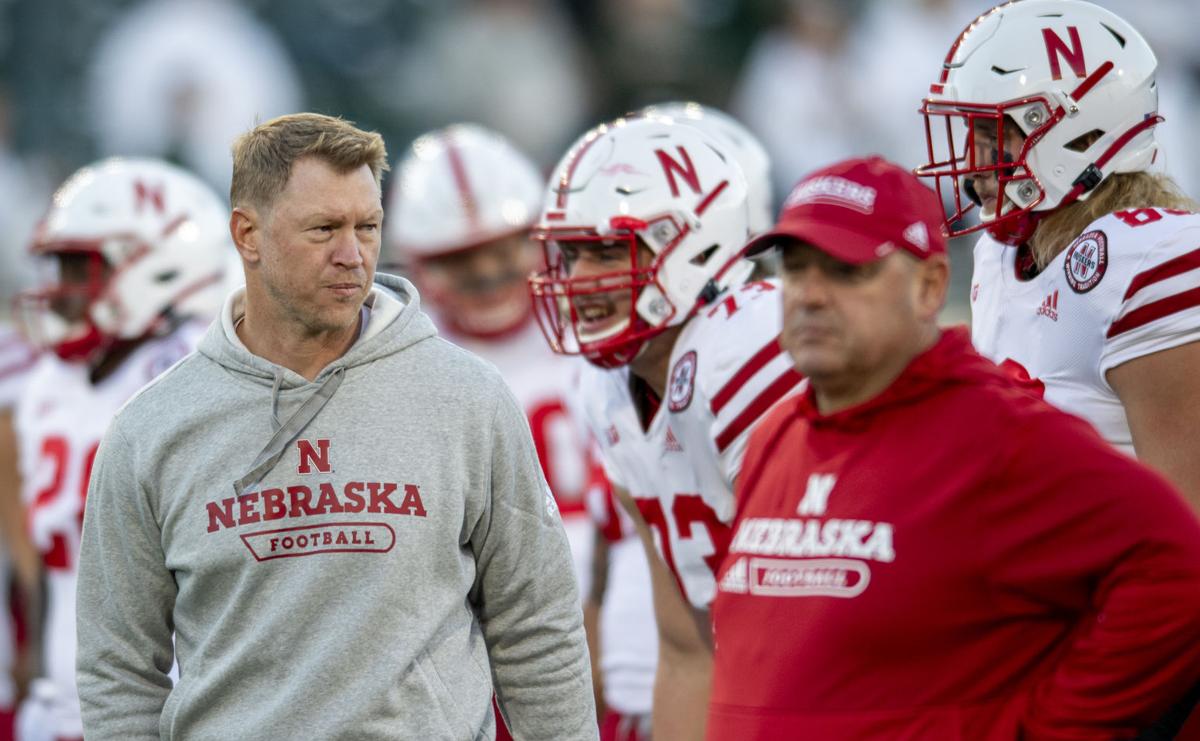 Nebraska head coach Scott Frost (left) walks the sideline against Michigan State in the first half on Saturday, Sept. 25 in East Lansing, Mich. 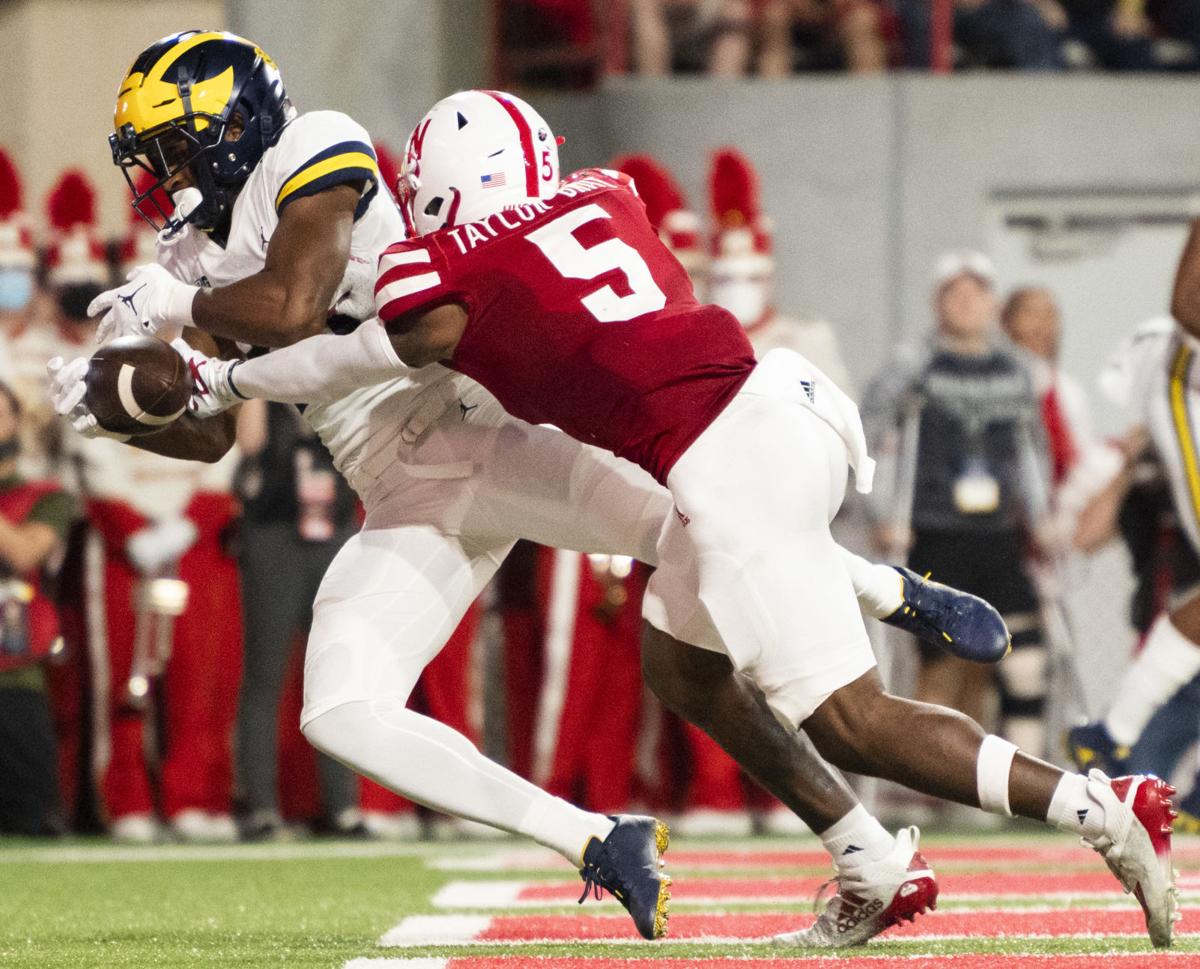 Nebraska's Cam Taylor-Britt (5) breaks up a pass to Michigan's Daylen Baldwin in the second quarter Saturday at Memorial Stadium.

Nebraska is not only playing for the eighth straight week to open up the season, but it’s also wrapping up a slightly road-heavy portion of the slate, too.

The Huskers’ game Saturday at Minnesota will be the fourth road game of the season and it precedes a stretch in which they play three of their final four games at Memorial Stadium.

When two off weeks get factored in, after this weekend, the Huskers only travel to Wisconsin over the final six weeks of the regular season.

“We’ve got to try to win one on the road,” coach Scott Frost said Thursday. “We’ve had a lot of away games, haven’t been here much. Look forward to being here more with the fans that we have and the environment right now.

“The guys are used to being on the road and we’ve played some good teams on the road, so this is another one and another big challenge.”

The Huskers are 0-3 on the road so far this season and have lost all three by eight points or less. Away from Memorial Stadium under Frost, NU is 6-15.

Frost, though, is confident in where his team stands at the end of a long stretch of games.

“They go to work the same way every week,” he said. “They know they’ve got basically three days left and they get a break, so everything we’ve got will be poured into this one.”

The fourth-year coach credited his team’s consistent approach to preparation to the peer leadership he says has been built in the program.

Slow the run: Minnesota rushed for 206 yards (4.8 per carry) last year against Nebraska despite traveling to Lincoln without 33 players due to a COVID-19 outbreak. In 2019, the Gophers rushed for 322 (6.6 per carry) and four touchdowns in a 34-7 rout in Minneapolis.

Suffice to say, the Huskers have to find a way to slow down UM’s powerful, zone-based rushing attack.

This year, Minnesota will be without star running back Mohamed Ibrahim (lost in the season opener to a knee injury) and backup Tre Potts.

The likely starter is freshman Mar’Keise Irving, though reserve Cam Wiley also had a productive day last year against Nebraska.

“They don’t do a whole lot of things, they’re just good at what they do,” Frost said of the Gophers, who will be coming off a bye week. “They’ve got some really big guys up front and they’ve had some great backs and some answers off their run. So our defense has got to be ready to do the best they can against the run and make sure to not get hit with anything tricky or new.”

“I think it was his best game,” Frost said. “Football comes to you. You don’t go make things happen, it doesn’t work that way. You’ve got to be where you’re supposed to be, doing what you’re supposed to do and if you’re a good player, the plays happen.

“I thought he did a better job of that last week.”

Taylor-Britt had 11 tackles and three breakups, and held up well in coverage.

His starting partner, sophomore Quinton Newsome, has also come on strong as the season has progressed.

Newsome has started all seven games, earned a Blackshirt and, according to Frost, shown opponents he’s up for the physical challenge in the Big Ten.

“Q’s been playing well. He is doing what he’s supposed to do,” Frost said. “People challenged him a lot early on and he’s been playing tough and coming up and hitting. He wasn’t given a Blackshirt, he earned it and I expect a lot more good games from.

“I think they were attacking him more in the run game early in the season than the pass game. He’s been doing a good job in both phases, but what we really wanted to see was him come up and strike, and he’s doing a good job of that.”

Stenger willed his Millard South team to a 35-21 win against talent-laden Bellevue West last month. Shortly after, his phone buzzed.

A sellout crowd was ready to party late into the night. An entire fan base was ready. In the end, though, there was more heartache.

This notebook opens with a detailed chat with Matt Lubick on the offensive gameday operations, which he says have improved this season.

Sound waves: What others are saying about Saturday's Husker game

A look at some talking points after the Huskers' game against Michigan on Saturday.

Chris Basnett weighs in with his report card from the Huskers' game against Michigan.

"It's just tough," Scott Frost said of the Elkhorn South graduate's injury. "Teddy's just been improving by leaps and bounds since he got here."

A 2019 game still sticks in Scott Frost's mind, particularly for what he perceived as "uninspired" play. Now, NU is "more of a grown-up team."

The conundrum of Adrian Martinez

Nebraska wouldn't be where it is as a program without Adrian Martinez. He's also hurt NU by trying too hard at times.

Nebraska head coach Scott Frost (left) walks the sideline against Michigan State in the first half on Saturday, Sept. 25 in East Lansing, Mich.

Nebraska's Cam Taylor-Britt (5) breaks up a pass to Michigan's Daylen Baldwin in the second quarter Saturday at Memorial Stadium.