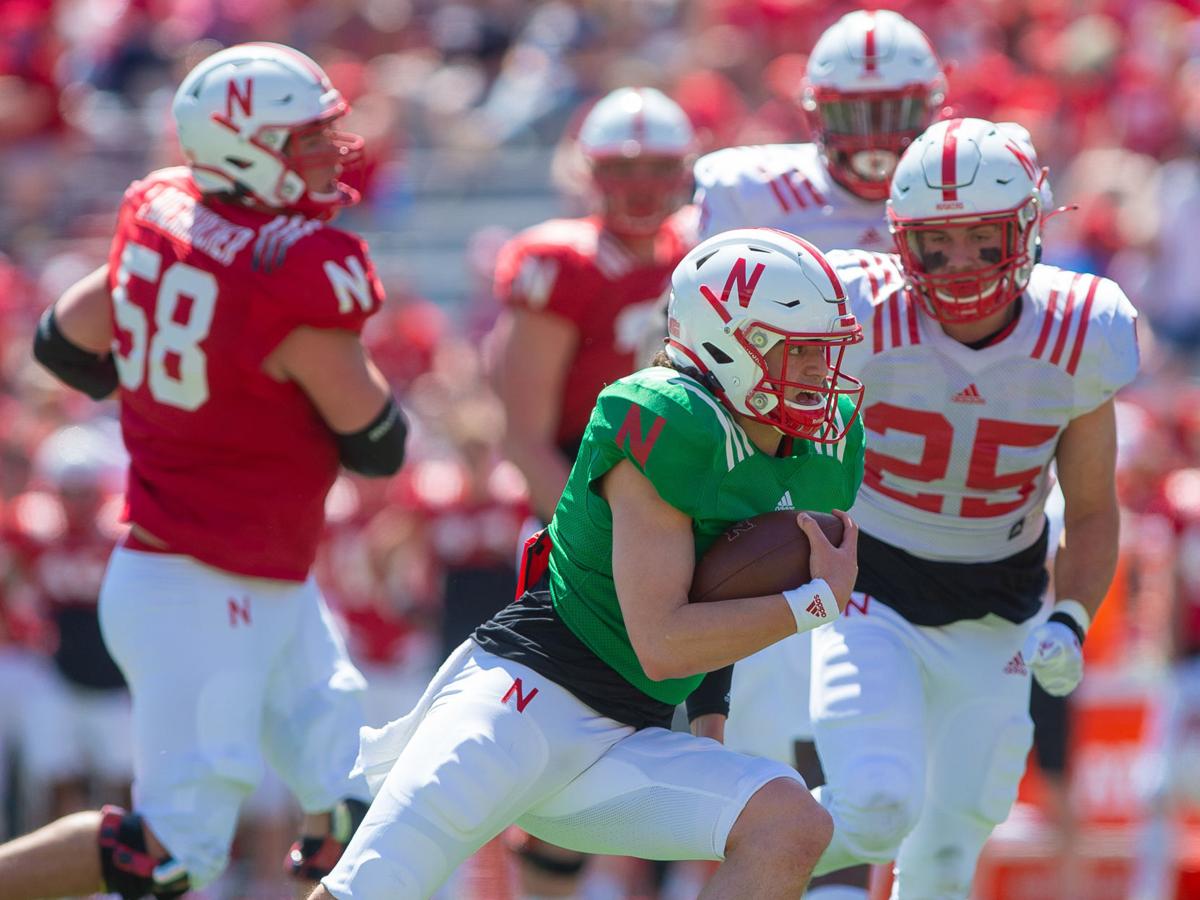 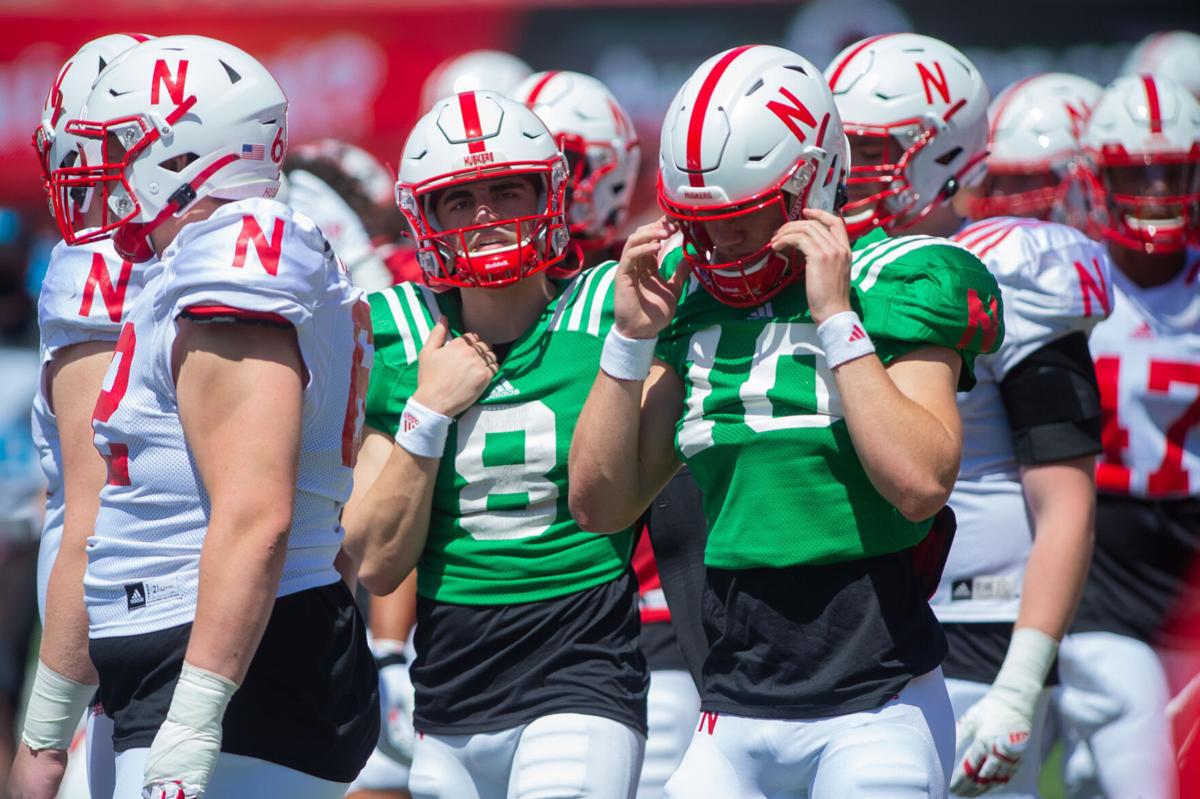 Nebraska quarterbacks Logan Smothers (center left) and Heinrich Haarberg (center right) walk along the sideline during the Red-White Spring Game on May 1 at Memorial Stadium.

Heinrich Haarberg and Logan Smothers both put late scoring drives together on Saturday.

The next challenge is to keep marching down the field from a developmental sense, too.

Nebraska head coach Scott Frost was glad to get extended snaps for both during the Red-White Spring Game, even if the tale of the tape for each this spring was more about the first 14 practices than the final scrimmage.

Steven M. Sipple: The football was good, and seeing all the fans made for a colossal "W"

“I’ll have to watch the tape and see how they did today, but I know how they’ve been doing all spring,” Frost said. “I’m pleased with where those guys are. They both have some growth, certainly, left in front of them, but they both had really good springs.”

Afterward, Frost reiterated his sentiment for the second time this week that he doesn’t believe NU has to add a quarterback to its room this summer.

“Right now our plan isn’t to take a quarterback, no,” Frost said.

That’s a vote of confidence for Smothers and Haarberg, neither of whom have taken a snap in a college game.

Smothers has been on campus since January 2020, but was subjected to the same jumbled offseason as everybody else during the pandemic. That slowed what has a been long period retooling of his throwing motion with quarterbacks coach Mario Verduzco.

“It’s a challenge cleaning up your stroke. That’s all I’ve known my whole life throwing a football,” Smothers said. “He’s been working with that and getting it right. It’s been a process, but it’s going good. …

At times, Frost said earlier in the spring, the 6-foot-2, 190-pounder looks like he’s thinking about the mechanical changes. When Smothers just plays, then the natural instincts and processing that Frost and Verduzco rave about start to take over.

The Scene: It was football Saturday in Lincoln again, and oh, what a joy it was for fans

“When I just go out there and play, I play better,” Smothers said. “When you’re thinking about things too much, you tend to mess up.”

The key for him is for the work he’s been doing with Verduzco to take over thoroughly enough that when he settles into a rhythm and just plays, he falls back into the mechanics he’s learned instead of the ones he grew up with.

Frost said Wednesday he has “full confidence” that will happen by this fall.

The Alabama native had one more adjustment to make on the fly Saturday. NU planned to split the repetitions evenly between him and Haarberg, but Smothers’ White Team went three-and-out on the only first-quarter possession, so Haarberg ended up guiding five in a row in the second quarter.

“You’ve got to stay ready.”

Haarberg, the 6-5, 190-pound Kearney Catholic graduate, is not afraid to push the ball down the field, and Nebraska’s coaches don’t feel like they have to tinker much with his mechanics.

Instead, it’s really just about learning fast for the rookie who arrived on campus in January.

“When I got here I was swimming in it,” Haarberg said. “I was going up to (Verduzco’s) office for about three hours every day just trying to learn and figure out how to put myself in this offense. And now I came out today confident that no matter what play they called, I was going to be able to run it, and not do anything outside of myself and just run the offense.”

Smothers and Haarberg are just at the very outset of their collegiate careers. They each have five years of eligibility remaining, after all. However, Nebraska also doesn’t have anybody with experience behind junior Adrian Martinez and Martinez has missed time in each of his first three seasons at Nebraska.

Eventually, Nebraska will have to decide on a pecking order between the two, but Frost said it was far too early for that Saturday. Right now, the challenge ahead for Smothers and Haarberg will be just like Smothers said with the change-up to the rotation Saturday: Stay ready. At this point, though, perhaps it's more like "Get ready."

So far, so good, according to Frost.

“We were really vanilla today, so it was simple stuff, but Haarberg has a huge arm and he’s a really good athlete and he’s a big kid and he’s smart, so it’s just a matter of catching him up with X's and O's and knowing what to do and being efficient,” Frost said. “That’s where Logan excels. Logan is really smart, knows the offense, processes things well.

“Those two are going to continue to improve and I have a lot of confidence in them.”

Photos: All of the sights from the return of the Red-White Spring Game at Memorial Stadium

Will the Houston Texans have the worst record in the NFL?

Will the Houston Texans have the worst record in the NFL?

NFL rookie to make full recovery after being shot

NFL rookie to make full recovery after being shot

Nebraska defensive coordinator Erik Chinander said it’s been great to be able to have players come in for workouts in Lincoln.

The guys give highlights after hitting the road for Big Red Blitz stops earlier this week, break down the latest recruiting happenings and talk hoops.

Tokyo shapes up to be No-Fun Olympics with many rules, tests

Nebraska quarterbacks Logan Smothers (center left) and Heinrich Haarberg (center right) walk along the sideline during the Red-White Spring Game on May 1 at Memorial Stadium.