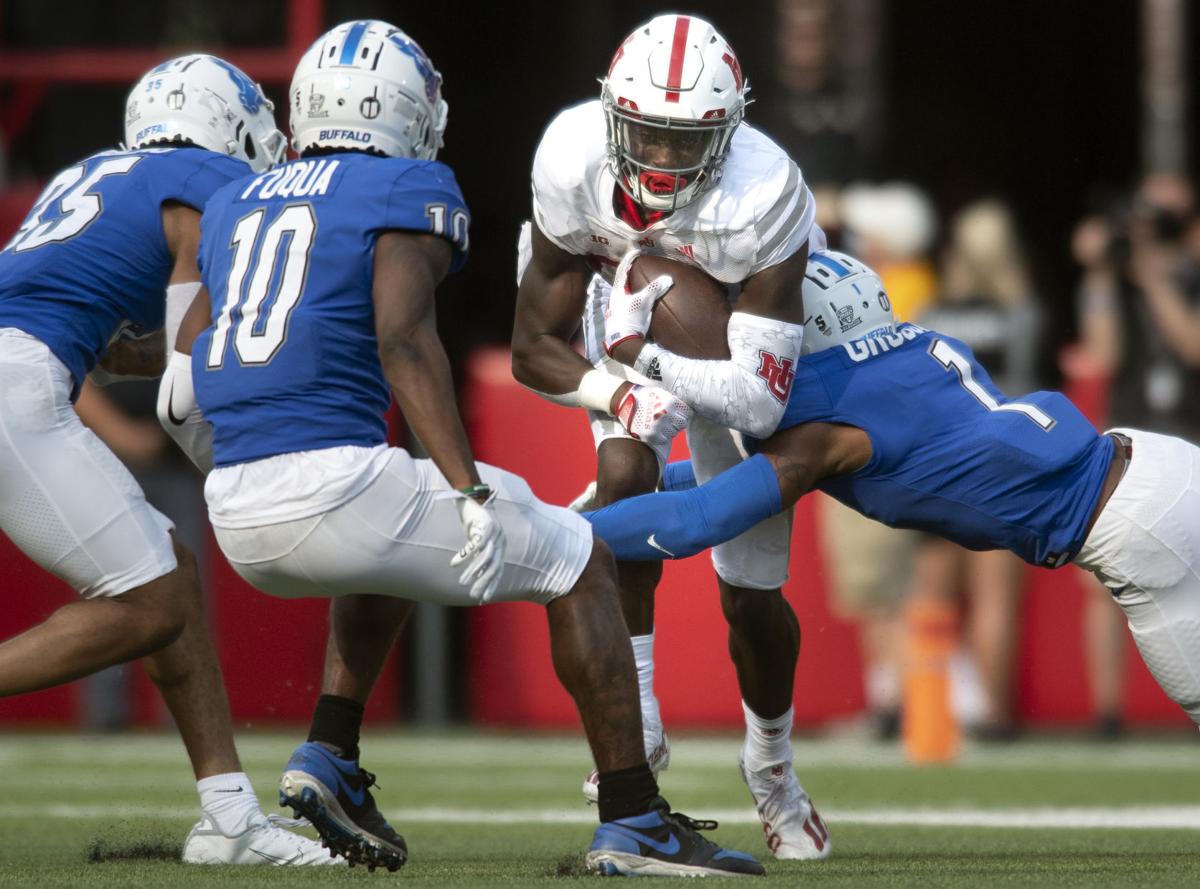 Nebraska running back Gabe Ervin Jr. (center) carries the ball as he is tackled by Buffalo cornerback Logic Hudgens (from left), safety Marcus Fuqua and safety Cory Gross Jr. in the second half Saturday at Memorial Stadium. 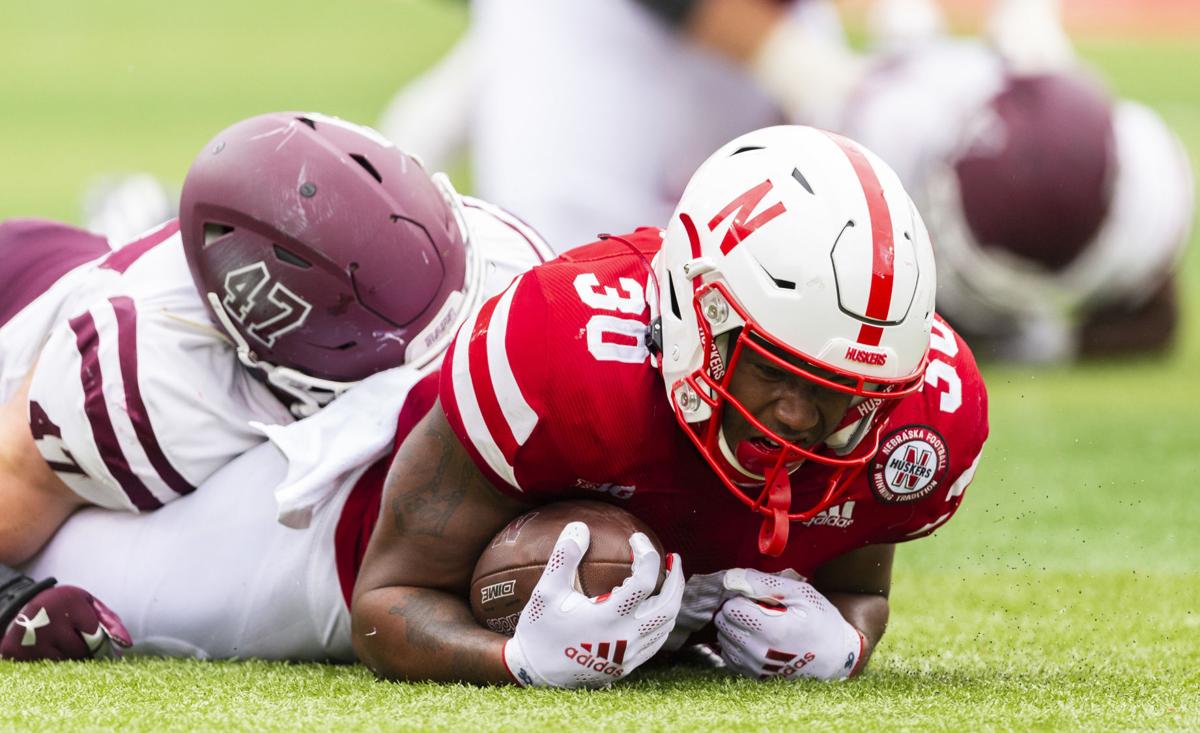 Nebraska's Markese Stepp (30) lies on the ground after being tackled by Fordham's Ryan Greenhagen on Saturday at Memorial Stadium.

Nebraska head coach Scott Frost said immediately following his team’s 28-3 against Buffalo that his team needs to get more proficient, quickly, in its bread-and-butter run game.

He said it during his halftime interview, too.

And he reiterated it Monday as the Huskers get ready to play No. 3 Oklahoma on Saturday in Norman.

“We’ve just got to be more consistent,” Frost said Monday. “It’s one guy here and there. It’s a guy missing a hole on another play. They had the box packed, so that made it a little tough, but we’ve still got to pop a few more of those and it’s got to be a collective effort — tight ends, running backs, offensive line, receivers. …

It's an interesting qualm in a way because Nebraska is No. 22 in the country in rushing yards per game at 238.3. That number is a bit misleading, though, because junior quarterback Adrian Martinez has racked up 248 yards alone, by the Journal Star's count, on designed passes that he's turned into rushing yards by going into scramble mode.

Against the Bulls, NU’s running backs carried 31 times for 106 yards and the Huskers averaged 3.9 yards per carry on 36 non-scrambles.

It’s not all on the offensive line, as Frost said, but he is looking for that group to find another gear.

“We’ve got to grow as a unit and that unit might be five guys, it might be seven guys, it might be eight guys,” Frost said. “We’re going to put the best guys out there. If we need to rotate, we’ll rotate. More than anything I think they need to stop thinking as much as they’re thinking and just come off the rock and move people.”

Nebraska changed starters at left tackle from Brant Banks to Turner Corcoran after the Illinois game, but Banks was starting in the first place because Corcoran was working his way back from a preseason camp injury. NU has rolled with Corcoran and the four other starters so far this season: Left guard Ethan Piper, center Cam Jurgens, right guard Matt Sichterman and right tackle Bryce Benhart.

They have also got a few other players in, including right guard Nouredin Nouili for a couple of plays Saturday when Sichterman cramped up, Banks in a bit at left guard in the second half (and then once the full starting unit was out late in the game — and fast-rising freshman Teddy Prochazka down the stretch for the second straight week.

Banks and Nouili are both versatile players — Banks spent spring competing for the right guard job and Nouili was the No. 2 left tackle at times — and at some point, junior Broc Bando will return from a non-COVID illness, but Prochazka has quickly become perhaps the most intriguing player in the conversation.

“Teddy’s in the conversation,” Frost said. “He’s improving every day and he’s got big upside, so we’ll see how quickly we feel like he’s ready to go in and contribute. … I couldn’t believe how fast he got big when he got here. He’s really athletic for his size. He’s learning. Hopefully it comes around sooner rather than later.”

Watch now: Turner Corcoran not satisfied with his play this season

He’s a tackle all the way, too, at 6-foot-9 and 310 pounds. He said he thinks he’ll be pushing 325 by the beginning of the 2022 season. Will he be a redshirt freshman then? Or will he play in more than four games this year? Prochazka isn’t sure but said he’s open to going past the four games. “I’m just kind of taking it day by day, week by week,” Prochazka said. “This week, they’re telling me they might use me in certain spots. It’s really a day-of type of thing if I know I’m going to be playing or not.”

This has all happened pretty quickly for the mid-year enrollee, who arrived on campus in January and started feeling more really comfortable about midway through preseason camp.”

“I never really expected to get playing time, but a couple weeks ago, the coaches told me, ‘You have an opportunity to play. So don’t hold back.’ And I just kind of took that and ran with it and it brought me to here,’” Prochazka said.

He also counts Corcoran and Benhart as mentors, even though both are still considered freshmen.

“Pretty young tackles that we have here, but I just kind of follow their lead and fill their shoes,” Prochazka said.

What happens if Prochazka proves to be one of Nebraska’s five best even given his young age? Time will tell, but the Elkhorn South grad is clearly coming on fast at a time when the Huskers are looking for production.

Nebraska will be better off up front, too, whenever junior tight end Travis Vokolek (left ankle/foot) returns to action. Perhaps NU’s best run blocker, the 6-foot-6, 260-pounder worked out Saturday on the field during early warmups, but did not dress for the game. He has yet to play this season.

“We get spoiled with Austin (Allen) and Travis,” Frost said. “I thought those guys that played (Saturday) battled,” Frost said. “Chris (Hickman) has been playing a little bit hurt, too. Then we’re playing (walk-ons Nate) Boerkircher and (Chancellor) Brewington, who just moved positions. I can’t say enough the job that those guys did, but we’re looking forward to having our guys back, too.”

Three Keys to the Game: Nebraska at Michigan State

Are the Green Bay Packers pretenders?

Are the Green Bay Packers pretenders?

Could Arkansas keep their impressive start going against Texas A&M (-4.5)?

Could Arkansas keep their impressive start going against Texas A&M (-4.5)?

'It's way more than me': NU wide receiver Omar Manning opens up about mental health, coming into his own at NU

Omar Manning wants to share his story. The challenges were always there, but he says seeking help when he arrived at NU was "major."

Faced with climbing the depth chart or getting passed up, Husker RB Rahmir Johnson has ascended

Instead of entering the transfer portal, the third-year running back took his coach's words as a challenge. Now, he's the latest to start.

Gabe Ervin will start rehabbing his injury as soon as Wednesday: "I thought he had a really good start to his freshman year. He’s a dog."

No Nebraska football media availability Wednesday, but we've got a full notebook, beginning with Teddy Prochazka, the tight end.

Few people expected Michigan State to start 3-0. We look at how the Spartans have succeeded, as well as finding spots the Huskers could attack.

Some four hours before kickoff for Nebraska-Michigan State, a smiling former Husker rush end entered Harper's Restaurant and Brewpub near the MSU campus.

Husker Hot Topic: Is this the biggest game of Scott Frost's tenure at Nebraska?

The Life in the Red Podcast crew sounded off on this question. Two of them agree it is. The other? Well, he's tired of talking about it.

After missing one series, Nebraska quarterback Adrian Martinez returned to Saturday's game at Michigan State after a hard hit to his facemask area.

The placekickers on the trip are senior Connor Culp and freshman Brendan Franke. That's the same setup Nebraska had at Illinois, too.

Nebraska running back Gabe Ervin Jr. (center) carries the ball as he is tackled by Buffalo cornerback Logic Hudgens (from left), safety Marcus Fuqua and safety Cory Gross Jr. in the second half Saturday at Memorial Stadium.

Nebraska's Markese Stepp (30) lies on the ground after being tackled by Fordham's Ryan Greenhagen on Saturday at Memorial Stadium.