Ben Emond was a darn good baseball player in his college days. An All-Big 12 performer, Emond was an outfielder on some fine Texas Longhorns teams in the late 1990s and early 2000s.

But even Ben Emond was no match for the outfield fence at Buck Beltzer Stadium.

There was no warning track at Buck Beltzer. There couldn't be, because the outfield was also the practice field for the Nebraska football team and Tom Osborne's boys couldn't be working on the option with a strip of dirt out there.

Emond forgot this tidbit when Texas played NU in Lincoln back in 1999. He went racing after a fly ball. He met the Buck Beltzer fence face-first, going full speed.

You won't be surprised to learn Nebraska swept the Longhorns that weekend.

The glory days of Nebraska baseball featured deep postseason runs, memorable players, great coaches and a baseball stadium where the word "stadium" was used in the loosest possible way.

The beauty was in the imperfections. And there were plenty of those.

This June marks 20 years since Nebraska played its final games in Buck Beltzer. The end of the longtime home of Husker baseball is iconic — a super regional win over Rice, with current NU head coach Will Bolt squeezing the final out, to send NU to its first College World Series. The team taking one last lap around the facility to high-five a euphoric crowd.

That final game was played June 2, 2001. This weekend, super regionals from Arizona to South Carolina are being played in modern baseball palaces with amenities the Huskers of those glory days couldn't even imagine.

Even in its final days, at the time the best moments in the history of a mostly ignored program, Nebraska had to bring in porta-potties to set up next to the dugouts and to handle the influx of fans.

It was gritty, not pretty. But NU turned the place into a massive home-field advantage.

"We had had some momentum as a program building up to that point," said Justin Seely, a junior outfielder on the 2001 team and recent assistant coach at Texas A&M. "But now we’re hosting at home in this rickety ballpark that kind of fits the culture of Nebraska — hard-working, blue-collar, straight to the point-type people. And we’re this really good team hosting in a not very good facility.

"And I think it was a point of pride for us, and it did help build momentum for us, when it came especially in the postseason."

Nebraska could have played those final games at the sparkling new field not far away — Haymarket Park was finished that spring, and was ready to host a super regional if called upon. It was, at the time, maybe the best college baseball facility in the country.

But why get away from what works?

"Our team was built to play, in some respects, in that facility," Seely said. "We would have been good anywhere. But I think the facility itself lent to the composition of our team."

Situated just to the north of Ed Weir track facility in the shadow of Memorial Stadium on what is now the Hawks Championship center, Buck Beltzer was an afterthought for much of its existence.

A donation from Buck Beltzer's family allowed the facility to be renamed in 1979, and allowed for such fancy accoutrements as aluminum bleachers, a press box and a concession stand.

There was never, however, a permanent fence.

"I think of not having an outfield fence in fall ball, and being charged with putting out the cones for the right field wall," said Bolt, a junior infielder and captain on the 2001 team. "That was one of my pre-practice duties."

At least once, Bolt and Seely said, in the 2000 season, there was a temporary orange snow fence down the right field line to contain the white stuff from an early March snowstorm that had accumulated on the field.

The snow was easy to move, of course, because Buck Beltzer had an artificial turf infield to go with its grass outfield.

"My knees still feel it today, from having played on that field for three years," Bolt said.

Bolt was involved in more memorable plays than just the final out. Once, he hit a routine line drive up the middle that hit a pockmark in the outfield, bounced over the opposing center fielder's head, and rolled to the wall as Bolt ended up with an inside-the-park home run.

The outfield was often littered with old mouthpieces and the occasional chin strap left behind from football practice. The divots and ridges led to injuries and funny hops and opponents who didn't want any part of trying to field balls normally.

"So we were just taught, when we hit a ground ball through the infield, to just keep running at times," Bolt said. "Because the outfielders didn’t want to charge it and come pick it up."

There was also the time a Journal Star photographer by the name of Ken Blackbird was perched on top of the first base dugout because, as you can probably imagine, there were no camera wells for photographers to work.

Baylor slugger Kelly Shoppach dug in back in 2001, fouled off a pitch, and squared Blackbird up, knocking him off the back of the dugout.

"And we're talking about — a dugout can't be small. You have to have it there for big people," Seely said. "It's probably a 10-foot wall, and I will tell you, outside of the games part, that was one of the more memorable things (I saw)."

Blackbird was fine, needing seven stitches to repair a cut about his right eye. But he also became a part of Buck Beltzer's lore.

Nebraska swept that series too, by the way.

"I think our opponents wanted no part of playing there," Bolt said. "They weren't going to get up to play in that ballpark, and it was kind of a glorified high school field, honestly.

"You throw in the cold weather, with the Southern teams coming up from the Big 12, and I think we had a huge advantage."

Nebraska's players, though, with the wins piling up, had a love affair with their home that lives on today.

"I gotta tell you, I always looked at it like I was happy with what we had. I was never discouraged by what we didn't have," said Seely, a Texas native. "And we had the keys to the place. We could go out there at night and go hit; flip the lights on from time to time by ourselves amongst players.

"It was just our home. And we were proud of it. We were obviously looking forward to playing at Haymarket. … But we were very proud to play there."

Buck Beltzer got one last sprucing up for the postseason before shutting down for good. NU brought in a sod cutter and cut a warning track. The outfield was seeded over and smoothed out. Extra seating was brought in to increase capacity from 1,500 to more than 5,000 for regionals and super regionals.

"You kind of look around before those games at the super regional knowing it's going to be the last games in that stadium," Bolt said. "And thinking, 'Man, this looks a lot different than it did.'"

Former NU pitching coach Rob Childress was there alongside Dave Van Horn as the two coaches turned the Huskers from afterthought to national power. There from the beginning watching players shovel snow off the infield and set up cones in the outfield and embrace their imperfect home.

"There were some great moments playing on that field," Childress said. "The thing that stands out the most is closing it down the way we did — beating Rice in the super regional, all the work that (NU associate athletic director for events) Butch Hug and his staff did to allow us to host in the postseason … and the fans, the Sea of Red that surrounded that place as we beat Rice to punch our ticket to Omaha."

The rickety old yard went out beautifully. And beauty, of course, is in the eye of the beholder.

The centerpiece: The stories that have highlighted the Journal Star's sports sections in July

The Midland, Texas, admits he was surprised he wasn't selected in the draft. But he explains why he's not adopting a 'chip on shoulder' attitude.

In town to light the torch at the Cornhusker State Games, Alex Gordon gives a glimpse into into retired life. Yes, he misses baseball "a little bit."

A team session with a team psychologist offered Povich a chance to reflect on a unique career path with heavy "bet on yourself" undertones.

Moments before the MLB Draft resumed with Round 11, the Journal Star boys athlete of the year revealed he is going to school next year.

Childress officially back at Haymarket Park, where Bolt hopes to enhance NU's operation

Childress shared what his "sole focus" is in his return to the Huskers, and Will Bolt ponders the possibility of improving the program's amenities.

On eve of Name, Image and Likeness, Runza says it will offer Nebraska athletes endorsement deals

The Nebraska food chain is offering deals to the first 100 current athletes who opt in and promote the restaurant's rewards app on social media.

EXPLAINER: The Olympic soccer team that doesn't quite exist 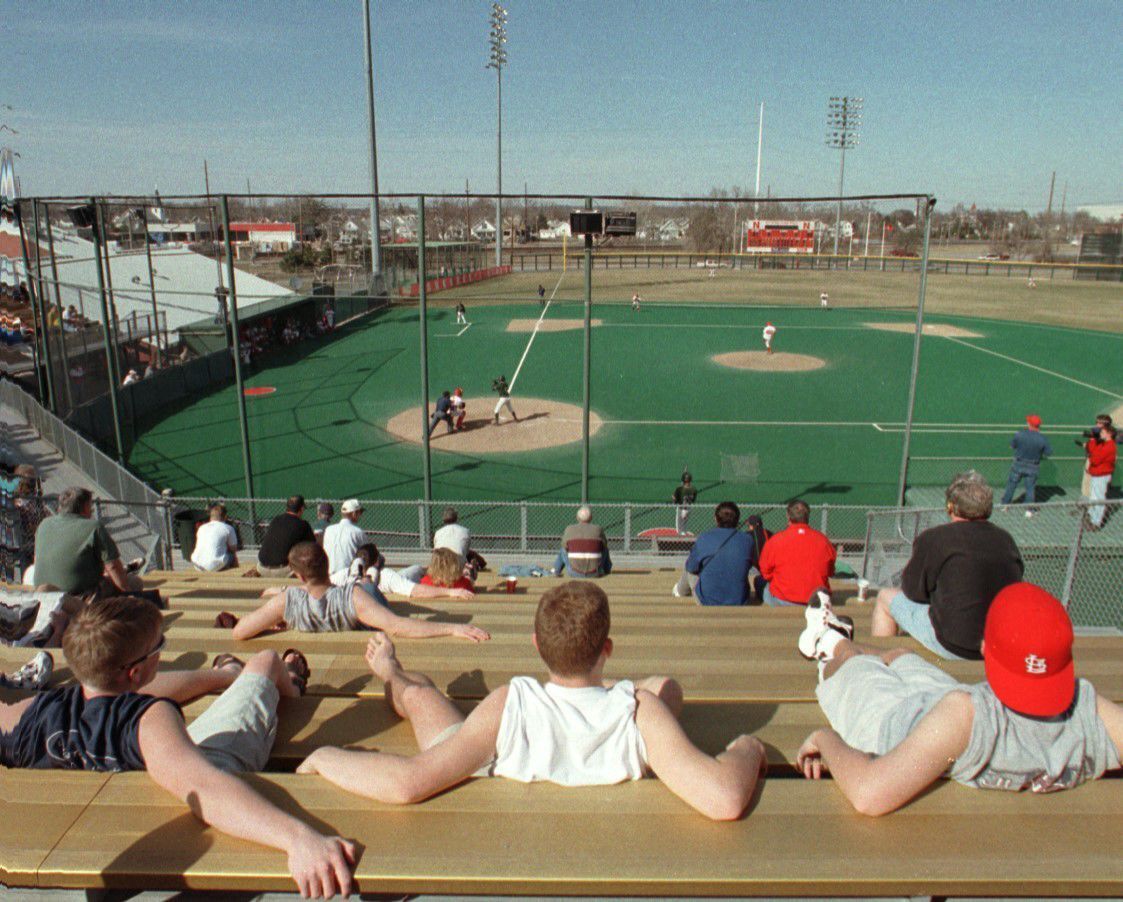 Nebraska fans soak in the sun and some baseball at Buck Beltzer in 1999. Nebraska say goodbye to the old, rickety ballpark 20 years ago this month. 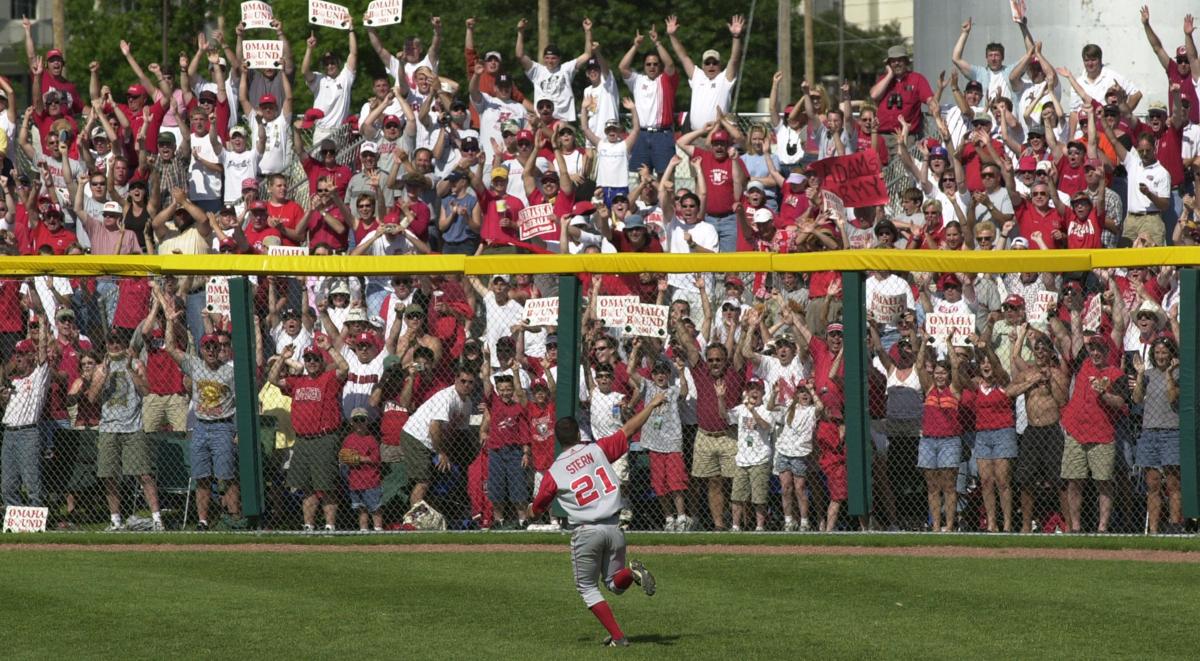 Nebraska's Adam Stern salutes the right-field fans after the Huskers defeated Rice 9-6 at Buck Beltzer to advance to the 2001 College World Series.

Buck Beltzer is filled to the brim for a NCAA Tournament game near the end of its time on the Nebraska campus. 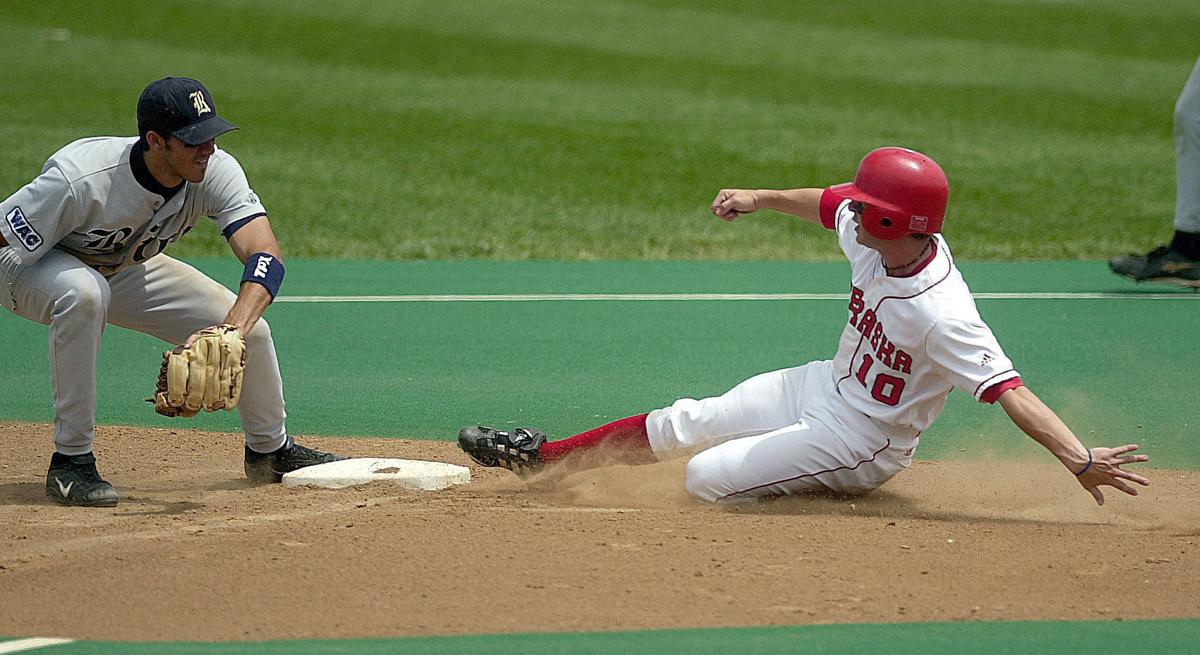 Nebraska's Justin Seely (10) beats Rice's Eric Arnold's tag at second base for a steal in a 2001 super-regional game at Buck Beltzer. The ballpark was unique in that it had a turf infield and a grass outfield.