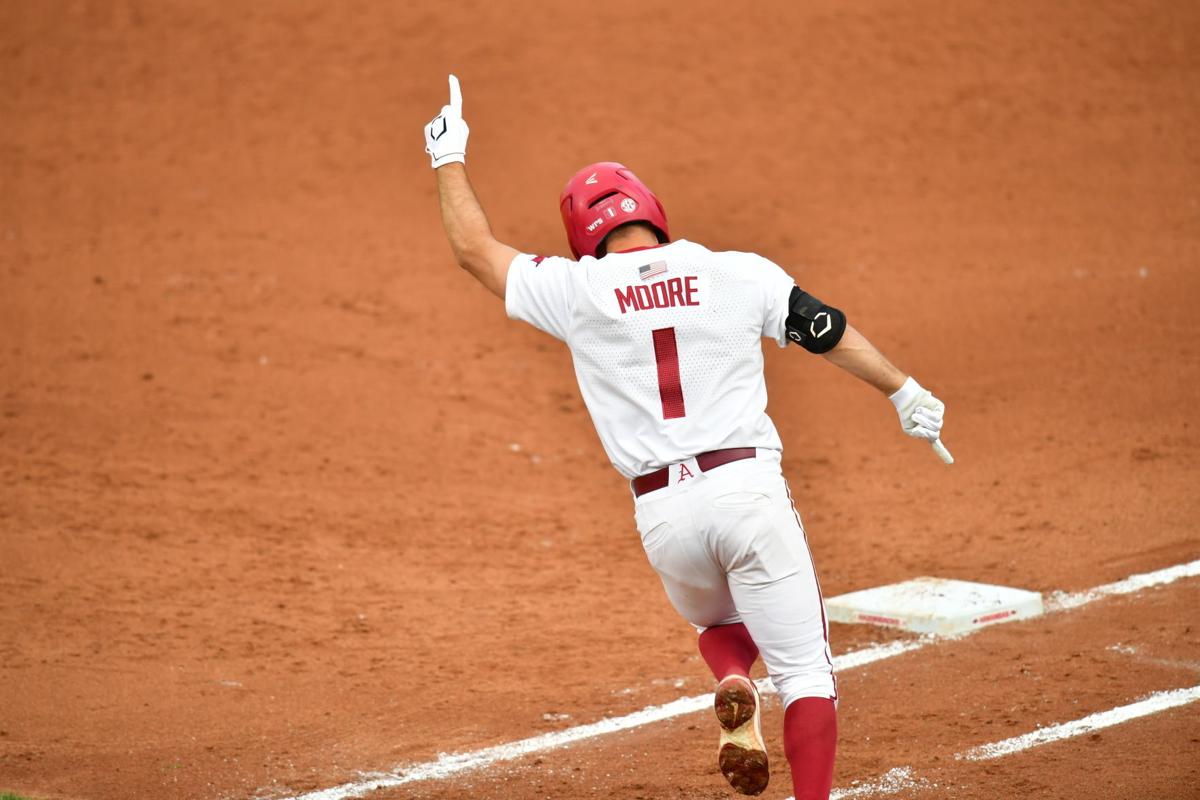 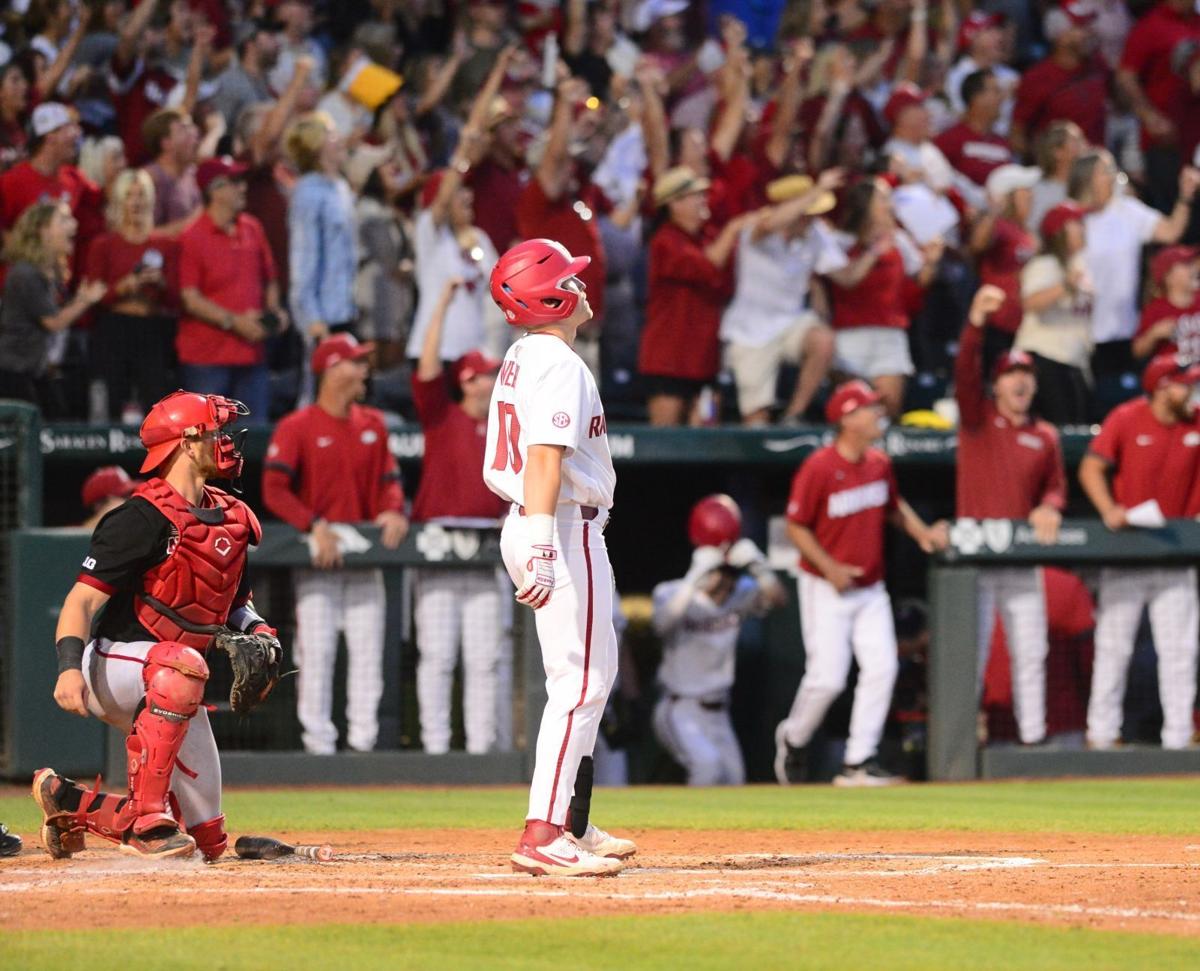 Arkansas' Charlie Welch watches his three-run homer take flight in the eighth inning against Nebraska on Monday in Fayetteville, Ark. 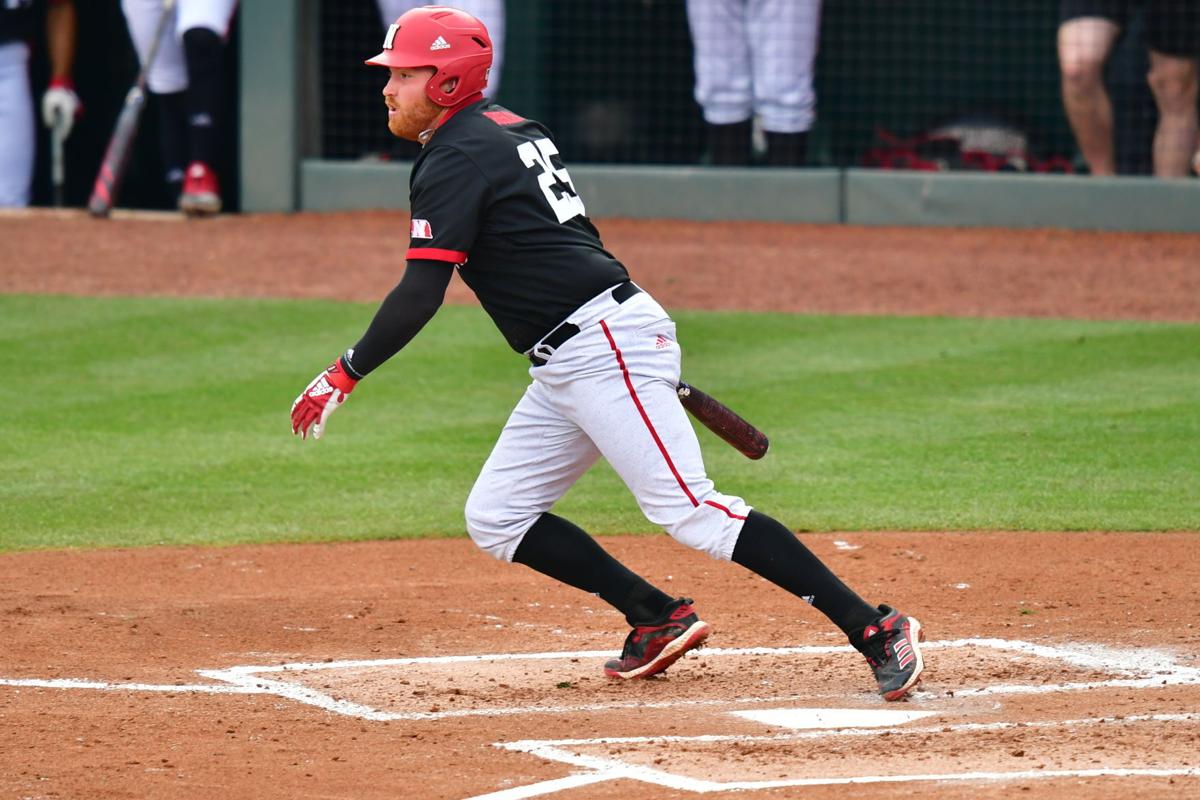 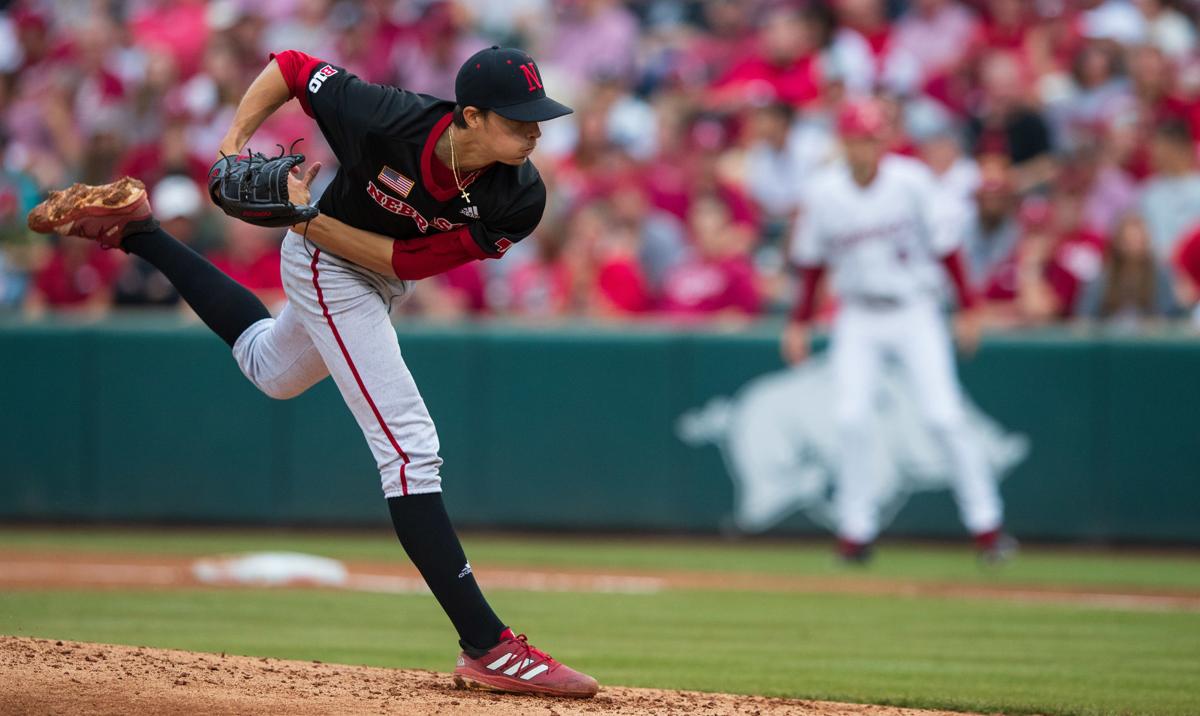 Nebraska's Cade Povich throws a pitch against Arkansas during an NCAA regional final Monday at Baum Stadium in Fayetteville, Ark.

FAYETTEVILLE, Ark. — Arkansas had Superman on the mound, and a powder keg of bats in its dugout waiting to blow.

And while Kevin Kopps wore his cape, the Razorbacks exploded to end Nebraska's year.

Arkansas' all-world reliever threw 90 pitches in his third relief appearance of the weekend — and 185 overall in the regional — and pinch-hitter Charlie Welch smashed a titanic three-run homer with two outs in the bottom of the eighth inning as the No. 1-ranked Hogs downed Nebraska 6-2 in the Fayetteville Regional final.

Steven M. Sipple: Sure, the loss stings, but Huskers' late-season uprising something to behold

'You got to have that fight': Huskers force winner-take-all regional final with gritty win over No. 1 Arkansas

The man who turned Nebraska baseball into a winner more than 20 years ago before heading south has seen more big moments than most. His words spoke to how hard Nebraska pushed the Razorbacks on their home field.

"When I saw them pop up (during the NCAA selection show) I thought, 'Why are they sending the Big Ten champion here?'" Van Horn said. "They came in here and they were a little bit comfortable. More comfortable than I wanted them to be. I knew it was going to be hard to get by them."

Nebraska, which forced Monday's winner-take-all game with a 5-3 upset Sunday night, took a 2-0 lead into the fifth inning, and the Baum Stadium crowd, rowdy all weekend, was abuzz with the nervous energy that often sinks the favorite when the pressure is on.

"It was crazy. It’s the only place we’ve played away this year that had more than 200, 300 people. So we kind of embraced it," said NU left-hander Cade Povich. "With all the stuff that was going on, we just kind of took it under, and we decided we were going to be the team that was going to make the upset happen.

Solo home runs in the fifth and sixth innings, Arkansas' 100th and 101st of the season, tied the game. The first came from the bat of Casey Opitz, the younger brother of former Husker Jake Opitz. That fifth-inning shot jolted Arkansas' dugout, Van Horn said, and set the stage for the Razorbacks' rally.

Year 2 for Will Bolt ended with a 34-14 record, a Big Ten championship and a team meeting in shallow right field after NU came perhaps within inches of pushing the No. 1 overall national seed to the bottom of the ninth or beyond.

With two outs in the eighth inning, the Huskers couldn't corral a foul tip from Christian Franklin that would have been strike three and gotten the game to the ninth.

Instead, Franklin fouled off four two-strike pitches and worked a walk. Another walk followed. And a third walk after that as NU relievers threw 11 consecutive pitches that were called balls.

The 11th of those was wild, scoring a run and giving Arkansas (49-11) its first lead of the game.

The next offering landed in a delirious Hog Pen fan area in left field as Welch, now 8-for-12 with six RBIs as a pinch hitter this season, put Arkansas ahead 6-2 with a three-run shot.

"Unfortunately a couple innings have gotten away from us this weekend, and that was the difference in two losses — the walks, the wild pitches, and obviously the big swing there at the end," Bolt said.

That made the ninth inning a little more than a formality for Kopps, who retired 13 of the last 14 batters he faced. Only a hit batter in the ninth ruined his perfect final four innings.

Like Sunday night, it didn't take long for Nebraska to quiet the crowd.

Luke Roskam destroyed a Jaxon Wiggins pitch to lead off the second inning, flipping his bat and taking a moment to admire his titanic shot over the NU bullpen to make it 1-0.

The Huskers tacked on another in the third as Mojo Hagge and Logan Foster worked walks to start the inning and knock Wiggins out of the game.

Those walks brought Van Horn out of the Arkansas dugout and calling for Kopps. After a Joe Acker sacrifice bunt moved the runners, a Jaxon Hallmark groundout brought in Hagge to put NU up 2-0.

One of the best power lineups in the nation, which had managed one home run while collecting five and four hits against Nebraska in the teams' previous two meetings, cut the lead in half on Casey Opitz's solo shot, and tied it one inning later with Robert Moore's solo homer.

Despite the loss, Nebraska appears to be on the verge of a step forward as a program.

"It shows we're here," Povich said. "And we're going to be here for a while." 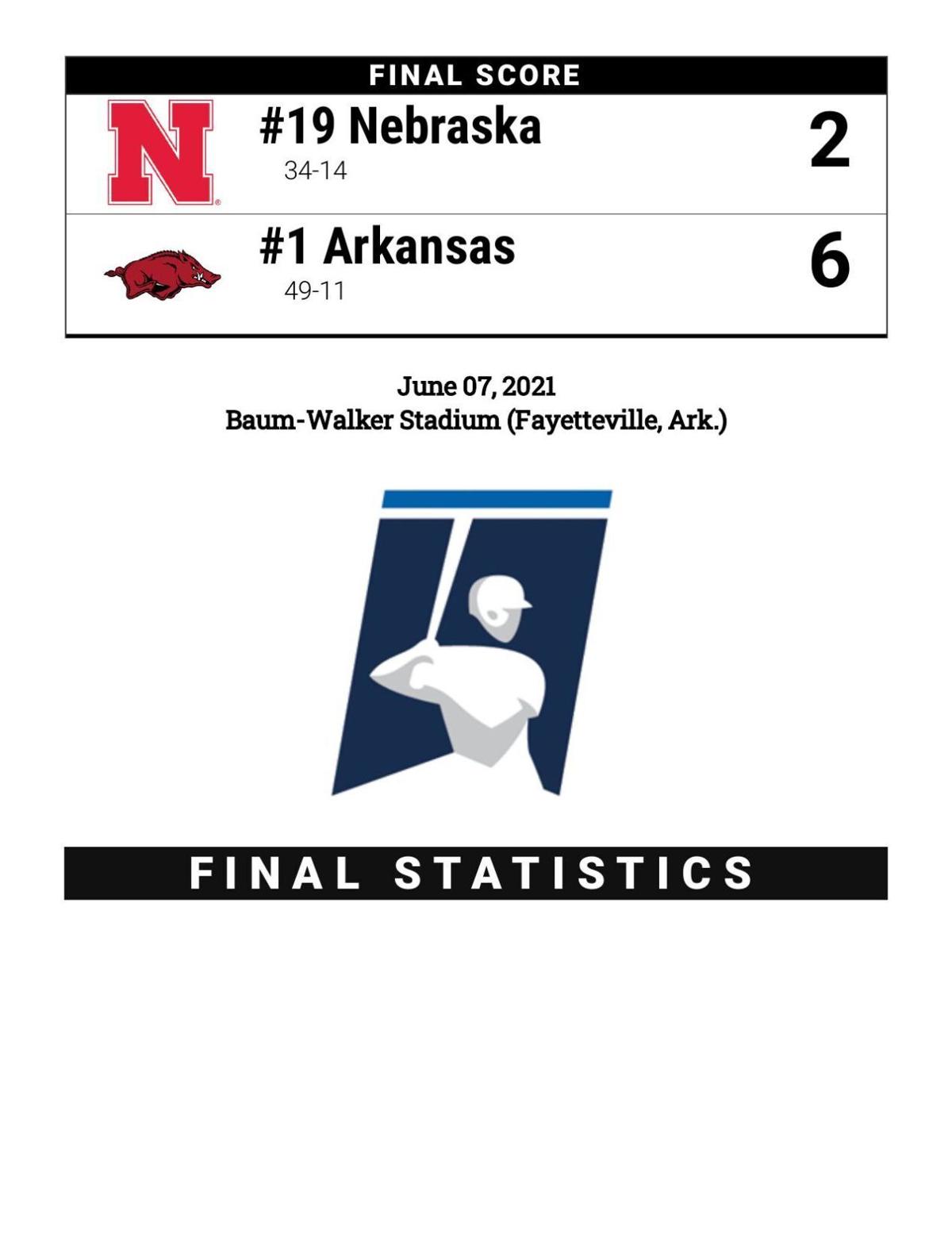 Photos: Game 7 in Fayetteville — Huskers and Razorbacks battled for trip to Super Regionals

The centerpiece: The stories that have highlighted the Journal Star's sports sections in June

Look to the Chargers and Seahawks to make the playoffs

Secret's out early. Alex Gordon will be torchlighter at this year's Cornhusker State Games

Alex Gordon, who retired from baseball last fall, will be this year's torchlighter, the State Games officials announced.

Will Bolt expects Spencer Schwellenbach to pursue a pro career, calling it a "foregone conclusion" he will be a high draft pick.

Frank's hometown of Tushka, Okla., has maybe 400 people living there. He says moments like Friday nights are what he craved when he transferred to NU.

The most anticipated matchup of the Fayetteville Regional begins in about two hours. Nebraska vs. Arkansas. Mentee vs. Mentor. Follow along.

'This team is built for that': Husker baseball gets No. 2 regional seed, potential matchup with powerful Arkansas

The Huskers were selected for the Fayetteville, Arkansas, regional where they could see top-ranked Arkansas and former Nebraska coach Dave Van Horn.

The Van Horn/Bolt connection is one of the weekend's biggest storylines, with no guarantees Nebraska and No. 1 national seed Arkansas play each other.

Italy to require 5-day quarantines for travelers from UK

Arkansas' Charlie Welch watches his three-run homer take flight in the eighth inning against Nebraska on Monday in Fayetteville, Ark.

Nebraska's Cade Povich throws a pitch against Arkansas during an NCAA regional final Monday at Baum Stadium in Fayetteville, Ark.