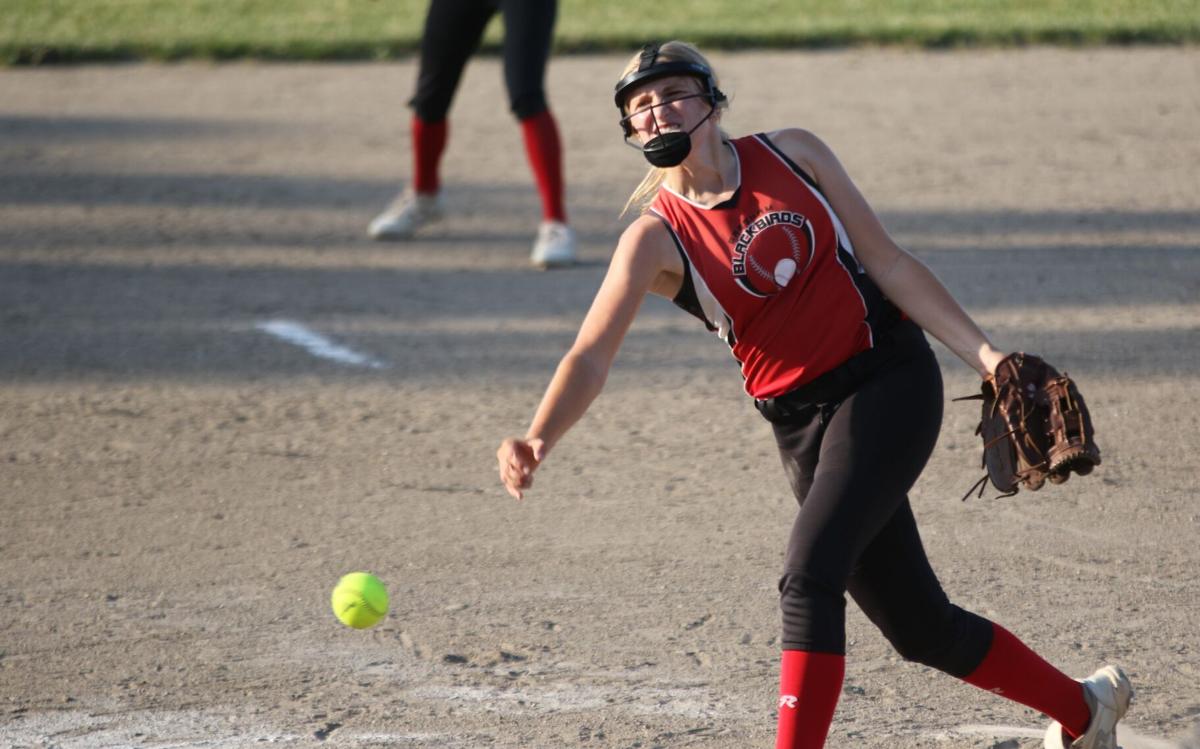 Kailey Ziegler started in the circle for Gresham and tossed two scoreless frames. She also went 3 for 3 at the plate and drove in a pair of runs in the second inning. (News-Times/Christian Horn 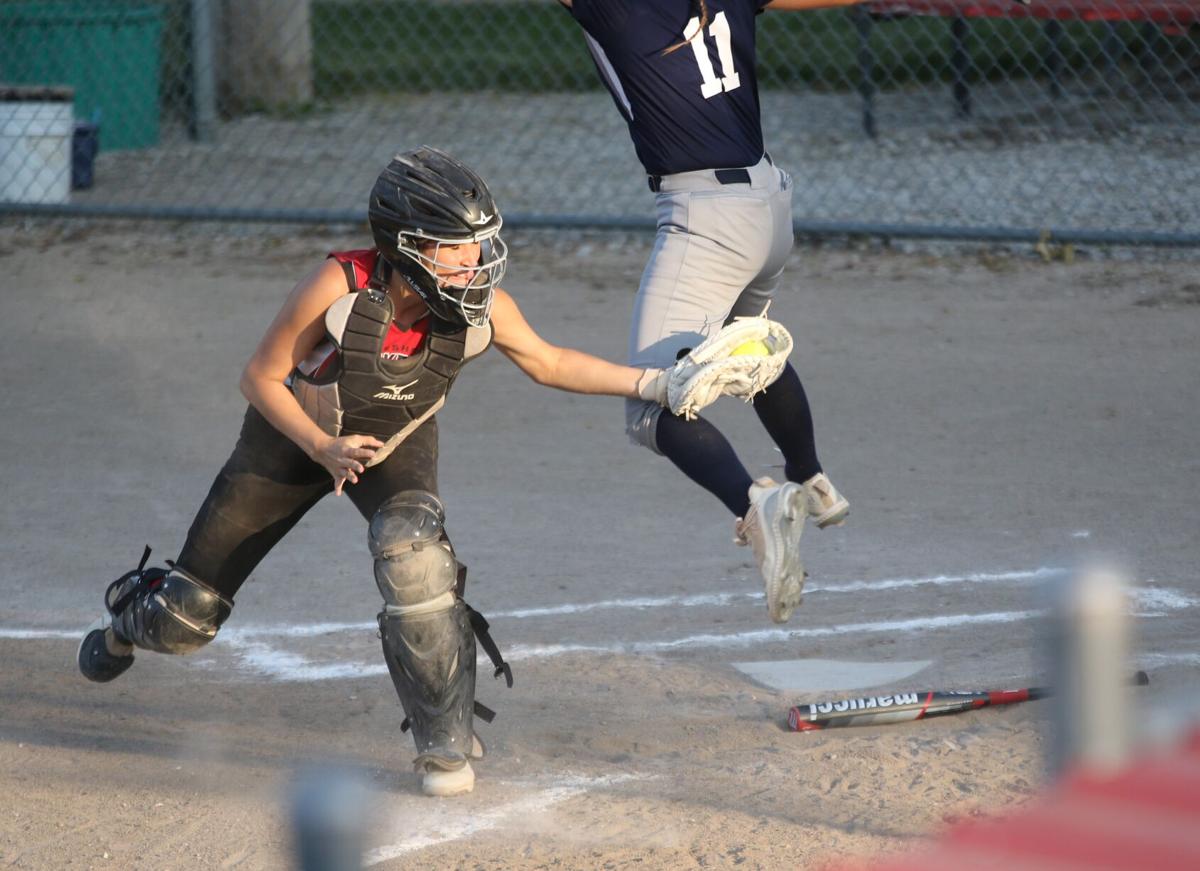 Gresham’s Hunter Hartshorn tags a Pinnacle Bank Bullet runner as she tries to score during the fourth inning on Thursday night.

GRESHAM – The Gresham 18U Blackbirds heated up early against the Pinnacle Bank Bullets on Monday night, notching 10 of 13 hits in the first two frames and rolling to an early 7-0 lead. Meanwhile, three pitchers combined to toss a five-hit shutout as the Blackbirds rolled to an 8-0 win.

Gresham starter Kailey Ziegler allowed a hit to the first batter of the game but bounced back and retired the next three batters to end the top of the first. The offense wasted no time, as Daylee Dey and Ziegler opened the home half of the inning with a pair of singles. Asia Nisly hit a ball on the nose, but it went right to the shortstop, who easily doubled off Dey for the second out of the inning.

Abby Houk drew a walk to put runners on first and second for Hunter Hartshorn, who singled to load the bases. Aurora Junge cashed in, ripping a two-RBI single to put Gresham on the board. Kaitlyn Klug followed with an RBI double of her own, extending the lead to 3-0 before Pinnacle Bank recorded the third out.

Ziegler allowed a two-out single in the top of the second, but Hartshorn caught the runner trying to steal second to end the inning.

Syd Kinnett opened the bottom of the second with a leadoff single and advanced to second on a Morgan Steckly groundout. She moved to third on a wild pitch, but Halley Heidtbrink struck out for the second out of the inning. Halle Kinnett came through with an RBI single to extend the lead to 4-0 and keep the inning alive for the top of the order.

Dey came on in relief of Ziegler to start the third inning. Ziegler left holding a 7-0 lead and allowed no runs on two hits with no walks or strikeouts in two innings of work. Dey ran into a little bit of trouble in the third, walking two batters with one out, but she got out of the jam with a lineout to first and a strikeout.

In the bottom of the third, Klug reached on a one-out single and Kinnett drew a two-out walk. A wild pitch moved both runners over for Steckly, who cashed in with an RBI single. Heidtbrink struck out to end the inning, but the run gave Gresham an 8-0 lead.

Dey found herself in another jam in the fourth inning after allowing a pair of one-out singles. Another single to right field appeared it would put Pinnacle Bank on the board, but Syd Kinnett threw a laser to the plate and Hartshorn applied the tag for the second out. Dey then coaxed a ground ball to second base to escape the jam and keep the shutout intact.

Gresham failed to score in the bottom of the fourth, but Hartshorn entered the circle for the fifth inning and sat the Bullets down in order to preserve the shutout. Ziegler, Dey and Hartshorn combined to toss a five-hitter, and Dey and Hartshorn each recorded one strikeout.

Ziegler also led the Blackbirds on offense, going 3 for 3 with a pair of singles, a double and two RBIs. Hartshorn also had a multihit game, going 2 for 2 with an RBI double.

Some props to look at tonight between the Lightning and Islanders

Some props to look at tonight between the Lightning and Islanders

YORK - On May 5, 2021 York senior Maddie Portwine signed to run Cross Country and Track at the University of Nebraska.

Winning is a lot easier when you start with good players, and in college sports that begins with recruiting. Enter Jaylen Reyes.

Kailey Ziegler started in the circle for Gresham and tossed two scoreless frames. She also went 3 for 3 at the plate and drove in a pair of runs in the second inning. (News-Times/Christian Horn

Gresham’s Hunter Hartshorn tags a Pinnacle Bank Bullet runner as she tries to score during the fourth inning on Thursday night.