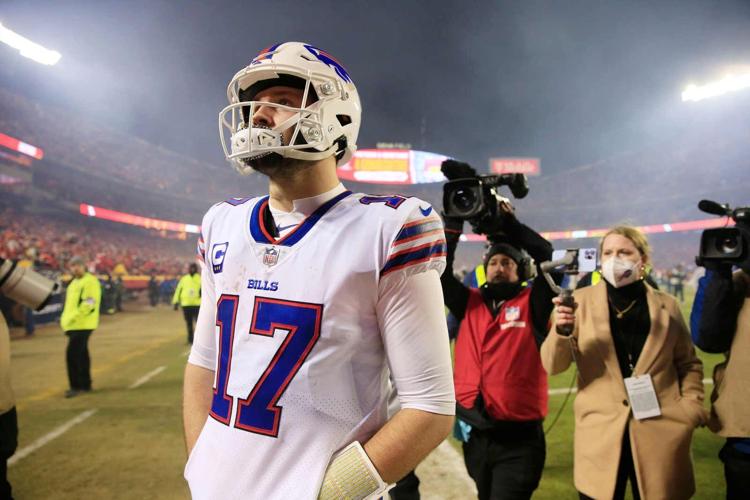 Buffalo Bills quarterback Josh Allen (17) walks off the field after the Bills overtime loss to the Kansas City Chiefs. 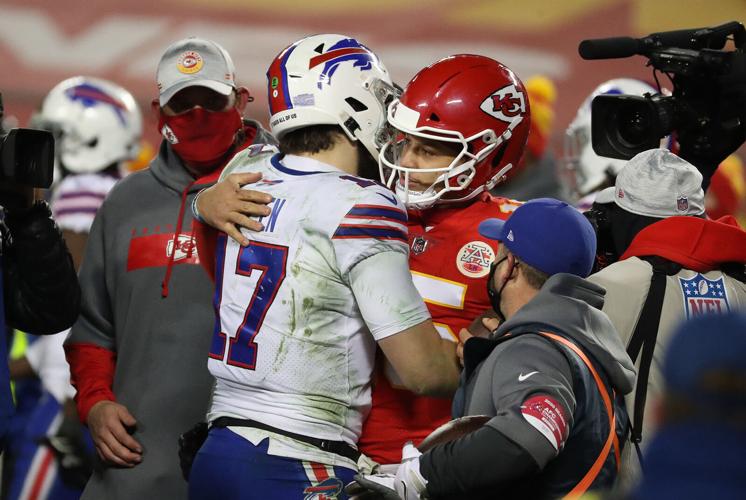 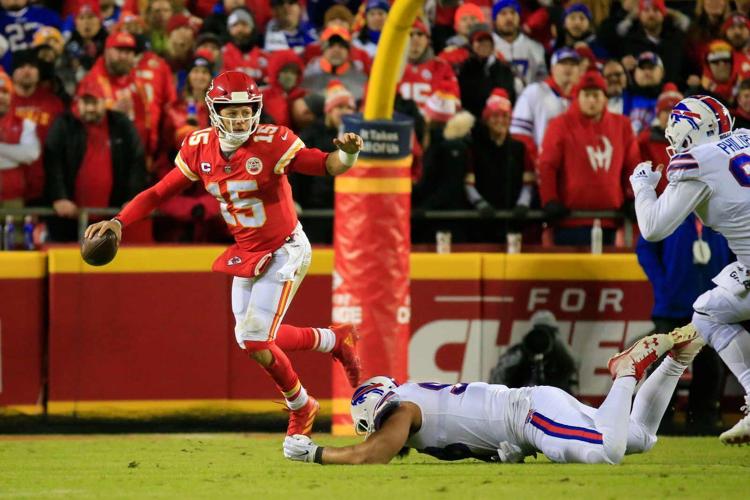 Patrick Mahomes proved to be just out of the Bills' reach Sunday night in the AFC divisional playoffs.

By Ben Tsujimoto Special to The News

Patrick Mahomes had every reason to join the raucous celebration with his teammates after the Kansas City Chiefs squashed the Buffalo Bills' Super Bowl dreams for the second consecutive year.

Josh Allen and Gabriel Davis connected for four touchdowns – including two inside the two-minute warning to twice give the Buffalo Bills a late lead – but the NFL’s best defense couldn’t hang on in a thrilling 42-36 OT loss.

His third touchdown pass, an 8-yard toss to Travis Kelce in overtime, was the decisive moment in a 42-36 victory at Arrowhead Stadium, sending Chiefs fans into ecstasy and punctuating a remarkable never-say-die performance.

Instead of basking in the spotlight and rubbing the loss in the Bills' face, Mahomes ran across the field, bobbing and weaving around players and media, to meet his counterpart – Bills quarterback Josh Allen – to share a hug and pats on the back. The gesture was a sign of respect for Allen, who threw for four touchdowns – all to Gabriel Davis – in the losing effort.

.@PatrickMahomes left the celebration and ran across the whole field to find @JoshAllenQB.Ultimate respect for these competitors. #NFLPlayoffs pic.twitter.com/T5uEk4OXty

Mahomes' act was meaningful to Allen, who mentioned the exchange when asked in the postgame press conference about how he was taking in the emotions immediately after the gut-wrenching defeat.

"I have a lot of respect of Pat," Allen said. "He throws the winning touchdown and he comes straight over and finds me. To be in that situation and to do that, that was pretty cool of him to that."

The 42-36 overtime loss to the Kansas City Chiefs will immediately join the four Super Bowl losses and “Homerun Throwback” as the absolute most painful in franchise history, writes Jay Skurski.

The Chiefs' quarterback, selected this year to his fourth-straight Pro Bowl, also quick to praise Allen – and recognize what's blooming into a legitimate rivalry with staying power – in his postgame interview.

“Josh played his [butt] off, pardon my language,” Mahomes said. “It was a great game between two great football teams ... we're going to play this team a lot of times in games like this. With that quarterback, with that coaching staff and the players they have, there's going to be a lot of battles.

Mahomes and Allen are considered the elite young quarterbacks in the NFL – despite Allen's snub from the Pro Bowl – and Sunday showcased their special qualities on a mammoth stage.

Combined, the pair tallied more than 700 passing yards and seven touchdowns without committing a turnover. Each quarterback also led his team in rushing yards, with Mahomes' 69 nipping Allen's 68.

They saved their best for last, too, totaling 31 points in the game's final 5:22 in a true "last one with the ball wins" scenario.

Among the questions in the aftermath of the Buffalo Bills' 42-36 overtime loss to the Kansas City Chiefs is the decision to kick the ball into the end zone with 13 seconds remaining rather than squib the ball.

Tension peaked in a riveting fourth quarter that saw 25 total points scored in the game's final two minutes, leading to a roller coaster of emotions – stress, joy, anger and disappointment.

The Kansas City Chiefs’ team speed was the biggest factor from start to finish – and especially at the finish – in the Buffalo Bills’ 42-36 overtime loss in the AFC divisional playoff game.

A heartache finish for fans after raucous tailgating in Kansas City

Five hours before kickoff, dozens of fans brought a slice of Orchard Park to a parking lot in the shadow of Arrowhead Stadium.

US Soccer reaches equal pay agreement for men and women

Buffalo Bills quarterback Josh Allen (17) walks off the field after the Bills overtime loss to the Kansas City Chiefs.

Patrick Mahomes proved to be just out of the Bills' reach Sunday night in the AFC divisional playoffs.