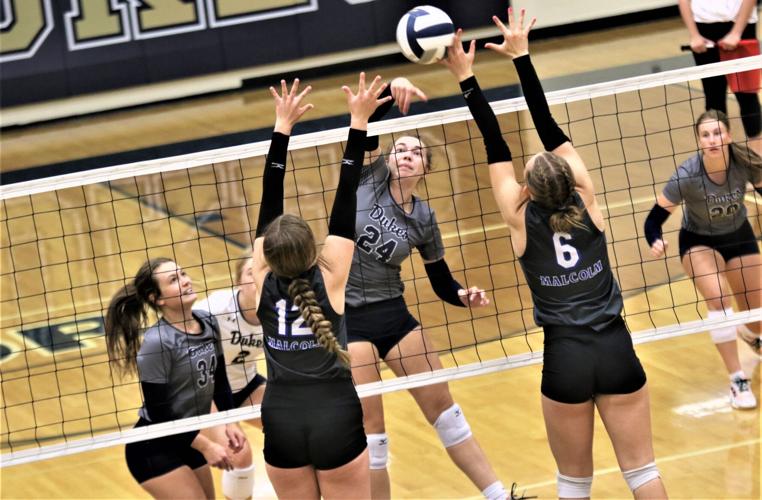 Rylyn Cast (24) hammers a kill past the block of Malcolm’s Addy Hanson (6) and Diamond Sedlak (12) during the first set Tuesday night. Cast finished with nine kills, three aces and a pair of blocks but the Dukes dropped the match 2-1 to split their home tri. 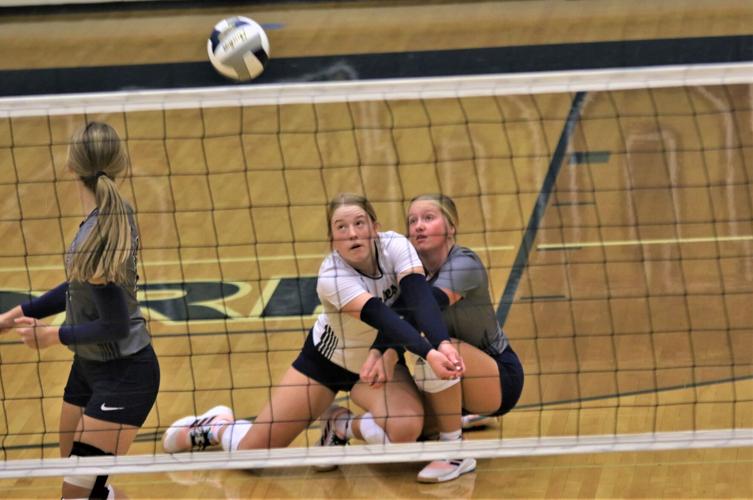 York seniors Josie Loosvelt (left) and Morgan Driewer collide as they lunge for the ball during the first set against Plattsmouth at the Duke’s tri Tuesday evening. Despite the contact, the seniors got the ball over the net as York swept the Blue Devils 25-17, 25-15. 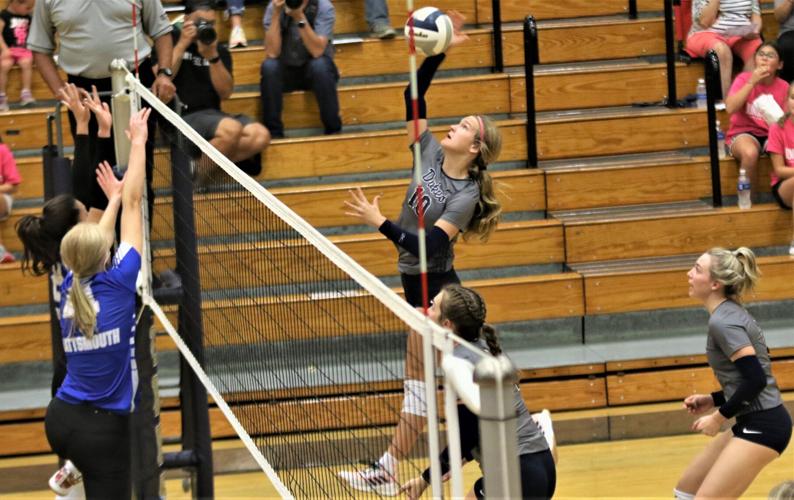 Sophomore Chloe Koch (10) unofficially tied for York’s team high in kills with five in a sweep against Plattsmouth during the opening match of the Dukes’ home tri Tuesday.

YORK – The York Dukes welcomed the Plattsmouth Blue Devils and Malcolm Clippers to town for a home volleyball tri Tuesday night. Despite some sluggish play in the opener, York rolled past Plattsmouth with a 25-17, 25-17 sweep. The Dukes continued with a hot start against Malcolm in the nightcap, taking the opening set 25-21. However, the Clippers rallied for a 25-21 win in the second set and controlled the third from the jump, taking the match 2-1 with a 25-15 win.

“That was a tough loss. We lost the mental game tonight. Going into this one, the girls were fired up. Malcolm was a little slow, a little down and we capitalized on that,” York head coach Kelby Phillips said. “We executed, we did some really great things. It’s unfortunate that Reese (Hirschfeld) one of our setters went down in the first set, but the girls scrambled and pulled that first one out. In the second, we came out strong and they had a run in there, came back a little bit at the end of the set but made some crucial errors and didn’t finish.”

York put together a solid performance in the opening set, getting a big 6-0 run to open up some breathing room in the middle of the set before pulling out a 25-21 win. The two teams traded blows for the first half of the second set before the Clippers seized control with a 7-0 run to turn a 12-11 hole into an 18-12 lead.

The Dukes battled back, getting as close as 23-21, but Malcolm took the final two points to force a decisive third set. York won the first rally in the final set, but the Clippers took nine of the next 10 points and York never got closer than five points the rest of the way in a 25-15 loss.

“Coming out in the third one, we played scared and resorted back to things, the bad habits we’ve been trying to break,” Phillips said. We have a tendency of doing that when we get uncomfortable, so that’s something we’ll have to continue to work on is how do we commit to the good things and how do we still fight even when it’s uncomfortable?”

Defensively, York had no answer for Malcolm freshman Halle Dolliver, who hammered 10 kills in the third set alone and finished with a match-high 20.

Outside of those three hitters, sophomore Chloe Koch notched three winners and senior Dannika Lamberty rounded out the attack with two.

Cast crushed all three of York’s aces at the service line and added a pair of blocks, while Koch assisted on one.

“We still do a lot of really good things. When we execute, when we come out we’re confident – we had them,” Phillips said. “We looked good in the first set, even most of the way through the second set. It shows the potential is there, and we’ve got to continue working on some things so it’s not just sometimes but it’s all the time.”

York 2, Plattsmouth 0: York picked up a two-set sweep against the Blue Devils in the opening match, but the hosts didn’t play their cleanest volleyball of the season in the process.

“It went okay; it wasn’t the fastest pace that it could have been, didn’t quite come out with the intensity that we’re hoping for,” Phillips said. “I thought they did a good job between sets regrouping on our serve receive, got quite a few more balls up to the setter. We’re working on not being satisfied with okay passes, always striving for the perfect pass and keeping the tempo, especially with our sets to the thins and even some of the ones to our middles we have to keep pace.”

Midway through the opening set, York led just 17-15 before embarking on a decisive 5-0 run sparked by an ace and a kill from Burke and back-to-back-to-back kills from Wilkinson. That run proved critical to create some needed breathing room in a 25-17 win.

Plattsmouth led 6-2 early in the second set before a 13-1 York run created all the cushion the Dukes needed to break out the brooms with a 25-15 victory.

Cast and Koch unofficially paced the York attack in the sweep with five kills apiece, while Wilkinson added four and Lamberty notched three. Burke and sophomore Reese Hirschfeld tallied a pair of winners each to round out the Dukes’ offense.

At the service line, Burke crushed a pair of aces and Wilkinson had one. Lamberty and Cast recorded solo blocks for the Dukes at the net.

Behind the on-field smiles and highlights, Maurice Purify was a young man who didn’t know how to grieve. Those moments in helmets and pads were his only sanctuaries from the weight of life.

There's a big game Friday night. But ratings and districts, in the grand scheme of things, won't mean all that much to two of York's key figures.

A bye week and new defensive coordinator under an interim coach have produced a few changes to the depth chart for Nebraska.

The top-4 teams in the college volleyball rankings stayed the same after those teams all kept winning last week.

Vikings pull away from Dukes in second half

WAVERLY – For two and three-fourths quarters, the York Dukes remained within shouting distance of the host Waverly Vikings on Friday night.

Many coaches have spoken out about Nebraska's coaching vacancy recently. Here's what they've had to say, and how it impacts their Huskers' "heat level."

Cross County wins the battle of the Cougars in three sets

STROMSBURG – Cross County and Central Valley squared off Thursday night with team name bragging rights on the line. Behind a balanced offensiv…

Mustangs, Broncos and Panthers all compete at UNK

Rylyn Cast (24) hammers a kill past the block of Malcolm’s Addy Hanson (6) and Diamond Sedlak (12) during the first set Tuesday night. Cast finished with nine kills, three aces and a pair of blocks but the Dukes dropped the match 2-1 to split their home tri.

York seniors Josie Loosvelt (left) and Morgan Driewer collide as they lunge for the ball during the first set against Plattsmouth at the Duke’s tri Tuesday evening. Despite the contact, the seniors got the ball over the net as York swept the Blue Devils 25-17, 25-15.

Sophomore Chloe Koch (10) unofficially tied for York’s team high in kills with five in a sweep against Plattsmouth during the opening match of the Dukes’ home tri Tuesday.