World Cup live: US needs win against Iran to advance 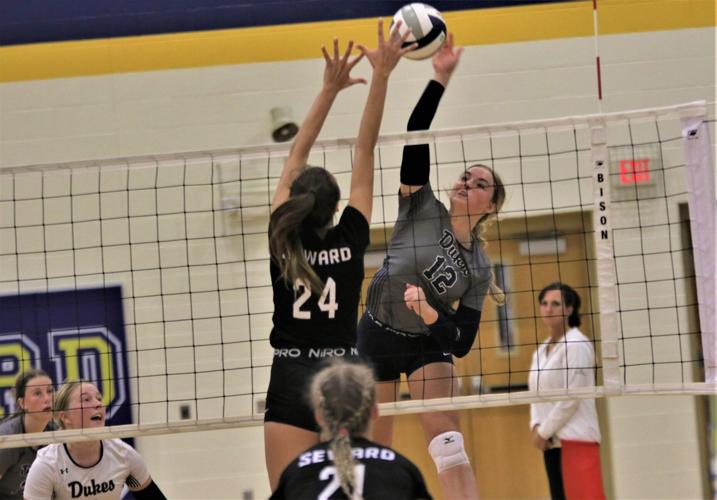 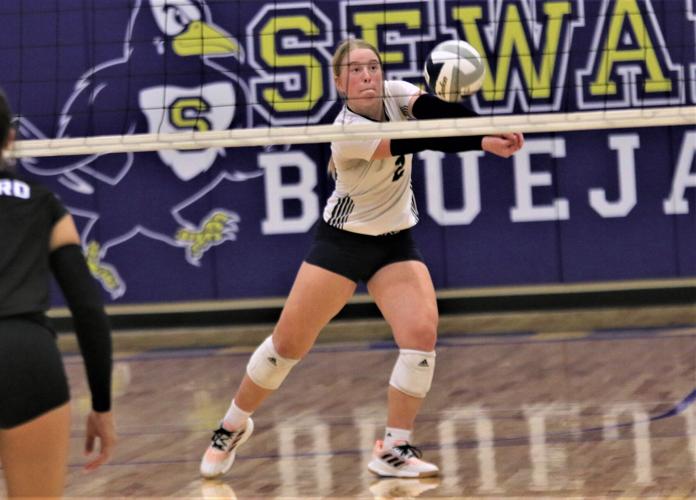 Senior libero Josie Loosvelt (2) led York with 21 digs and added the team’s only ace as the Dukes outlasted Seward in a three-set thriller Thursday night.

SEWARD – In front of a raucous crowd at the Seward High School gym Thursday night, the Seward Bluejays and York Dukes traded blows all night long in a battle of ranked teams that more than lived up to the hype.

After Seward (No. 6 in the Lincoln Journal Star) and York (No. 7) split the first two sets, the visitors built an early lead before Seward mounted a rally and eventually evened the decisive set at 24.

Back and forth the teams went in a thrilling marathon of a match, until at long last Cynley Wilkinson hammered an attack into the back row, a rocket that bounced off the arms of a Seward defender and well out of reach to end it, giving York a 23-25, 25-23, 30-28 win.

“I’ve been looking forward to this match, kind of looking up and scouting ahead of time,” Dukes head coach Kelby Phillips said. “It was really exciting to get to see them tonight, and hopefully we get to see them again on Saturday. That was a really fun match, and I’m crazy proud of this group of girls.”

The match served as a fantastic bookend to the Bluejays’ host tri, with both schools picking up victories over Beatrice earlier in the evening.

“Coming off of last week, it’s really good to be able to go 3-0 this week,” Phillips said. “It’s kind of a crucial turning point for the girls as we’re making some changes in the lineups and we have some kids stepping into new roles. They are killing it, and everybody else that is used to what they’re doing, they are taking their game up to the next level.”

The two teams traded blows for much of the first set before Seward appeared to seize control with a 7-1 run to take a 23-19 lead late. However, York immediately landed a counterpunch, rattling off four straight points to even the set at 23 and force a Bluejay timeout.

A service error gave Seward the lead coming out of the break, and the hosts took the next point to win the opening set. In the huddle in between sets, the Dukes never panicked.

“We thought of it more as a timeout, just coming back from a bad run,” Wilkinson said of the team’s mindset in the huddle. “We knew we had to execute the next set and work extra hard to bring home the third set.”

York came out of the gates swinging in the second set, building leads of 11-5, 14-7 and 18-10 before Seward clawed back into it with a 7-2 run. Trailing 24-21, the Bluejays fought off a pair of set points before Kelly Erwin hammered a kill to give York a 25-23 win and force a third set.

In the huddle, Phillips reminded the team of a philosophy Huskers head coach John Cook teaches to his players.

“(He) said when you play big teams, you have to make big plays and you’ve got to win big points,” Phillips said. “We talked about that tonight, especially in the Seward match. There are certain points that are a little more crucial, and when you can capitalize on those and win those points, that’s how you win and finish games like that.”

Her team took the message to heart, as York once again came out sizzling to open the third set. The Dukes won 10 of the first 13 rallies to burn through both Seward timeouts and take control early. However, the Bluejays were a top-10 team for a reason; refusing to fold, the hosts immediately battled back to tie the set at 14.

York regained momentum, rattling off four straight points from four different players – kills from Dannika Lamberty, Mia Burke and Erwin and a Josie Loosvelt ace. Seward took the Dukes’ blow and responded with a counterpunch of their own in the form of a 6-3 run to cut the deficit to one.

From there, the teams took turns landing haymakers, with York eventually setting up match point at 24-23 on a Lamberty kill coming out of a timeout. Sophia Turek responded with back-to-back kills of her own to give the Bluejays the lead, but a service error wasted Seward’s first match point.

Back and forth the teams went, with York turning back two more match points and Seward fighting off one to bring the set to a 28-28 standstill. A net violation gave a point to York, and following a lengthy rally, Wilkinson came up with the final blow to give the Dukes a 30-28 win in a marathon of a third set.

“Our team was working so hard and getting so many balls up,” Wilkinson said of her mindset on the winning kill. “I just really wanted to finish it for all of our hard work. It just had to be finished.”

The sophomore led the York attack with 13 kills, followed by seven from Burke and five apiece from Erwin, Lamberty and Chloe Koch. Rylyn Cast rounded out the offense with three winners.

Loosvelt crushed the Dukes’ only ace, while Cast led the effort at net with a trio of blocks. Loosvelt collected 21 digs to pace York, followed by Burke with 15 and 10 from Wilkinson. Libby Troester notched a team-high 20 assists and Morgan Driewer added 14.

Turek turned in a monster game in a losing effort for Seward, as the senior unofficially hammered a match-high 16 kills. Kelsey Miller and Amara Seibert followed with nine winners apiece and Keira Lliteras added four. Miller and Seibert also led the Bluejays at the net with four blocks each.

In the end, however, it wasn’t enough to walk away with the win in a clash of top-10 teams that more than lived up to the billing.

“(We) came ready to fight tonight, and I love that disposition, I love that energy,” Phillips said. “We talk a lot about composure. You have to play to win, you have to play aggressive and you can’t start to play scared with that fear of playing not to lose, like the safe place. You’ve got to go for it and you’ve got to play big.”

SEWARD – The York Dukes took to the court for the second time this week Thursday night, traveling to Seward for a tri with the Bluejays and Be…

Dunham takes her game to the next level with Concordia University

Break it down: Dancers begin charting a path to the Paris Olympics

Ever wondered how much money one wins at the FIFA World Cup?

Senior libero Josie Loosvelt (2) led York with 21 digs and added the team’s only ace as the Dukes outlasted Seward in a three-set thriller Thursday night.