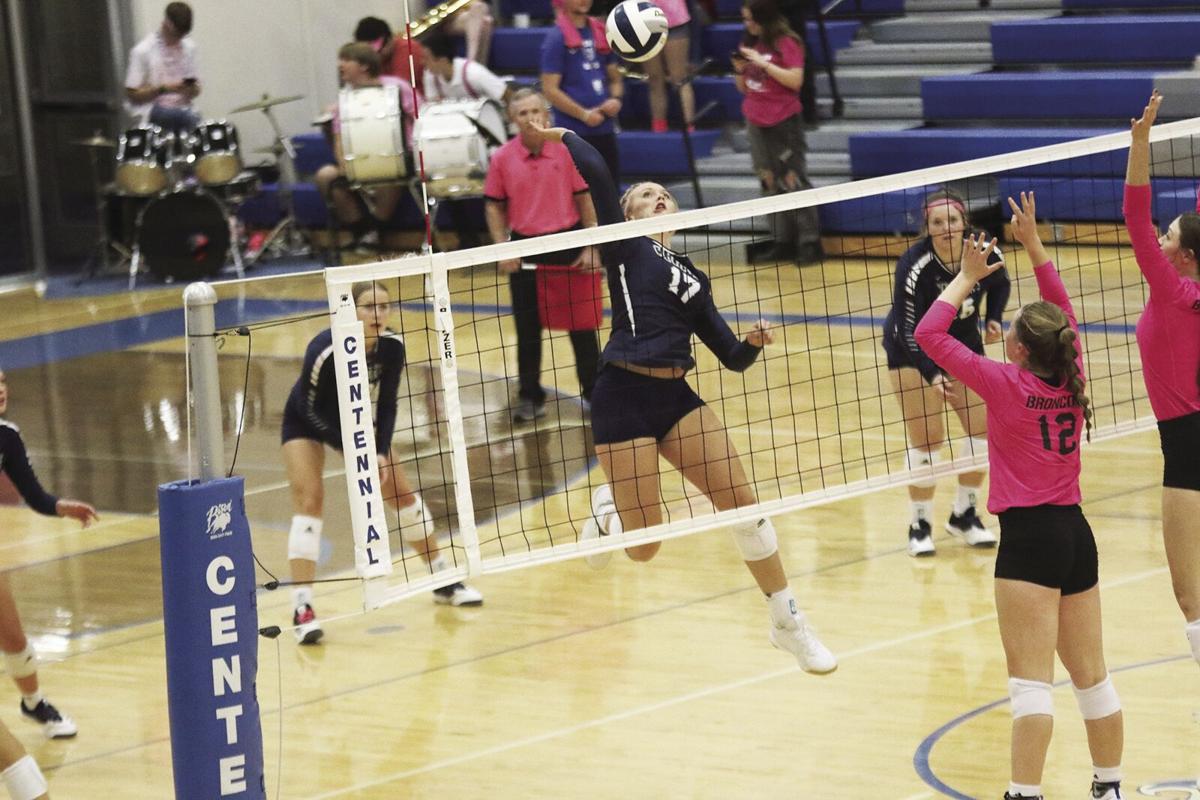 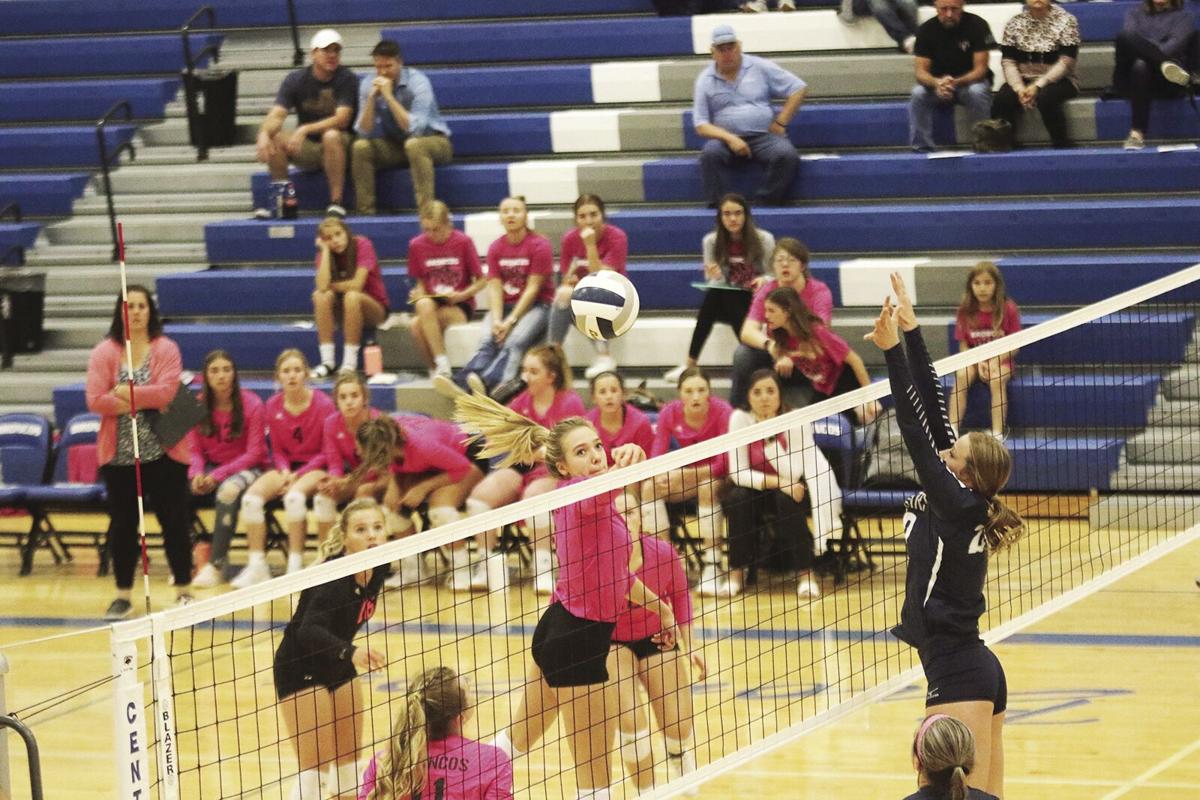 Cambria Saunders (2) of Centennial finds an opening against the Cross County defense on Tuesday evening. Saunders unofficially recorded seven kills for the Broncos, but the Cougars pulled out the win in four sets. 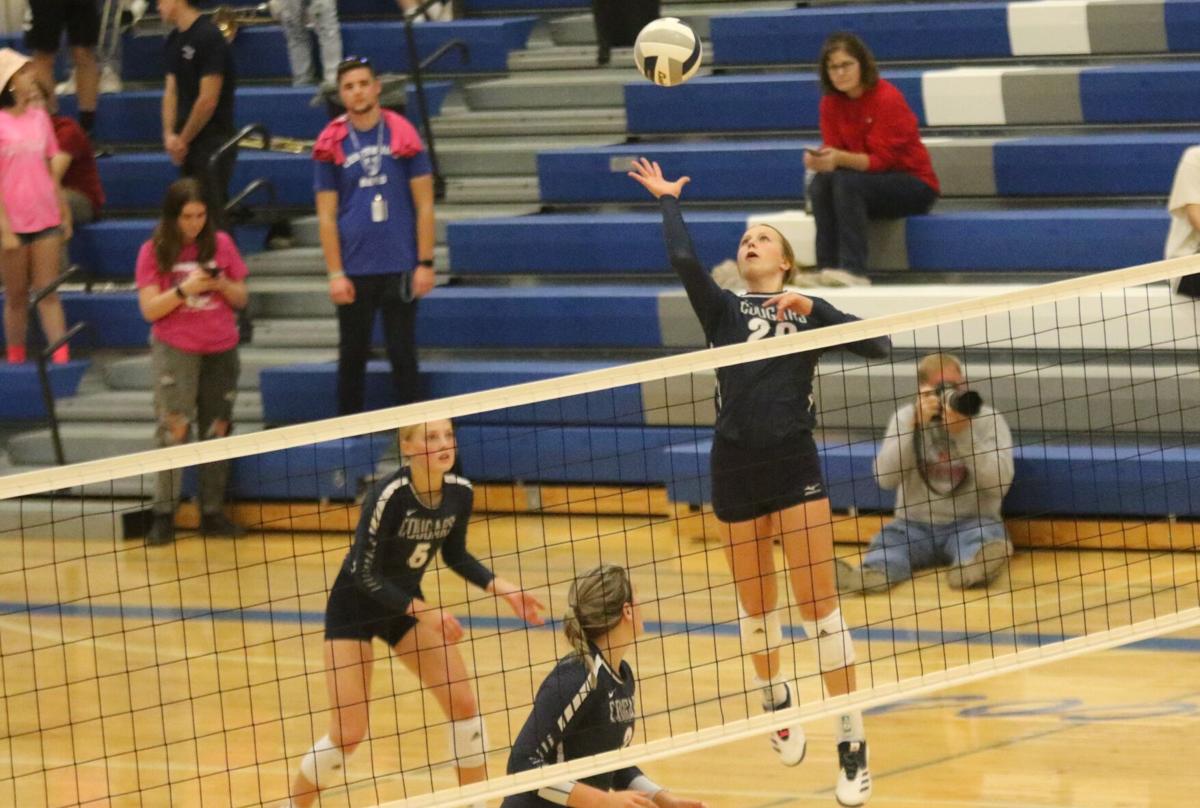 The Cougars’ Lilly Peterson (20) rises for the kill in a win at Centennial on Tuesday. The sophomore unofficially hammered a match-high 19 kills and also blocked a shot.

UTICA – For much of the fourth set, the Centennial Broncos seemed destined to force a fifth set against the Cross County Cougars. They built an early 12-4 lead, and after an illegal substitution negated a 4-0 Cougars run, they weathered pushed the lead to 19-11.

However, Cross County refused to fold. The Cougars chipped away at the deficit, slowly cutting it to 19-17 before Centennial scored five of the next seven points to force a set point at 24-19. Cross County then fought off five straight set points to even the match and eventually outlasted Centennial down the stretch to win a wild fourth set 32-30 and win the match 3-1.

Cross County dominated early, scoring the first 11 points of the match and building a 13-1 lead in the opening set before the Broncos fought back.

However, Centennial could never cut the deficit to fewer than nine points in a 25-16 Cougars win.

The Broncos flipped the script in the second set, scoring 17 of the first 18 points to build a commanding lead. Cross County chipped away at the deficit some, but Centennial still rolled to a 25-15 win to even the match.

A 10-1 Cross County run broke open what had been a tight third set, but Centennial answered back.

The Broncos eventually tied the match at 17 before the Cougars pulled away down the stretch for a 25-22 win.

Looking to force a decisive fifth set, Centennial shot out of the gate in the fourth set. They built an early 12-4 lead before the Cougars rattled off four straight points and forced a Broncos timeout.

Following a lengthy discussion out of the timeout, however, officials ruled there had been an illegal Cross County substitution, negating the Cougar run and giving Centennial a 13-5 lead.

The Broncos pushed the lead to 10 with consecutive points out of the timeout, but the Cougars refused to fold.

Centennial answered right back, taking five of the next seven points to take a 24-19 lead.

With their backs against the wall, Cross County punched back.

Lilly Peterson hammered a kill and recorded a block on the next point to fight off a pair of set points.

A Centennial error shifted momentum, and Peterson followed with another kill. The Broncos then committed a net violation, and suddenly the set was tied at 24.

The two teams traded blows down the stretch, but tied at 30, a Centennial mistake at the service line opened the door for Cross County.

Molly Prochaska stepped over the line on the Broncos' serve, giving the Cougars a 31-30 lead and setting up match point.

Cross County slammed the door on Centennial during the next point, clinching a 32-30 win in a wild fourth set to win the match 3-1.

At the service line, Anderson led Cross County with three aces, while Lemburg followed with two and Bexton Lundstrom and Josi Noble each crushed one. Bargen led the Broncos with three aces, and Naber and Samara Ruether each tallied one.

Sandell unofficially led the Cougars with three blocks, while sophomore Cora Payne stuffed three shots for the Broncos in the loss.

KEARNEY – For a mid-fall day the weather could not have been any better for the 50th Anniversary of the Nebraska State Cross Country Championships.

Scott Frost has enough headaches without his boss trying to influence staff decisions.

Cross County wins comfortably in first round of football playoffs

STROMSBURG – When Cross County had the ball Thursday night, they didn’t take too long at all to put points on the board.

Steven M. Sipple: Out of respect for Fred, it's time to attach real expectations to Husker hoops

Fred Hoiberg is a bit of a magician in the sense that he's 5-34 in the Big Ten at Nebraska, and hardly anyone complains. The pass he gets is sort of bizarre.

Heartland outmatched in second half against Stanton in playoff football

STANTON – For a half, the No. 12 seed Heartland Huskies hung with the No. 5 seed Stanton Mustangs as the hosts took just a 14-6 lead into the …

Scott Frost's Huskers have failed to summit Mt. Close. The key? 'Get an inch better'

C-l-o-s-e. The five-letter word has become a source of frustration among coaches, players, and yes, the fans. How does NU overcome it?

Cambria Saunders (2) of Centennial finds an opening against the Cross County defense on Tuesday evening. Saunders unofficially recorded seven kills for the Broncos, but the Cougars pulled out the win in four sets.

The Cougars’ Lilly Peterson (20) rises for the kill in a win at Centennial on Tuesday. The sophomore unofficially hammered a match-high 19 kills and also blocked a shot.