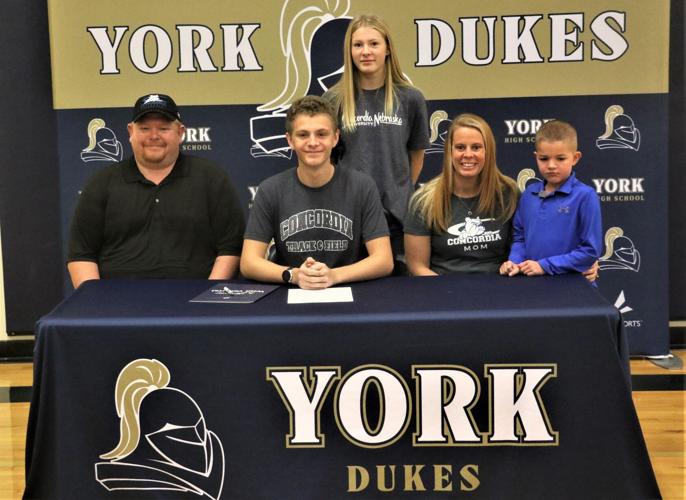 On Wednesday morning at York High School, Dukes distance runner Colin Pinneo signed his letter of intent to continue his athletic career at the next level with the Concordia Bulldogs. Also pictured are (from left): father Casey, Colin, sister Addison, mother Erin and brother Gavin. 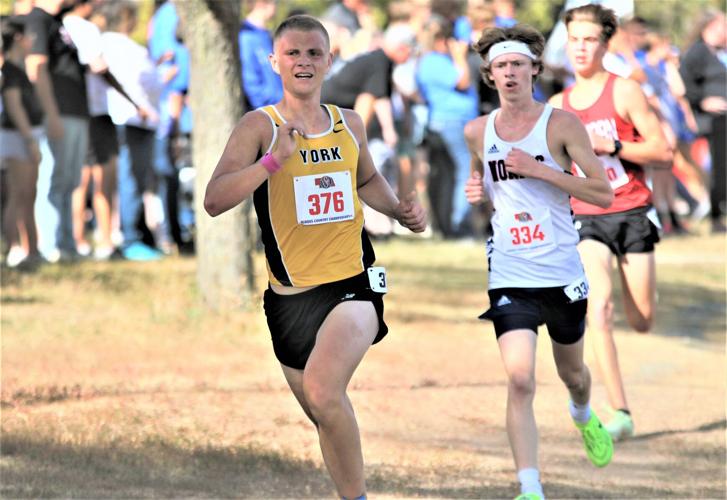 York senior Colin Pinneo paces ahead of a Norris runner during the Class B boys race at the state cross country meet this fall. Pinneo closed his prep career with a 16th-place finish and will compete in both cross country and track next fall at Concordia University.

YORK – The seeds that eventually led to Colin Pinneo’s signing day on Wednesday morning were planted a few years ago, when Concordia head cross country and track and field coach Matt Beisel introduced himself to Pinneo, then a sophomore.

“We were at the Aurora invite and Beisel came up to me,” he said. “He pulled me aside, got my number and ever since then we’ve been constantly talking to each other.”

Despite the early introduction, Pinneo said he didn’t think he would ultimately end up a Bulldog. The Dukes’ distance runner considered a few other schools, with the University of Nebraska at Kearney chief among them.

However, those notions ended up being for naught as the York senior put pen to paper Wednesday morning at York High School and inked his letter of intent to run cross country and track for Concordia next fall.

“I always envisioned myself going somewhere else, but (Beisel) was super nice, super persistent and after the visit it just felt right so I decided that’s where I wanted to go,” Pinneo said. “I liked the size of the school. It’s a smaller school, and it just felt right. That’s all I can really say. It felt right.”

For Beisel’s part, Pinneo was on his radar from the jump. The Bulldogs’ head coach said one of his specialties as a recruiter is paying very close attention to “who’s who in Nebraska high school running, throwing and jumping.”

As a result, he usually initiates contact with most track athletes across the state at some point, ideally early on in the recruiting process. Pinneo’s strong freshmen and sophomore seasons were enough to entice Beisel, so the coach and runner struck up a bond.

“He just happened to be at a lot of meets I was at over the last several years, so I always went up and talked to him, cheered him on and as he got out of his junior year and moved into the summer – like I did with every one of those kids – I asked him to apply, get an acceptance, make a phone call with me so we can get to know each other better and then come for a visit,” Beisel said. “When those things started happening, I think it just hit him that Concordia was the right place for him and it had all the things he was looking for. I’m very thankful and blessed that I get to be his coach next year.”

Pinneo left his mark on the Dukes throughout his prep career, running at the state cross country meet in each of his four years with a pair of 11th-place medals in 2020 and 2021. This fall, he finished one spot shy of the podium in 16th place amid tough conditions at the Kearney Country Club.

“Colin’s meant a lot to the program. He contributed right away as a freshman, worked real hard entering high school and has continued to work hard,” York head coach Eric Rasmussen said. “He’s done a great job both in terms of performance but also helping our young team last year really know what to do and understand what it takes to be successful.”

Pinneo said he plans to major in secondary education with an emphasis on math and special education at Concordia, and both runner and coach expressed optimism he’ll be able to contribute for the Bulldogs from Day One in cross country. Beisel said they were still ironing out what role would allow him to best excel during track season but noted they had discussed the steeplechase as a potential fit.

More than his performance as a runner, the Concordia head coach said Pinneo’s biggest strength might be his work ethic.

“He is a person who is very focused and intent on optimal nutrition, optimal training and trying to figure out how to do it all right,” Beisel said. “Not everyone is like that. He’s very methodical and analytical as a runner, a very smart guy, and he thinks things through. I’m very much like that too, so one of the things that really appeals is the two of us working together in a partnership to unlock the mental, emotional and physical puzzle pieces that can help him to be the best runner he can be.”

Pinneo said he felt his biggest strength was his willingness to listen to coaches and be receptive and open-minded to their ideas and suggestions. That factor should serve him well when he steps on campus in the fall, but first comes one last go-around with York track and field in the spring.

“I think the world of him and I’m very grateful to God that things worked out and I’ll get to be his coach,” Beisel said. “Until then, I’ll be cheering on Colin and his teammates as they head into the track season and he finishes out his senior year.”

YORK – In the first of four Crossroads Conference tournament semifinal games at the York City Auditorium on Thursday afternoon, the 4-seed Mer…

YORK – For much of the first quarter Friday night, Garrett Ivey could not miss.

YORK – With the game clock rapidly approaching triple zeros, York needed a prayer. A woeful shooting performance in the first half put the Duk…

YORK – There were some uncertain moments in the first quarter for head coach Chris Beagle and the Nebraska Lutheran Knights.

YORK – Buoyed by a scorching start from behind the 3-point arc, the Nebraska Lutheran boys raced out to a double-digit lead in the second quar…

YORK – The York boys basketball team found itself in a funk entering the Central Conference tournament, having lost three of its previous four games.

YORK – With a little over four minutes remaining in Friday afternoon’s third-place game at the CRC tournament, the top-seeded BDS girls took a…

Ken and I have practically built a second home on the basketball court over the past week, with the Crossroads Conference and then the Central…

No. 6 Virginia holds off second-half surge by Syracuse

Burrow, Bengals falter but should stay among AFC contenders

Mahomes and Hurts to make history at Super Bowl LVII

Mahomes and Hurts to make history at Super Bowl LVII

On Wednesday morning at York High School, Dukes distance runner Colin Pinneo signed his letter of intent to continue his athletic career at the next level with the Concordia Bulldogs. Also pictured are (from left): father Casey, Colin, sister Addison, mother Erin and brother Gavin.

York senior Colin Pinneo paces ahead of a Norris runner during the Class B boys race at the state cross country meet this fall. Pinneo closed his prep career with a 16th-place finish and will compete in both cross country and track next fall at Concordia University.