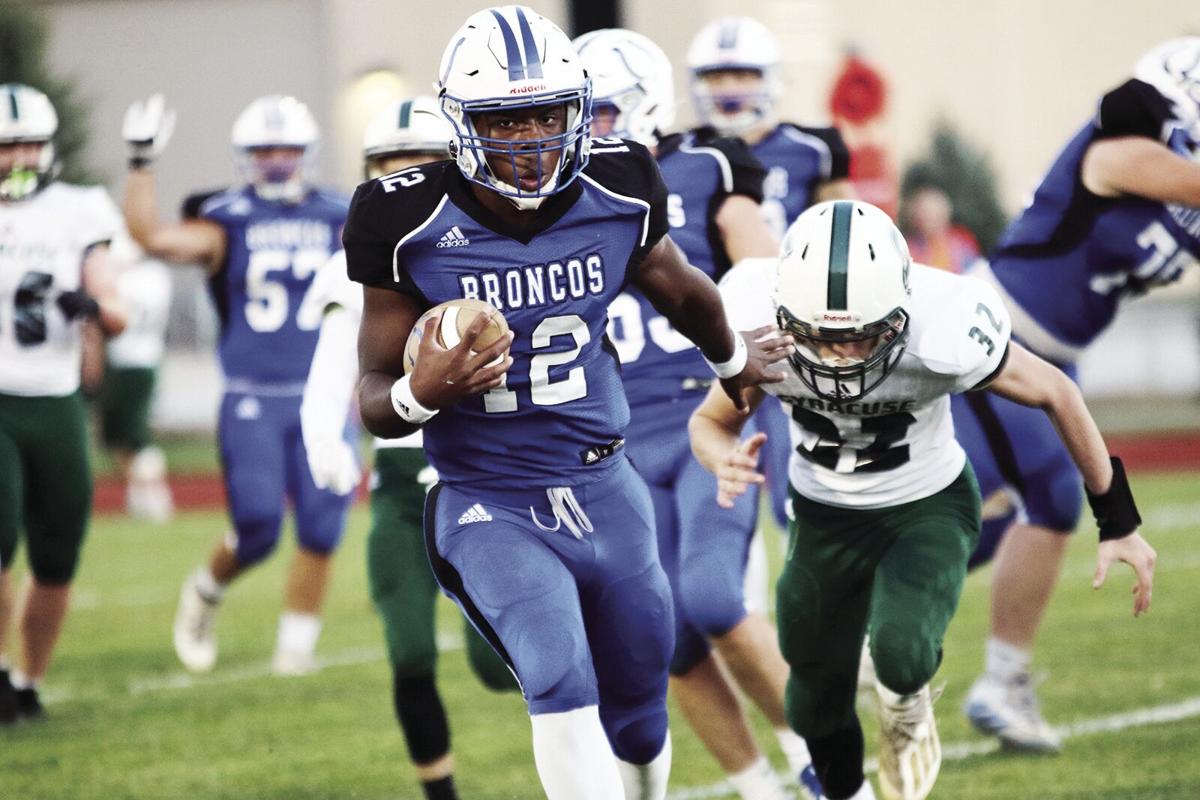 Centennial quarterback Maj Nisly (12) stiff arms the tackle attempt of Syracuse’s Tyler Sears (32) on his way into the end zone for a 13-yard touchdown run to open the scoring Friday night. Nisly also unofficially completed four of 11 passes for 172 yards and a pair of touchdowns as the Broncos opened a 28-0 lead at the break. (News-Times/Christian Horn) 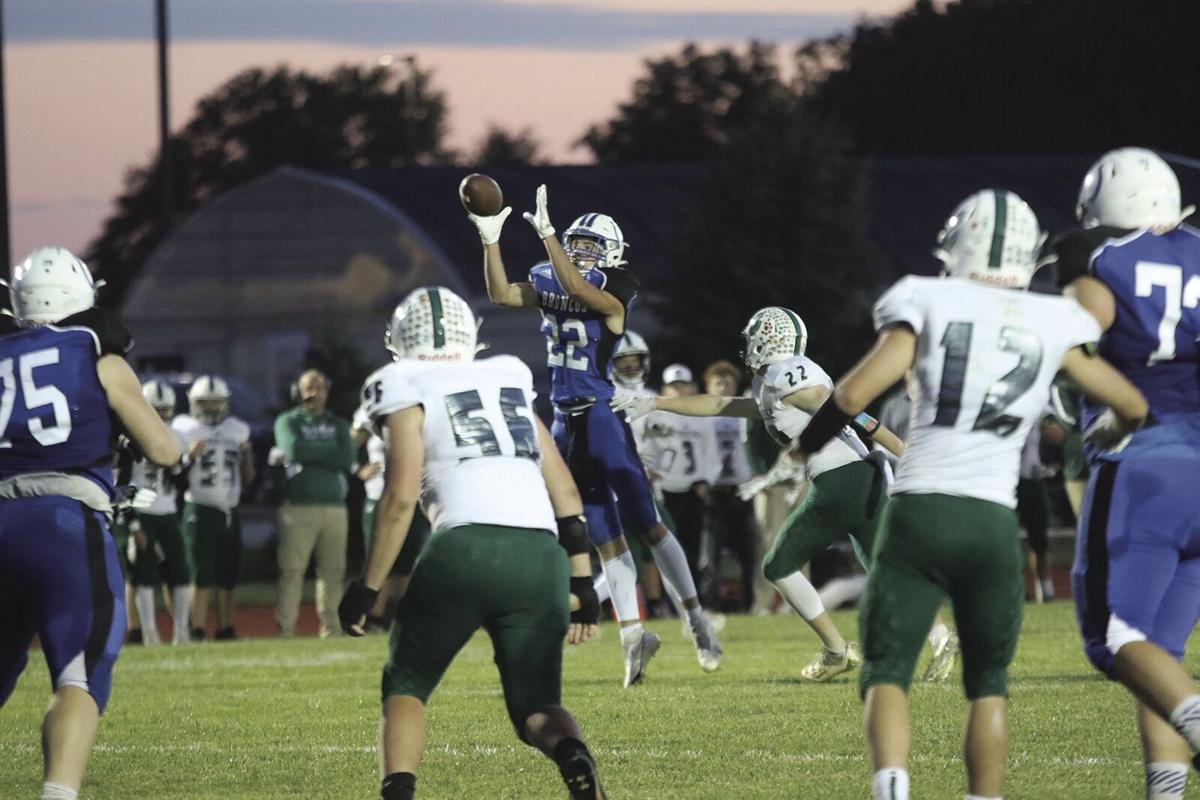 UTICA – The Centennial Broncos started off slowly out of the gates against the winless Syracuse Rockets on Friday night, as the offense stalled on its first two possessions. However, the defense stymied Syracuse offensively during the first half and the Broncos offense eventually roared to life. Centennial scored on four straight possessions near the end of the first half to take a 28-0 halftime lead en route to a

While the Centennial offense started sluggishly, the defense forced a Syracuse punt on its first drive. Senior Lance Haberman then ended the second Rockets possession with a fourth-down interception.

From there, the offense woke up, methodically moving down the field. Centennial quarterback Maj Nisly capitalized on the turnover with a 13-yard touchdown scamper to put the Broncos on the board with 33 seconds left in the opening quarter.

The Broncos ended the drive in the end zone when Maj Nisly connected with Mike Nisly on a screen pass the senior took 31 yards to the end zone for a 14-0 lead with 7:48 remaining in the first half.

Centennial stopped Syracuse quickly on its next possession, and a 50-yard pass from Nisly to senior wideout Jake Bargen converted a 3rd-and-20 and put the Broncos in business. Mike Nisly capitalized, plunging into the end zone on an eight-yard rush as Centennial extended its lead to 21-0 with 4:22 left until halftime.

The Rockets went three-and-out on their next possession, and the Broncos needed one play to extend their lead. Nisly found Bargen in stride, and the senior broke loose for a 55-yard touchdown catch.

Centennial forced a stop and got the ball back with under a minute left in the half but couldn’t score as the Broncos took a 28-0 lead into the locker room.

Syracuse managed nothing offensively to open the second half, while Centennial continued its hot finish to the first half on its opening drive of the third quarter. A 34-yard Maj Nisly run converted a third down and set Centennial up with a first-and-goal. Mike Nisly capped the possession with a one-yard plunge, his second rushing touchdown and third total score of the day.

Both teams sent in their second strings on the next possession as the Rockets moved the ball down the field and finally found the end zone on a short rush with 3:45 remaining in the third quarter.

Centennial’s backup offense didn’t score on the next possession, and the Syracuse offense drove down the field and punched the ball into the end zone on a 27-yard Cy Petersen rush. The Rockets couldn’t come up with the two-point conversion, however, as the Broncos led 35-12 with 10:17 remaining.

The Broncos recovered Syracuse’s onside-kick attempt and moved the ball downfield on the legs of sophomore Jarrett Dodson. Dodson carried the ball on each of the possession’s seven plays, capping the drive with a one-yard touchdown rush to extend the Centennial lead to 42-12 with 6:23 to play.

Centennial turned Syracuse over on its next possession, and the Broncos chewed out the rest of the clock to salt away a 42-12 win.

Maj Nisly unofficially completed four of 11 passes for 172 yards with a pair of touchdowns for Centennial and added a rushing score on a 13-yard scamper. Mike Nisly led the Broncos’ rushing attack, unofficially racking up 142 yards and two touchdowns on 16 carries; the senior also caught one pass for 31 yards and a score. Dodson unofficially added another 75 yards and a touchdown rushing on 12 carries.

Defensively, the Broncos forced a pair of Syracuse turnovers on interceptions from Haberman and Hartshorn.

Centennial improved to 4-1 on the year, while the Rockets remain winless. The Broncos hit the road next week to take on Wahoo Neumann.

CRC volleyball tourney off and running for 2021

Centennial quarterback Maj Nisly (12) stiff arms the tackle attempt of Syracuse’s Tyler Sears (32) on his way into the end zone for a 13-yard touchdown run to open the scoring Friday night. Nisly also unofficially completed four of 11 passes for 172 yards and a pair of touchdowns as the Broncos opened a 28-0 lead at the break. (News-Times/Christian Horn)