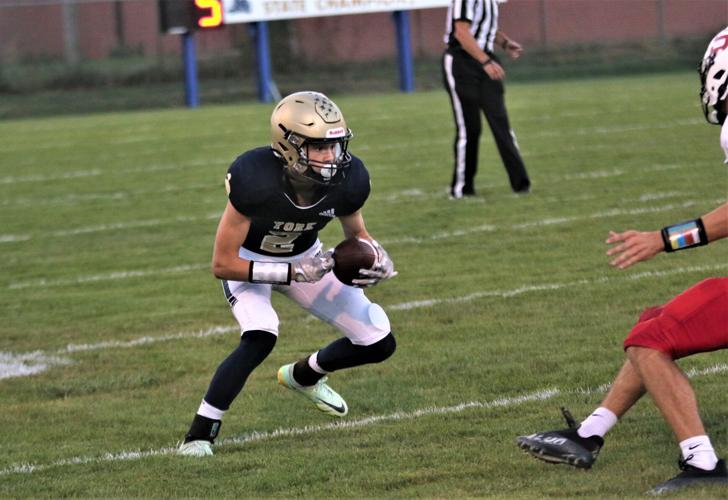 The Dukes’ receivers finding ways to win one-on-one battles against the Waverly secondary will be a key matchup to watch Friday night. Here, Garrett Ivey (2) cuts upfield after making a catch against Scottsbluff last Friday. The senior finished with six catches for 128 yards and a TD in the loss. 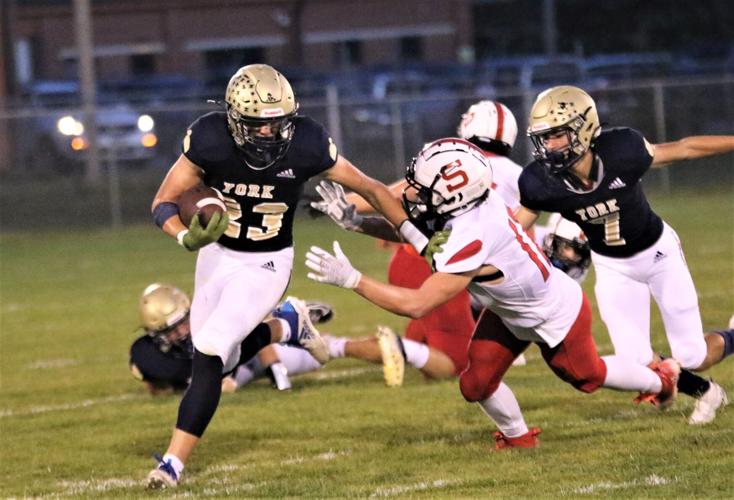 Seth Erickson (23) breaks off a lengthy touchdown run late in the first half against Scottsbluff, but the play was called back on a penalty — a key moment in an eventual 20-17 loss. If York wants to flip the script and upset Waverly on Friday night, it will need to find a way to win one or two more “money downs” in big moments, according to head coach Glen Snodgrass.

YORK – Last Friday, the York Dukes gave Scottsbluff everything it could handle for a full four quarters before their spirited upset bid came up just short in a 20-17 loss to the Bearcats, who were ranked No. 2 in Class B in the Journal Star and fifth in the World-Herald.

“I was really happy with the way we battled with those guys for four quarters,” head coach Glen Snodgrass said. “That’s a big, strong, physical team, and I felt like we just didn’t quite get that stop at the end of the game but our guys were right there and they didn’t back down one bit. We did the same type of things we’ve done all year in that we didn’t make a ton of mistakes, didn’t turn the ball over, didn’t have a ton of penalties. All those things were good, but we’ve still got to improve and get even better at some of the things we’ve done well so far this year.”

The schedule doesn’t ease up this week as the Dukes prepare to hit the road for a matchup at Waverly. The Vikings (3-1) are ranked fifth in Class B in both major Nebraska newspapers.

York carries a 2-2 record into Friday’s game, but that mark is a little deceiving as the Dukes are in the midst of a very difficult schedule. The Waverly contest caps a three-week stretch featuring road trips to Class B No. 1 Bennington and the Vikings, with the home game against Scottsbluff sandwiched in between.

Snodgrass said he was pleased with the way the Dukes played Friday in the loss to the Bearcats but acknowledged the kids were disappointed to come up a little bit short in the end. That, he said, has translated to a great week of practice.

“There’s been some unexpected things like the NSAA has given us some new guidance on heat and Tuesday was a little too hot to practice after school, so we had a 5:30 a.m. practice and every kid was there,” he said. “They were there early and we had a fantastic practice down at the game field at 5:30 in the morning. Wednesday there’s a lot of rain, so we’re probably going to practice inside. I tell the guys one of the things a good team does is they’re able to adapt, able to improvise when things are thrown their way and continue marching on the way they have been.”

Like the two previous weeks, Friday presents another measuring-stick opportunity for York to test its mettle against the cream of the crop in Class B. Waverly dropped its season opener against Elkhorn 21-17 but has rattled off three straight wins, the latter two coming by a combined 72-0 margin against Mount Michael and Norris.

“It’s an old Crete type of a defense; their head coach is from Crete, so they’re going to put a bunch of guys at the line of scrimmage, they’re going to fly upfield, they’re going to put guys one-on-one and dare you to throw the ball against them,” he said. “It’s going to be very similar, and I felt like we handled it pretty well a week ago. These guys are not quite as big as Scottsbluff but I’d say they’re faster and even more aggressive than Scottsbluff was defensively.”

Offensively, however, Waverly will pose a different threat than the Bearcats. Snodgrass said the Vikings are more balanced in the run and passing game, and while their line is not quite as beefy as Scottsbluff, they’ve got more team speed overall.

“It’s going to be another tough game against a very good team, one of the best for sure in Nebraska,” the Dukes’ head coach said. “I think we match up well and I think it’s going to be a good one.”

When looking at the film, Snodgrass pinpointed a couple specific schematic matchups that could prove crucial to York’s upset chances Friday night. One of them will come in York’s passing game going up against a speedy Waverly secondary.

“I think we’ve got some real good receivers on both sides and we’ve got multiple of them, but they’ve got some really good and fast defensive backs covering them,” he said. “It’s going to be straight one-on-one, they’re not going to have help behind them so if we can win some of those one-on-one matchups on the outside it’s obviously huge.”

The other key matchup comes in the trenches, where the Dukes will need their big offensive line to handle the Vikings’ defensive aggression and penetration up front.

“They’ll put a 150-pound nose tackle out there and just shoot gaps, a little quick kid that can just run,” Snodgrass said. “If our big guys can contain that penetration from their defense it’s going to be a big one. They’re similar to Scottsbluff in what they do, but they are faster. If we can stop them from penetrating and controlling our gaps, I think we should be able to move the ball.”

Also important for York will be finding an ability to take the next step and finish off a game against a high-quality opponent. The Dukes lost 33-10 at Bennington, but they trailed just 7-3 at halftime and are the only team to stay within 30 points of the defending state champs through the first month of the season.

Last week, York had the opportunity to get a stop late and give its offense a chance at a game-winning drive but twice failed to stop Scottsbluff on fourth down. It also wasted a scoring opportunity on the final drive of the first half, first having a lengthy touchdown run called back before ultimately missing a field goal just before halftime.

The Dukes have hung tough with stiff competition so far, but pulling out a win against an elite opponent will require finding another gear.

“I don’t fault the boys for anything they did last week, but if we want to take the next step and get the job done against a big-time team, that’s just what we’ve got to do,” the head coach continued. “It’s been a while since we’ve won a big game against a rated team, and we’ve been so stinking close it just kind of feels like hopefully it might be our time, but those things don’t happen easy. You don’t get those big wins against top-5 teams easy, so we’ve got to make some of those big plays go our way, maybe just one or two more, and that could be enough to get the script flipped.”

Behind the on-field smiles and highlights, Maurice Purify was a young man who didn’t know how to grieve. Those moments in helmets and pads were his only sanctuaries from the weight of life.

There's a big game Friday night. But ratings and districts, in the grand scheme of things, won't mean all that much to two of York's key figures.

A bye week and new defensive coordinator under an interim coach have produced a few changes to the depth chart for Nebraska.

The top-4 teams in the college volleyball rankings stayed the same after those teams all kept winning last week.

Vikings pull away from Dukes in second half

WAVERLY – For two and three-fourths quarters, the York Dukes remained within shouting distance of the host Waverly Vikings on Friday night.

Many coaches have spoken out about Nebraska's coaching vacancy recently. Here's what they've had to say, and how it impacts their Huskers' "heat level."

Cross County wins the battle of the Cougars in three sets

STROMSBURG – Cross County and Central Valley squared off Thursday night with team name bragging rights on the line. Behind a balanced offensiv…

Mustangs, Broncos and Panthers all compete at UNK

The Dukes’ receivers finding ways to win one-on-one battles against the Waverly secondary will be a key matchup to watch Friday night. Here, Garrett Ivey (2) cuts upfield after making a catch against Scottsbluff last Friday. The senior finished with six catches for 128 yards and a TD in the loss.

Seth Erickson (23) breaks off a lengthy touchdown run late in the first half against Scottsbluff, but the play was called back on a penalty — a key moment in an eventual 20-17 loss. If York wants to flip the script and upset Waverly on Friday night, it will need to find a way to win one or two more “money downs” in big moments, according to head coach Glen Snodgrass.