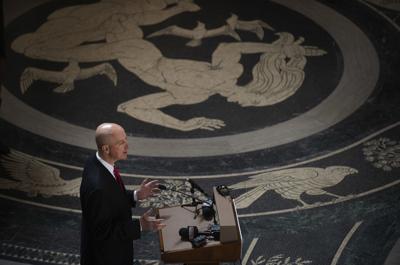 Political observers have noticed a change in Gov. Pete Ricketts, who has ramped up his public criticism of policy changes coming out of Washington in recent months.

In his weekly columns, press statements and public appearances, the Republican has taken President Joe Biden to task for the chaotic exit from Afghanistan, “trampling” on gun rights, canceling the Keystone XL pipeline and rescinding a prohibition on using U.S. foreign aid for abortion.

That’s above and beyond crisscrossing the state for multiple rallies he organized to condemn Biden’s proposed 30-by-30 conservation goals.

The last time a Democrat occupied the White House, the governor was critical, but his darts against President Barack Obama came in trickles, not torrents.

It all leads many to ask: What’s Ricketts up to?

Why is a blue-ribbon lineup of top GOP presidential prospects — former Vice President Mike Pence, Florida Gov. Ron DeSantis and Sen. Ted Cruz of Texas — coming to Ricketts’ annual steak fry on Sept. 12? Is he running for something, maybe even president? Or just applying for a post in some future Republican administration?

Ricketts and some of his key supporters swatted down the presidential talk like so many flies in a feedlot, saying there are just a lot of things to criticize coming out of Washington these days.

“I’ve got a lot more to be critical about with this administration than the last one,” Ricketts said last week.

When asked whether he is positioning himself for a run at the White House or a Cabinet post by weighing in on more federal issues, the 57-year-old millionaire said what he’s been saying for months — he’s working only on being “the best governor I can be” for the remaining 16 months of his second term.

His main political consultant for the past 15 years, Jessica Flanagain, said it would be one thing if Ricketts were traipsing across Iowa and New Hampshire shaking hands in coffee shops and flipping pancakes at GOP events. But he’s doing something quite different: attending events here and lambasting federal policies that affect Nebraska.

“He’s not politically calculating. He’s not using one office to get to another,” Flanagain said. “When he says he’s focusing on finishing up the job he was elected to do, that’s what he’s going to do.”

Other political observers see a method to Ricketts’ madness about Biden’s policies. They see some calculation in the political hits and see the invitation of three GOP heavy hitters to his steak fry as a clear indication that he is looking toward his political future after he leaves office in January 2023 because of term limits.

“Most of the steps he’s taken have been in that direction,” said Democrat Paul Landow, a retired University of Nebraska at Omaha political science instructor. “Anything he does, like criticizing Biden, what’s the point of doing that unless he sees it as a way to ingratiate himself to national Republicans? He certainly doesn’t want his political career to end at the end of his second term as governor.”

Perre Neilan, a political consultant and lobbyist based in Lincoln, put it this way: “The old saying was always that U.S. senators wake up in the morning and see a presidential candidate in the mirror. I would say that applies to governors now, too, perhaps for Pete Ricketts.”

Several observers interviewed said it’s a rare politician who doesn’t think about their next move or next office. Plus, there’s quite a tradition in Nebraska of former governors moving on to federal positions, such as terms in the Senate by former Govs. Bob Kerrey, Ben Nelson and Mike Johanns, who also became U.S. secretary of agriculture.

Flanagain works for Kansas City-based Axiom Strategies, which ran Cruz’s 2016 presidential campaign, and those kinds of multimillion-dollar campaigns are what pay the bills at such firms.

Ricketts served as chairman of the Republican Governors Association in 2019, and was recently picked to co-chair that group in 2022, which gives him a national platform.

That shows a level of trust nationally within the party, said Kyle Kondik, managing editor of Sabato’s Crystal Ball, which handicaps political races. The Ricketts family has national political “cachet,” he said.

Ricketts, who reported his wealth at $45 million to $50 million when he ran unsuccessfully for Senate in 2006, has the personal money to aid a campaign. His family, which founded TD Ameritrade and now owns the Chicago Cubs, is among the top contributors to conservative causes in the country. And his brother Todd has served as the finance chairman of the Republican National Committee.

The personal and family money would be an asset to any candidate, or to a candidacy by Ricketts.

But John Hibbing, a political science professor at the University of Nebraska-Lincoln, said the big question would be how Ricketts would differentiate himself from other Republican governors who are also tossing darts at Democratic policies.

There’s no doubt, Hibbing said, that Ricketts has become more aggressive in his criticism of Biden, but so have other GOP governors, including neighbors Kristi Noem in South Dakota and Kim Reynolds in Iowa. Several governors are said to be potential presidential candidates, including DeSantis and Greg Abbott of Texas, along with Pence, who is a former governor of Indiana.

“It’s going to be a crowded field with people saying the same thing,” Hibbing said. “It’s paint by the numbers to appeal to the same kinds of people that (former President Donald) Trump appealed to.”

To be sure, long lists of potential Republican candidates do not name Ricketts. Noem is near the top, with Sen. Ben Sasse of Nebraska near the middle of those mentioned. And there’s no indication that Ricketts is raising money for some kind of campaign.

Ricketts could run for Senate again (he lost to Nelson in 2006) or, with his background in investing and focus on economic growth, could be a candidate for secretary of commerce. Brother Todd was nominated by Trump for deputy commerce secretary but withdrew his name, citing the potential appearance of a conflict of interest with his investments and those of his family. Pete Ricketts has said he might have the same entanglements.

Jane Kleeb, chair of the Nebraska Democratic Party, said Ricketts’ criticisms of Biden are part of a national strategy to block everything the commander in chief proposes. It might also be a way, she said, to fire up rural Republicans for Jim Pillen, the University of Nebraska regent who is running to replace Ricketts. Pillen has shared the stage with the current governor at some of his 30-by-30 rallies.

But former Gov. Kay Orr said that Ricketts knows the views of Nebraskans and that he is speaking for them when he criticizes “heavy-handed” policies coming out of Washington.

“We need good people to stay in government,” she said.

Ricketts loves politics, several people said, and could remain involved in politics in ways other than serving in office. He co-founded the Platte Institute, a free-market think tank based in Omaha, and he was also involved with the anti-gambling group Gambling With the Good Life.

Orr, who turned down offers to run for the Senate, questioned why anyone would aspire to go there.

“I wouldn’t go there if you carried me,” she said, adding that she did not know what Ricketts’ plans might be.

Tom Ricketts, the brother who runs the Chicago Cubs, said Pete has reduced the rate of state spending in his 6½ years in office and kept Nebraska’s unemployment at the lowest rate in the country.

“He has big potential to utilize his experience and have a national or international impact with it,” he said. “Whatever he decides to do next, I know his focus will be improving the lives of all Nebraskans.”

As for the upcoming barbecue with the three potential GOP presidential contenders, views were split on whether it was a way for Pence, DeSantis and Cruz to “kiss the ring” of a member of an influential Republican family; a chance for Ricketts to pitch himself for a Cabinet job; or a way to share the spotlight, and stay connected, with some of the party’s top stars. The steak fry is being held in Nebraska City, just across the Missouri River from Iowa, the site of the first political test in the 2024 presidential race.

Ricketts said it’s none of those things, just a continuation of an annual barbecue that has hosted other GOP biggies, including Abbott and Sarah Huckabee Sanders, Trump’s former press secretary. As for future political aspirations, Ricketts said he’s not thinking about that now.

“I’m going to worry about that when I’m done being governor,” he said.

Poll: What do you think Gov. Pete Ricketts will do next?

Study: Earth tipped over when its magnetic poles wandered millions of years ago

Case counts down, Hawaii to welcome back tourists

Case counts down, Hawaii to welcome back tourists

Rep. Jeff Fortenberry expects to be indicted for lying to FBI but says charge is false

A source said an indictment could come down as early as Tuesday. The nine-term Republican from Lincoln said he is being wrongly accused. “We will fight these charges. I did not lie to them,” he said.

"Land justice happened only because of the hard work of citizens, grassroots organizing, and a legal team who believed the land was worth protecting,” Keystone XL opponent Jane Kleeb said.

The Nebraska Power Review Board's proposal has created a firestorm of concern  among public power utilities and some environmental groups. The proposal would give the review board final say over contracts with energy suppliers.

“We sat in those helicopters for quite a few hours. It was cold. We heard every Joe Biden story he’d ever told in his life,” Chuck Hagel said. The interpreter who helped the senators escape made it out of Afghanistan earlier this month.

Vaccination should be voluntary, the governor said in response to reports that he would call a special session to consider a ban on vaccine mandates. "I don't believe we have the votes to pass such a bill," Ricketts said.

Safi Rauf, who immigrated from a refugee camp in Pakistan in 2010, formed a Nebraska corporation, “Human First,” to aid efforts in evacuating those trapped in Afghanistan. So far, Human First has helped evacuate 6,700 people.

J.L. Spray, a Lincoln attorney and GOP national committeeman, said that such allegations would be "very out of character" for Rep. Jeff Fortenberry, who has represented Nebraska's 1st Congressional District since 2005.

"Truly one of the most decent and talented human beings I ever knew," former Sen. and Secretary of Defense Chuck Hagel said.  "He was a good friend … and he will be missed."

After career-best game, Austin Allen trending toward one of best TE seasons in recent Husker history (and maybe ever) 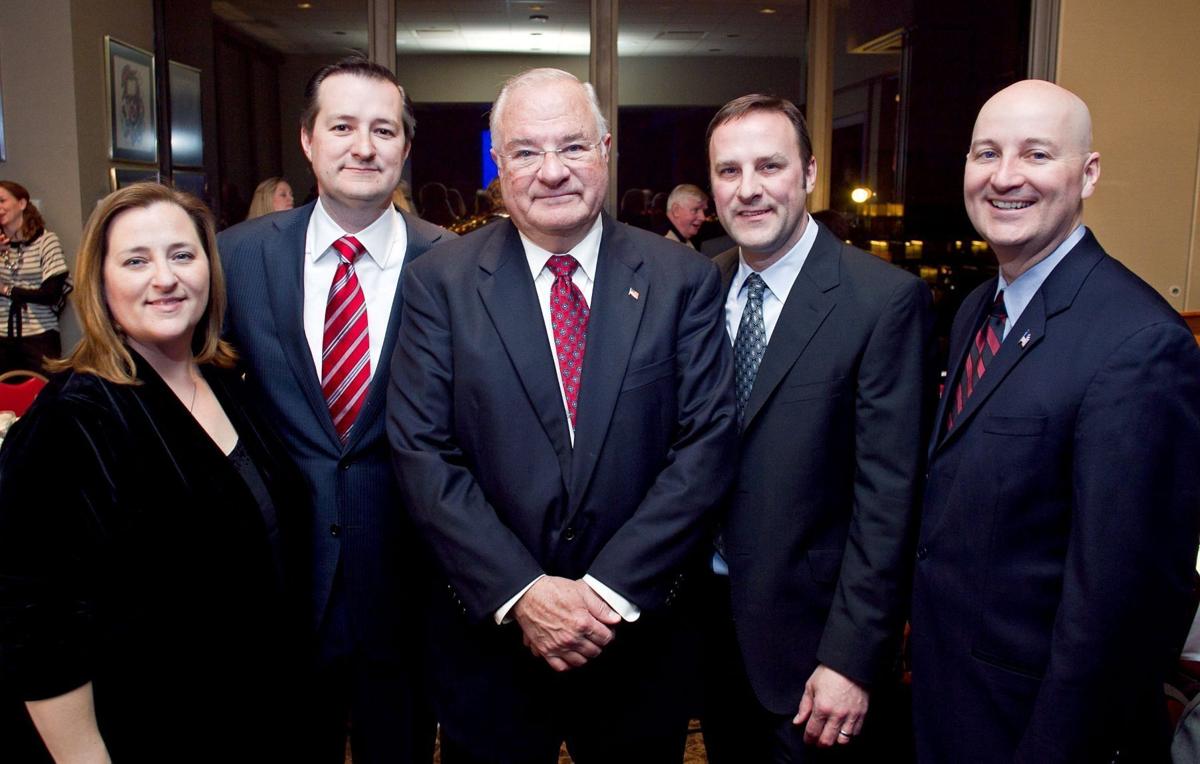 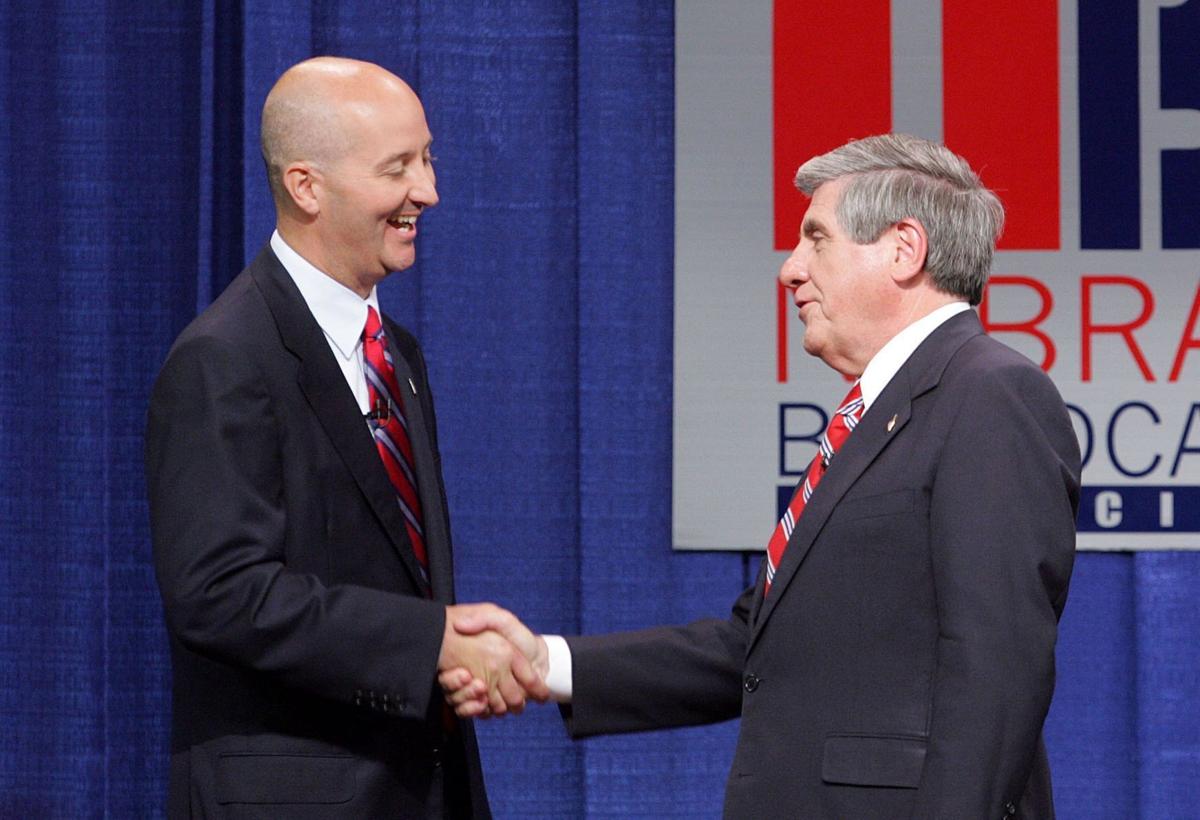 Pete Ricketts, left, and then-U.S. Sen. Ben Nelson shake hands after a debate in 2006. Nelson is among several former Nebraska governors who went on to national office after serving in Lincoln.