Seventeen employees of Nebraska’s prison system more than doubled the size of their paychecks during the past fiscal year.

How? They made more in overtime pay than they did in base salary, according to data the state recently provided the Flatwater Free Press.

Some 145 employees of the Nebraska Department of Correctional Services made at least half their base salary in overtime — part of spiraling overtime costs in the prison system that have cost taxpayers $48 million over the past three years.

The state’s highest overtime earner — a corrections caseworker named Donald Hiatt — made nearly double his salary in overtime between July 2020 and June 2021. He earned a base pay of $47,840, and an additional $97,400 in overtime pay.

The large individual overtime payments reflect an ongoing crisis faced by the state’s prisons, long overcrowded and now severely understaffed, according to state leaders and experts.

And while recent raises for prison staff offer some hope, Nebraska’s most understaffed prisons have seen little relief in reducing the need for overtime hours, said Scott Frakes, director of the Corrections Department.

In the short term, overtime will cost taxpayers even more: Before the recent raises, it cost 15% more to pay overtime than it did to hire a new employee. The raises — which also supercharge overtime pay — boost that difference to about 55%, Frakes said.

“It will always be more economical to find and hire and onboard new people,” Frakes said. “That’s been our emphasis all along, to reduce mandatory overtime to the bare minimum.”

Frakes confirmed that, for some corrections employees, an 80-hour week is not unusual.

“You’ve got to be on your toes, be alert,” said Mark Foxall, former director of the Douglas County Department of Corrections and now a faculty member at the University of Nebraska at Omaha. “Those things are challenging in an eight-hour shift, let alone a 16-hour shift. Are you as alert in hour 14 as you were in hour 1? How does that physical and mental fatigue accumulate over the course of several overtime shifts in a week?”

Six months after the initial records request, the state in January disclosed the overtime pay earned by all state employees during the 2021 fiscal year. The Flatwater Free Press has added that data to a searchable state salary database.

The state spent $35.7 million on overtime during that period. Nearly half, $15.4 million, went to employees of a single department, the state’s prisons system.

The top five highest overtime earners in the state were all Corrections employees. Out of the top 20 highest earners, 15 worked in Corrections.

The Flatwater Free Press reached out to 10 of the top overtime earners in Corrections. None returned emails seeking comment.

Those top earners, who often work up to 80 hours a week, are most likely volunteering for the majority of those shifts, Frakes said.

The union contract grants staff members the right to work overtime without an upper limit, and seniority determines who can claim voluntary overtime shifts.

“What we look for is performance, as opposed to straight hours,” Frakes said. “Are they able to perform at the level that we establish good performance? Are they staying awake and alert? If they're doing all those things, then there's no issue to address.”

Mandatory overtime shifts, on the other hand, are assigned in order of reverse seniority. Recently, Frakes said, some prison guards have often been required to stay four more hours after their regular 12-hour shift.

The state’s two maximum-security prisons, the Tecumseh State Correctional Institution and at the State Penitentiary in Lincoln, rely heavily on overtime shifts to fill mandatory posts.

Some Corrections staff like the overtime, said Michael Chipman, president of the Nebraska Fraternal Order of Police 88, the union representing Corrections officers and other security staff. But even an excessive amount of voluntary overtime still causes burnout, he said.

Nebraska correctional officers described a “continual sense of fatigue” and worried about the impact of overtime on their well-being, according to a 2021 report by Doug Koebernick, inspector general of the Nebraska Correctional System.

Former employees told the Flatwater Free Press that the long hours took them away from their families, and brought on panic attacks and sleep loss.

Rapid turnover continues to be an issue for Nebraska’s prison system. By the end of September, state Corrections had lost 330 prison guards over the course of 2021. The department projected that one out of every four prison employees would leave their job in 2021, according to its most recent quarterly report.

“Corrections is not the most glamorous job. It’s a challenging job,” said Foxall, discussing high turnover in American prisons. “Hiring problems predate the pandemic. The pandemic has exacerbated problems.”

The state hopes the recent raises announced for correctional officers will help recruit and retain staff, lowering the department’s reliance on overtime to stay afloat. Within six weeks of the change, the department saw 630 applications for corporal positions, compared with 162 applications the five weeks prior.

The department has hired about 140 of those applicants, Frakes said.

But the new union contract will drive up overtime expenses as well — in addition to increasing hourly salaries, the contract boosted overtime pay from time-and-a-half to double.

Since the raises went into effect, droves of Corrections employees have volunteered for overtime or holiday shifts, Koebernick said.

That 100 Nebraska prison employees made more than half their base salary in overtime last year is a testament to the level of need, said Eric Thompson, director of the Bureau of Business Research at the University of Nebraska-Lincoln. It signals that there’s a limited number of people qualified to do the essential — and often unpleasant — work of guarding  inmates and managing their cases.

Rampant overtime is far from ideal. But it’s also currently necessary, said Dustin White, an economics professor at the University of Nebraska at Omaha.

“In the short run, you just have to find people,” White said. “It’s essentially a bribe. You’re trying to figure out, how do I convince people to do this for now until I can figure out a better solution?”

Nebraska's 10 state prisons from least to most crowded

Watch now: Nobody injured in Amazon truck fire that forced Interstate 80 to close

An Amazon-branded semi trailer that had been westbound on Interstate 80 near Greenwood on Sunday caught fire, injuring no one but forcing the interstate to close for more than three hours.

The Broken Bow Police Department found Angie Miller dead at her house around 1:45 a.m. Friday, the State Patrol said. Her husband was found dead in a pasture a few hours later.

Boaters discovered the body in Ernst Lake Monday night, according to a news release.

Officers were called to investigate an assault. They were told a man had fallen to the ground and struck his head.

One person was killed and another was injured in an early Saturday morning crash near Wisner, and an Omaha man involved in the crash was arrested after he stole a first responder's vehicle at the scene.

Capt. Kathy Belcastro-Gonzalez had been on paid administrative leave since Jan. 19 because of an internal affairs investigation regarding alleged violations that have not been disclosed.

Terry Berry Jr.'s family blamed the state for the decision to place Berry, who was days away from a parole hearing, in a cell with an inmate serving a life sentence for murder.

A winning candidate in the May primary election was indicted for wire and bank fraud after allegedly misusing $202,000 in government grants for a nonprofit Omaha training facility.

A man has sued former Dodge County Attorney Oliver Glass, the county, the City of Fremont and others over his confinement in a mental-health unit following badgering phone calls and texts from Glass.

Pregame timing was off, but Ferrell and Wallace were on as Huskers open NCAA play with shutout win

Rent prices continue to soar across the United States

Rent prices continue to soar across the United States

Potentially hazardous asteroid to hurtle past Earth on May 27

Potentially hazardous asteroid to hurtle past Earth on May 27 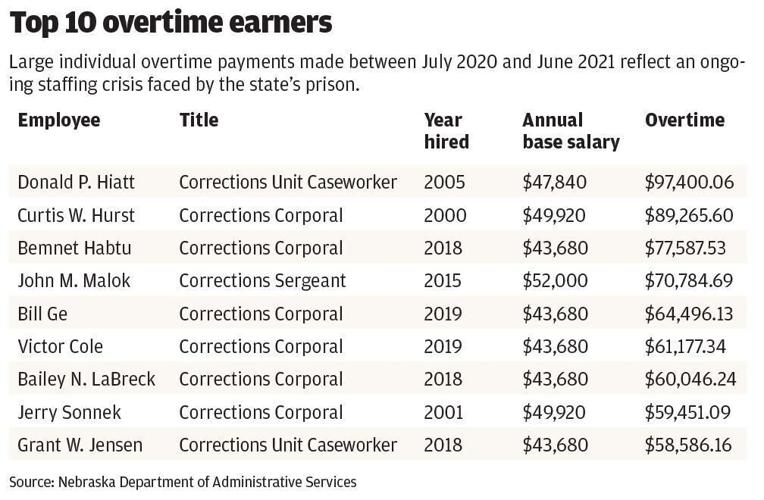 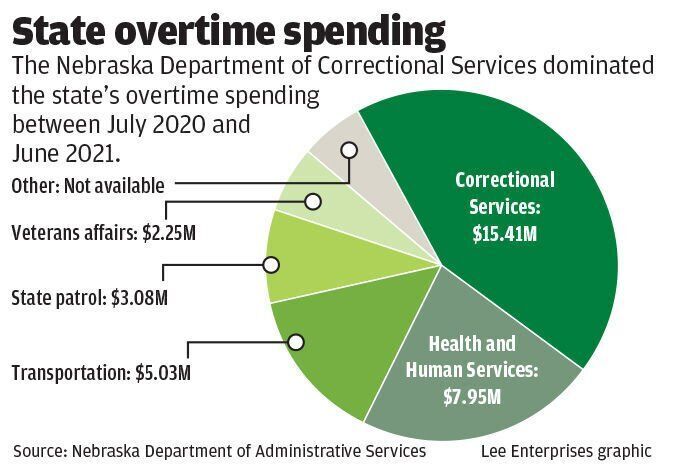 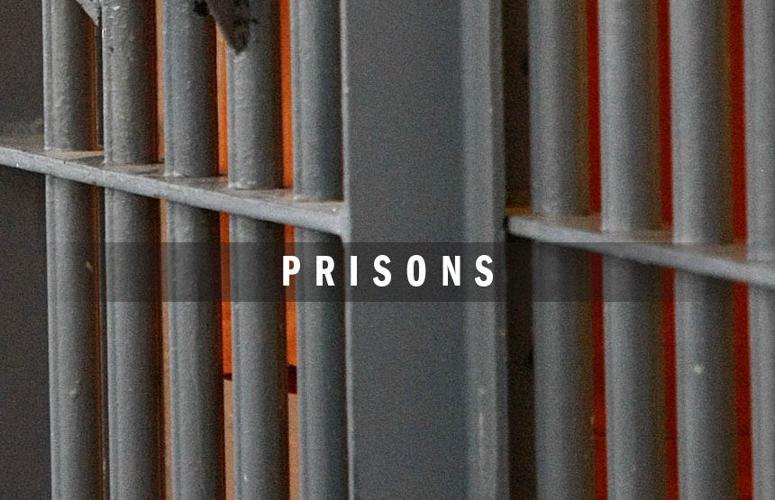