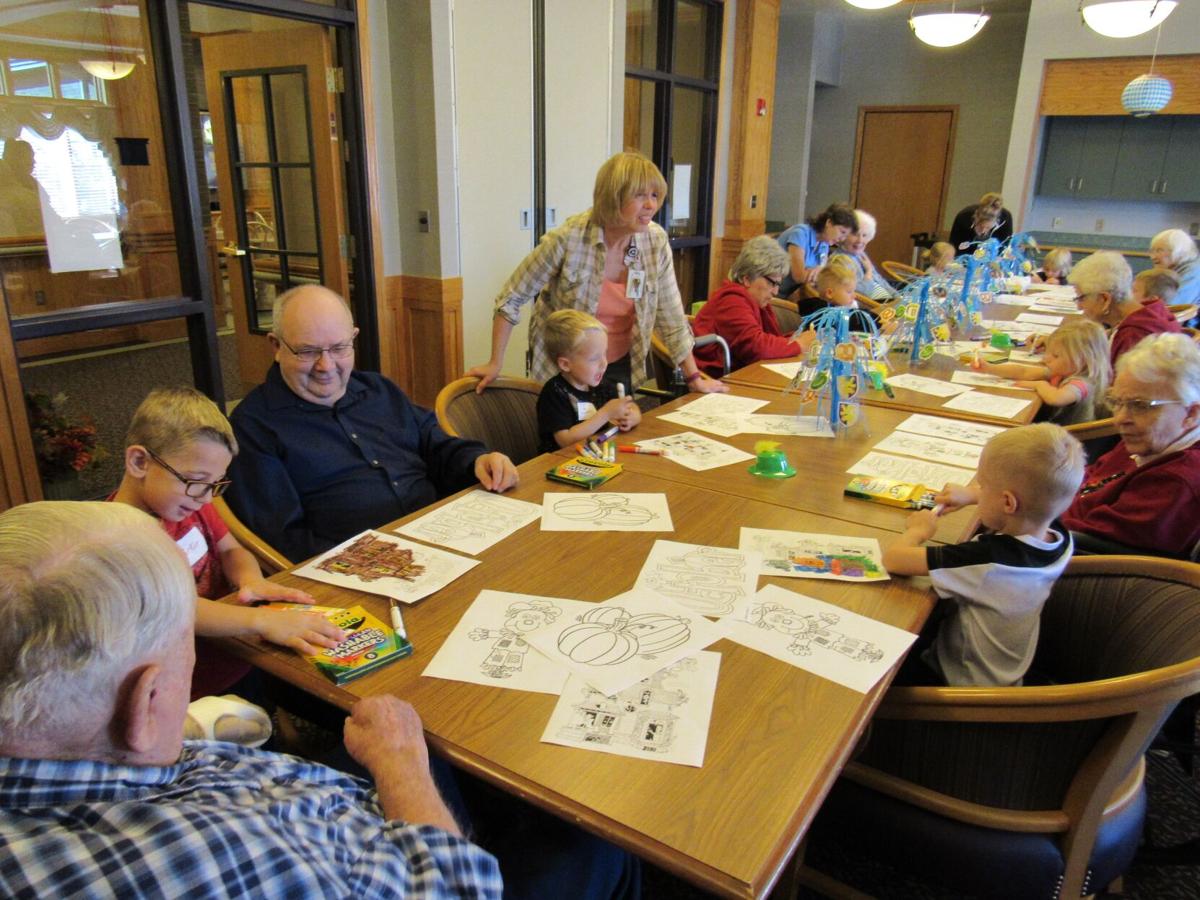 Hearthstone resident Lowell Anderson gets crafty with preschoolers. Anderson is always serving those around him, whether they be young or old. 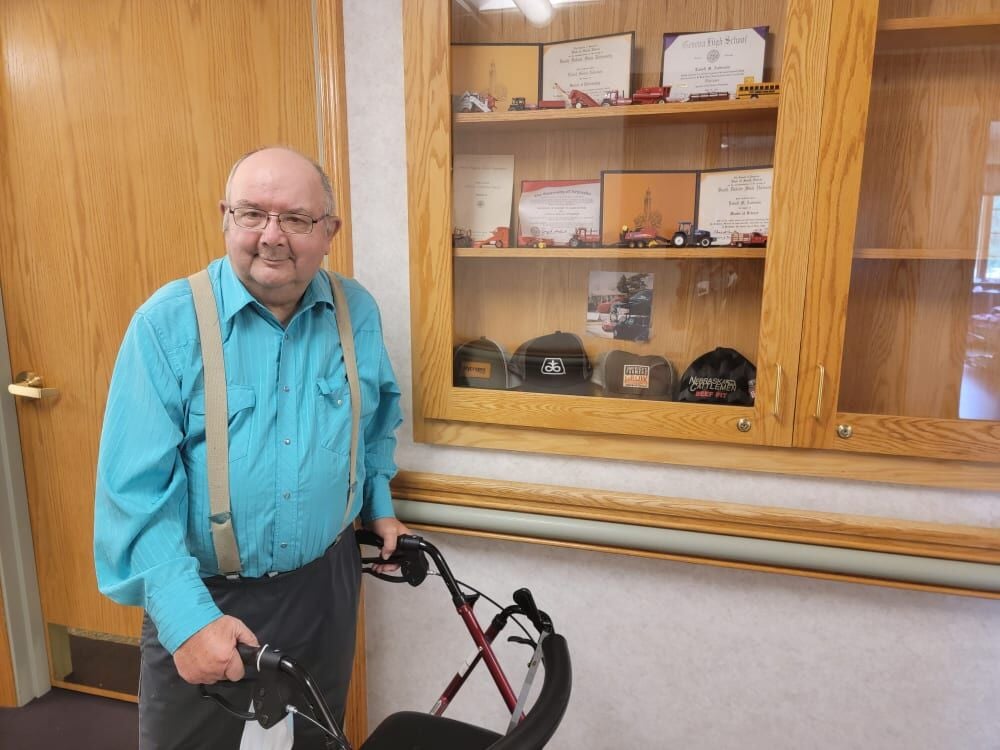 Hearthstone resident Lowell Anderson stands with the well-deserved awards and certificates he has received over the years. 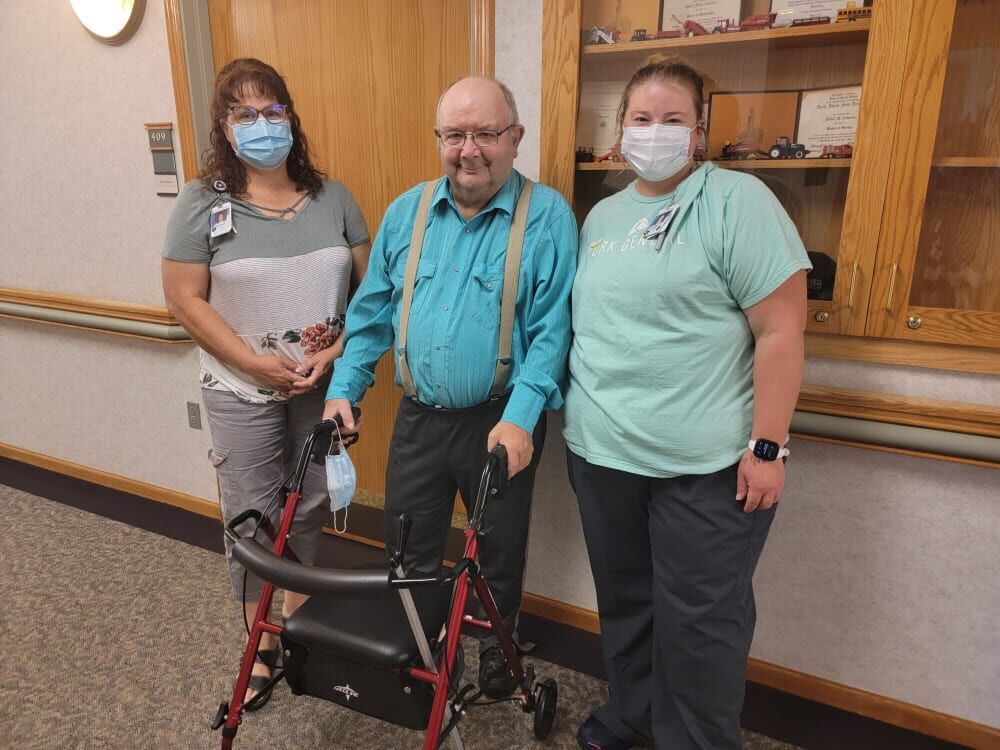 Hearthstone Social Work Director and nurse Morgan Ehlers gives a “thank you” to Hearthstone resident Lowell Anderson for serving as Hearthstone Residential Council President. Lowell is optimistic and is great at showing other residents around at Hearthstone.

YORK -- Hearthstone resident Lowell Anderson, 77, from Geneva, has been living life in the fast lane for many years and he’s not slowing down anytime soon.

Anderson’s leadership qualities were developed at a young age. He grew up on a family farm in the Geneva area with four brothers. His parents, Melvin and DeVee Anderson, instilled a hard work ethic in their family.

Anderson said, “We didn’t have time to go on vacations or do family activities besides go to the county and state fair. My father had a lot of dairy cattle to tend to which took away our vacation time.”

When he was not helping his father take care of cattle, Anderson was spending time with their family dog named Lassie.

Anderson was actively involved with 4-H and FFA during his attendance at Geneva High School. While in school, he was the FFA chapter leader and helped coach their livestock judging team. His favorite memory was receiving first place in their county’s livestock judging contest. Anderson also took his team to the National Western Stock Show held in Denver, Colorado. In the classroom, Anderson was studious and consistently made it on the honors list many times in middle school and high school.

For a couple of years, Anderson stayed in South Dakota to do cattle performance testing for cattle producers. He also processed farm and cattle records for the state.

“I was always good at picking up on math, statistics, and science. Being in charge of cattle records was something I was passionate about and it came easy,” he said.

In the year of 1961, Anderson’s two older brothers were called to serve in the Cuban Missile Crisis. “I remember having to come home and take care of the family farm being the middle child. It was a scary moment for me and my family, but I had to remain calm and step in and do what was needed on the farm.”

Anderson took over the family farm operation and farmed for over 40 years.

As Anderson reflected on sweet memories on the farm, he said the many years of hard work paid off.

Anderson said, “My biggest life advice is to work hard and if you’re going to do something right, do it right the first time.”

Even though Anderson is onto a new chapter in life as a resident at the Hearthstone, Anderson still lives by his life philosophy of working hard and serving others.

Hearthstone Social Work Director Dawana Bolton said, “Anderson is a great welcomer for all new residents coming in. He is a positive asset to Hearthstone and has a lot to offer by serving as Residential Council President.”

Anderson is known to be optimistic and fun to be around. Other residents would describe him as a kind and respectful neighbor anyone can count on.

A pastime of his is playing cards with other residents.

Anderson does not just live the change life has set before him, but he embraces the change and is always looking towards turning the page of his life story.

Hearthstone resident Lowell Anderson gets crafty with preschoolers. Anderson is always serving those around him, whether they be young or old.

Hearthstone resident Lowell Anderson stands with the well-deserved awards and certificates he has received over the years.

Hearthstone Social Work Director and nurse Morgan Ehlers gives a “thank you” to Hearthstone resident Lowell Anderson for serving as Hearthstone Residential Council President. Lowell is optimistic and is great at showing other residents around at Hearthstone.