US virus deaths top 3,100 in single day for first time; ex-presidents vow to get vaccine publicly 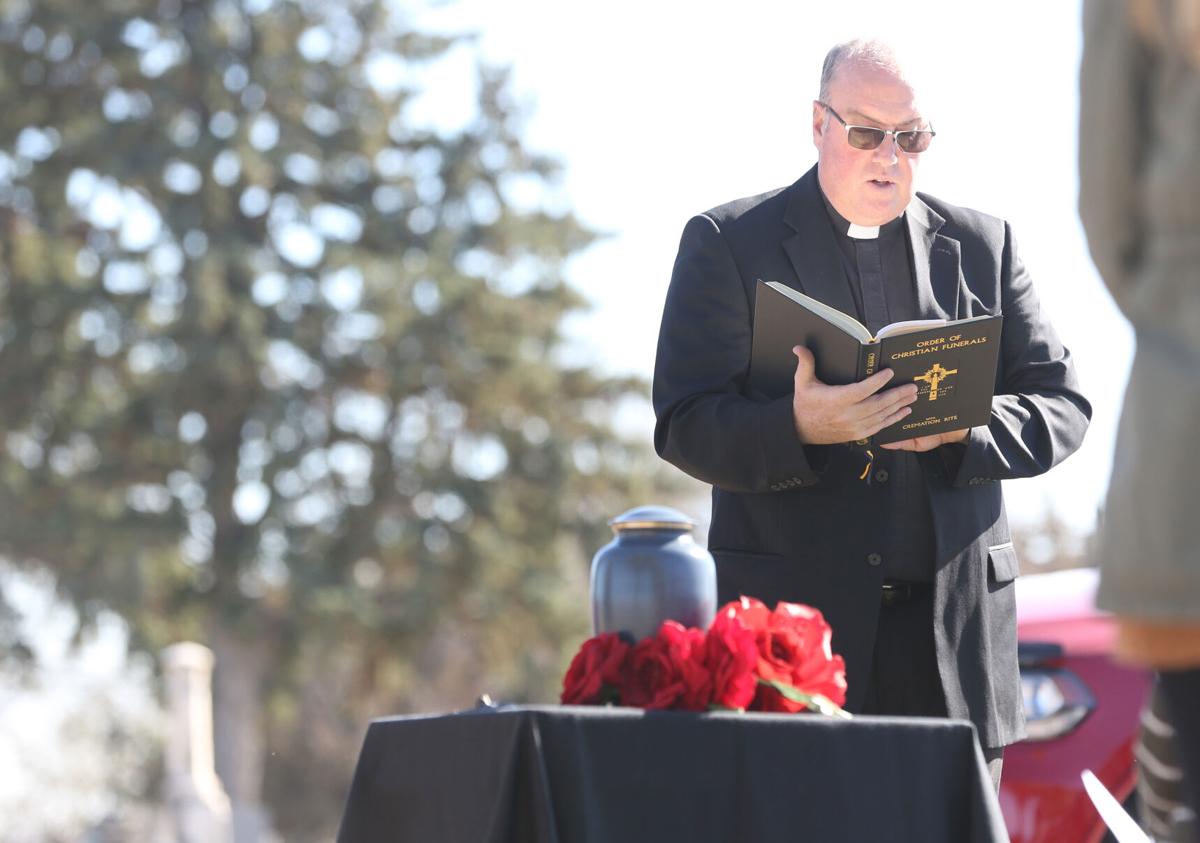 Father John Sullivan of St. Joseph Catholic Church presides over the funeral of Ruth Virginia Brown – a woman with no ties to York except a cardboard box left at Blue Valley Community Action and friends she never knew she had. 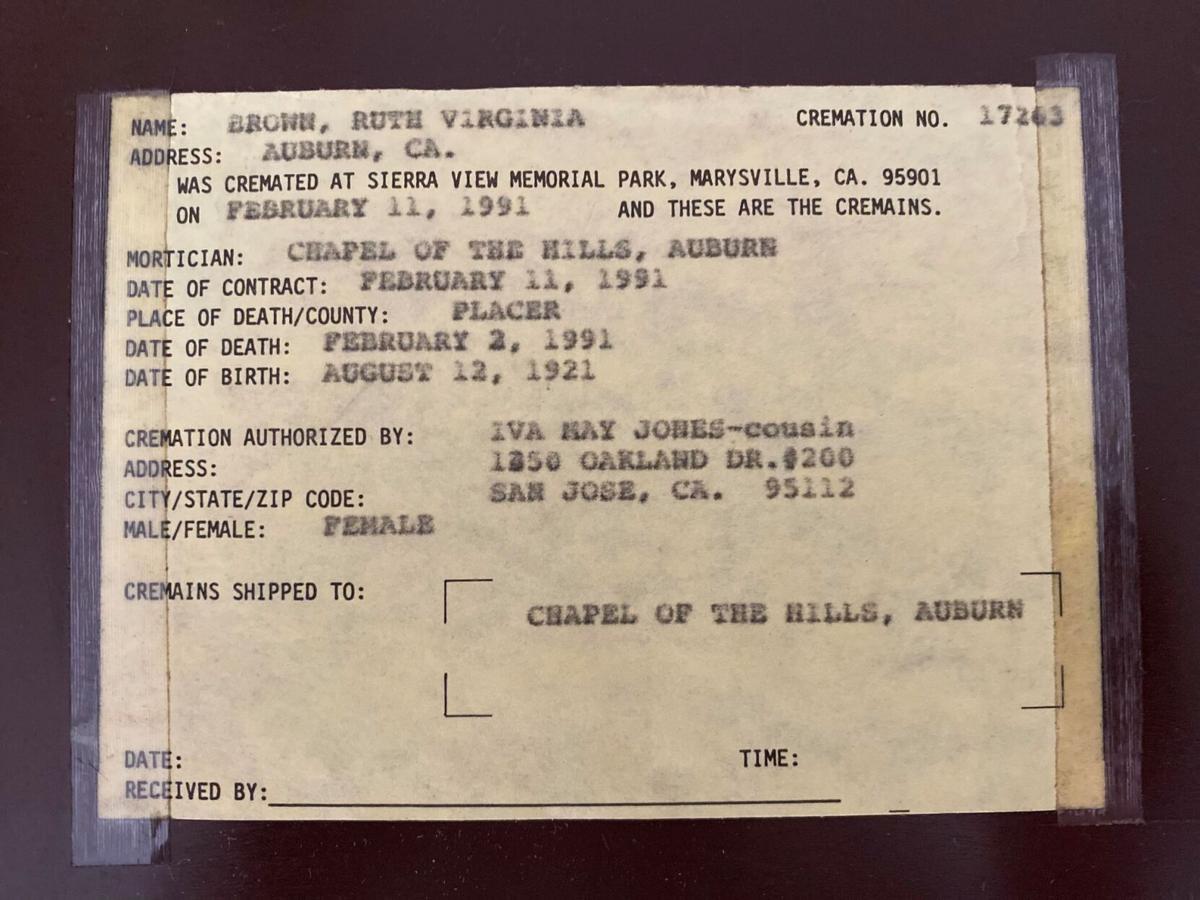 The label of Ruth Virginia Brown’s cremains container is rather impersonal, unlike the wayward package’s treatment by those who discovered her – at least what they could. 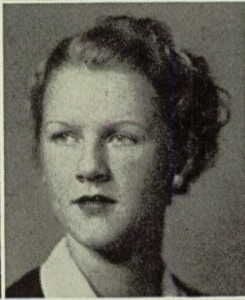 Ruth Virginia Brown, shown here in a yearbook photo, remains a mystery to those who have cared for her cremains, randomly left at BVCA-York.

A worn cardboard box housing a smaller brown plastic container took Number 17263 to its destination. At least that was the intent.

November 18, 2019, 17263’s earthly journey came to rest in York, when Blue Valley Community Action of York volunteer Terry King picked the box off of the nonprofit’s donation drop-off table. “People tend to drop stuff off in the middle on the night,” he said. The box had very little writing on it, but looked like it had been mailed – from Sierra View Memorial Park to Chapel of the Hills, Auburn, Calif.

“I opened up the cardboard box and looked,” King said. “I thought, ‘This can’t be what it says it is.’” He carefully took the box from the drop-off table and into the office of BVCA-York Director Elizabeth King. “It was just like, ‘what do we do now?’” Terry King said.

The police department was called. Metz Mortuary was called. Nothing seemed to be illegal about the situation, and Metz confirmed that the packaging wasn’t too unusual – just where the package ended up.

Carolyn Sandall and Larry Kopsa led the charge to find out who Ruth Virginia Brown was, and where she needed to be. The armchair genealogists searched, as Ruth’s cremains rested in Elizabeth King’s office surrounded by flowers, a delicately-crocheted doily and plenty of unanswered questions.

Kopsa started with Google (of course), then decided to join a genealogy research website for a month. “There is so much information on the internet,” Kopsa said. “Everything is out there. I found a lot of ‘Ruth Browns,’ but they didn’t match.” Kopsa said as he scoured the internet, he had a specific objective: “I was trying to find next of kin we could contact.”

Sandall was a bit more successful. Ruth was a San Francisco native, born 1921. There are no indications of siblings. Both parents -- James Langstaff Brown and Evelyn L. McGlynn Brown -- were born stateside, and the family of three lived in San Francisco for many years.

When the Browns lived in San Francisco, it was a hub of shipping endeavors. James was a ship machinist and boilermaker. During James’ time as a ship boilermaker, he probably worked side-by-side with child laborers. The work was – still is – physically demanding, logging many hours standing, often at towering heights. Boilers were made of heavy, thick metal to contain high-pressure steam and gases powering ships, among other things. Because James is listed as a machinist, it’s possible he maintained the equipment. It was rapidly-progressing technology at that time, and it took someone with an aptitude for learning quickly on the job. Someone like Ruth Virginia Brown’s father.

The couple welcomed Ruth Virginia Brown into the world August 12, 1921. She graduated San Francisco public secondary school Polytechnic High School June 1936. A few years later – 1942 – she was united in marriage with Peter Simonetti in Carson City, Nev. Was it a shotgun wedding? Possibly. Barbara Dolores Simonetti was born 1942. She lived only three years.

Ruth’s adopted community knows little about her life – just what ancestry websites and other resources say. There are gaping holes in her story that may never be filled. Efforts to find next-of-kin have proven fruitless. Ruth’s donor remains unknown. Maybe someone was moving and found it; “They just saw another box and left it,” Terry King surmised. “We have been able to put together some of the parts of the puzzle, but there are still many details that we don’t know… how did she come to York? Who donated her?” Elizabeth King said. “There are lots of questions left unanswered.”

There’s no lack of love for Ruth, however. A group of about 20 Yorkites from all walks of life, education level and faiths came together in an act of love Monday, Nov. 2, 2020, as Ruth was sent to her final destination. “We serve because it is our duty as Christians. Simply, it’s the right thing to do,” Elizabeth King said. No more traveling in a beat up cardboard box. A blue urn containing Ruth’s cremains rested as mourners who hardly knew her story showed Ruth a final act of earthly love. Wegner Monument and Metz Mortuary made sure she would never again been forgotten.

On the edge of Saint Joseph Catholic Cemetery, near Yorkites born and those relocated, an anonymous donor had given Ruth a plot – now surrounded by friends she never knew. Father John Sullivan presided over gravesite services. Besides the words sending Ruth to the heavens, not much was there to say. Terry King sang “Amazing Grace,” strumming his guitar. Elizabeth King thanked the group for coming, and the mourners departed for a meal – donated by Chances R. Meanwhile, as the cars and SUVs exited the cemetery via worn driveways, dirt was gently shoveled onto Number 17263, her earthly remains committed to the ground, buried. A life story probably – hopefully – filled with joy and love, and some sadness, buried, too.

Little Mary Pearl was found approximately three years ago on a cold and windy day.

The York fire department is responding to a house fire at 410 Iowa Ave. Upon arrival smoke was visible from the residence but no one was home …

Another world: Nurses on the coronavirus front line

YORK – York General Hospital nurses are on the front line of battling COVID-19 in York; it’s an endeavor filled with pain – both physical and …

Father John Sullivan of St. Joseph Catholic Church presides over the funeral of Ruth Virginia Brown – a woman with no ties to York except a cardboard box left at Blue Valley Community Action and friends she never knew she had.

The label of Ruth Virginia Brown’s cremains container is rather impersonal, unlike the wayward package’s treatment by those who discovered her – at least what they could.

Ruth Virginia Brown, shown here in a yearbook photo, remains a mystery to those who have cared for her cremains, randomly left at BVCA-York.