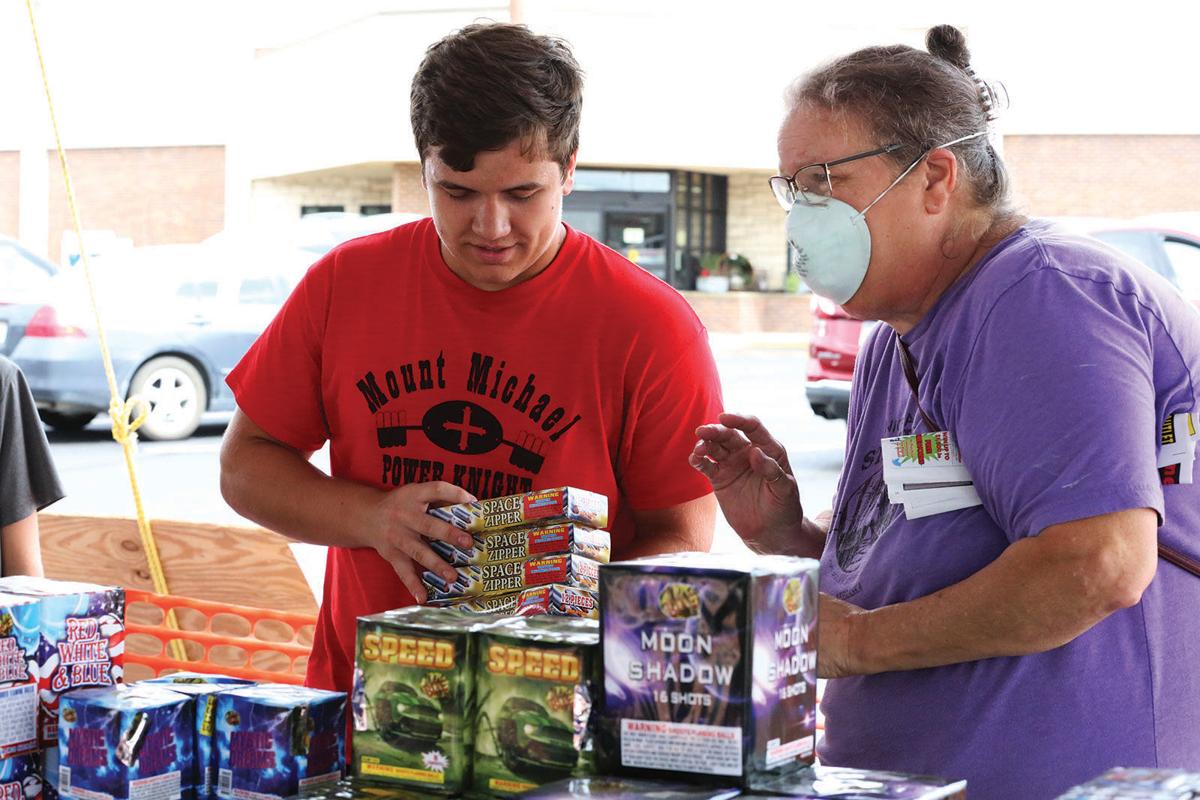 Sam Gustafson (left) helps shopper Cindy Williams grab an armful of some of Williams’ favorite fireworks. Gustafson and other fireworks sellers said they are seeing an increase in sales this year. 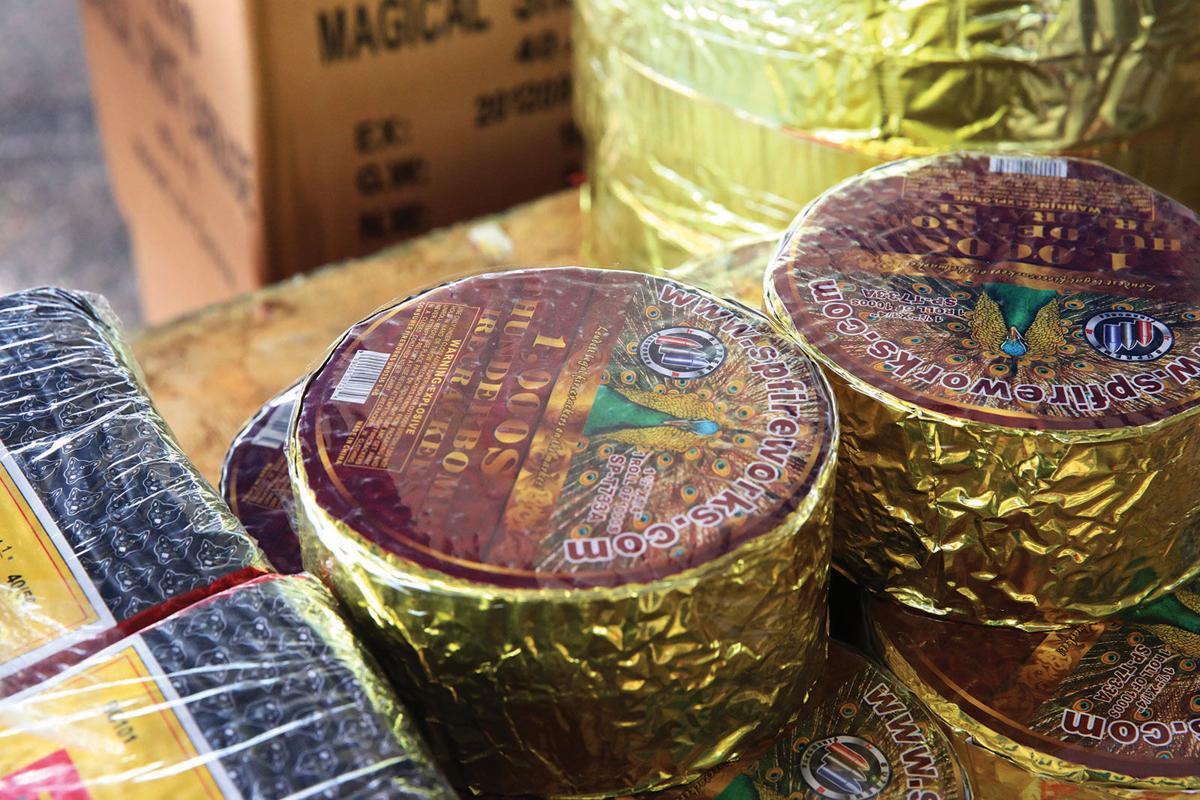 With every passing Independence Day, fireworks keep getting bigger, louder and more colorful. 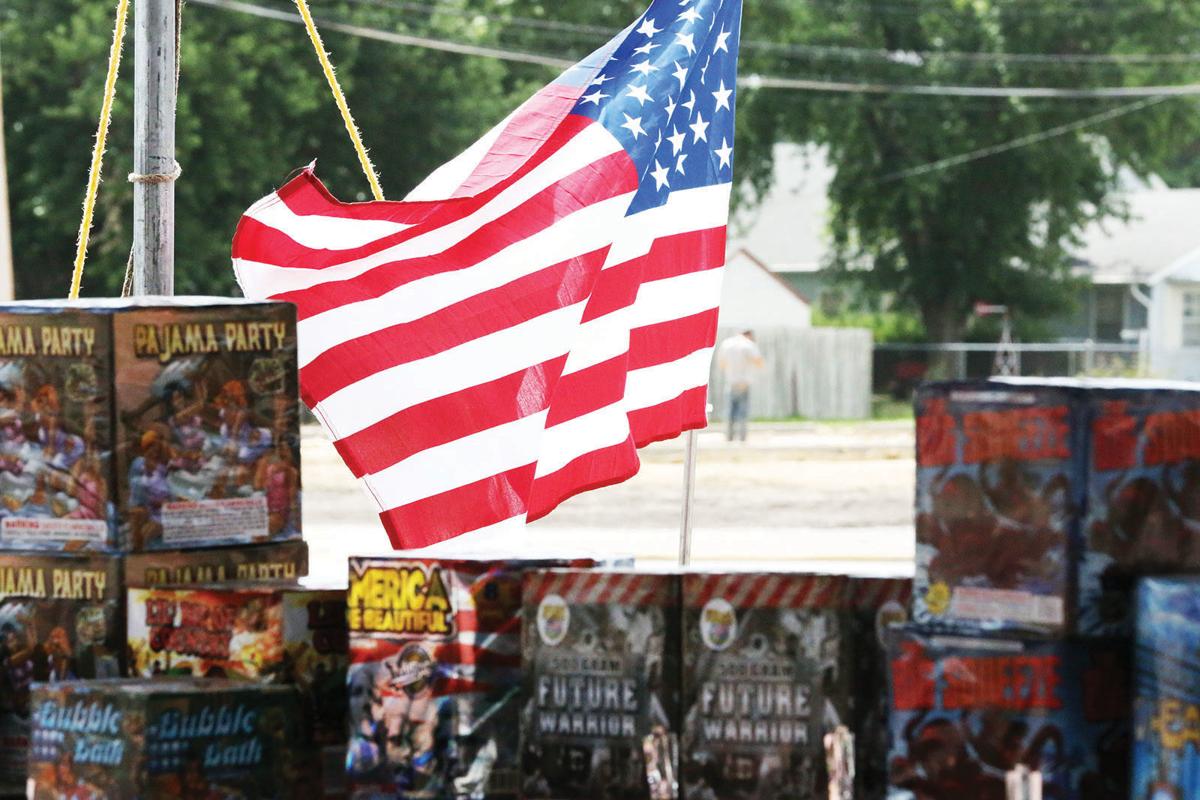 Culturally there are few things that embody the nation than fireworks on the Fourth of July, having been a part of the holiday since its inception.

Centuries ago, fireworks were but bamboo sticks thrown into a fire, which produced loud explosions, according to many historians.

Today selling fireworks is big business, with big top tents popping up across town vying to be known as the stand with the most, biggest and loudest. “People love the artillery shells,” said Bellino Fireworks stand’s Jared Dwiley. Dwiley estimated the stand’s cheapest firework at twenty cents, and the most expensive hovering around $150. The stand is operated by a group of families, and has been in business for ten years.

Centuries ago, early U.S. settlers brought the popular exploding entertainment with them across the Atlantic. Fireworks were part of the United States’ first Independence Day (July 4, 1777), and since then the tradition has continued.

At a tent further into town, Cole Gustafson, Sam Gustafson and Max Ericson man their family’s fireworks stand. Business is usually strong, especially at the beginning of the season, Sam said, but this year has been a bit different. “It’s been a lot better, with baseball getting cancelled and all that,” he said. Sam said Sunday night there were so many customers they had to kick people out of the tent at 10 p.m. to close for the day.

Dwiley said he and his stand’s co-owners weren’t sure what to think about Fourth of July 2020. “We don’t have a lot of expectations because this is such a crazy year,” he said.

Cindy Williams traveled from Geneva to peruse York’s fireworks offerings. “There are favorites at every place,” Williams said. She added that she and her family enjoy the Fourth of July tradition so much, that a fireworks budget isn’t considered. “Not for fireworks – if I want it I get it,” Williams said. Being unable to do things like go out to eat, she said, has saved a little more fireworks spending money. In 2018 as a whole, Americans spent an estimated $945 million on consumer fireworks – not counting organized display sales.

York’s upcoming Firecracker Frenzy and other explosive celebrations across the country not only entertain, but bring money into communities’ economies. According to the American Pyrotechnics Association, one of the country’s largest displays is “Thunder Over Louisville,” part of the Kentucky Derby’s month-long celebration. An economic study of the event estimates $56 million brought to the city’s economy by the event.

Fireworks like those used in Thunder Over Louisville and sold in stands across the country offer a much wider, more sophisticated variety of explosives than those first bamboo fireworks. Dwiley has a theory about fireworks’ continued popularity. “It’s a good family activity and get-together with friends. It just makes you feel good.”

The fireworks stands in York have officially opened and will remain open until midnight on the Fourth of July.

According to city ordinances, fireworks may be sold and purchased between 9 a.m. and 11 p.m. each day. Those are the same hours during which they can be discharged.

The hours are extended to midnight on the Fourth of July only.

Local officials want everyone to remember that bottle rockets and sky lanterns are not allowed.

People illegally discharging fireworks after or before the allowable hours could be subject to fines.

And everyone is reminded to not shoot fireworks onto other people’s property and to keep debris out of the streets.

Another very important reminder is to never, ever shoot fireworks from a moving vehicle. This has been done in the past, in York, which resulted in serious injuries for the participants and damage to the vehicle.

If anyone has concerns or complaints about misuse of fireworks, including discharge after hours, they should call the police department at 402-363-2640.

Meanwhile, another type of reminder is being stressed by representatives of York Adopt A Pet, regarding the effect fireworks can have on animals, particularly dogs.

Lamoine Roth from YAAP explained that “a dog’s ears are very sensitive and they don’t understand where this noise is coming from. I have had dogs who would hide under the bed shivering in fear even with my reassurance of trying to console them. If you have a dog or cat, pet rabbit or any other type of pet, take them inside. Put them in a bathroom, basement -- even the garage is better than being outside. If possible turn on a radio or TV to help dilute the noises coming through the walls. The volunteers at York Adopt a Pet will be overwhelmed with dogs coming into the shelter. Some dogs who bolt are never found. It is a terrifying ordeal when a dog is so scared that they just run and run. Unfortunately with all the fireworks going off in city limits, they can’t get away from the noise and sometimes run out into the country.”

If someone finds a dog running loose they are encourage to call their local law enforcement agency and/or YAAP so efforts can be made to return animals back to their owners.

Sunisa Lee's father after gold: 'Is this real?'

Sunisa Lee's father after gold: 'Is this real?'

Aedan Strauss, then a 17-year-old Lincoln East student, was life-flighted to a hospital in Kearney on Dec. 7, 2019, after the fall during a performance at North Platte High School.

The case is believed to be the first alleging COVID-19 relief fraud in Nebraska.

1920s ads touted Venice as a 'summer resort,' but it ended up as the Nebraska city that never was

An Omaha real estate firm had the idea in the heyday of the '20s that it could sell 1,500 cottage lots platted away from the lakes and the Platte River. So what happened?

Matt Innis, who has been holding public meetings opposing both CRT and comprehensive sex education, said he's in favor of teaching accurate history, but the advocates of CRT are pushing an agenda.

The Nebraska Department of Education has revised its proposed health-education standards, stripping out many of the sex-education references that provoked a groundswell of opposition to its first draft.

Luis Lucar filed a lawsuit Wednesday against Pillen Family Farms Inc., alleging he was fired for refusing to participate in hiring workers without proper citizenship documents.

The camp stewards serve as "a catch-all," one said, working as greeters, ice salesmen and a concierge service. But when they turn in for the night, alert only to knocks on the door, horseplay sometimes ensues.

The flood of threats that ultimately forced organizers to cancel the private event — slated to occur after businesses hours and unaffiliated with the museum's own programming — has prompted a police investigation.

A longtime figure in law enforcement in Burt County, Smith had worked in various roles and assignments in his time with the sheriff's office and Decatur Police Department.

Lincoln resident Sonlee Prack faces a felony charge for the chicken theft because of prior theft convictions.

Fan Day is Thursday at Memorial Stadium. Here are some final reminders before you head there

Back to School: Fillmore Central to see new faces

Sam Gustafson (left) helps shopper Cindy Williams grab an armful of some of Williams’ favorite fireworks. Gustafson and other fireworks sellers said they are seeing an increase in sales this year.

With every passing Independence Day, fireworks keep getting bigger, louder and more colorful.

Culturally there are few things that embody the nation than fireworks on the Fourth of July, having been a part of the holiday since its inception.