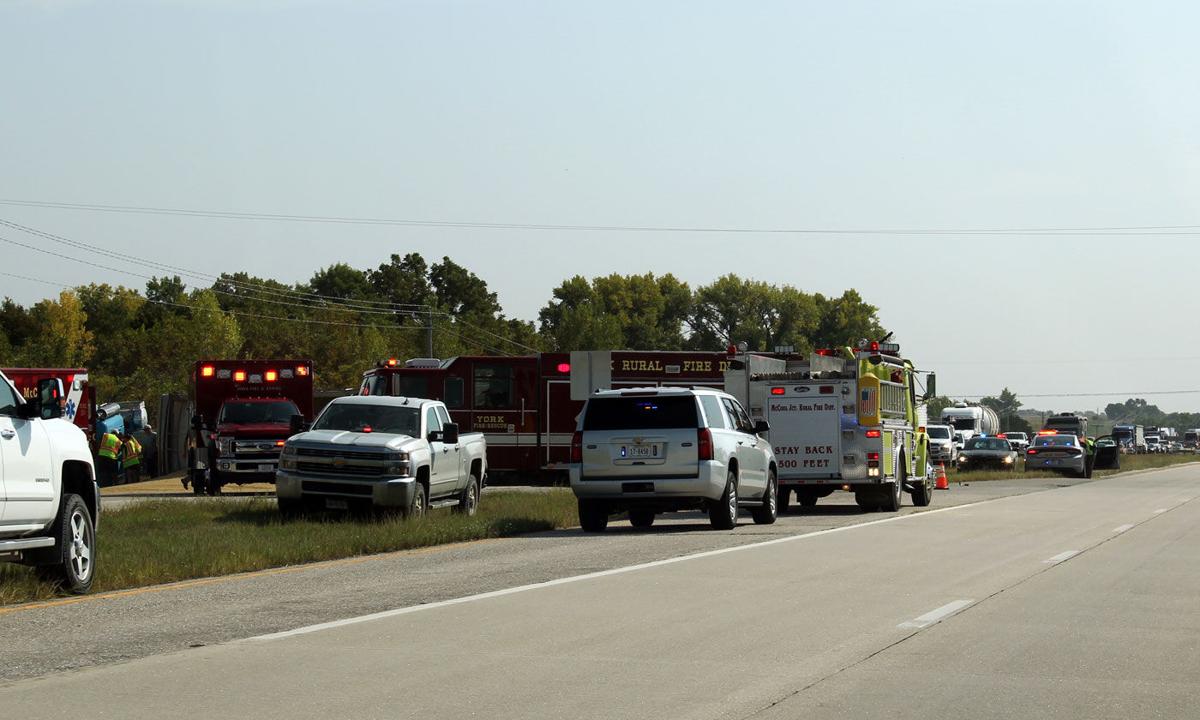 McCOOL JUNCTION – Local law enforcement and rescue personnel were dispatched to the scene of a serious accident at the intersection of Road 3 and Highway 81 at 2:39 p.m., Thursday.

At the scene, it appeared a pickup and a semi hauling grain had collided on the highway. The semi had overturned with the grain spilling onto the road surface.

While the wreckage left behind was significant, fortunately no one was killed.

Northbound traffic was halted for some time as the vehicles and debris had to be removed.

YSO Investigator Alex Hildebrand said, “Throughout the investigation, it was determined that a 1996 Freightliner driven by Lawrence McGowan of McCool Junction was attempting to turn eastbound on Road 3 from the southbound lanes of Highway 81.  As the tractor trailer attempted to navigate the turn, a Ford F-250 driven by Eric Banks of Bayou La Batre, Alabama was proceeding northbound into the intersection of Road 3 on Highway 81.  The Ford pickup struck the trailer being pulled by the Freightliner.  The tractor and trailer then overturned causing a load of soybeans to spill on the roadway.  Both drivers were transported to the York General Hospital with non-life threatening injuries.  Alcohol is not suspected to be a factor in this crash and seatbelts were in use by all parties involved.”

YORK – With 99 new confirmed cases of COVID-19 reported in the Four Corners Health District in the past two days, the cumulative number of cas…

YORK – A bench warrant was issued this week for the arrest of Daniel Graham, 41, of Milligan who failed to appear for sentencing in a case inv…

YORK – The number of new COVID-19 cases in the Four Corners Health District and York County continue to surge, according to health officials.

People rallying behind farmer who suffered loss in suspicious fire

LINCOLN — Neighbors and strangers are rallying to help a farmer from Henderson who lost an estimated $300,000 to $400,000 worth of harvesting …

A Paws for Pets: Quite the journey

My days off at the shelter are Sunday and Monday. I say this loosely because you will find me out trying to find a lost dog or posting on the …

GRESHAM -- The York County Sheriff’s Office is investigating a burglary that occurred on October 18 at 11:57 p.m. at the Gresham C-store Highw…

I-80 pursuit ends in arrest