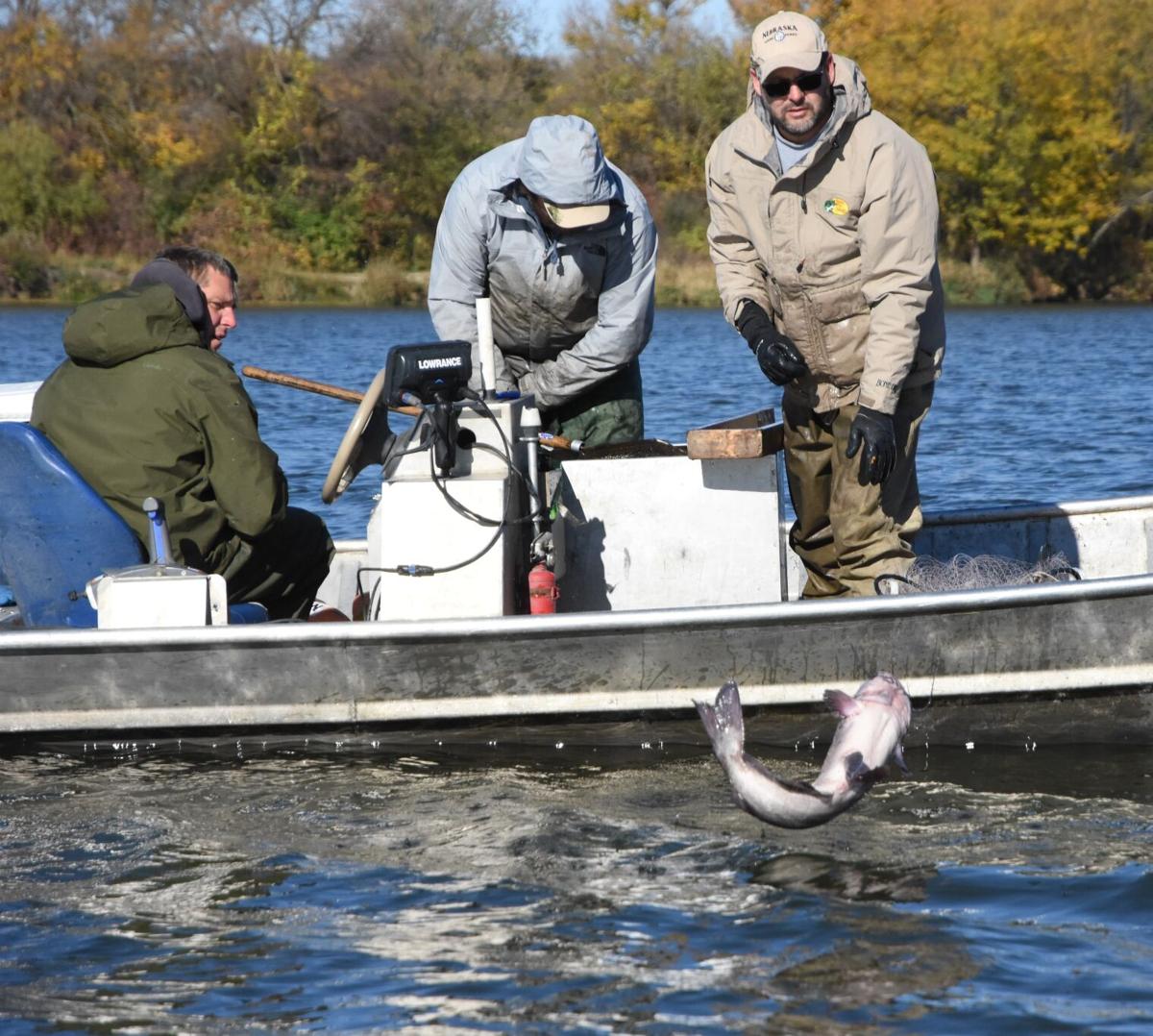 Fisheries biologist Jeff Jackson (right) tosses a nice channel catfish back into Meadowlark Lake after counting and recording its length in a Nebraska Game and Parks study Thursday, October 15. 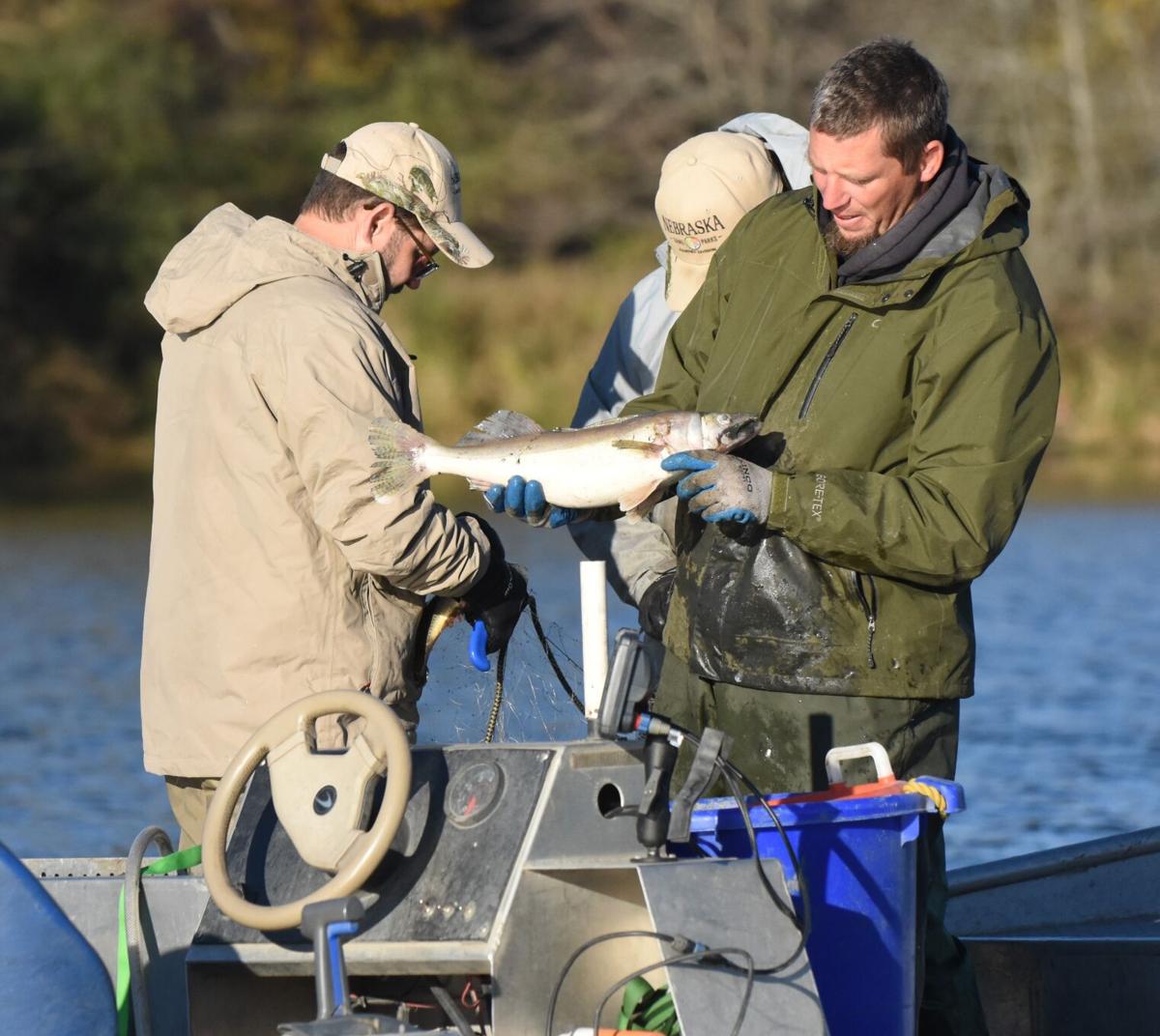 The unique species in Meadowlark Lake is the saugeye. The sauger/walleye hybrids are hatched, raised to 4-6 inches in length and then stocked in select Nebraska lakes.

MEADOWLARK LAKE - The bar graphs and narrative included in each year’s Fishing Forecast brochure don’t fill its pages by some miracle of modern technology, but only after hours of hard work in often trying conditions.

The Nebraska Game and Parks Fisheries Division, which divides the state into geographic regions, has a long and complex list of duties.

One requirement is periodic survey-driven assessments of fish populations in hundreds of lakes. Specimens of game species in each body of water are captured, examined, counted, measured and returned to the water at the exact spot they were captured.

Fish that do not survive often are utilized in laboratory examinations to record age, health, growth rate and other information.

Jackson said in his Southeast District alone there are 120 lakes. The district, he said, covers the part of Nebraska from Omaha west to York and south to the Kansas border.

The trio set a number of trap and gill nets on Wednesday, October 14, then returned to pull the nets and record their catch the next morning.

However as a fisherman who enjoys Meadowlark himself, Blank was disappointed to immediately find carp in the first gill net.

“I have never seen a carp in this lake until today” despite surveying it a number of times. “It is a sad day,” he said with a sigh of resignation.

The fish under the surface of Meadowlark that is definitely not run-of-the-mill is the saugeye. Because they are a stocked-only species, saugeye in the lake were of special interest to the biologists.

Jackson said saugeye are a hybrid cross of sauger and walleye, thus the odd but fitting name. The fish are produced in G&P hatcheries from eggs and milt gathered in the state, then raised to unusual size before being released.

The saugeye in Meadowlark are much larger than typical stocking size in that they are raised to 4-6 inches before release. Fish that size stocked this year spawned in April.

Spending so much time in hatchery runs makes saugeye pricey to produce, largely due to the volume of minnows required to achieve that size. If hatcheries are successful in acquiring large volumes of minnows themselves the cost is much less than if live forage must be purchased.

Jackson noted the cost is typically from a little over a dollar to as much as $1.50 each. That fact alone demands they be closely monitored and thoughtfully managed. If studies indicate saugeye cannot thrive in a given lake their introduction will end.

That is not the case, however, for Meadowlark, where the first infusion of saugeye came in 2016.

Netting surveys are not done every year in each Nebraska lake for obvious reasons of manpower and cost, but rather on a rotating basis. In addition to being vital in the business of fisheries management, the information is shared with the public each year in the Fishing Forecast pamphlet distributed in early spring. It is a fresh, reliable, annual font of information and thus much valued by anglers who have discovered it.

The 2020 Fishing Forecast that presents data from 2019 on-the-water surveys across the state’s footprint is easily found online at outdoornebraska.gov. Click on the blue Fishing icon at the right side of the page, then scroll down to Fishing Forecast.

YORK – Six COVID-related deaths have been reported in the Four Corners Health District.

Sheriff’s department getting reports of new type of scam

YORK – The York County Sheriff’s Department has received two reports in recent days of what appears to be some type of new scamming effort, Sh…

YORK – Whitney Haack, 34, of Fairmont has been formally charged with possession of methamphetamine, a Class 4 felony, and the case has been bo…

YORK – The Four Corners Health Department is reporting 123 new cases of COVID-19 in the health district in the past three days (Nov. 21-23).

YORK – The York Board of Health will be holding a meeting next Tuesday to discuss the possibility of passing a mask mandate for the City of York.

More than 100 friends and loved ones lined the halls of Immanuel Medical Center to bid farewell to the nurse.

YORK – Community spread of COVID-19 continues throughout the health district and York County.

YORK – This week, Steve Postier, who was recently elected to a seat on the city council, asked for his residential/business property to be ann…

Fisheries biologist Jeff Jackson (right) tosses a nice channel catfish back into Meadowlark Lake after counting and recording its length in a Nebraska Game and Parks study Thursday, October 15.

The unique species in Meadowlark Lake is the saugeye. The sauger/walleye hybrids are hatched, raised to 4-6 inches in length and then stocked in select Nebraska lakes.