Here's how we got to 1 million global coronavirus deaths, with the US leading the world 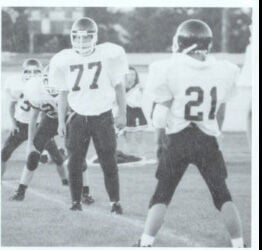 This photo from the Fairmont High School 1995 Yearbook shows Northeast Fillmore Raiders – a team comprised of players from Exeter and Fairmont – preparing for a play. That year marked the second season of a high school football cooperative between the schools, which also included sharing several classes. 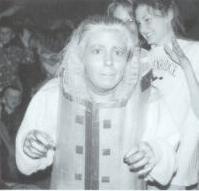 A photo from the pages of the 1997 Fairmont High School Yearbooks shows students from Fairmont and Exeter participating in the dual-school acting group, the E-F Troupe.

FAIRMONT -- Before Fillmore Central, before Exeter-Milligan, was the cooperative between Exeter and Fairmont Public Schools.

In 1990, Fairmont, Exeter and McCool Junction Public Schools continued discussions about sharing classes; according to the April 12, 1990 edition of the Fillmore County News, Fairmont students could join Exeter students in physics, Spanish and “satellite” (distance-learning) classes in Exeter. Fairmont, in turn, would host architectural drafting. (McCool eventually left the agreement.)

During the 1992-93 school year, cooperative classes conducted in Fairmont included additional industrial arts classes as well as other academic classes. As the years progressed, more classes were made available between the two schools, such as world history, art and advanced math.

“Academically it gave kids options as far as teachers and classes,” said Denice Kovanda, who at the time was guidance counselor for both districts.

Students traveled up and down Highway 6 from campus to campus via school van transportation. Teachers also did some traveling, Kovanda included. “Typically I was in Fairmont in the morning and Exeter in the afternoon. I would bring kids from Fairmont over to Exeter with me,” Kovanda said.

“I remember in seventh or eighth grade many kids came over [to Fairmont] from Exeter,” said Joni Powers, a member of Fairmont High School Class of 1998. “That was probably the first time we were together for a class. At first it might have been a little awkward, but we ended up making quite a few friendships that have lasted a lifetime.”

Powers said in retrospect, she realizes the benefits to both schools, academically and socially. “It gave two small schools more options for classes and a chance to make a few more friends.”

“Personally, I loved the years that we were the Northeast Fillmore County Raiders for consolidated football,” she added.

The football partnership between Fairmont and Exeter began with a junior high team, eventually moving on to begin a high school team together: the Northeast Fillmore Raiders. The Raiders played their first game September 3, 1993. Regulations concerning newly-consolidated schools or cooperatives prevented the Raiders from playing in NSAA-sanctioned playoffs. To accommodate schools in similar situations, the Gridiron Conference was formed. The conference sent the Raiders far and wide, sometimes playing in Kansas. “A lot of fun memories were made on those road trips,” Powers said.

A theatre cooperative – the E-F Troupe -- was also formed, uniting the two schools in the performing arts. Kovanda helped direct the actors’ endeavors, and said she remembers fondly the different plays students put on. “We did ‘Flowers for Algernon’ which was fun,” she said.

Competing against their football and theatre counterparts in other school activities gave the students a unique take. “Weeks where we would face each other in sports were always fun,” Powers said. “Egos would flare and the boys would razz each other. There might have been some name calling. I remember it being good-natured.”

“The kids had fun together. I never felt a rivalry,” Kovanda said. Often the schools celebrated one another’s successes. “One of the years I was there we were in the same speech district. Exeter got first and we [Fairmont] got second,” Kovanda recalled. “We were the only two schools who sent competitors to state. That was sweet -- especially since Deb Fette [then-Exeter English teacher and speech coach] was one of the reasons I went into English education.”

“In retrospect, it’s hard to say whether it was a good idea to end the cooperative,” Powers said. “Given that both schools eventually decided to consolidate with other towns, it is difficult to imagine what it might have been like if we had continued.”

YORK – Four Corners Health Department officials are reporting 25 new cases of COVID-19 in the district, over the span of the last two days.

YORK – The Four Corners Health Department is reporting that a second person in York County has died as a result of COVID-19.

County board says no to vehicle purchase

YORK – When the York County Commissioners reviewed their payroll and vendor claims this week, they saw one claim from a vehicle dealership for…

County attorney office says it will share its piece of $441,165 in seized drug money

YORK -- The York County Attorney's Office says it will receive its share of $441,165.00 in seized U.S. currency stemming from drug interdictio…

Council’s agenda to be light

This photo from the Fairmont High School 1995 Yearbook shows Northeast Fillmore Raiders – a team comprised of players from Exeter and Fairmont – preparing for a play. That year marked the second season of a high school football cooperative between the schools, which also included sharing several classes.

A photo from the pages of the 1997 Fairmont High School Yearbooks shows students from Fairmont and Exeter participating in the dual-school acting group, the E-F Troupe.