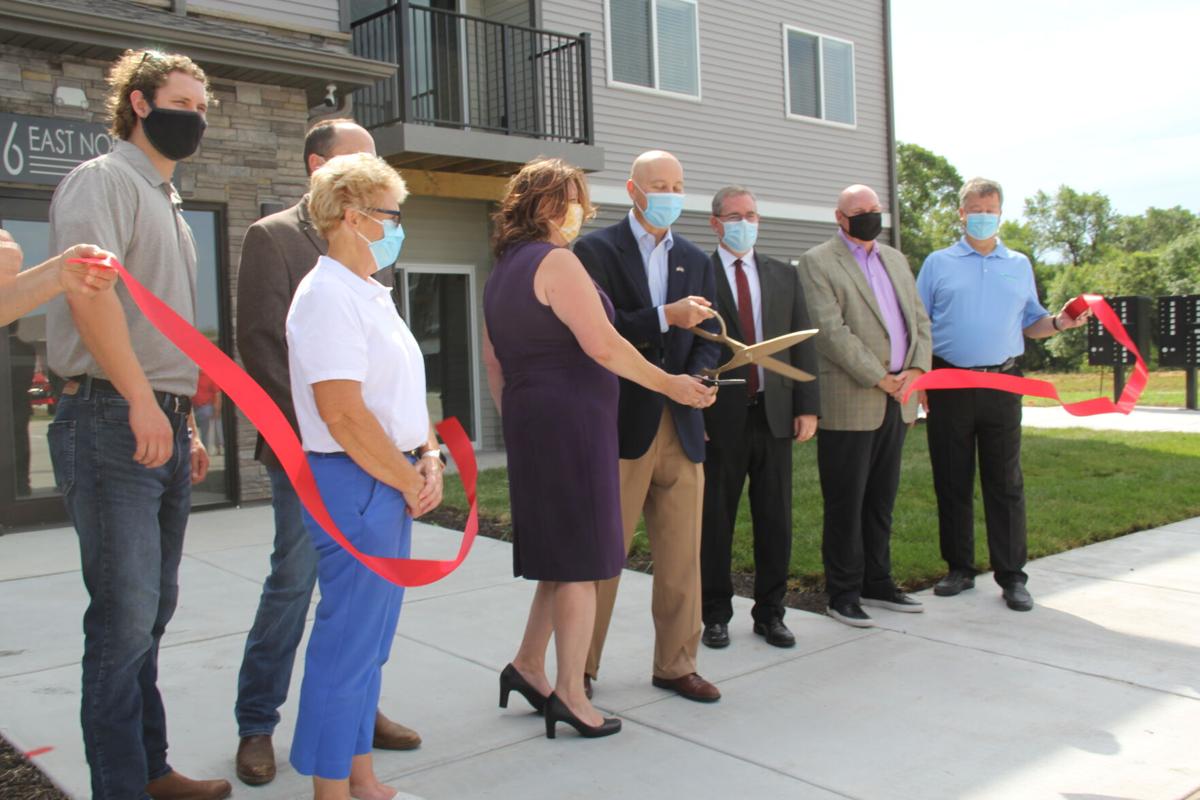 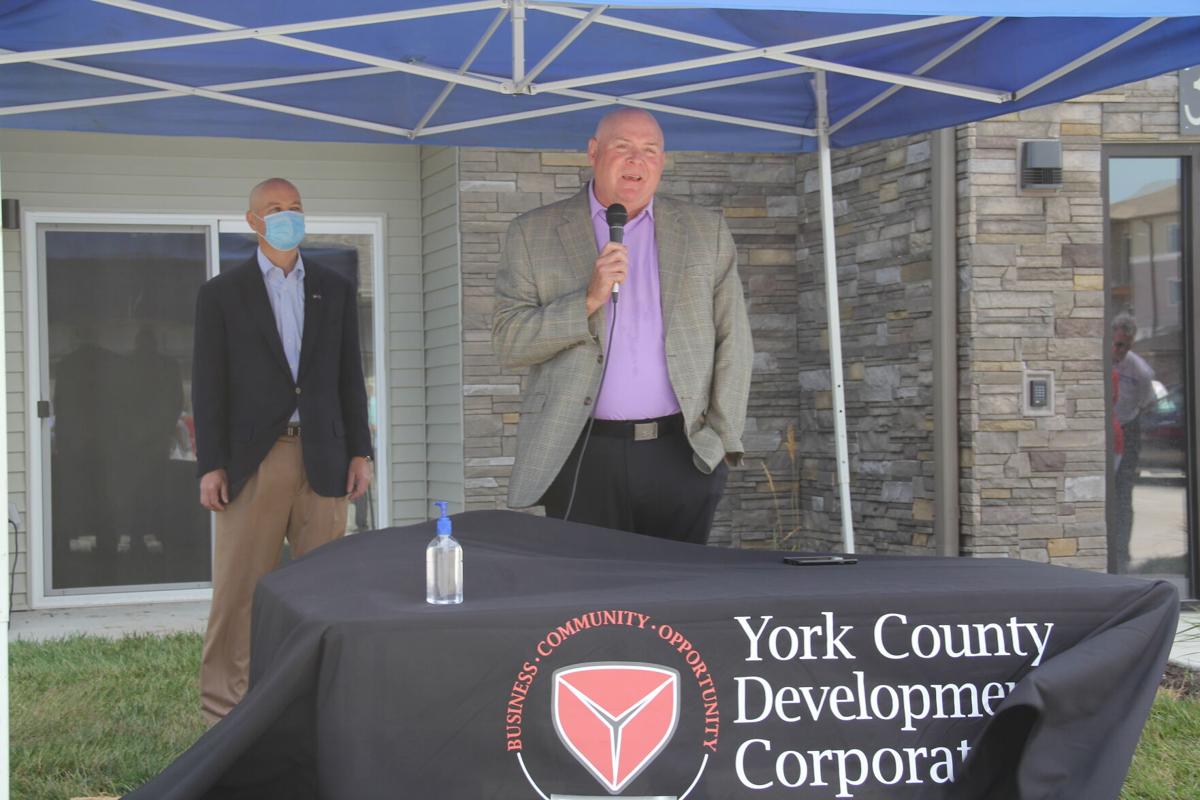 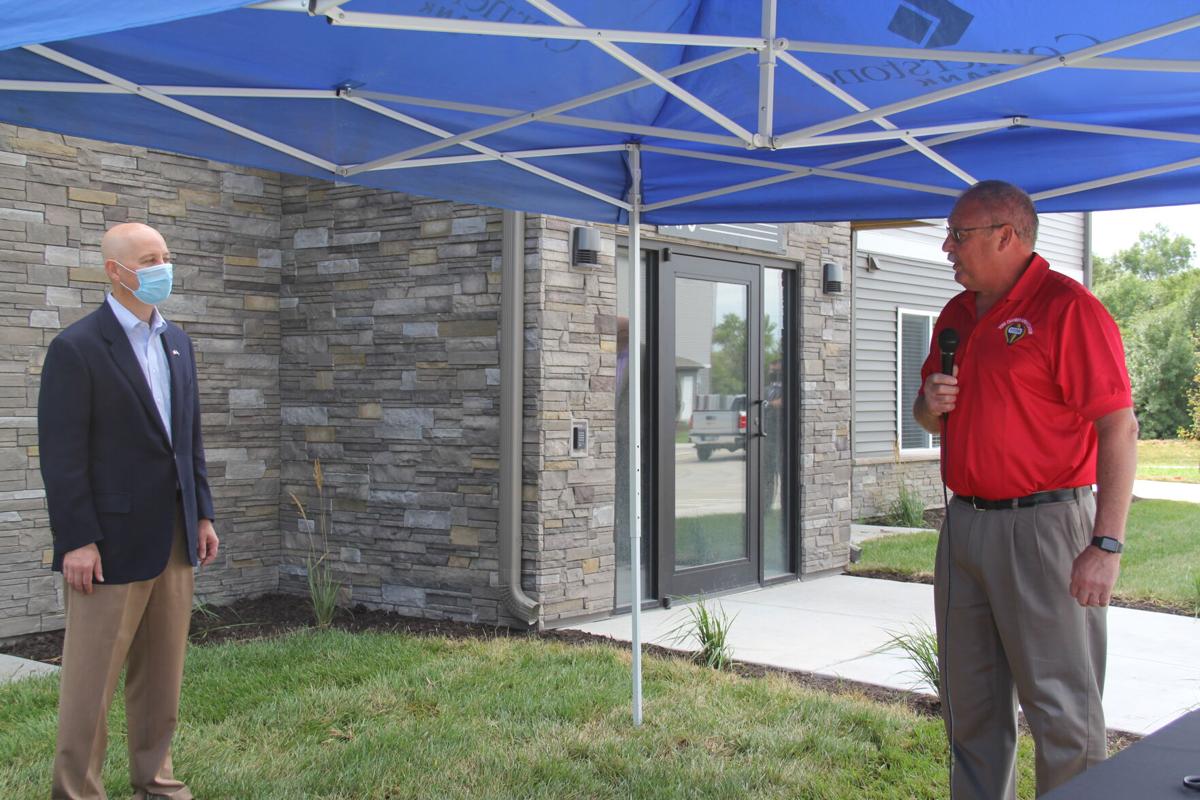 York County Commissioner Chairman Randy Obermier and Governor Pete Ricketts participated in an announcement that a $500,000 housing rehabilitation program in York County will go forward as the funds have been granted for that purpose here.

YORK – Governor Pete Ricketts joined many local residents and leaders Wednesday morning in celebrating new housing opportunities here and across the state, with a ribbon cutting event for the new York Creekside Apartments.

He also announced that the county has received a $500,000 grant for a housing rehabilitation program that will be available to homeowners in the smaller communities in York County.

Just a year ago, Governor Ricketts and numerous project participants turned shovels in the field east of 220 East Nobes Road for the new multi-family housing project.

Today, the project is finished and new housing options are now available as there are 48 units of varying sizes and plenty of amenities.

This project has been in the works for some time. As explained earlier by York County Development Corporation Executive Director Lisa Hurley, “in January, 2018, YCDC showed Cliff Mesner (Mesner Development) and Kelby Herman (Progress Builders) several sites, along with a community tour. This was a follow up to a conversation YCDC staff had with Cliff and Kathy in October 2017 during a conference. When they called with an idea for a York County application to the Rural Workforce Housing Fund for an apartment complex, we reacted and started asking for donations. The York Community Foundation was gracious enough to let us use them as a pass-through for the donations. Our local donors allowed us to apply to NIFA for the RWHF Matching Funds and Nebraska Department of Economic Development (DED) in March 2018. YCDC received the NIFA award ($250,000) and $323,000 from DED for the creation of a RWHF Revolving loan that would first fund the York Creekside Apartment Complex. After the award, the developers analyzed several sites before deciding on the site.

Governor Ricketts was and has been a major proponent for LB518 – passed by the Nebraska Legislature and signed by the governor in 2017 – which established the Rural Workforce Housing Investment Act with a $7 million fund. Numerous projects, like the one in York, have been the result of that act and the workforce development efforts across the state.

“This is a great day for York,” Governor Rickett said prior to the ribbon cutting at the apartment complex. “We continue to fight COVID-19 and in the state of Nebraska we protected our hospital capacity. In York County, you’ve had less than two cases a day for the past two weeks. We have to learn to manage this situation for the long-term. We received $9 billion from the federal government for our recovery,” which is being appropriated to businesses, farmers, municipalities, counties, etc., “and we continue to be able to provide grants.

“Before the pandemic, the number one issue we were dealing with in the state of Nebraska was workforce and how to make sure we have enough housing to accommodate those people who work here,” the governor continued. “That was our biggest challenge and then we passed LB518. York received this money, and you came together to make it work. Those dollars went to help fund this $5.2-plus million complex. When that money is repaid, it can be cycled back in for more projects like this in your community.”

Governor Ricketts said Nebraska has been noticed as being one of the least economically impacted states in the nation, considering results of the pandemic, and “that means we are very resilient and we will continue to grow. That’s why it’s so important to have projects such as this. The legislature added another $10 million into this fund a week ago – that will be reinvested as well, on top of the original $7 million, for more projects.

“I’m excited to be here this morning, for this ribbon cutting – it shows how you are investing in the future growth of your city,” the governor added.

After the ribbon cutting ceremony was held, the governor noted that he wanted to make an announcement.

“This time, it is to praise the York County Commissioners,” Governor Ricketts said.

He explained the existence of the Affordable Housing Trust Fund, which exists to help with housing programs that involve building new houses, doing housing rehabilitation, helping future homeowners with financing, etc. The governor said $10.25 million is available for these types of programs – which are also financed through matching funds from communities and counties.

“The York County Commissioners made a grant application for a housing rehabilitation program and we awarded York County with $500,000 for their program,” the governor said. “Now, 18 homeowners will use that program for rehab and upgrades to their homes and York County will put in a $50,000 match.”

York County Commissioner Chairman Randy Obermier thanked the governor and noted that back in May, the York County Development Corporation had encouraged the county to apply for these funds.

“This type of program is familiar to York, as this has been done before in the city of York, but this time around this program will be for eligible homeowners in the other communities in the county. They will be able to benefit from this,” Obermier said.

YORK – Today, while in York, Gov. Ricketts announced the recipients of $10,251,498 in awards from the Nebraska Affordable Housing Trust Fund (…

York County Commissioner Chairman Randy Obermier and Governor Pete Ricketts participated in an announcement that a $500,000 housing rehabilitation program in York County will go forward as the funds have been granted for that purpose here.