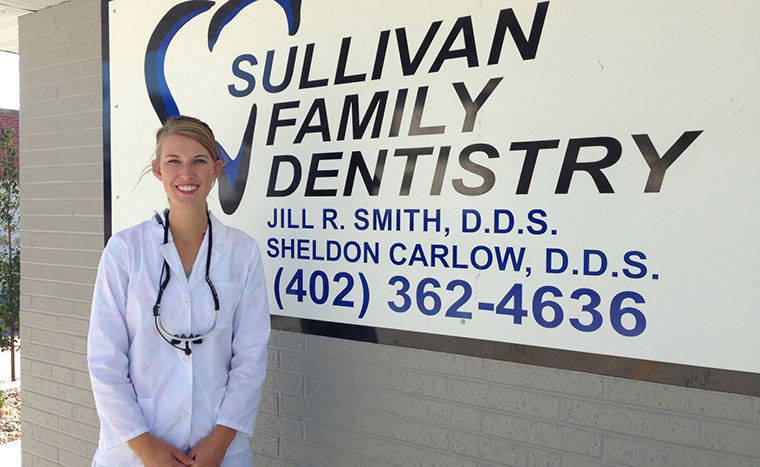 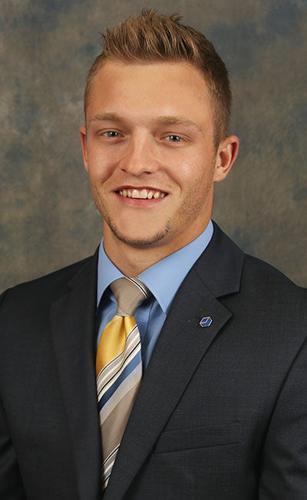 Jill Smith DDS grew up near a small town and now that she’s done with school and out in the working world, she’s glad to have landed in York. Dr. Smith joined the staff at Sullivan Family Dentistry located on Burlington Avenue just east from the York City Auditorium in July of this year.

She grew up on the family farm just south of Elgin, and graduated from Elgin Pope John in 2009. She attended Chadron State College graduating with a degree in human biology in 2013. She then went on to the Dental College at the UNMC in Omaha and graduated in 2017.

Dr. Smith had attended Chadron as a participant in the RHOP program or Rural Health Opportunities Program. In her case, RHOP is a cooperative agreement between Chadron State College and the University of Nebraska Medical Center. The purpose of the program is to recruit and educate high school students from rural Nebraska who will return to practice in rural areas of the state. This program represents a commitment and dedication to the education of Nebraskans and quality health care for citizens of the state.

Right now she and Kevin, her husband of two years live in Lincoln. Originally from Randolph, he is a project manager for a general contracting firm so she was looking for a smaller community close to Lincoln to accommodate both their careers. The couple has been married for two years.

“We like anything to do with the outdoors,” said Dr. Smith. “That includes biking, running, walking and other outdoor activities.”

“I’m excited to be here in York,” she added. “Everyone here in the office has been great to work with and they have been so nice. I’m excited to meet new people and I love what York has to offer. Please don’t be afraid to come up and introduce yourself if you see me on the street.”

The Board of Directors of Cornerstone Bank announced the appointment of the following officer of the bank at their recent meeting:

Tanner Schwanz was named a Residential Loan Officer for Cornerstone Bank in York. Schwanz is a graduate of the University of Nebraska at Kearney with a Bachelor’s Degree in Finance. He interned with Heritage Bank in Kearney and most recently served as an Assistant Vice-President specializing in mortgage loans with the Hershey State Bank. Schwanz will be moving to the York area soon.

Farmer and Michael Brower, current owners of Farmer & Son Funeral Homes, would also like to announce the addition of Kevin Perrien to their staff. Perrien brings with him 20 years of funeral directing experience. He and his wife Tonya live west of Grafton and have four children; Jackson, Dayvie, Garrison, and Kennedy.

”Although new to the communities we are privileged to serve, Kevin is not new to us,” said Farmer. Perrien, along with Farmer and Brower, is a partner in the Sutton Memorial Chapel in Sutton and the McLaughlin Funeral Chapel in Clay Center, serving the communities of Clay Center, Sutton, Deweese, Fairfield, Harvard, Saronville, Stockham and Glenvil. This partnership was formed in 2008.

Perrien will be working out of Farmer & Son Funeral Home some of the time, while still presiding over operations in Sutton and Clay Center. If you see Kevin, please welcome him to the community.

Linda and I got a bonus this past weekend when we got to host our one-year-old Ohio grandson Colton for the weekend when his parents and his other set of grandparents had the opportunity to come back to Lincoln for the Ohio State football game. We picked him up from the airport on Friday morning and sent him back on Sunday.

We had tons of fun and did our best to have him decked out in Husker gear on game day, despite the way the game turned out. He ate well, napped well, slept well and he loves him some good dance music. If he has one fault at the moment, he likes to wake up and get his day going at about 5:30 a.m. However, that was a small price to pay for some extra time with him, considering he lives 12 hours away.

YORK COUNTY — The Nebraska State Patrol is investigating a fatality crash that occurred in York County following a multi-agency pursuit.

Ryan Kizzier was a husband and father of two young boys.

One of the hunters was flown to Lincoln because of his serious injuries.

It wasn't until the woman got home at the end of the day that she was met by police officers, who told her the patient was her 17-year-old daughter, Montana.

A woman was killed and a man suffered minor injuries after their vehicle struck a bridge guardrail while being pursued in York County.

Henderson "meats" the needs of the hungry with mobile canner

HENDERSON — A white, mobile cannery arrived early at sunrise Monday morning in the parking lot of the Bethesda Mennonite Church. Every year, t…

So many different kinds of donuts. That’s what you’ll find when you walk in the front door at the new Daylight Donuts At The Way Station locat…

YORK – The York Fun Club, after decades of travel and experiences for many locals, has had its final adventure.

York prepares for first Heart of the Holidays Christmas event

9 charts that show how the economy is performing in Nebraska