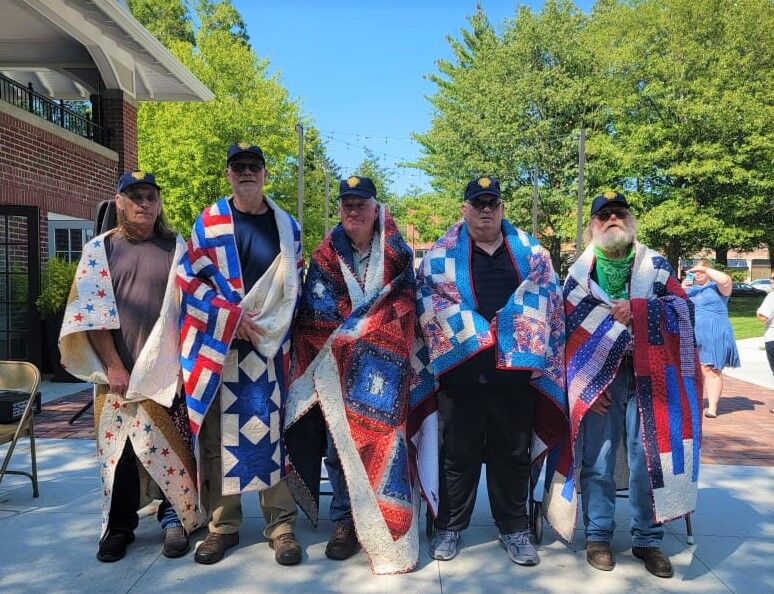 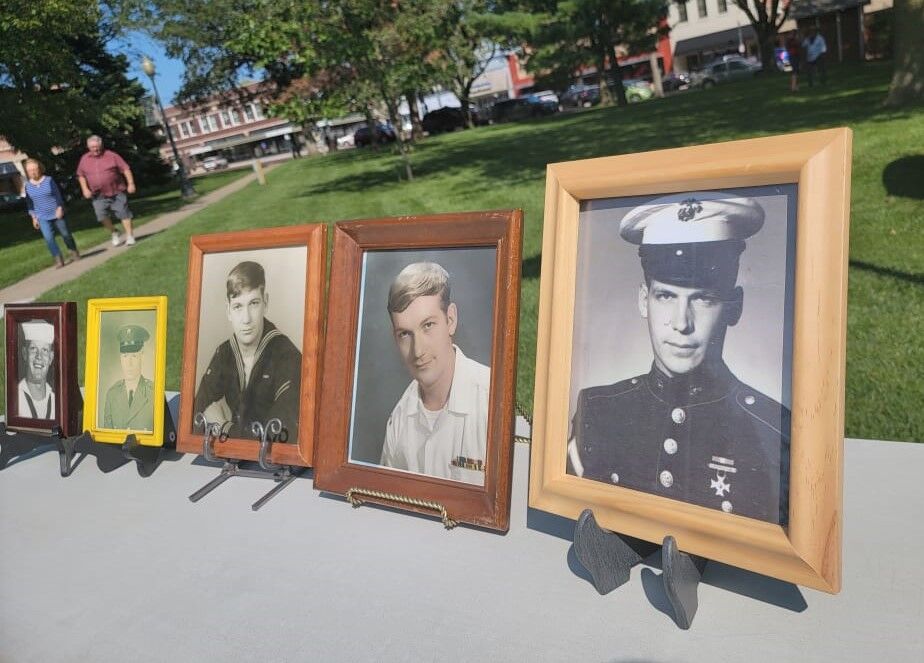 Photos of the Noyd brothers who served in the Vietnam War were displayed. Pictured, in no particular order: Larry, Terry, Gary and Perry Noyd. Not pictured is John Noyd. 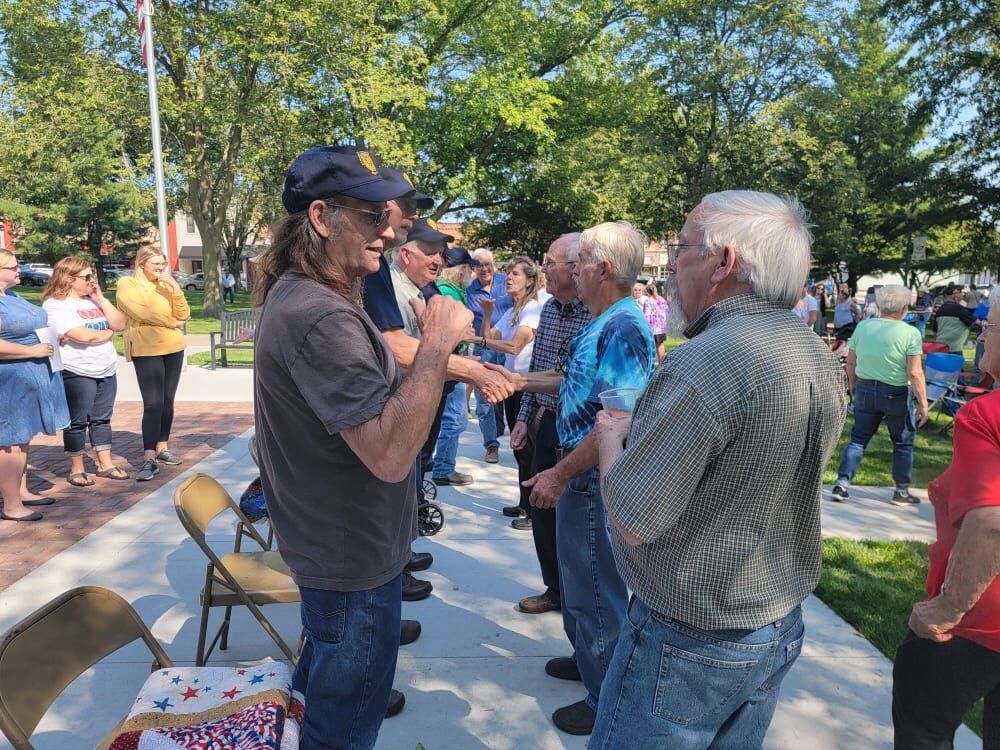 Community members of Stromsburg give thanks and honor to the Noyd brothers who all served during the Vietnam War.

STROMSBURG -- On Sunday, September 5, five Vietnam veterans, who are brothers in the Lee and Alice Noyd family of Stromsburg, received Quilts of Valor at the Stromsburg city square.

At the ceremony, the Noyd brothers were recognized for their service in the military along with the many sacrifices the Noyd family has made.

Conscription or military draft was started as far back as the American Revolution. It has been used several times during the history of the United States. Besides the Revolution, it was used during the Civil War, World War I, World War II, the Korean War and the Vietnam War. During the late 1960s and early 1970s, most young men faced being drafted. There were exemptions that could defer them from service, but there was no guarantee they would receive this. If they were drafted, they were going to serve in the Army.

Larry, Terry, Perry, John and Gary Noyd all chose to serve their country.

The sister of the Noyd brothers, Sharon Noyd said, “They were all just young kids going to war.”

Larry Noyd made the choice to go into the Navy with Ray Zimmerman on the buddy system because he knew he would eventually become drafted. They were considered “kiddie cruisers” as they were only 17 and needed their mothers’ signatures for them to serve.

Larry began his military service on August 19, 1964, and was honorably discharged from active service on December 20, 1967. His basic training was in San Diego, California. Larry was on two different ammunition ships with the first one being the USS Mauna Kea and the last one the USS Haleakala. These ships brought bombs, fuel, water, food, tours, mail and passengers to the aircraft carriers and other ships. The Haleakala was in the Gulf of Tonkin when an actual gunfight occurred.

Larry served two tours doing coastal operations during the war. Larry spent most of his time in the engine room and had the rank of petty officer third class, machinist mate E4 at his discharge. Within 246 days’ time, the USS Haleakala made seven trips to the line unloading 12,964 tons of ammunition onto 172 ships. Larry received the National Defense Service Medal Authorized, Vietnam Service Medal with two stars, Republic of Vietnam Campaign Medal with Device.

On October 13, 1967, Perry Noyd followed Larry’s example and joined the Navy. He was discharged from active duty August 11, 1971, at the rank of fireman machinist mate E3. The USS Coral Sea was an aircraft carrier, and Perry’s job while on this ship was in the engine room. He made three nine-month tours overseas, mostly close to Vietnam. His ship was sent to Korean waters to help convince the North Koreans to release their American prisoners they had held captive for 11 months after capturing the USS Pueblo on January 23, 1968. The prisoners were tortured and abused during these months until the government finally persuaded them to release the crew.

Terry Noyd was drafted into the Army and began his active duty on April 23, 1968. He received an honorable discharge on March 28, 1970 at the rank of staff sargent E6. Since Larry and Perry were already serving in a war zone when Terry was drafted, he could not be sent over to Vietnam until Larry came home. The Army wouldn’t send more than two from the same family into a combat zone. He did his basic training and advanced individual training at Fort Lewis, Washington. Then, he was sent to Fort Benning, Georgia for a training session called NCO.

Terry was sent to Vietnam after Larry was discharged and spent almost a year in combat, in charge of a platoon. Terry is the only Noyd brother who took part in combat duty on land in Vietnam.

Sharon Noyd said Terry was the first of the brothers notified he was to receive a Quilt of Valor several months ago. Sharon said, “Terry said he would not accept the Quilts of Valor unless his brothers received it too.”

In August of 1972, John Noyd was drafted into the army and began his active duty. He received an honorable discharge from active duty in August of 1974 at the rank of E4. John’s basic training was at Fort Leonard Wood, Missouri. Then, he was stationed at Fort Bliss, Texas for the remainder of his time in the military. John’s assignment while in the service was to be a personal records clerk. John received a Sharp Shooter Medal and Good Conduct Medal.

Gary Noyd knew there was a good chance he would be drafted, so he chose to join the Marines with a friend. They went in on the buddy system, but never served in the same place after boot camp. His active duty started in January of 1973 and he was honorably discharged from active duty in January of 1975 at the rank for Lance Corporal E3. Gary did his basic training at Parris Island, South Carolina and did radio training at San Diego, California. His overseas assignment was Iwakuni, Japan as a clerk. Gary received a Sharp Shooter Medal and Good Conduct Medal.

Sharon Noyd said, “The last two brothers drafted in at the end of the war. They lucked out because they didn’t have to be on land and in combat.”

All five Noyd brothers served and came back home safely. That was not the case for many. The Vietnam War brought a lot of discontent back to the United States. Many veterans were not treated with respect when they returned from duty.

Group leader of Stars, Stripes and Stitches which donated the quilts, Joelle Wacker, said, “We know freedom is not free. We have freedom because of the dedication of the Noyd brothers and men and women like the Noyd brothers.”

The quilts are awarded, not just handed out. The whole concept of giving a Quilt of Valor to military personnel was started in 2003 by Catherine Roberts. Her son was serving in Iraq when she had a vivid dream of a soldier in distress. The next thing she saw in her dream was he was wrapped in a quilt that gave him hope and a spirit of well-being. Upon waking, Catherine decided to make a difference in the lives of those serving in the military by making quilts. Quilts of Valor represent the service, sacrifice, and valor of men and women who have served the United States.

Sharon Noyd said, “Serving this nation was an honor for the brothers, yet it was a sacrifice, and without sacrifice, our nation wouldn’t be where it is today.”

Woman accused of having meth in her pants

Motorcyclist flees from sheriff's deputies, pursuit started in York and ended in Shelby

Editor’s note: On Saturday, Sept. 15, 2001, the York News-Times published this story, which was a first-hand account written for us, by York H…

YORK – Two COVID-related deaths have been confirmed in the Four Corners Health District, according to local health officials.

YORK – Danielle Root, 34, of Gresham, was sentenced to jail time, in York County District Court this past week, in a case where she was charge…

YORK – The 2021 Yorkfest King and Queen – Lonnie Berger and Marilyn Jackman – were crowned during the annual luncheon held Friday.

YORK – Kalin Koehn, 19, who is listed in court documents as a transient, is accused of felony terroristic threats in which he allegedly threat…

Geneva woman bound over to District Court on drug charge

YORK – Heather Hurst, 36, of Geneva, has been charged with possession of methamphetamine and the case has been bound over to District Court.

Health director: “We are having a lot of COVID cases, all ages”

YORK – “We have had, we are having a lot of COVID cases, again this week, and they are of all ages,” Four Corners Health Department Director L…

YORK – A deputy with the York County Sheriff’s Department and his canine partner, Loki (one of the county’s narcotic detection dogs), are resp…

He won't be there in person, but Osborne's fingerprints are all over Saturday's rekindling of NU/OU rivalry

From Black 41 Flash Reverse to a Jet stream, here are 12 defining moments in the NU-OU rivalry

Photos of the Noyd brothers who served in the Vietnam War were displayed. Pictured, in no particular order: Larry, Terry, Gary and Perry Noyd. Not pictured is John Noyd.

Community members of Stromsburg give thanks and honor to the Noyd brothers who all served during the Vietnam War.