Bernice Mason is a lifelong advocate for veterans, children
0 comments
Share this
{{featured_button_text}}
1 of 2 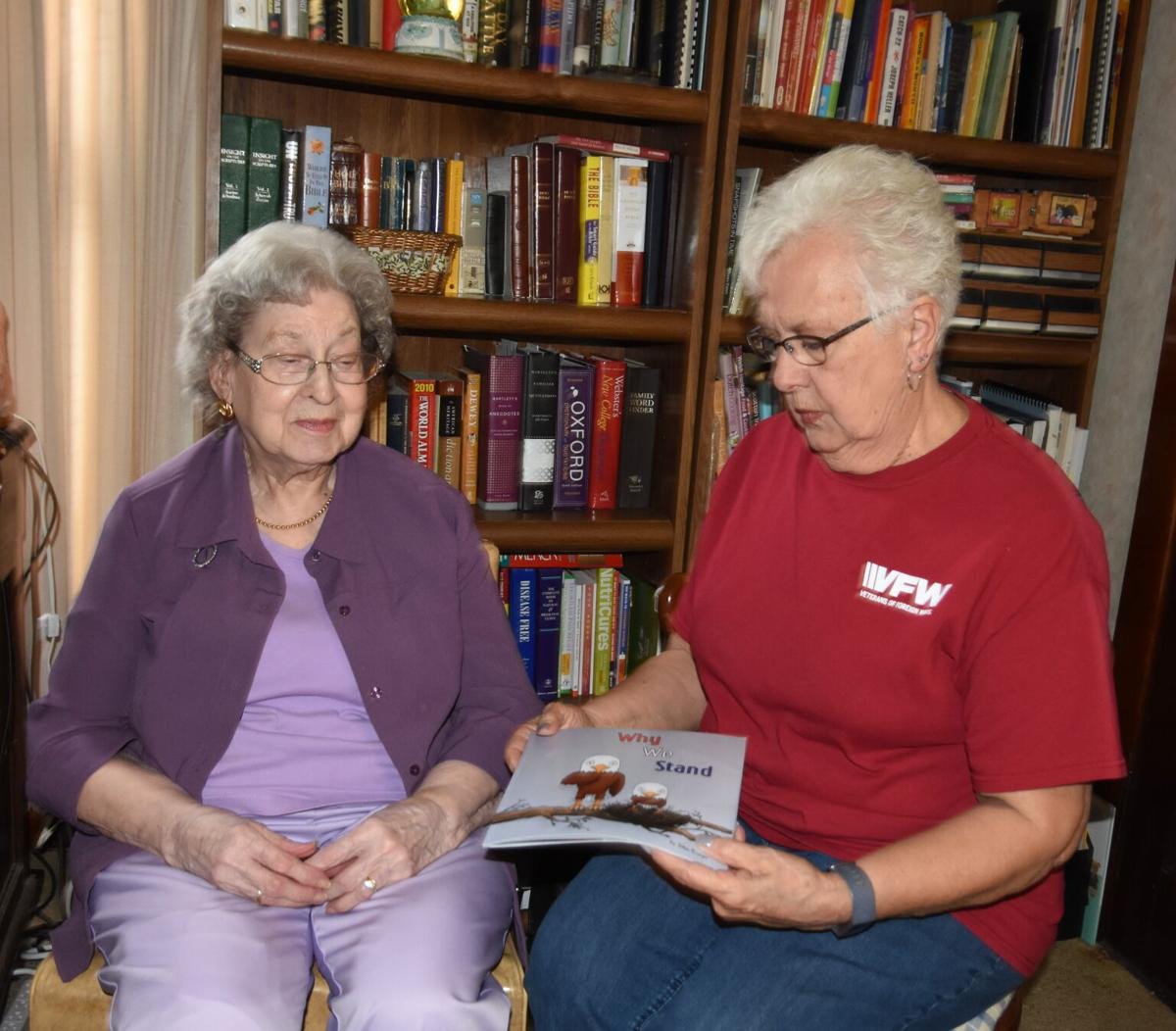 Bernice Mason (left) and Connie Hubbard were in Mason’s home library Thursday. Hubbard presented her with the children’s picture book “Why We Stand” to honor Mason’s decades of service to veterans and bright young minds. Mason will be treated to a 100th birthday drive-by Sunday afternoon and everyone is invited. 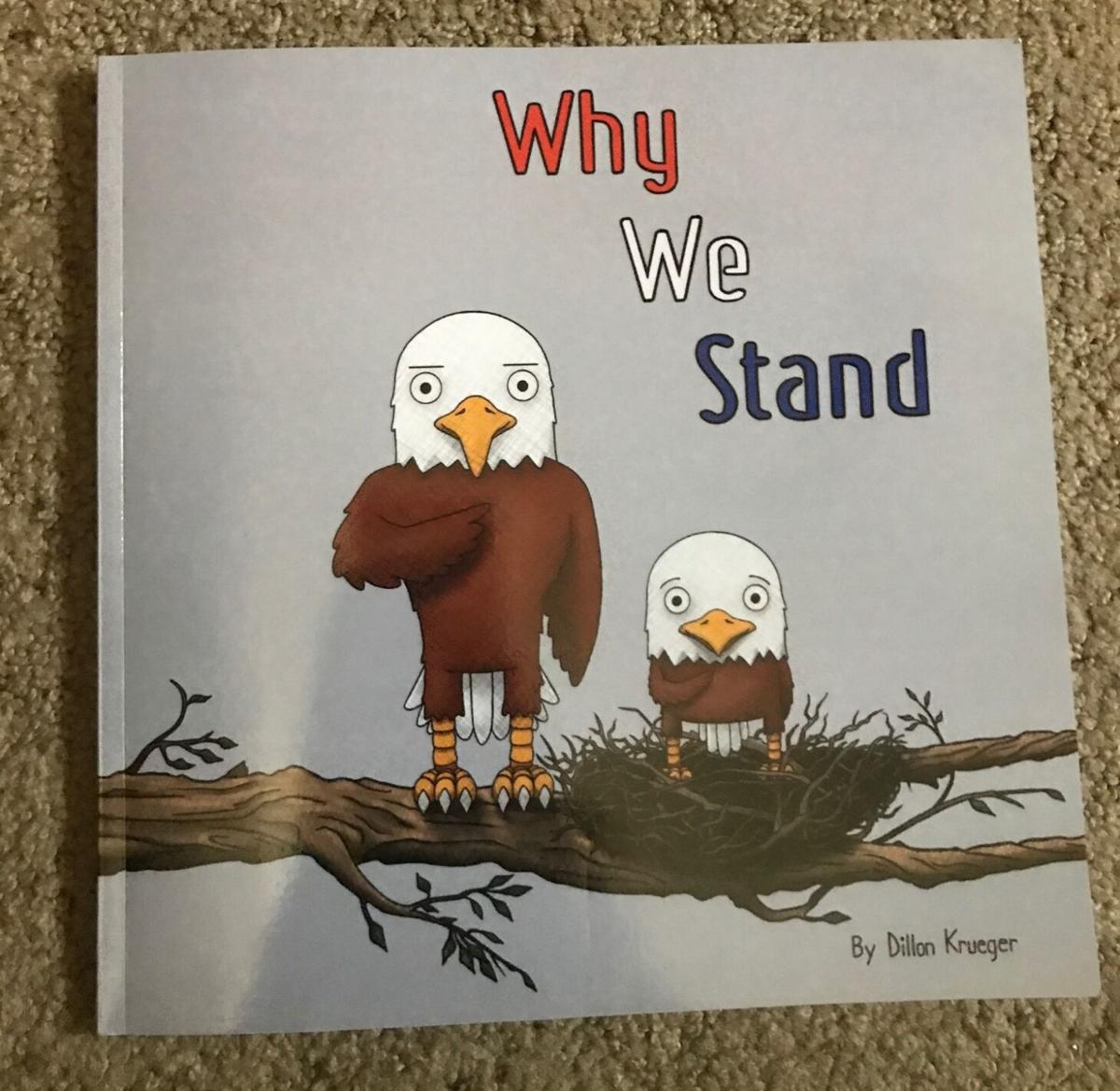 The children’s book “Why We Stand” about flag etiquette, respect and patriotism was authored by Dillon Krueger from Columbus. This copy will be donated to Kilgore Memorial Library children by the VFW Auxiliary to honor Bernice Mason.

YORK – Much has happened since October 25, 1920, and York resident Bernice Mason has been around for it all in person.

“Everybody was born at home in those days,” she said with a laugh, describing how the doctor came to her parents’ house to oversee the event.

Mason’s big day tomorrow will include a drive-by birthday celebration from 2-3 p.m. to which all are invited. The motorcade will meet at Greenwood Cemetery and drive past Mason’s nearby home from west to east. She will be outside to wave ‘Hello’ from a proper social distance.

Speaking Thursday in her home, Mason chuckled and suggested, “I may be the longest continuous subscriber” to the York News-Times, She has received the paper since her arrival in York with husband Kenny, a veteran of the European Theater in World War II, in` 1946.

Kenny died in 2008 from complications of Alzheimer’s Disease.

Mason’s 34 years of service to the kids of York at Kilgore Memorial Library dates to 1968 as children’s librarian.

“I haven’t given up on my books, as you can see,” she said with a smile and a gesture toward a nearby cabinet stuffed full. However, “Recently, I have been donating books to the Henderson Health Center” where a family member is employed.

“I loved all ages of the children,” she said of her three-plus decades at the library. “In the later years” libraries “were promoting reading to infants and toddlers,” which was right down her alley.

“I especially loved the pre-school story hours” with kids from local daycare providers. Head Start youngsters would come on a regular basis and “I really liked them,” she said, “and I loved the teenage volunteers. They were just fun for me to deal with.”

In its heyday, she said, Summer Reading Camp would draw as many as 300 kids which required a small army of willing teens to manage.

But this lively senior citizen is a computer-age lady, too … or at least she was.

Mason dutifully purchased one at age 90 and, “Mostly played with it for eight years.” The best and most useful thing about it, she came to learn, was the amazing source of global information we know as Google. “After eight years” she said, “the computer died. I didn’t replace it. I thought I was too old to learn a new one.”

A copy of the picture book ‘Why We Stand’, written by young father Dillon Krueger of Columbus and dedicated to his two sons, is designed to teach growing young minds why and how to honor and respect flag and country.

With the pandemic, she said, “We’re not making a big deal” of her birthday, however that was said before she had been told of Sunday’s rolling party in her honor.

“Tell him what you want for your birthday,” coached Hubbard, clearly already aware what the answer would be.

“With a twinkle in her eye and a big grin Mason answered, “All I want is a Runza. A Runza and a soft-serve cone. That’s all I want.”

Will she get it? Smart money says don’t bet against it.

Sheriff’s department getting reports of new type of scam

YORK – The York County Sheriff’s Department has received two reports in recent days of what appears to be some type of new scamming effort, Sh…

YORK – The York Board of Health will be holding a meeting next Tuesday to discuss the possibility of passing a mask mandate for the City of York.

YORK – This week, Steve Postier, who was recently elected to a seat on the city council, asked for his residential/business property to be ann…

YORK – Six COVID-related deaths have been reported in the Four Corners Health District.

YORK – Whitney Haack, 34, of Fairmont has been formally charged with possession of methamphetamine, a Class 4 felony, and the case has been bo…

YORK – The Four Corners Health Department is reporting 123 new cases of COVID-19 in the health district in the past three days (Nov. 21-23).

More than 100 friends and loved ones lined the halls of Immanuel Medical Center to bid farewell to the nurse.

Community members give thanks in 2020

Bernice Mason (left) and Connie Hubbard were in Mason’s home library Thursday. Hubbard presented her with the children’s picture book “Why We Stand” to honor Mason’s decades of service to veterans and bright young minds. Mason will be treated to a 100th birthday drive-by Sunday afternoon and everyone is invited.

The children’s book “Why We Stand” about flag etiquette, respect and patriotism was authored by Dillon Krueger from Columbus. This copy will be donated to Kilgore Memorial Library children by the VFW Auxiliary to honor Bernice Mason.