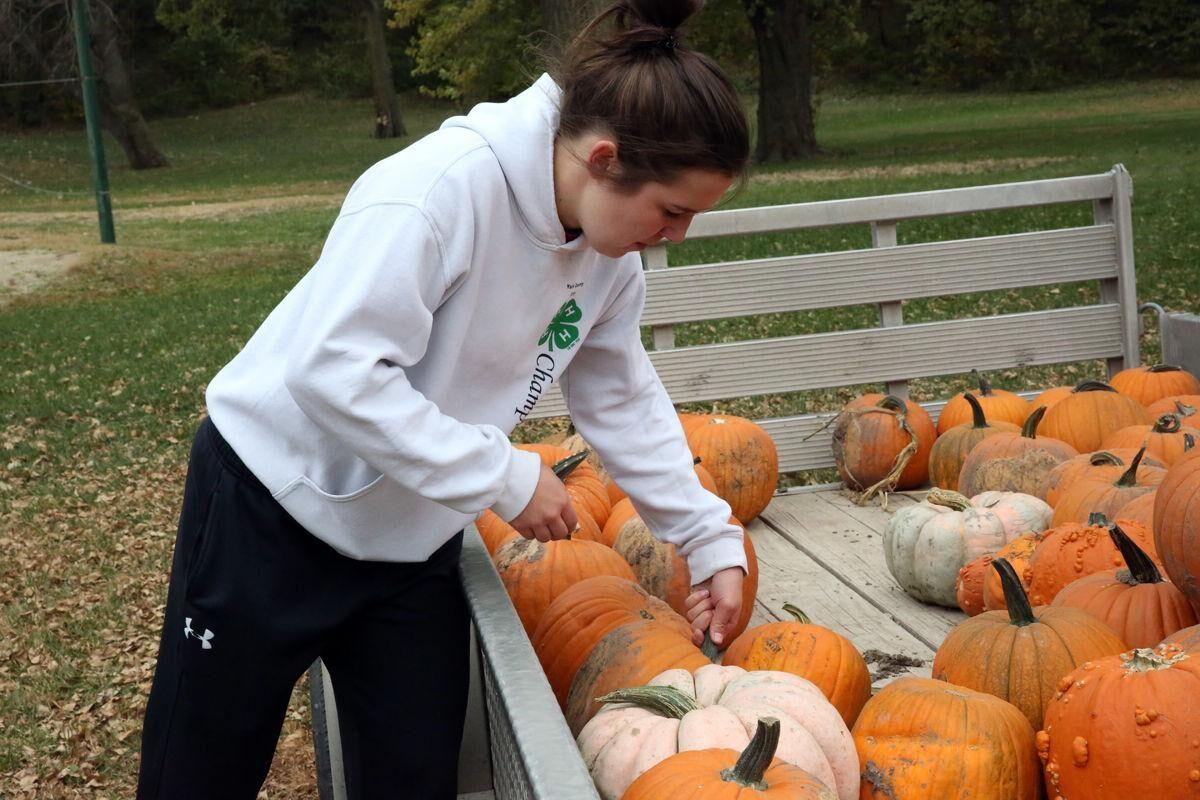 York FFA advisor Rachelle Staehr reaches for a pumpkin during last year’s York FFA Carve Out Cancer 5K. Carving your own pumpkin – included in the registration fee – tied the season with Breast Cancer Awareness Month. This year’s 5K, which includes a pumpkin and then some, will also raise money for the cause. 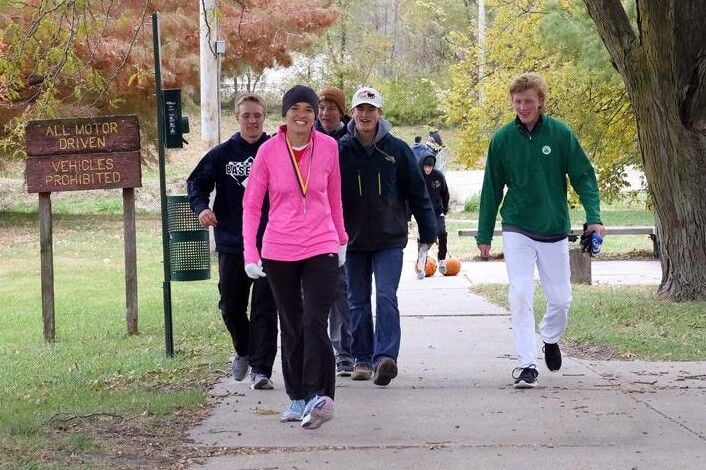 Breast Cancer Awareness Month. York FFA is again having the event, open to anyone – even if running or walking isn’t your thing.

YORK—Breast cancer, like any other type of cancer, is expensive; but every fundraiser – large or small, money or item – can make an impact on a cancer patient’s life.

York FFA has rallied around this cause in observance Breast Cancer Awareness Month (October). The group has organized a 5K run/walk Saturday, October 24 to raise money for Velvet’s Totes for Hope, a nonprofit that supports breast cancer fighters, survivors and their families. Totes for Hope’s mission is to minimize the stress and anxiety treatment days, by providing a tote stuffed with items a might want or need during the difficult, often draining treatment. The aim Totes for Hope is to uplift spirits and to support – and so is York FFA’s.

“A lot of people don’t have a lot of knowledge about how this actually affects patients and their families,” said Rachelle Staehr, York FFA advisor.

Sophomore York FFA member Cole Schmid said any way cancer patients can be helped is important. “It’s good that FFA is doing this – breast cancer is a well-known cause,” he said.

Treating breast cancer can cost well over $100,000. A 2016 study posted on the U.S. National Institutes of Health website states that costs are largely dependent on what stage of cancer the patient is in. Within two years, the study found, the average costs allowed by insurance companies for Stage I can be over $60,000 while Stage IV on average is covered over $180,000. Treatments can far exceed these insurance numbers, especially considering cancer expenses the average person might not think of.

A tote filled with items showing someone cares can make a cancer patient’s day.

York FFA’s cause is about showing breast cancer patients they are loved – even if the recipient of the Tote for Hope doesn’t know the person making the donation. The students and their advisors have decided on a $750 fundraising goal. As of October 22, Carve Out Cancer had about 20 people registered. Registration is online until October 23, but Staehr said they would accept registrations the day of the event. “If registering the day of, we ask that they come at 8 a.m.,” she said. Running or walking isn’t required to participate in the event. Registrants will be treated to breakfast and a group pumpkin-carving session.

Schmid said that while breast cancer hasn’t yet affected anyone he knows first-hand, that doesn’t make the cause any less important to him. “It’s scary to know anybody can be affected by this.”

Breast cancer is a costly disease physically, emotionally and financially. York FFA invites you to show support in their 5K Walk/Run “Carve Out Cancer.” Registration for the Saturday, October 24 fundraiser can be submitted until October 23, but registrations will be accepted on-site the day of the event at 8 a.m. The donation gets participants a t-shirt, a breakfast served up by FFA members, a pumpkin for carving and a spot in the (optional) race. The 5K Walk begins at 8:30 a.m., the 5K Run 9 a.m. at York’s Harrison Park. Register at www.YorkFFA.com under “Carve Out Cancer 5K” or click here.

Community members give thanks in 2020

YORK – Based on the goings-on in 2020, what people are thankful for this Thanksgiving have a bit of a twist from Thanksgivings of years past.

UTICA – An effort to ensure people are healthy worldwide has come to Centennial Elementary School.

When to shop: Search store hours for Thanksgiving and Black Friday

Many retailers are changing their Thanksgiving store hours for 2020. Find out which stores are open when.

YORK – Salvation Army Red Kettles have popped up in York and beyond, volunteers’ bells ringing in the holiday season.

How to conquer Black Friday from your couch

A Tennessee police department is mourning the loss of Sjaak, a K-9 officer that died after being shot three times when a man opened fire on a patrol car.

This craft kit makes the perfect gift for friends (or yourself).

Test your Turkey Day Knowledge with this Thanksgiving Trivia quiz!

Buying Guide: These two player board games are perfect for small households

Staying at home doesn't have to be boring.

The best-paying US cities for IT administrators

The increase in remote work means that U.S. workers are relying even more on technology, which could have an effect on the demand for IT administrators—a group that was in demand even before COVID-19.

York FFA advisor Rachelle Staehr reaches for a pumpkin during last year’s York FFA Carve Out Cancer 5K. Carving your own pumpkin – included in the registration fee – tied the season with Breast Cancer Awareness Month. This year’s 5K, which includes a pumpkin and then some, will also raise money for the cause.

Breast Cancer Awareness Month. York FFA is again having the event, open to anyone – even if running or walking isn’t your thing.