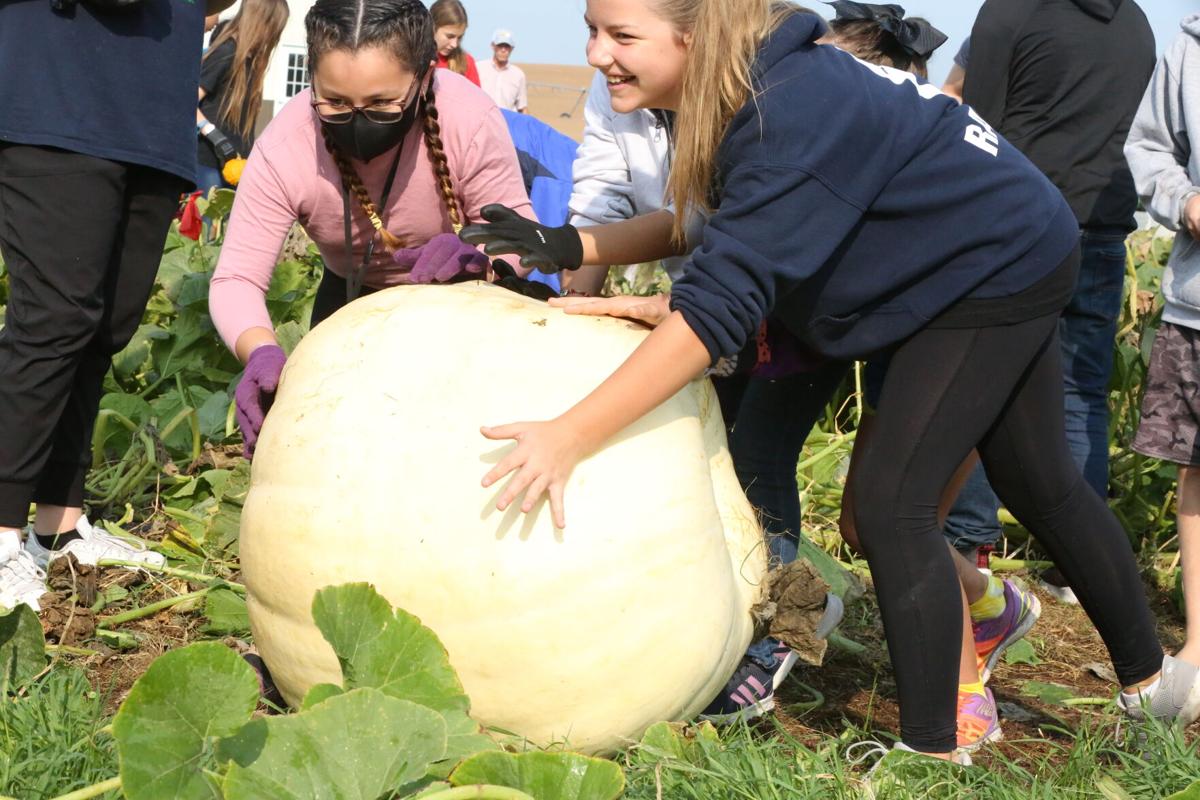 St. Joseph Catholic School students Maky Jimenez (left) and Josie Rauert muscle a giant pumpkin towards a flatbed trailer. Pumpkins – most not as massive as the one pictured – will be available at the annual pumpkin sale fundraiser. 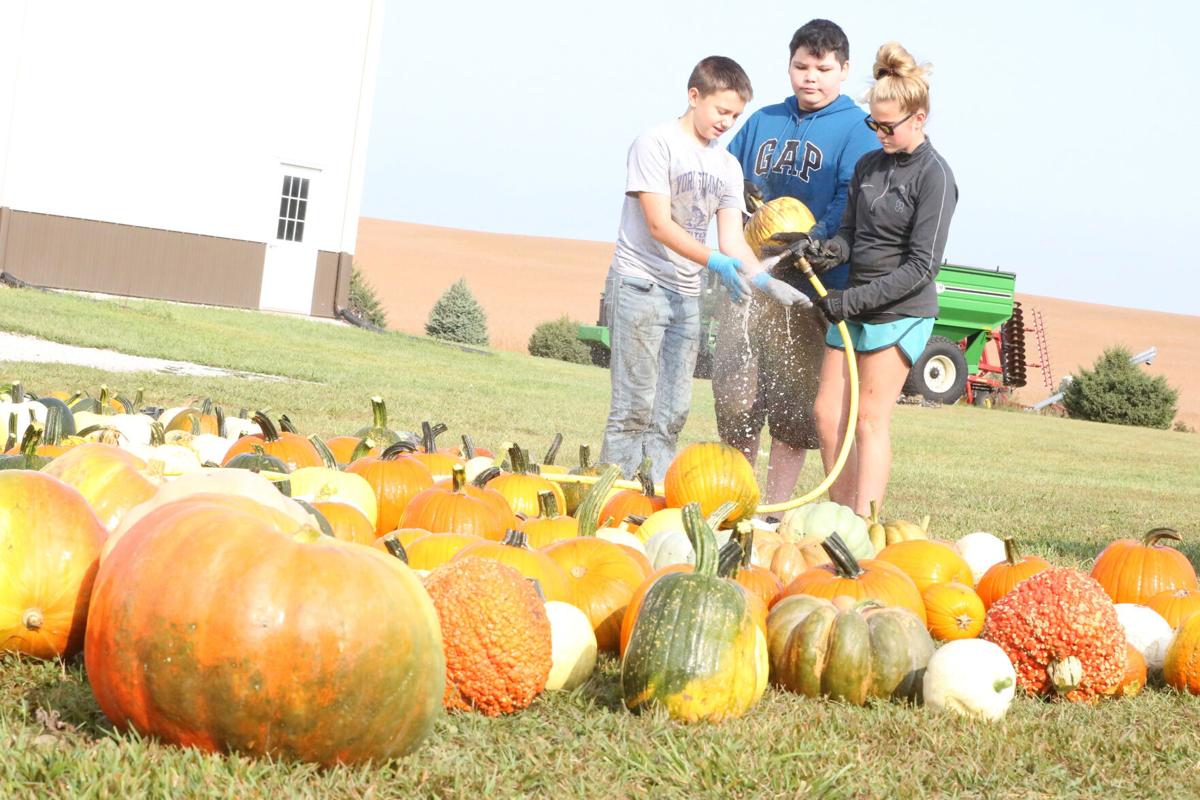 Another sure sign of fall, orange orbs are peeking from between their thick vines – the massive pumpkin patch at Brad and Patty Morner’s farm being no exception. But what to do with all those fall favorites?

“We grew too many,” Brad Morner said. “We decided to let the kids at St. Joe’s school sell them – make some money for their school.”

“It is our biggest fundraiser that helps pay for different kinds of things, including our field trips,” said Austin Sipe, St. Joseph Catholic School student.

Morner said that the products of the patch have been sold for two years. “Last year we had the kids out picking, and we had two trailer loads,” Morner said.

Fall 2020 is bigger and better than ever, Morner said, pointing out pumpkins with warts, squat green pumpkins and myriad other forms. He estimated 40-45 different varieties were planted. The Morner’s started seed-shopping in winter in search of new and unusual varieties. This year they scored some unique seed from a Backyard Farmer contributor. Morner said he anticipates gathering 4-6 trailer loads. “This year we’ve expanded; we have about three times the amount of pumpkins.”

“It was bigger than I expected,” said parent Laurie Lopez, as she scanned the scene. “I think it will just continue to grow.”

Over twenty St. Joseph Catholic School middle-schoolers, parents and teachers took the school’s bustling activity outside, converging on the Morner’s pumpkin patch, ripping out vines to reveal hidden squash and rinsing them once found. Some were a bit easier to find, like the huge white pumpkin so large it took several students to roll it out of the patch. “It’s just fun to watch,” Morner said, watching the busy students comparing pumpkins and sharing the work.

“It’s good for them to work and do this together,” said Steph Peyatt, St. Joseph’s grades 5-8 English Language Arts teacher. Students had a system for preparing their produce, gathering, washing, sorting by size and loading onto the trailers, executing the process quickly and efficiently. “We’re not having to tell anyone what to do,” said Teresa Kathman, St. Joe’s middle school math and science teacher, who was on hand to help with the endeavor.

The students’ involvement goes beyond the expanse of the Morner’s patch; they help set prices, advertise and serve as salespeople. “It really teaches them how to plan things,” Peyatt said. “We love that they do the work and reap the rewards.”

“It speaks to the quality of children we grow at St. Joe’s.”

See and shop for the unique pumpkins large and small at the St. Joseph Catholic School Pumpkin Sale, 3:30 p.m. - 7 p.m. Friday, September 18 at the school. All proceeds go to the school.

The revival of the Yorkfest Prayer Breakfast was deemed successful, buoyed by a prominent guest.

YORK—Fifty years a vault filled with York Centennial documents and other items rested beneath the cement outside of the York Community Center.

How to stop glasses from fogging up when wearing face mask

It's a pesky problem: As soon as you strap on your cloth face mask and head out the door, your glasses fog up. But there's a simple fix for that.

It’s been nine months since the world learned of a new coronavirus. Here are 10 things science has learned about COVID-19 and the disease it causes.

Buying Guide: People who like to sleep in total darkness will love this alarm clock

No more phone scrolling at 2 AM.

Could you pass a US civics test?

Several states require high school students to pass a civics test in order to graduate. Which got us to thinking — how difficult would these questions be? In order to become a naturalized citizen, applicants must correctly answer 6 of 10 questions from the list of 100 questions. Here is a sampling of some of those questions. We re-worded them a bit — test yourself!

5 ways the COVID-19 pandemic could affect your college application

An admissions dean seeks to take the worry out of applying for college when traditional things like grades, standardized tests and extracurricular activities have been disrupted by COVID-19.

The 15 best-paying low-density cities in the U.S.

For families seeking a less crowded place for health and safety reasons, but also wanting to maintain a comparable salary, there are several locations to consider, especially in the South and the Midwest.

“It was perfect timing when I got it,” Kathy Johnson said, cradling a rust-orange kitten just retrieved from one of the latest additions to he…

St. Joseph Catholic School students Maky Jimenez (left) and Josie Rauert muscle a giant pumpkin towards a flatbed trailer. Pumpkins – most not as massive as the one pictured – will be available at the annual pumpkin sale fundraiser.