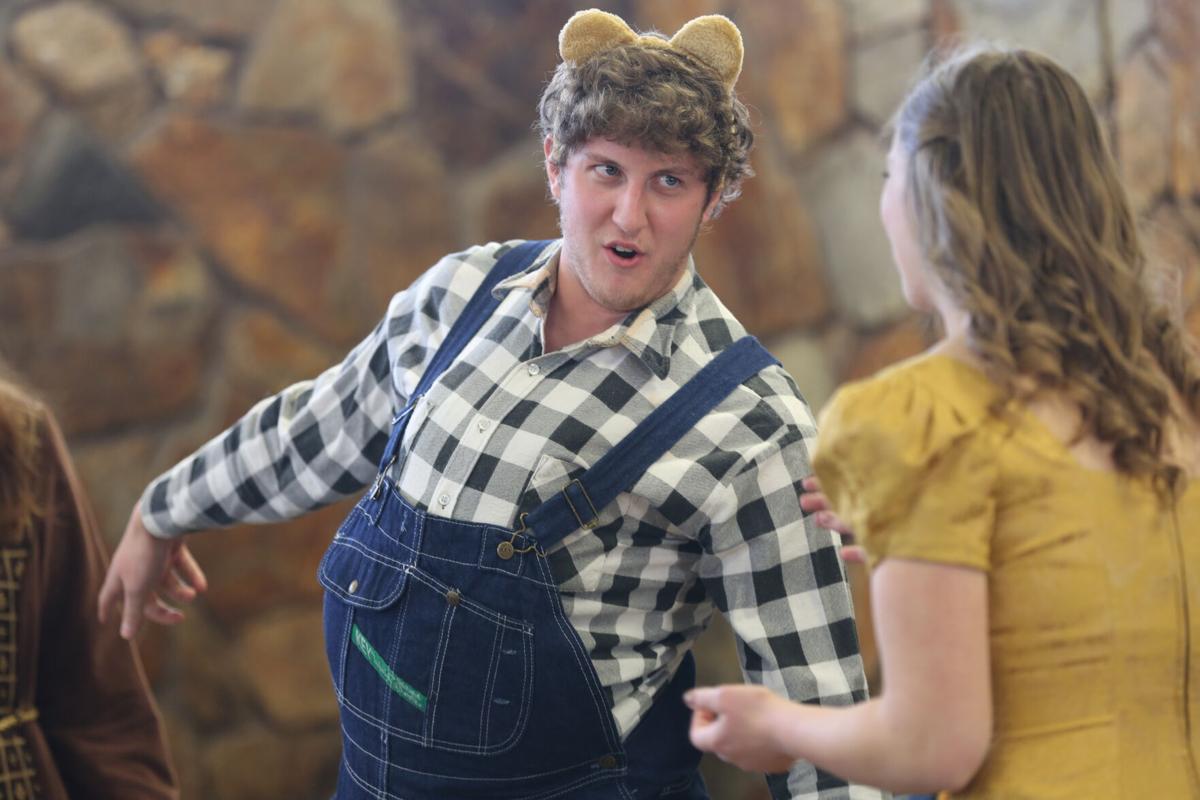 “Papa Bear” (Chris Martens, facing) gives “Goldilocks” (Kelsey Beck) a piece of his mind during the York College Children’s Theatre’s improv interpretation of “Goldilocks and the Three Bears” at Kilgore Memorial Library. The troupe was a special feature in this week’s edition of Mr. and Mrs. B.’s story time. 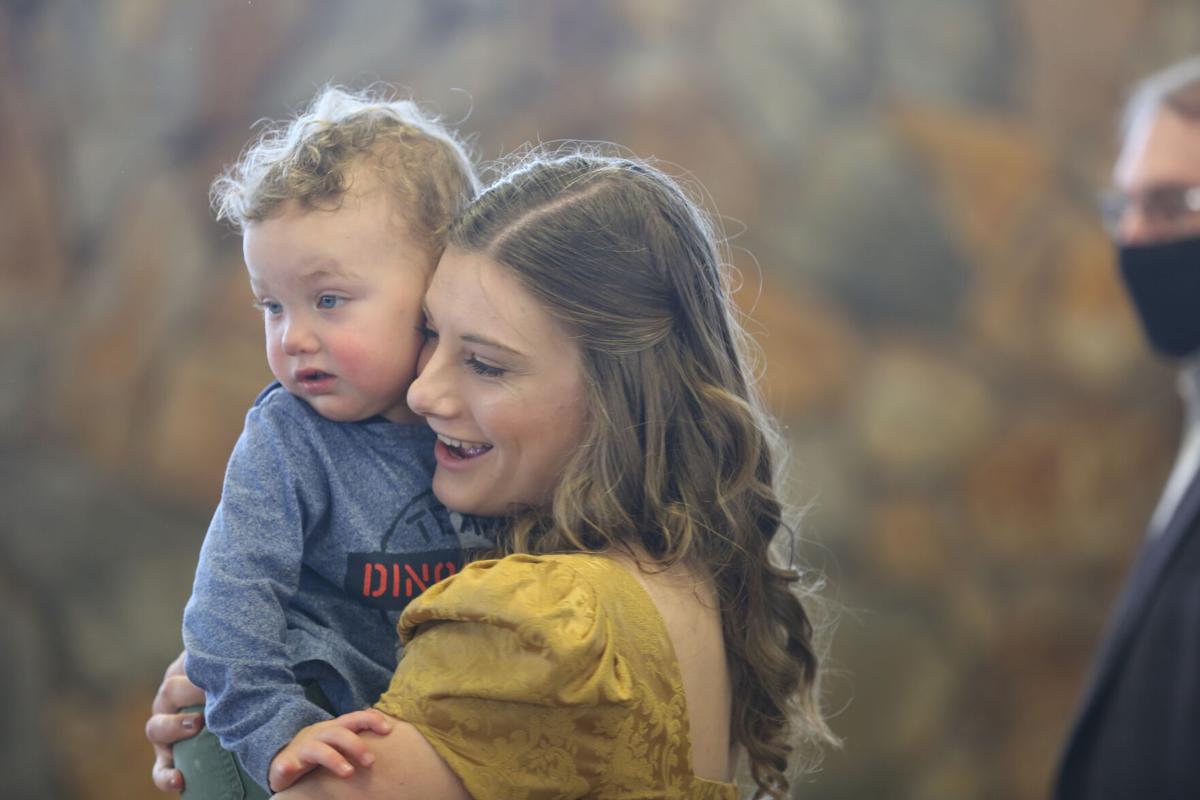 YORK – If you’re a regular visitor to Kilgore Memorial Library’s Facebook page, chances are you’re familiar with the antics and theatrics of story time with Mr. and Mrs. B.

The husband and wife team – also known as John I. Baker, III and Carol Baker – have been doing online story times for several months in response to the COVID-19 pandemic. “It’s the best way we can bring story time to kids right now,” Carol Baker said.

As entertaining as the awesome twosome is, there were a group of special guests who got in on the library’s popular broadcast: York College’s Children’s Theatre. The troupe is led by John Baker, who besides being one of Kilgore’s on-air personalities is a professor at York College.

Like almost everything else about life during the pandemic, the children’s theatre has had to adjust – and will be taking a similar route as Kilgore’s story time, posting their performances on YouTube. “This year it’s really hard to get into schools,” John Baker said. “Our mainstage shows will all be streamed.” Typically the children’s theatre travels to numerous schools sharing the joy of theatre in-person. While not the ideal catalyst, COVID-19 has brought about additional ingenuity to the performing arts. “I think the new ways we’re discovering to express ourselves make opportunities whenever we go back to what our ‘new normal’ is,” John Baker said. “We’re trying to keep growing.” York College Children’s Theatre member Kelsey Beck said she agreed. “We’re adapting and having fun.”

Fun was certainly being had for viewers Tuesday as they were treated to an improv performance of “Goldilocks and the Three Bears” following Mr. and Mrs. B’s reading selection and fun mask-themed song performance. A spot was cleared on Kilgore’s “set” for the York College students’ retelling. “Improv is not my thing, but it’s still fun,” Beck said. Not having a full, in-person audience can be a challenge, too, not having children’s smiling and expressive faces to play off of, Carol Baker said. Having story time online has seen some tweaking the past few months, as the B.’s adjust to and embrace the many facets of performing for an online audience.

John Baker said the Children’s Theatre will visit Seward’s library. Carol Baker said she hoped her husband’s crew would come back to Kilgore with their talent and theatrical magic. “Having the theatre here brings the story to life,” she said.

Mr. and Mrs. B. also bring stories to life, the duo exercising their own storytelling chops for Facebook viewers every Tuesday. Following the troupe’s performance, plus a good-bye song for viewers (“See you later, alligator!”), the spare “set” was taken down and packed up, headed back to York College campus. The entire troupe pitched in, energized by a successful performance. As he watched the York College Children’s Theatre clear the performing space, John Baker said he was glad to have his troupe take center story hour stage. “They’re the stars; I just read the story.”

To watch Mr. and Mrs. B.’s story time live, visit Kilgore Memorial Library with your mask, ready to socially distance and have fun 11 a.m. Tuesdays. You and your favorite young book lover can also view from the comfort of home live on the Kilgore Memorial Library Facebook page at that time. Past story times are also available to view. Keep an eye on YouTube, too, as York College Children’s Theatre will be posting their own performances in the near future.

Watch Now: Tips to get the most out of your home security system

Watch Now: Tips to get the most out of your home security system

Things to avoid in the kitchen with toddlers

Things to avoid in the kitchen with toddlers

Student Loan Deferrals Can Impact Your Credit: Here’s How

Student Loan Deferrals Can Impact Your Credit: Here’s How

YORK – There has been a big-time baby boom at York General Hospital, including six babies being brought into the world within 27 hours.

YORK – Bowling is much more than a heavy ball launched towards a target of ten – just ask members of York’s high school bowling team.

YORK – Cars of every make, model and year waited in lines three cars deep winding around and through the parking lot of the Holthus Convention…

More than just a pretty #bookface

YORK – Across the nation, libraries are striving to take their services and promotions beyond the brick-and-mortar, many utilizing social medi…

1920s houses are works of art and a piece of Omaha history, fans say

Each of Omaha's 1920s houses tell a story about their previous owners. And they fetch top prices, too.

3 statement details to consider for your wedding dress

When it comes to what dress you’ll adorn on your big day, it is all about the details.

On-trend cake designs for any style of wedding

Amazon quietly changed its app icon after some unfavorable comparisons

Only iOS users in the United Kingdom, Spain, Italy and Netherlands saw the Hitler-esque logo over the past few weeks.

Here's a look at which biblical names have stood the test of time.

“Papa Bear” (Chris Martens, facing) gives “Goldilocks” (Kelsey Beck) a piece of his mind during the York College Children’s Theatre’s improv interpretation of “Goldilocks and the Three Bears” at Kilgore Memorial Library. The troupe was a special feature in this week’s edition of Mr. and Mrs. B.’s story time. 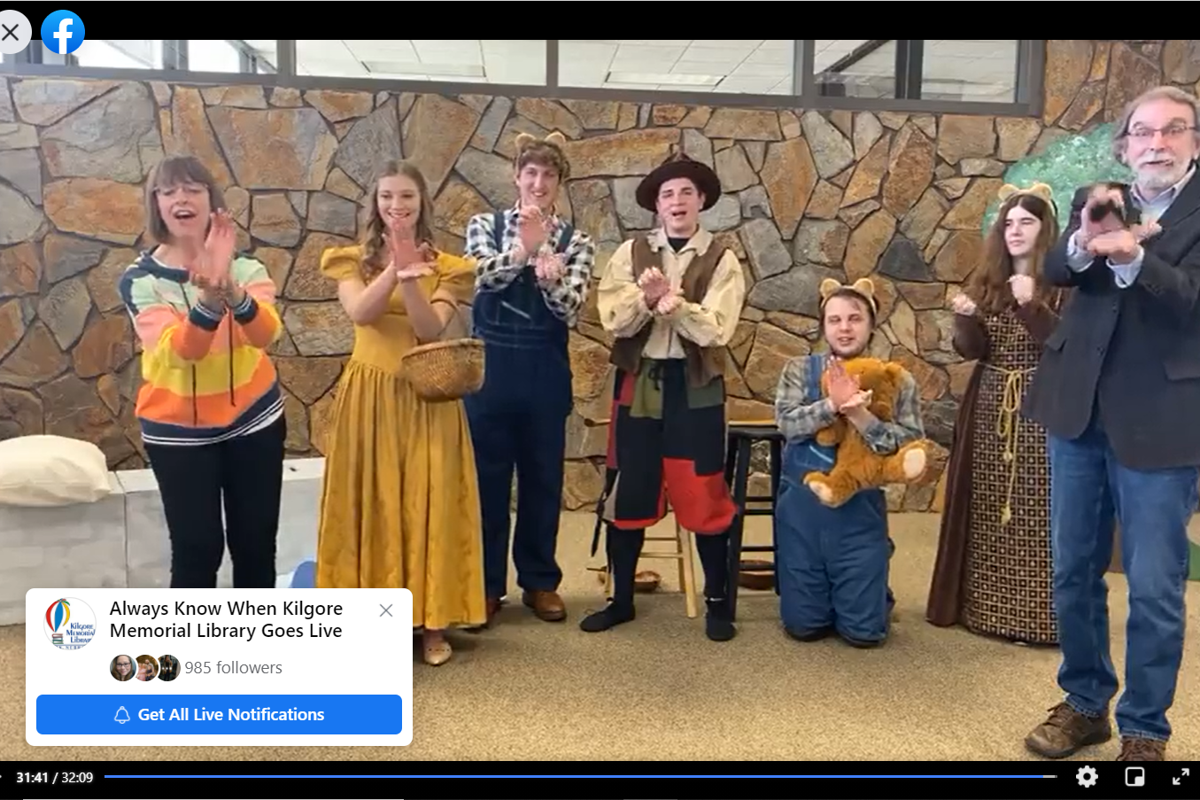