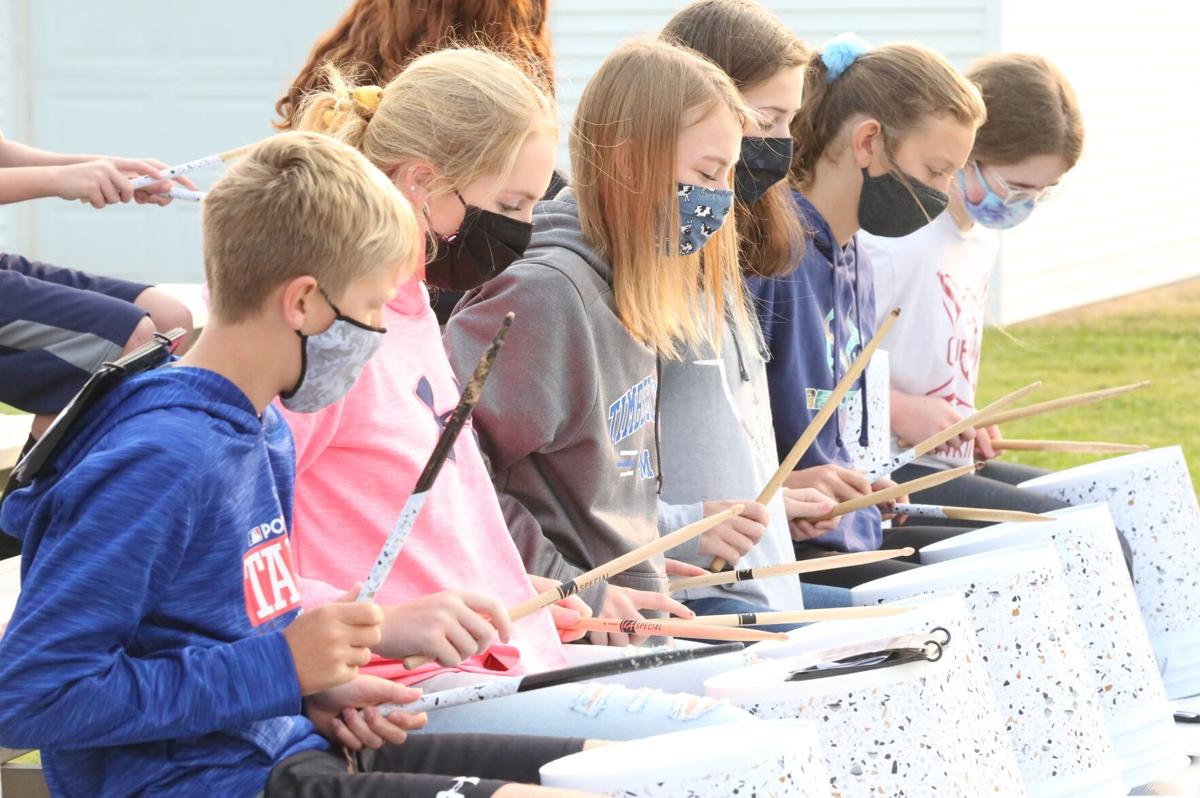 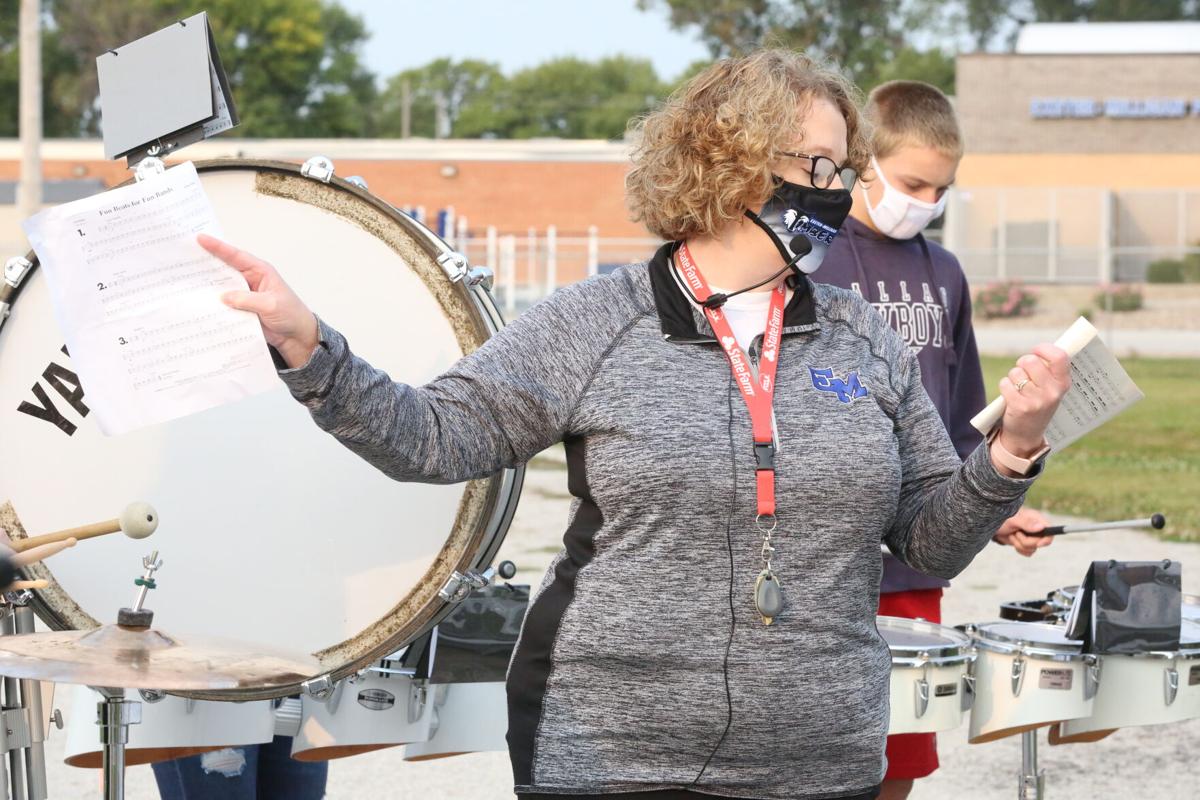 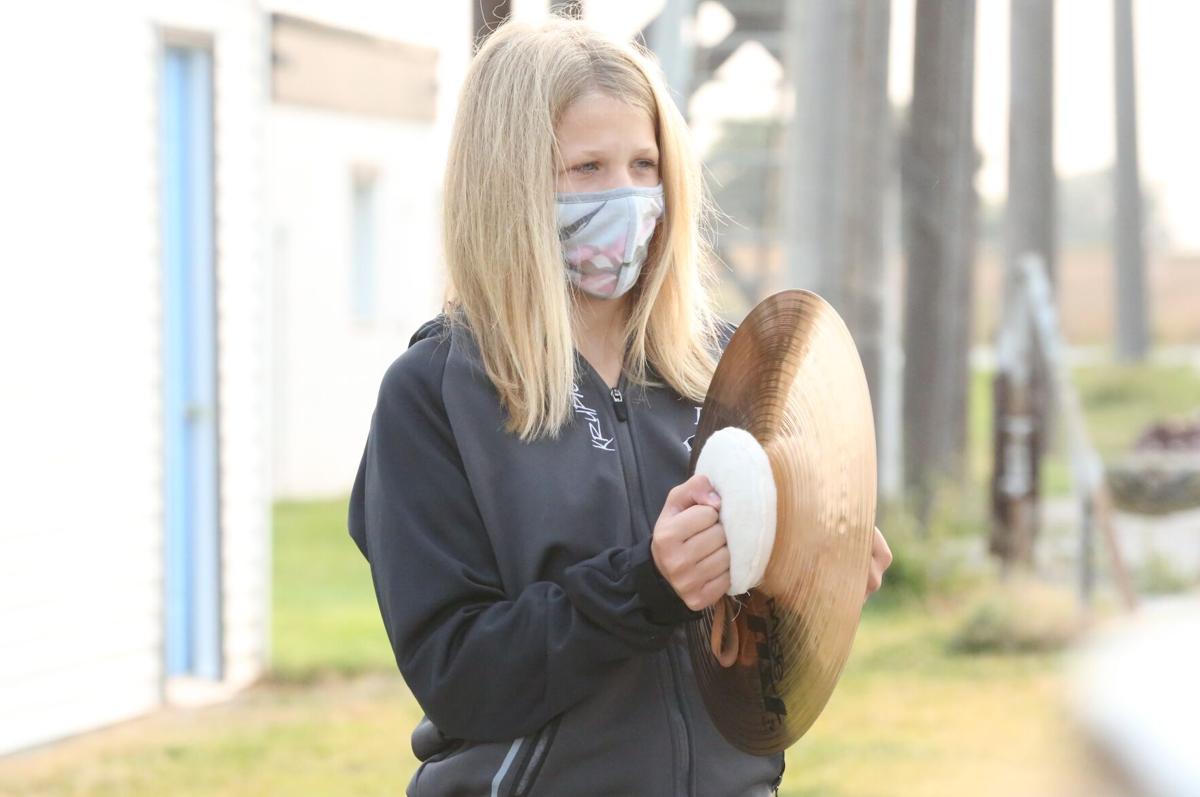 Buckets? The household staple might seem out of place, but tapping drumsticks on the buckets decorated with school spirit is a good coronavirus-era substitute for wind instruments, said Angie Murphy, EM band director.

Murphy said some of her 7-12 band students are less-than-enthused to give up trumpets and clarinets for a band-sized percussion ensemble, but EM eighth-grader Carter Milton is perfectly happy with the coronavirus-influenced modification. “I think it’s awesome that we’re doing this, because most schools don’t get this opportunity,” Milton said.

Bands across the nation are struggling to keep their bands playing on while staying safe from COVID-19. “I do hope to transition into normal band before too much longer,” Murphy said. Part of that transition will be special masks for wind instrument players, which have space allowing for mouthpieces. Additionally, Murphy said she’s heard of wind instrument add-ons like pantyhose stretched across instrument openings. Fine, but pantyhose cost money, and once stretched can’t be used again, according to studies Murphy has read. She said she’s considering coming up with a modification made of interfacing instead, but that’s a lot of sewing to outfit her 7-12 band numbering 45 performers.

Continuing to play is more about maintaining curriculum – it’s what the students want. Milton said that while he’s disappointed he and his bandmates can’t play their regular instruments, he likes the band’s COVID-19 setup. “This is just as fun,” he said.

Inspired by her and her students’ love of playing, Murphy is racking her brain to think of other modifications to keep the EM 7-12 band playing on. In the meantime, the sound of a cadence and well-kept rhythm resonates around the Exeter site’s football field. The endeavor will culminate in a performance during the Exeter-Milligan-Friend Bobcats football game against Tri-County Friday.

Sign up now to get the most recent coronavirus headlines and other important local and national news sent to your email inbox daily.

YORK -- Be transported back in time through the wild and wacky journey of theatre through the years from Aristophanes to Emile Zola. The York …

Oscar-winning actor Jeff Bridges says he is being treated for lymphoma. Bridges' Hollywood career stretches over six decades and has starred in over 70 films including "True Grit" and "The Big Lebowski."

New this week to TV, streaming and more: The Boss, Billie Eilish, Borat and 'Bad Hair'

Here's a look at what's arriving on TV, streaming services and music platforms this week.

A group focused changing on the conversations about immigrant characters and storylines on television in Hollywood's writers' rooms hopes to pave the way for policy changes in Washington.

The Billboard Music Awards took place Wednesday with Kelly Clarkson as the host. Here's the full list of nominees and winners.

This week on our film podcast 'Just to be Nominated,' we're talking about Animation!

Get in touch with your inner child because this week on our film podcast 'Just to be Nominated' we're talking about some of the the best Animated movies ever made!

WOODLAND HILLS, Calif. (AP) — A Tennessee rapper who boasted in a music video about getting rich from committing unemployment fraud was arrested Friday in Los Angeles.

You May Think You Know 'Rebecca,' But Netflix's Adaptation Proves You Don't

Gregory Maguire says his latest book 'is like comfort food'

Gifty new and unusual pandemic-proof games for the holidays

NEW YORK (AP) — The pandemic has proven there's no shortage of games to keep families, couples and kids amused. The classics are ever-present, but a range of new or off-the-beaten-track gift entries are available.