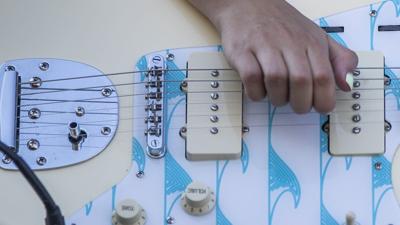 Summer fun is in the stars, the stadiums, the swimming pools, the parks and the pavilions this year.

After a tough stretch, we’re ready to do all the things we couldn’t do in 2020.

» If festivals are your thing, you’ll be busy every weekend, starting with Taste of Omaha.

» Musicals are returning to suburban stages: “The 25th Annual Putnam County Spelling Bee” will be at the Papillion-La Vista Community Theatre and “The Addams Family” will be in Ralston.

» The College World Series is back at full capacity. There’s nothing like a night at the ballpark. And don’t forget the Olympic Swim Trials.

» The schedule is filled with moonlight concerts on lush lawns (or artificial turf, in the case of country superstar Garth Brooks, who plays Memorial Stadium at the University of Nebraska-Lincoln on Aug. 14). Other acts coming to the area include Blake Shelton, Dashboard Confessional and Melissa Etheridge.

» Gallery hopping is one of the best ways to discover local and regional artists. Our listing makes it easy.

» Looking for adventure? Immerse yourself in a deep sea adventure with James Cameron as your guide. Love baseball? Get to know the greatest Black players of all time.

Get ready for all that and so much more in Nebraska this summer. Here’s what you need to know to stay on the go. The pace is up to you.

Summer fun: Check out these Nebraska fairs & festivals making a comeback after COVID

Mother and daughter at Waverlyfest, 2014

Getting wet at Waverlyfest parade, 2014

Clown at 2003 parade in Ralston

Kids on scooters at July 4 celebration, 2016

Cooling off during Friend parade, 2008

"Nelson Mandela: The Official Exhibition" is a global touring exhibition that "takes visitors on a personal journey through the life of the world's most iconic freedom fighter and political leader."