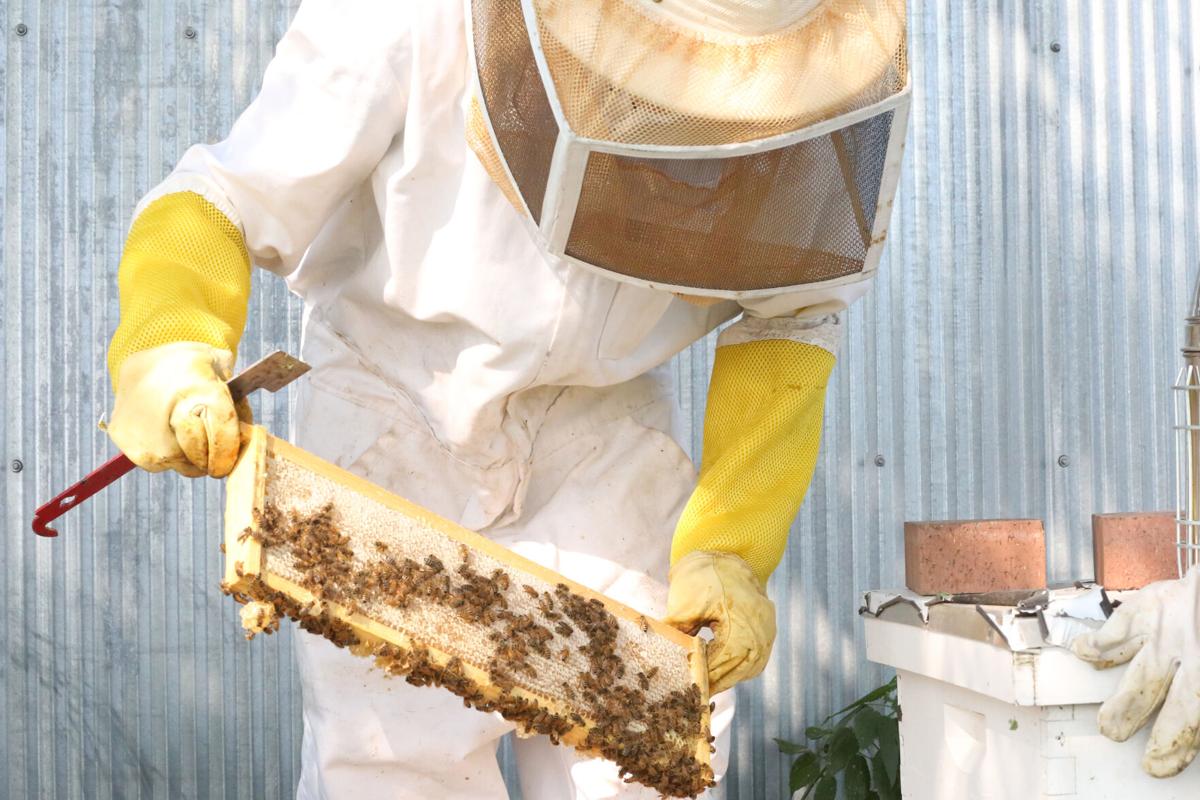 Madison Gerken lifts a section of her beehive to check on the bees’ health. Gerken and her family became beekeepers years ago when the McCool Junction High School graduate undertook beekeeping as an FFA project. 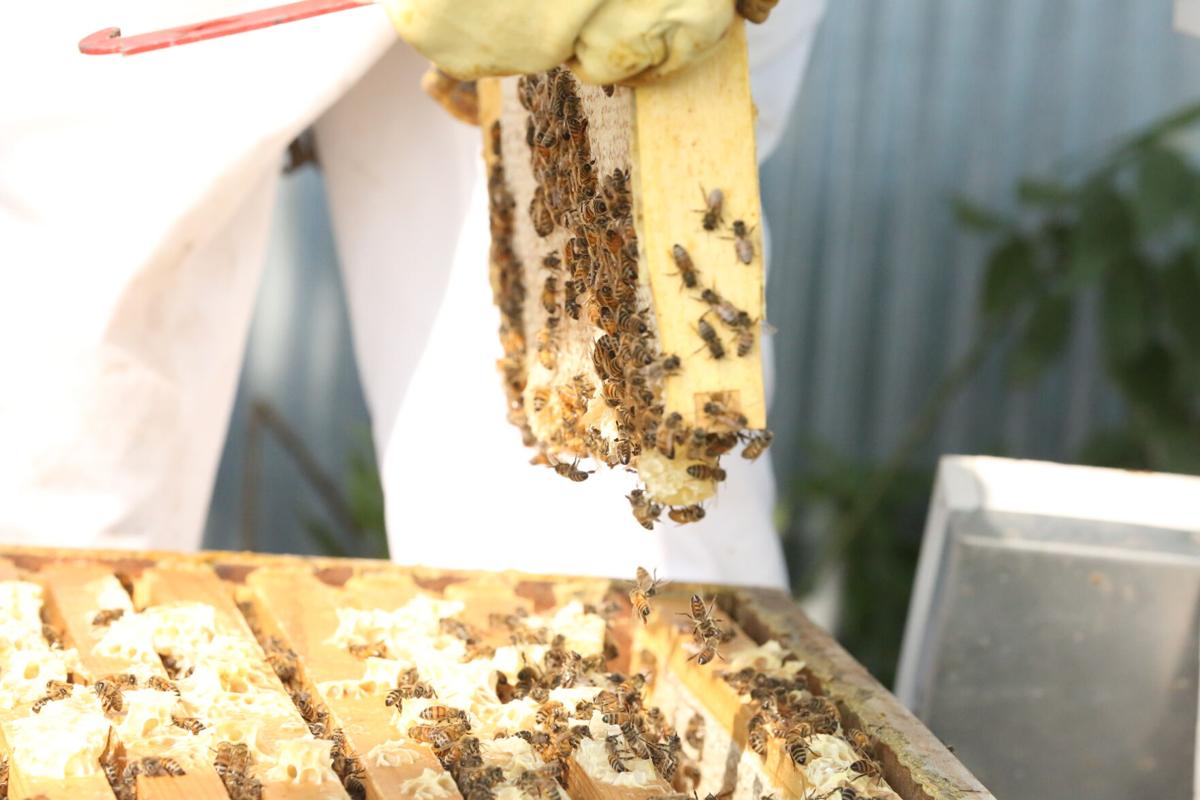 Bees, calmed by smoke, drop from a beehive frame while being checked on and treated for mites, which carry devastating parasites. These bees are housed in a hive managed by the Gerken family in McCool.

What started as Madison’s FFA Supervised Agricultural Experience (SAE) has turned from project to passion. Supervised Agricultural Experience projects like Madison’s beekeeping endeavors are meant to immerse students in a year-long project that enhances the participant’s knowledge of all aspects of the ag industry. Madison’s SAE has stuck around much longer, and her family is now included.

Madison acquired her first bees in 2017. Local beekeeper and farmer Roger Bailey helped her get started, and has guided the Gerken’s along the way. “He continues to check up on us now and then,” Madison said. Bailey has been a valuable resource in helping her establish her unique FFA project.

“We still learn as we go,” Madison said. The bees do some learning, too. “Two years ago we had to move our hives. A lot of them got confused, and it took quite a while for them to adjust,” she said. The flying, stinging insects can be very perceptive. “They can sense your emotions. If you just keep calm with them they usually don’t mind you being around.” While Madison keeps her cool, sometimes her father, Steve, gets in a rush, she said. “I’ve only been stung around five times. My mom and dad have had a lot more than that – more than they can count.”

Besides their sense of when threatened, Madison said bees also do a bit of measuring when they construct their honeycombs, lining up to figure out how far their beeswax needs to reach. “They’re actually very smart creatures,” Madison said.

Maintaining her hives is more than harvesting honey and keeping the swarms together. Treated strips are slid between the frames in an effort to ward off mites, which wreak havoc on bees’ health. Late summer is the ideal time to treat for these parasites, which spread diseases that – among other damage – can cause deformed wings and pupae cannibalization.

So far the Gerken’s have avoided such devastation. Still, Madison remains realistic. “It’s not always going to go how you want it,” she said.

Starter bees often come from other beekeepers; a few times area residents have found honeybee colonies where they don’t want them. The Gerken’s collect the swarms and relocate it to their hives on a remote, grassy patch near McCool.

Since her graduation from McCool Junction High School, Madison has enrolled in Hastings College, where she majors in biology and minors in psychology. She doesn’t plan on applying her degree to a beekeeping career (she hopes to become a physician’s assistant), but Madison said the family hobby will stick around.

Two area farms recognized for keeping it in the family

Two York County family farms have been recognized with 2020 Aksarben Farm Family awards – one farm in its 150th year, the other recognized for…

BRADSHAW — Almost as suddenly as Brian Johnson died, a team of farmers quickly descended on the Johnson Family’s crops to finish the job he ha…

YORK COUNTY -- Amy Bruch is a family farmer in heart, soul and mind.

YORK – In a 3-2 vote, the York County Commissioners gave their approval to a conditional zoning permit that will allow more than one dwelling …

York County farmer Amy Bruch has been appointed to the USDA National Organic Standards Board (NOSB). She is the first Nebraskan to serve on th…

Madison Gerken lifts a section of her beehive to check on the bees’ health. Gerken and her family became beekeepers years ago when the McCool Junction High School graduate undertook beekeeping as an FFA project.

Bees, calmed by smoke, drop from a beehive frame while being checked on and treated for mites, which carry devastating parasites. These bees are housed in a hive managed by the Gerken family in McCool.