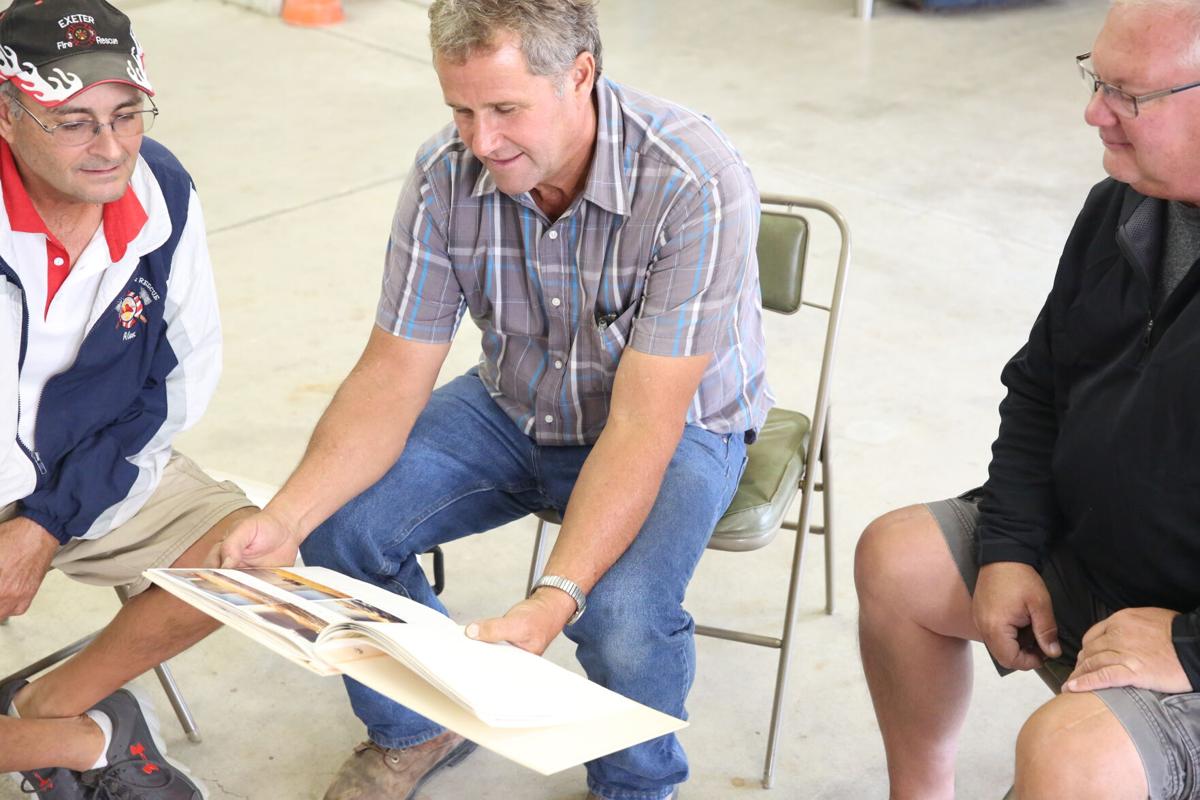 In 1993 Donny Manning (center) was trapped in a grain bin filled with corn. Two of many area volunteers in the rescue effort, Alan Michl (left) and Kenny Harre (right) swap memories with Manning. Manning’s wife, Joanie, put together a scrapbook of the rural Exeter “miracle.” 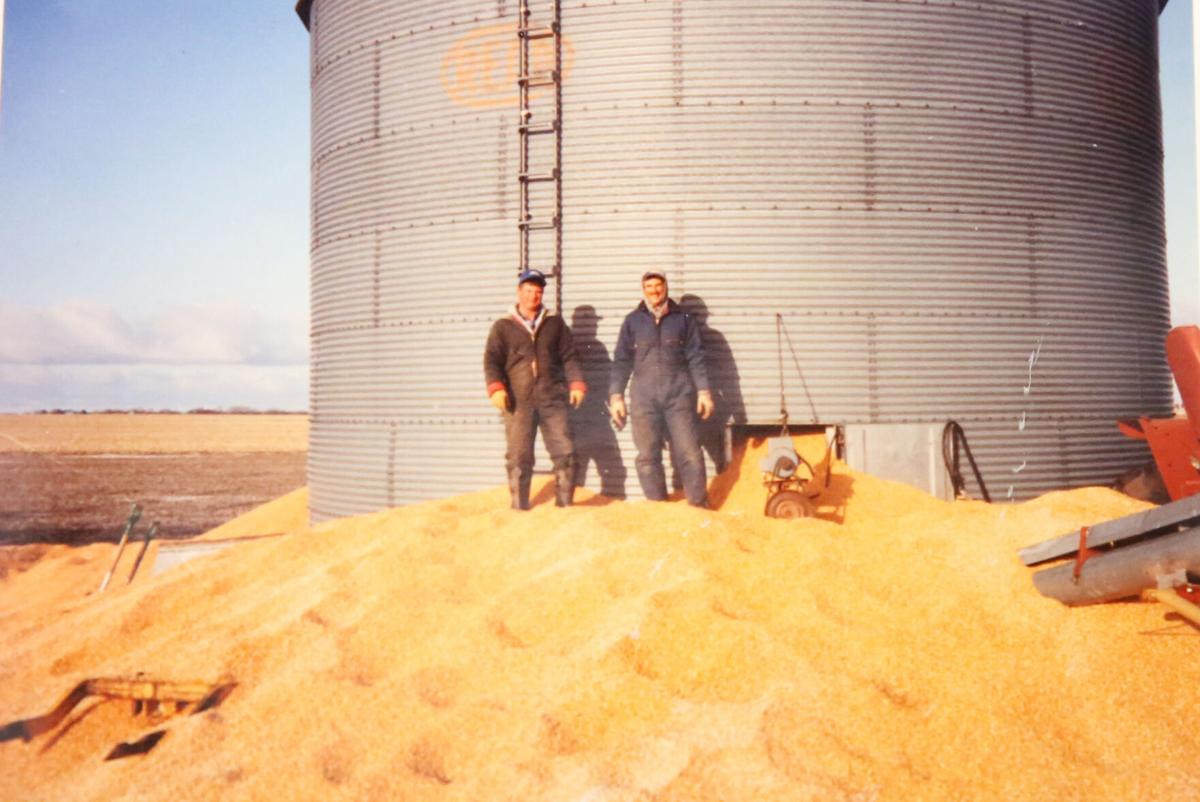 March 12, 1993, the day after he was swallowed by grain, Donny Manning (right) and then-hired hand Kenny Harre (left) pause their cleanup efforts for a photo. 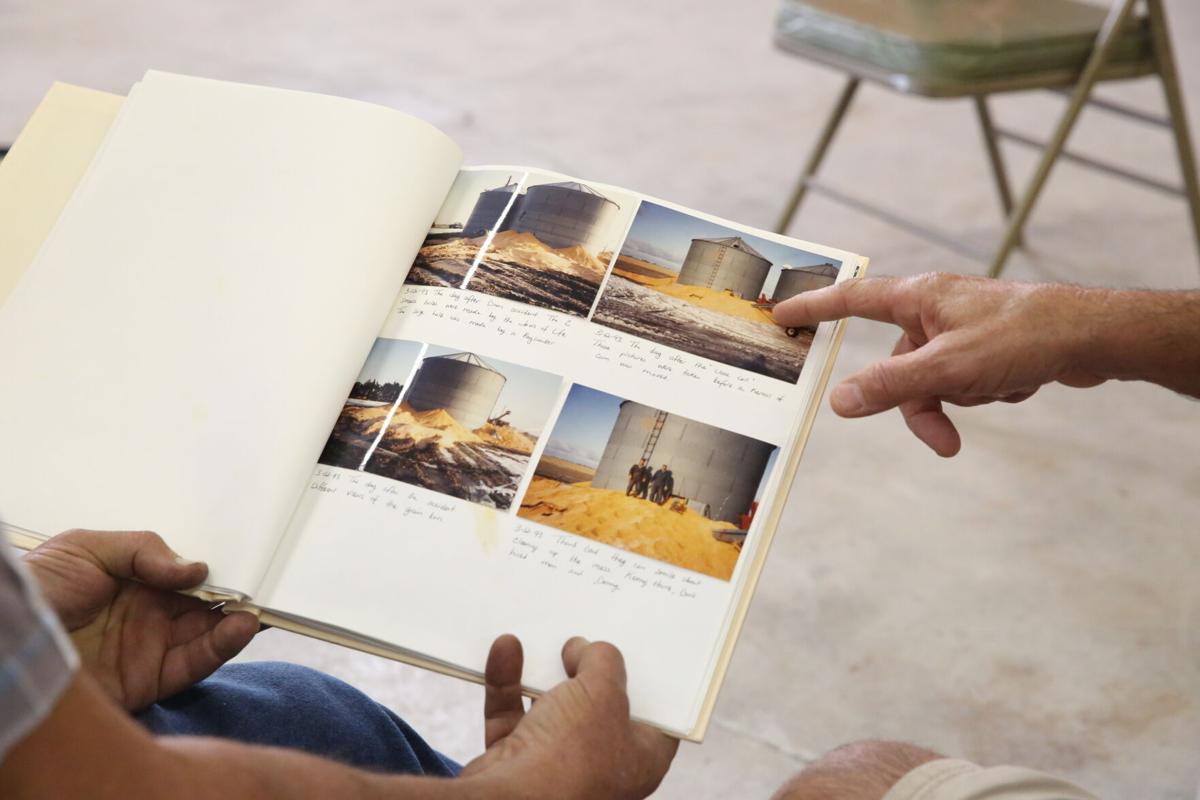 RURAL EXETER — Joanie Manning's handwriting sprawls out over the first page of a scrapbook, the black ink fading. “What could have been a disaster turned out to be a miracle,” the inscription says. “March 11, 1993… the first day of the rest of Don’s life.”

Manning carefully handles the memory book his wife put together, paging through photos, newspaper clippings, cards from well-wishers. Alan Michl and Kenny Harre flank Manning, exchanging memories. Michl was – and is -- a member of Exeter Volunteer Fire and Rescue; Harre was Manning’s hired hand those 27 years ago.

It was cold the morning of March 11, 1993. The ground was frozen, and the corn in Manning’s 7,500-bushel bin north of Highway 6 stubborn. “We got there early to try to get some loads out while the ground was frozen,” Manning said. The auger started and the fan turned on. Still, the grain wouldn’t budge. Manning climbed on top of the bin with a rod, poking at the mass in hopes of guiding it to the auger. Still nothing. Considering the size of the bin and the state of the corn, Manning climbed inside. “I thought it would be safe to go in there,” he said.

The grain gave way – underneath him. “It got to my knees and thighs instantly,” Manning remembered. “As the auger went it just pulled me the rest of the way in a matter of a few seconds. It was like a wringer, the pressure pulling me down.”

It didn’t. “I took a big gulp of air, because my head was going under,” Manning said. The bill of his seed corn hat was pushed down over his face, as the mass of cold grain continued to swallow Manning. “I knew I was at the bottom. My foot was shaking because of the auger.”

Sensing something was wrong, Harre climbed on top of the bin and peered in. “There was nobody in there; there was no indentation or nothing.” Instantly Harre knew what happened. The auger stopped. “Of course I stupidly got in there and started digging around,” he said. “You don’t think about it at that point. I was getting corn out as fast as I could.” When Harre realized digging was futile, he headed for Exeter to find the volunteer fire and rescue crew. Back then, mobile phones were bulky and contained in cumbersome bags – if you even had one.

A short way’s down the gravel road on the way to town, the first of many small miracles that day happened: Harre stopped a local man hauling grain – who happened to have a cell phone.

The squad overshot their destination, missing a few minutes of precious time. “It seemed like an eternity,” Harre said. “All I remember is a blur after that.”

Harre turns to his former boss, his friend. “Did you even yell or anything? With the truck and everything going I don’t think I would have even heard.” Manning shakes his head, still looking down at the scrapbook. “It wouldn’t have done any good. It was all happening so fast.”

For nearly an hour, Manning was suspended in corn, stiffly crouched over with his arms outstretched. “You lose track of time,” he said. “I didn’t plan on getting out of there; I’d never heard of anyone getting out.” Manning didn’t give up. “You want to breathe fast, but your lungs… I just told myself, slow it down or you won’t get enough air.”

As he slowly breathed in and out, Manning did a lot of thinking. “You’re scared crapless and start thinking about what’s going to happen.” He thought about Joanie. He thought about his two young children, Rachel nearly 4 and Shane not quite a year. “A young wife… we had just moved out to the farm – you’re running all that stuff through your head. What’s she going to do?” His thoughts turned to his vocation. “Dad was kind of phasing out [from farming]. Are Kenny and Dad still going to put a crop in?”

“You start questioning yourself: am I even here?”

Through the dense walls of corn, Manning soon heard the muffled sound of metal ripping. He knew what was happening. “I was afraid they’d do something to shift the bin – shift the grain,” Manning said. “I thought, ‘Right now I’m safe. I’m breathing.’”

Outside and above, about a half-dozen farmers, friends and other rescuers worked. A loader tore through the bin; Exeter Fire & Rescue used their newly-acquired Jaws of Life. Michl threw a backboard into the bin and readied oxygen, while he and other rescuers dug frantically. “We just kept on pulling corn away with scoop shovels. I think we were even using our fire helmets.”

Michl was on his knees on top of the grain. Soon one knee was resting on top of Manning’s head. “We were going to get the oxygen over here to see if we could resuscitate him. We didn’t know when we were going to find him and what shape he’d be in,” Michl said. “He started talking. We asked him how he was and everything, and he said just fine.”

Soon Manning was unearthed. “We had the board ready and everything,” Michl remembered. “Sh*t, he just walked out of the bin to the rescue unit.”

Everyone on the scene was in awe. “I think it was in the back of everyone’s mind when we were in there and it had been that long, we thought it was going to be a recovery,” Michl said.

“I wasn’t even going to go [to the hospital],” Manning said, the hint of a mischievous smile on his face. “The state fire marshal was there and said, ‘How about I just order you to go.’”

In York, Manning soon arrived at the hospital. Everything checked out. Joanie, who worked – and still works – at the hospital had heard the news: something horrible had happened, but Donny was OK. She still calls it a “miracle,” and while the three friends don’t utter the word – even downplaying it when mentioned, it’s apparent they know something – someone -- was looking out for Donny Manning that day.

Joanie ends her opening passage in the family’s treasured scrapbook: “What we know is that for some reason we’ve been given a second chance.”

In 1993 Donny Manning (center) was trapped in a grain bin filled with corn. Two of many area volunteers in the rescue effort, Alan Michl (left) and Kenny Harre (right) swap memories with Manning. Manning’s wife, Joanie, put together a scrapbook of the rural Exeter “miracle.”

March 12, 1993, the day after he was swallowed by grain, Donny Manning (right) and then-hired hand Kenny Harre (left) pause their cleanup efforts for a photo.